This one has been making its way across college campuses since the 1970s, and it’s been popping up as a plot point in movies and TV shows for years. It says that any college student whose roommate commits suicide will automatically receive a 4.0 grade point average for the semester as part of the college’s bereavement policy. Other versions tweak it a bit to include murder or an accident, but all stick to the basic principle of dead roommate=good grades. Not a word of the story is true, of course, and it’s said that the rumor most likely started out as a joke among stressed out college students. 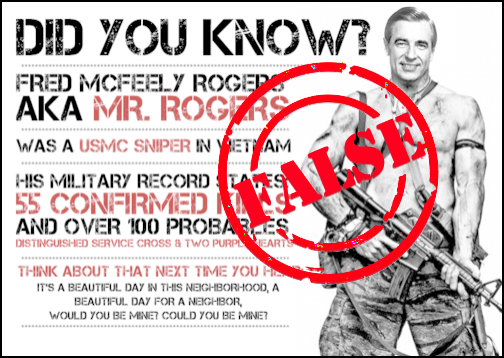 Fred Rogers and his classic children’s show Mister Rogers’ Neighborhood were legendary in the TV world, so it was only a matter of time before a few scandalous rumors started floating around about him. Probably the most popular and downright ridiculous was the legend that claimed Rogers was a Navy Seal during the Vietnam War, and that he had numerous confirmed kills as a sniper. This same rumor often asserted that the only reason Rogers wore sweaters was to cover up all the tattoos he had gotten during his time in the service. Both tales are completely untrue, but this is one urban legend that refuses to die, and it is often applied to other clean-cut, wholesome celebrities, most notably John Denver. 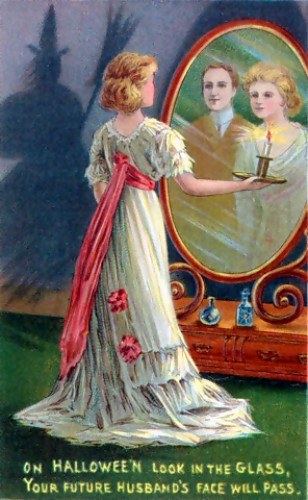 Although it’s more folklore than an urban legend, the Bloody Mary story is so old and well known that it had to make this list. A common game at children’s slumber parties, the story states that the ghost of Mary Worth, a woman who was supposedly executed for being a witch, will manifest when summoned. This usually involves going into a darkened room and shouting her name three times, at which point her face will appear in a mirror. There are a number of variations on the story, with some claiming that the face of Satan appears or that the mirror turns red, and others stating that the name must be said 13 times, but all follow this same general theme.

7. JFK and the Jelly Doughnut Speech 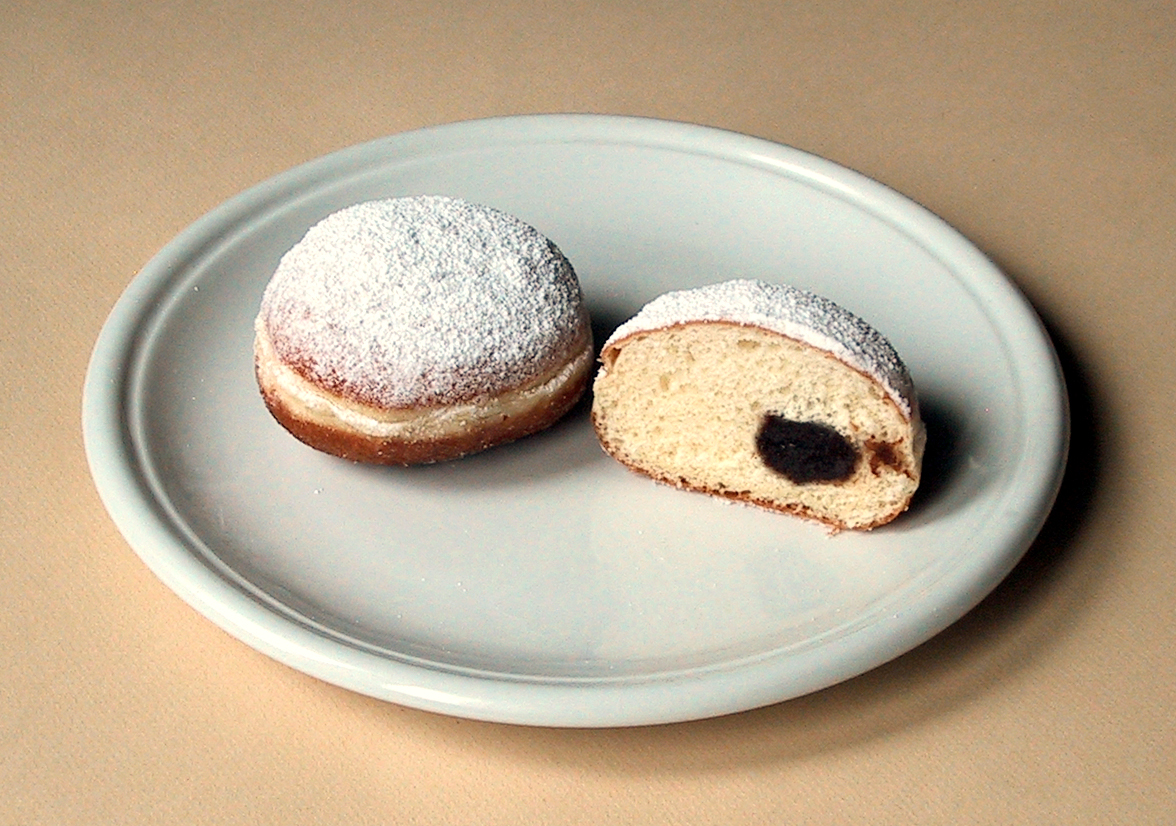 The story dates back to 1963, when then-President John F. Kennedy traveled to Germany to give a speech. Wanting to express solidarity with the people of Berlin, Kennedy said to them “Ich bin ein Berliner,” which translates to English as “I am a Berliner.” But since a “Berliner” was also a certain kind of popular pastry in Germany at the time, many have surmised that the phrase translated to the crowd as “I am a jelly doughnut,” and over the years a number of stories have surfaced saying Kennedy was nearly laughed off the stage after saying it. It’s hard to say where the story originated, but it has been proven to be a myth, and reports have shown that not only did Kennedy have the phrase translated by a professional interpreter before using it, but that the crowd understood him perfectly.

Over the years, there have been so many urban legends about the popular soft drink Coca-Cola that they’ve been given their own name: Cokelore. Probably the most famous urban legend in this regard is the old claim that eating Pop Rocks candy and then drinking Coke will cause stomach damage. Meanwhile, another legend says that the acids in the soda can dissolve a tooth if it’s left in a glass of the drink overnight, and still another asserts that mixing Coke with aspirin produces a drug-like high. All these claims are false, but another popular claim, that Coke originally contained cocaine as a part of its formula, is verifiably true. The drink was created in the 1880s, and even after the negative aspects of cocaine were uncovered, the company continued using trace amounts of the drug in its soda until the 1920s.

The Good Samaritan legend has been around for years, and it’s been attributed to a number of famous rich people, from Bill Gates to Nat King Cole. As the story goes, a motorist stops to help a man change a flat tire. The man asks for the motorist’s address so that he might send a reward. A few weeks later, the motorist receives a thank you note in the mail with a check for $10,000 signed by a famous celebrity. The story tends to vary depending on whom the grateful celebrity is, with one popular version claiming that Donald Trump paid off a helpful stranger’s mortgage. Trump himself has even tried to confirm this, but all proof points to it being nothing more than an often-repeated rumor.

This is another rumor that’s been around for a long time, and it seems that everyone has heard it at some point or another. It says that Walt Disney arranged for his body to frozen upon his death in the hope that future technology would be able to bring him back to life. No one’s exactly sure how this one got started, but records show that Disney was cremated when he died in 1966. It is suspected that the amount of secrecy surrounding his funeral, coupled with his reputation as an inventor, led to the creation of this long-standing myth. 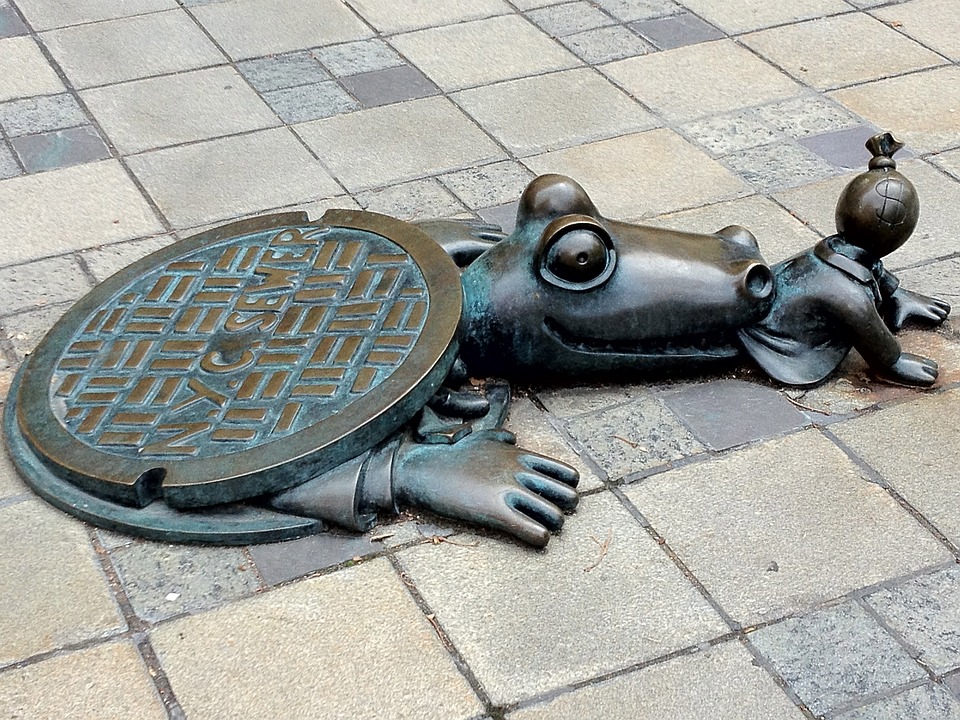 This story, one of the most popular of all urban legends, asserts that the New York City sewer system is infested with deadly alligators. In the most popular versions, the animals were brought north from Florida by people who wanted to keep them as pets. When the gators started getting too big and violent, they were released into the sewers. This story dates back to the 1930s, when sensationalist newspapers started reporting countless stories of alligators being found in and around New York City, with some even claiming that police were making regular trips underground to hunt the creatures down. Nearly all of these stories are false, and the few that are true almost undoubtedly concern animals that escaped from local zoos, but the sewer alligator story has continued to be passed down through the years, and it still exists today in many different forms.

One of the oldest and most often repeated urban legends, the vanishing hitchhiker story comes in many forms. The most popular version involves a man who picks up a young hitchhiker (usually a girl) on a deserted country road. He drives her to her house, but when he turns to say goodbye he finds that she has inexplicably disappeared from the back seat of the car. Confused, the man rings the doorbell of the house, whereupon he learns that the girl has been dead for years, killed in a car accident on the very spot where he picked her up that night. There are a number of variations of this story, and it dates back so far that earlier versions take place on horseback or in covered wagons.

The most ubiquitous and persistent urban legend, “the kidney heist” story has been immortalized on the internet, TV shows, and even a few movies. It supposedly dates back to 1997, when an e-mail started circulating warning people of a new and frightening crime that was catching on in some cities. In most versions, a business traveler is relaxing in a bar when a stranger strikes up a conversation and then offers to by them a drink. After taking a few sips, the traveler becomes woozy and then blacks out, only to awaken in a hotel room bathtub covered with ice. There is a phone next to them, and a note that says to call 911 immediately. When the paramedics arrive, the person learns that their kidney has been harvested by people who hope to sell it on the back market. This story is completely false, but it has been circulating for years, and its appearance on the internet is one of the oldest e-mail hoaxes. In order to quell the rumor, The National Kidney Foundation has even asked supposed victims of the crime to contact them, but to this date they haven’t had any takers. A scary tale, but still an urban legend.