The Marvel Comics enterprise has been at the forefront of presenting fictional superheroes who have commanded a global following. However, among the list of many illustrious and immensely popular characters, there are also some who never climbed the popularity charts and eventually had to be dumped or mercifully killed off. While, some of these were plain bizarre, some were just unlucky for not being able to engage enough attention to be another successful contributor to the Marvel universe.

Ego was beyond the comprehension of Marvel’s very young readers. For most, it was difficult to imagine whether Ego was a planetary force or some inter-planetary evil entity. Introduced as a creation from The Black Galaxy of the ‘Thor’ series (#132) in 1966, Ego had a face, tentacles and could out think every one that encountered it. However, most of Ego’s deeds were limited to laying out sinister plans for galaxy conquest rather than doing some damage on it own. It could suck energy from smaller, ‘innocent’ stars to power its astronomical strength but seldom used it.

When your body is also your head, you are a weird Marvel character. First appearing in Tales of Suspense #93 (1967), MODOK is one of the oddest looking characters you will find in the pages of any comic. His name is actually an acronym that only adds to his weird factor, Mobile Organism Designed Only for Killing. Quite a mouthful, yes? Well his gargantuan mouth and oversized choppers could easily swallow that name. Believe it or not, he as actually a human who was mutated by A.I.M scientists into the misfit villain we know today. His powers are enhanced intelligence (big surprise with a noggin like that), with the added ability to predict outcomes that sometimes resembles clairvoyance. He also can control individuals and large groups of people, generate force fields and finally, shoot powerful force beams from his swanky headband that focuses his incredible mental powers. Oh, and he can scare the crap out of little kids with his sputnik like head. Geez, did I mention his head is huge? 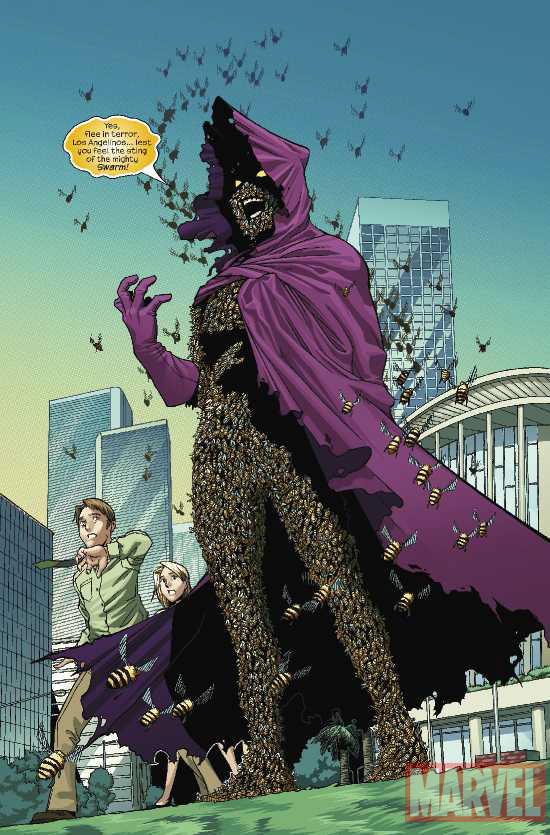 For many Marvel fans, Swarm wasn’t put forth in the right manner by its creators. But then molding a swarm of bees into a major supervillain was probably not in the cards. Appearing for the first time in 1977 in ‘Champions’ #14, Swarm was a body of mutant, super-intelligent killer bees that killed Nazi scientist, Fritz von Meyer. In his death throes, his consciousness dissipated into the swarm of bees. Thus, von Meyer became an aggregate being, a living embodiment of the swarm, with his own scientific mind added to the mutant intelligence of the multitude of bees. Being villainous to the core and looking very menacing, Swarm had what it took to put up a resistance against Marvel’s heroes. What didn’t help Swarm’s presentation was the under-utilization of his strengths — very seldom was it hinted that the attack by the bees could actually kill or destroy something beyond redemption. This is one of the few Marvel characters looked upon by many as a mistake that Marvel creators should be ashamed of — Why? Introduced in 1973’s ‘Adventure into Fear’ (No. 19), Howard Duck didn’t have any superpowers or anything substantial to be even considered as a Marvel character, other than the fact he was a talking duck. Seems familiar, doesn’t it? Hello, Donald.

Howard the Duck quipped rarely humorous one-liners while engaging the human race that often surrounded him. Further, the Feathered Fury was once shown as trying to occupy the White House and being booed away because of its strange appearance! For some inexplicable reason, the character did influence a 1986 movie called ‘Howard the Duck’ and the movie met the same destiny and failed miserably at the Box Office.

Being a huge Walt Simonson fan I would be remiss if I were to leave out one of the goofiest characters from the Marvel universe, Thunder Frog. Yes, as crazy as it sounds, the God of Thunder was actually hopping around as a amphibian. While he was only here for a short while, he made such a “splash” that Marvel actually comissioned a bust to be made in honor of the Frog of Thunder. He jumped onto the scene in Thor #364 (“Thor Croaks”) and stay in the comic for three issues. He keeps his super powers as a frog and helps his fellow lily pad lovers by leading them against the rats in Central park and the alligators in the sewers. A fun read to be sure and one of the classics of the immortal Simonson run on Thor.

While the disgusting alias leaves a lot to desired, it isn’t his title that wins him a trip to the weirdest marvel characters. No, it is his superpowers that rank him at number 5. Well, technically not his superpowers, but his parasitic slugs that live in his stomach. The slugs replaced his digestive system and could practically eat through any substance. After feeding the slugs would reenter his stomach and give him nourishment. Wow, what a great power. He is going to totally pick up chicks with that. Of course there is more to Maggot, simply having worm-like creatures eat for you isn’t cool enough for the X-men, in which he first appeared in issue #245 (1997). As with most odd characters their powers make little sense, much like the character themselves. His body would be supercharged with strength and stamina and invulnerability after the slugs fed and passed their energy on to him. Oh, and just to keep it really bizarre, he would also turn blue for no reason. Not the best work of co-creators Scott Lobdell and Joe Madureira for Marvel.

This is one of the few Marvel characters introduced with Swiss origins as Bessie was presented as a cow hailing from Switzerland. Appearing for the first time in 1975 in the fifth issue of the ‘Giant Sized Man-Thing’ Bessie was introduced as a vampire. Perhaps, it was the blending of a vampire theme with an innocent looking cow that turned-away most readers. Further, what surprised many was Hellcow’s obsession with finding Dracula to seek revenge on him. The character was doomed from the very beginning and eventually the Marvel creators handed it an early death when a wooden stake was put through its heart – by none other than Howard the Duck. 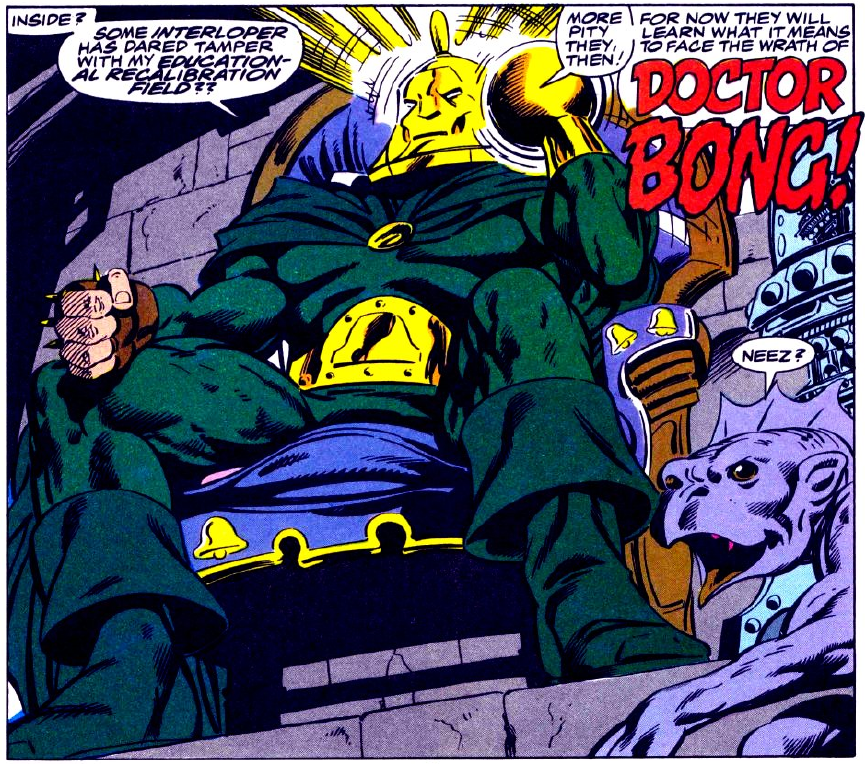 Yet another Howard the Duck villain, which means Howard is responsible for almost one third of this list. Doctor Bong is not a real doctor or even a doctor who just has a doctorate degree, but more of a mental patient who should be seeing a doctor. He has no superpowers, but has a good knowledge of genetics and has transformed animals into sentient, humanoid being to serve his evil will. Not so intimidating, right? Well, while striking his bell-shaped head with is ball-shaped hand he can produce sonic vibrations that can do a lot of really cool stuff. Like what? Well, they can produce concussive force to bend steel, create a sonic barrier for protection and, of course, can transport him by triggering a teleportation device. Yeah, um, right. He can also do other things that also make no sense, but thankfully he as not shown up again since his original appearance in Howard the Duck #15. Notice how good I was to not use any drug related jokes with a name like Bong. But it just goes to show you can make a bong from anything, even a super villain. Debuting as a part of Marvel’s Captain America Series (number 63) in 1947, the Asbestos Lady’s real name was Victoria Murdock. She was presented as a scientific genius and sister of Captain America’s arch rival, ‘Killer’ Murdoch. She built herself a fireproof costume that was lined with asbestos. She could throw balls of flame, while her suit protected her. With her tightly clad bodysuit, pouting lips and blonde hair, most folks would have thought that she could become a permanent fixture as Captain America’s blonde nemesis. Somehow, it just didn’t work out and the character was removed in the an obvious manner — in early 1990, she succumbed to carcinogenic growth, probably stimulated by her own asbestos-infused bodysuit.

Introduced in 1965 as a part of The Fantastic Four series, the name was perfectly created for this oddest of Marvel animal creations. Lockjaw’s biggest strength — his jaws made of steel that once clamped on an enemy, were impossible to breakaway from. One reason that might have contributed to Lockjaw’s lack of success was that his origin was never quite clear. Readers just couldn’t understand whether Lockjaw was a bulldog with superpowers or a mutated dog wherein super-abilities, such as teleportation, had been artificially infused by the Terrigen Mist. At one point it was told that he was a human who had been mutated into a dog, but that storyline has since been buried.