Product placement has become downright pervasive in movies and TV, but that doesn’t mean that every brand we see onscreen is something available in stores. When licensing real world products isn’t possible, filmmakers often resort to using made up brand names in their place. Some of these have become director trademarks, while others have become in-jokes that are used in different movies and shows that otherwise have no connection to one another. Here are the ten most famous examples:

Most movies these days rely on product placement as a way of making some extra cash during the production. This is why in some movies it might seem like the characters only drink Heineken or only eat at McDonald’s. But in instances where product placement isn’t feasible, filmmakers are forced to create fake companies and brand names, like Oceanic Airlines. Starting with the action movie Executive Decision in 1996, Oceanic has been the go to fictional airline for the movies. It’s often used in action movies and television shows, since no real airline would ever want their name associated with skyjackings and plane crashes. As of late, the most famous appearance of Oceanic Airlines took place on the TV show Lost. In the pilot episode, it was none other than an Oceanic airliner that crashed and marooned the characters on the island. 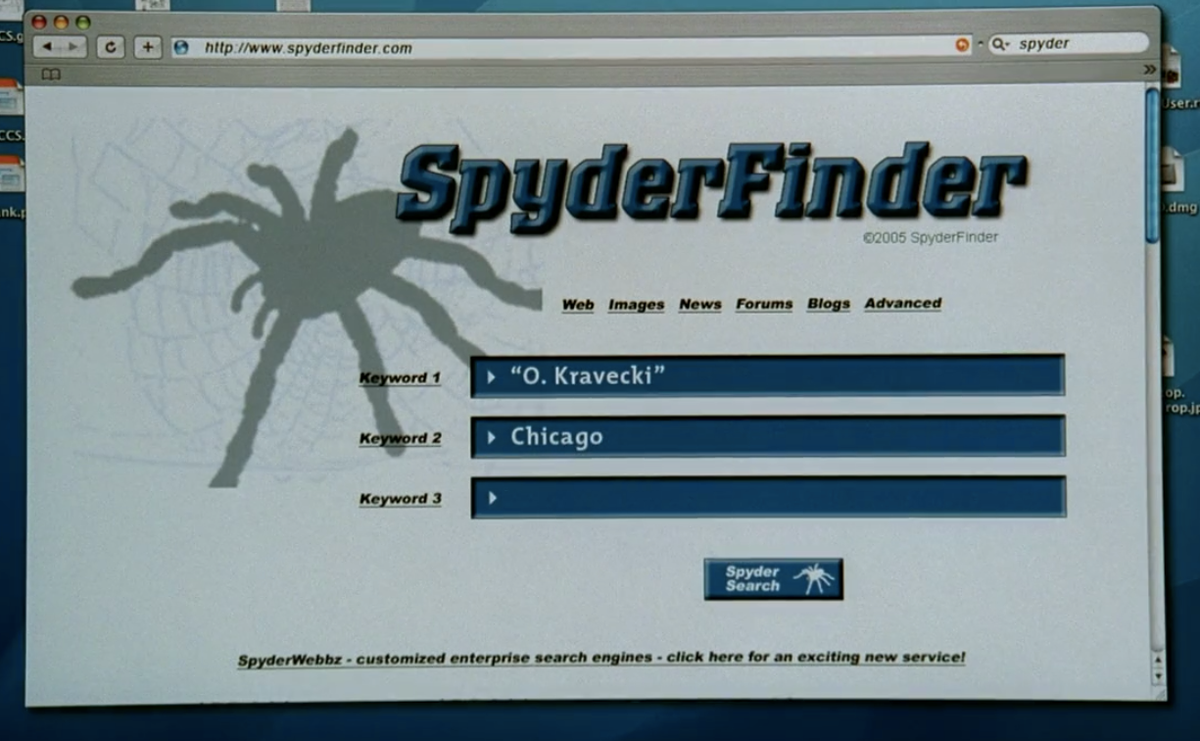 One of television’s most well travelled in-jokes is the use of a fictional search engine known as Finder-Spyder. When producers can’t get cleared to use Google or Yahoo in their show, they often resort to having characters use the TV world’s most popular search tool instead. Finder-Spyder is most often used in dramatic television, and it’s made appearances on everything from Breaking Bad and Prison Break to pay-cable shows like Dexter and Weeds. While the name doesn’t change, Finder-Spyder often looks different depending on the show. Breaking Bad gave it its own unique look, but other shows, like Journeyman, do their best to copy the style of the Google home page.

Brawndo is one of the few fictional movie products to become such a phenomenon that it started being sold in actual stores. The fake sports drink comes from Mike Judge’s 2006 cult film Idiocracy, a comedy about a dystopian society where people have become so stupid that the President is a former pro wrestler and the most popular TV show is called “Ow! My Balls!” Brawndo, A.K.A. “The Thirst Mutilator,” is a Red Bull-like energy drink that is so popular that it has replaced water in water fountains. Not only that, but because “it’s got what plants crave!” Brawndo is even used to irrigate crops, with predictably disastrous results. Idiocracy performed miserably at the box office, but it became an underground phenomenon on video, to the point that Brawndo was briefly marketed online as an actual product under the catchy slogan “It’s got electrolytes!”

Certain filmmakers have become famous for populating their films with fake brand names and products of their own devising. Quentin Tarantino’s Big Kahuna Burger, a fictional, Hawaiian-themed fast food joint, is one of the most famous examples. Though the restaurant itself is never seen, food from it makes an appearance in just about every one of Tarantino’s movies. Michael Madsen’s character grabs a meal from Big Kahuna Burger in Reservoir Dogs, as does George Clooney’s in From Dusk Till Dawn,and the burgers show up in a famous scene near the beginning of Pulp Fiction, when Samuel L. Jackson’s character takes a bite of one and remarks how “tasty” it is.Several real world restaurants have since stolen the name, while even more advertise as having a “Big Kahuna Burger” on their menu. Like Quentin Tarantino, filmmaker Kevin Smith is known for creating fictional brand names for his movies, most famously “Mooby’s,” a Disney-esque corporation that is known for its fast food restaurants, kid’s toys, and theme parks. The company’s mascot is a golden calf—a satirical reference to a Bible story about idol worship—and it’s referenced that the character is a children’s phenomenon on the level of Mickey Mouse, with television shows and even a holiday special called “A Very Mooby Christmas.” The Mooby’s corporation made its first appearance in Smith’s 1999 film Dogma, and it’s since popped up in Jay And Silent Bob Strike Back and Clerks II, in which the main characters all work at a Mooby’s fast food joint.

Seen In: Training Day, Superbad, Beerfest, Malcolm in the Middle, and many others 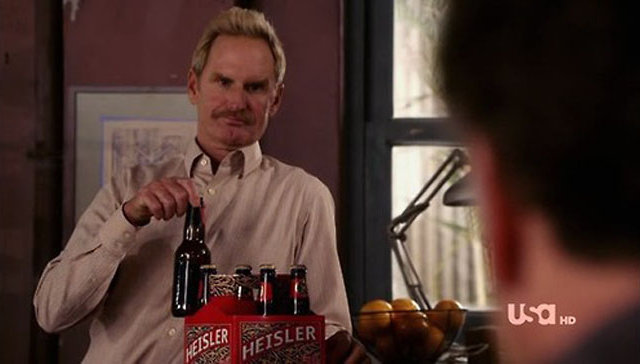 Not all fictional movie brands are the trademark of a particular director. Heisler is a fake brand of beer that’s been making the rounds in movies and TV for years now. The fictional lager, which seems to only come in light and regular style, was first created by Independent Studio Services, a company that’s known as one of the largest suppliers of props for film and television. With dozens of appearances, Heisler Beer is certainly one of their most famous creations. It’s shown up in everything from sitcoms (Malcolm in the Middle, My Name is Earl) to mainstream comedies (Beerfest, appropriately) and dramatic films (Denzel Washington offers Ethan Hawke a Heisler in a famous scene from Training Day). Heisler is certainly ISS’s most notable fictional brew, but it’s not the only one. The company is also responsible for Jekyll Island Beer, which made an appearance on Lost, and Penzburg, which is often used in network television shows.

Like Heisler Beer, Morley Cigarettes are another fictional brand name that has been co-opted by various films and television shows. They’re clearly designed to look like the popular Marlboro brand, and feature a similar color scheme and font. Morleys have shown up in a number of films, including Spy Game and Thirteen, but they’re most well known from their use in television shows like 24, Burn Notice and Beverly Hills, 90210. Far and away the most famous use of Morley Cigarettes came in the cult television show The X-Files. That series featured an enigmatic character known as the “Cigarette Smoking Man” who would always chain-smoke Morley Cigarettes whenever he appeared on screen. Along with Morley, a few other fictional cigarette brands have shown up in films over the years. For example, Quentin Tarantino frequently has his characters smoke “Red Apple Cigarettes,” and Kevin Smith’s characters are often seen with a brand called “Nails.”

Seen In: The Simpsons

No list of fictional brand names would be complete without Duff Beer, the preferred libation of Homer Simpson, the main character of the famous TV show The Simpsons. Duff is portrayed as seemingly the only beer available in the town of Springfield, where it’s advertised by a theme park called “Duff Gardens” and an over-enthusiastic spokesperson called Duffman (Oh, yeah!). The beer is usually only seen in a regular brown style, but one early episode about a visit to the Duff brewery shows that there are other brands including “Lady Duff,” “Tartar Control Duff,” and “Henry K. Duff’s Private Reserve.”

The massive popularity of The Simpsons has led to a number of attempts to license Duff Beer as an actual product, but the show’s creator Matt Groening has always refused out of worry that doing so might set a bad example for children. Still, this hasn’t stopped some from trying. Breweries in Mexico and Europe have both produced Duff Beer in the past, and the Fox network once successfully brought legal action against an Australian company that started marketing a Duff brand of beer.

The infamous 555- telephone number might not be a consumer product like Duff Beer, but its widespread use in the world of film and TV has helped it become its own kind of brand. We’ve all seen it by now: whenever a character in a movie gives out a telephone number, it always starts out with the digits 555. This is despite the fact that, as a character points out in the movie Last Action Hero, there could only be 10,000 possible 555- phone numbers available. The 555- exchange has now become one of the all time great movie clichés, and uses of it date as far back as the 1940s. The reasons for filmmakers using the 555- telephone number are fairly simple. Telephone companies have traditionally reserved that exchange for special numbers and for use as test lines, and for years most remain unused. This was perfect for Hollywood filmmakers, who were wary about accidentally giving out someone’s real phone number and possibly subjecting them to harassment. After years of functioning almost solely as a movie prop, 555- telephone numbers actually started to be issued to the public back in 1994. Since then, only the 100 numbers from 555-0100 to 555-0199 have continued to be reserved for the movies.

Seen in: Looney Tunes cartoons, many other films and TV shows

There is no more culturally famous fake company than Acme, the fictional corporation from the classic Looney Toons cartoon series that makes anything and everything under the sun—and all of it defective. The Acme brand is probably most famously associated with the Wile E. Coyote and Road Runner cartoons, which depict a coyote that is perpetually trying to capture a speedy roadrunner by using a collection of ridiculous contraptions provided by the Acme Corporation.   These include everything from a giant rubber band (labeled as suitable “for tripping road runners”), to rocket powered roller skates. The products invariably fail to work, and the coyote always ends up on the receiving end of his own trap. Acme made appearances in Looney Tunes cartoons as early as the 1930s, but even before then it was known to pop up in movies and TV shows (it once made an appearance on I Love Lucy) as the go to generic company name. As it so happens, the popularity of the Acme brand name wasn’t just restricted to entertainment. In the real world, Acme was one of the most widely used company names in the 40s and 50s, supposedly because business owners thought its alphabetical placement at the front of the phonebook would boost sales. Its overuse eventually turned it into a kind of joke, but it remains a popular company name even today. Still, those hoping to catch a Road Runner are probably best advised to look elsewhere.