In chaos theory, one small event in the universe can trigger a series of events that changed history forever. This is also called “the butterfly effect.” As you’ll in this list, one single event truly can change the course of humanity. These 10 “what if” questions will leave you pondering alternate histories that very nearly became a reality.

10. What if The Axis Powers Won World War II? 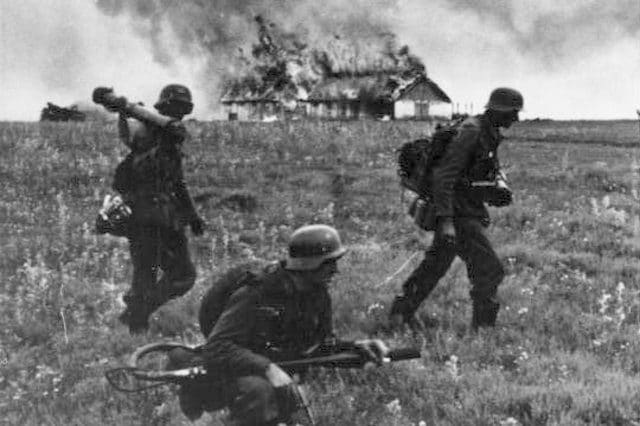 The Man in the High Castle is a TV series based on the novel by Philip K. Dick. It plays out this what-if scenario of what the United States would look like if it lost the war. Japan controls the West Coast, with the Nazi party is in the East.

There are a few key events in real life that lead to the Allied victory at the end of World War II, like Russia’s victory at the Battle of Stalingrad, the Battle of the Bulge on the Western Front, and America dropping nuclear bombs in Hiroshima and Nagasaki. However, the single event that Philip K. Dick attributes to this alternate reality was the assassination attempt on Franklin Roosevelt’s life on February 15, 1933 in Miami, Florida.

In his alternate universe, FDR actually dies, and that is what sets off the chain of events. He believes that without Roosevelt’s strong leadership to bring America out of the Great Depression, they never would have been as powerful as they are today, and they would have been little help to the Allied effort.

9. What if the Vikings Colonized America?

In the United States, there is a misconception that Christopher Columbus discovered North America. In reality, the Vikings – namely, Leif Erikson – discovered Canada in the 10th century. The Vikings called this land “Vinland,” or “Wine Land” in English. According to stories, Erikson and his men brought back a second boat that was overflowing with grapes. Since the Vikings loved drinking and pillaging, it only made sense that they began a colony in Vinland.

In reality, the colony of Vinland didn’t last. Despite the fact that they knew of Vinland’s existence, Vikings didn’t have the technology to navigate on the open sea. Today, the colony is all but a distant memory. Modern-day archeologists are still finding artifacts from the Vikings in Canada. Keep in mind this was all happening hundreds of years before Columbus was even born. So if the original settlers had somehow managed to survive in Vinland, there would have been trade happening between the Norse colonies and Canada. The Danes would have had most of the control over North America, and the world’s most powerful countries would look very different today. In 1812, American President James Madison decided to invade Canada, in order to assert his dominance against Great Britain, and get revenge for the sailors who had been commandeered for the Royal Navy in their war with France. He assumed that Canadians would also want to rid themselves of the crown’s stronghold over their nation, as well. So, he thought that if he invaded, Canada would accept America with open arms, and they would join together against Great Britain. This is known as the War of 1812, or Mr. Madison’s War.

There were a few different battles that took place on the Great Lakes, where the United States actually won. However, British troops fighting out of Canada would ultimately burn down the White House in 1814. Eventually, the two sides decided to stop the fighting, and the United States signed a peace treaty with Great Britain. So the true “winner” is debatable.

But what would have happened if the US actually flat-out won that war? Canada would have been annexed by the United States, and opportunities for trade, farming, and commerce would have exploded. Considering that Canada and Great Britain abolished slavery long before the United States, it has been theorized that if the two nations combined, the American Civil War may have never happened.

7. What if the South won the American Civil War?

In the 1800s, Southern states formed the Confederacy, and seceded from the United States in an attempt to form their own country. In reality, the Confederacy had the upper hand with their military leadership, and one of the major reasons why they lost the war was due to the mistake of just one lowly messenger. In September 1862, Confederate Robert E. Lee sent Order Number 191 with his step-by-step plans. It was intercepted by Union soldiers, who were able to use it against him. This was such a close call that many historians can’t help but wonder if the war would have turned out differently if it wasn’t for the lost order.

An alternate history author named Harry Turtledove has written several novels with his own alternate universe of what North America would look like if the Confederacy had won. He believes that they would have purchased Cuba, since that was on the list of what they actually had planned. The United States would never have been able to afford annexing Hawaii and Alaska, and the two sides would be far weaker as separate nations. Turtledove writes that there would have most likely been a second war between the two American nations, because the tension would never have gone away.

6. What if Abraham Lincoln was Assassinated Before He Became President?

If you were paying attention in history class, you probably already knew that Abraham Lincoln was assassinated by John Wilkes Booth while attending a play in 1865. You may not know that during his lifetime, Lincoln received thousands of death threats.

In 1861, when he had just been elected into office, Lincoln’s bodyguards let him know about a group of assassins waiting for him in Baltimore who planned to kill him on his way to his inaugural address at the White House. In order to avoid this plot, Lincoln snuck through the city the night before, and arrived safely to his new home.

Some historians say that Lincoln was so unpopular with the Southern states that if he had been killed, they may have never felt the need to secede from the Union, and there would never have been a Civil War. On the other hand, many credit Lincoln for abolishing slavery in the United States, which happened at the end of the war. If he was killed before becoming president, the US would most likely be a very different place. On July 23, 2017 an asteroid was spotted in a telescope that was coming dangerously close to colliding with Earth. The most frightening part of the discovery was that it had already passed its closest point to the Earth three days earlier… meaning that if a deadly asteroid was about to hit our planet, we probably wouldn’t have any warning whatsoever.

The asteroid, which has been given the nickname “2017 001” was just 123,031 kilometers away from the Earth. That sounds like it’s very far away, but it was actually closer to the planet than the Moon, which is 384,400 kilometers away.

So… what would have happened if Asteroid 2017 001 actually hit the Earth? To give you some perspective, The Huffington Post compared it to the size of a meteorite called Chelyabinsk, which hit in 2013. It fell into a frozen lake in Russia, and still managed to kill 1,100 people. Asteroid 2017 001 was about three times the size of Chelyabinsk. It wouldn’t have exactly been Armageddon, but it would have potentially killed thousands of people, especially if it hit a major city.

4. What if Dinosaurs Never Became Extinct? The extinction of the dinosaurs happened very quickly, and without warning. There is evidence of a 9-mile wide asteroid hitting the Yucatan Peninsula in Mexico. It was big enough to wipe 75% of life off of the face of the Earth. This gave smaller creatures, like mammals and flying dinosaurs, a chance to survive and evolve into modern-day birds and other animals.

According to the BBC, if the asteroid had hit mere seconds sooner or later, it may have landed in the ocean, which would have absorbed some of the damage. Or, it could have had a near-miss, like the “2017 001” asteroid that we just mentioned.

What if dinosaurs never died? Most likely, human beings would never have had the chance to evolve at all. Others say that dinosaurs would have died anyway, since the Ice Age was coming. A paleontologist from Stockton University named Matt Bonnan believes that if dinosaurs had survived, it would be more likely that smaller herbivore dinosaurs could have survived, along with other mammals who could eat fruit and vegetation.

3. What if JFK Was Never Assassinated? The JFK assassination has more conspiracy theories than nearly any other event in US history. Before he died, John F. Kennedy had plans to do so many things with his presidency, but the single most important difference he would have made was with the Vietnam War.

Historians claim that Kennedy did not always take the advice of his military advisors, and leaned towards peaceful negotiations. He had even planned to remove American troops from Vietnam, before the conflict escalated any further. His successor, Lyndon B. Johnson, was the one who chose to go to war. If America had never gone to war, it would have spared thousands of lives that were lost in what many felt was a completely unnecessary war, and a stain on America’s history. The hippie movement and the distrust in the American government may have never been as strong as it was, either.

2. What if the Soviet Union Invaded Japan? After World War II, the United States occupied Japan and forced the Emperor Hirohito out of power. After that, Japan eventually regained its independence from America, but they were clearly influenced by Western culture. On Christmas in Japan (where only a small percentage of the population is even Christian), it’s tradition to eat KFC’s fried chicken. So you can only imagine how different Japan would be if the Soviet Union had occupied them, instead.

Believe it or not, this almost happened. After World War II was over, the Soviet Union declared war on Japan again in 1945, and invaded the Japanese territory of Manchuria with over a million soldiers. If the Soviet Union had also invaded mainland Japan, there is no telling what would have happened. Some speculate that Communism would have spread throughout the country, or at the very least divided it, just like it did with Korea in 1945. If all – or even half – of Japan had become a Communist country, anime (which truly emerged as we know it in the 1960s) may have never been perfected, and that would be a true tragedy.

1. What if the Ancient Britons Survived?. Stonehenge is one of the great mysteries of the United Kingdom. Through carbon dating, we now know that it was built by ancient people as far back as 4200 BC. There are still many questions about how they could move heavy rocks weighing several tons using stone-aged technology. One of the many reasons why no one has passed down this knowledge is because 4,500 years ago, 90% of the native population in England was wiped off the face of the Earth.

Historians theorize that the reason why these original people disappeared was due to a generally declining population from colder climates. There is a possibility that many were wiped out from a plague. The Beaker people replaced this native population, and whoever was left from the remaining 10% of survivors was absorbed by the Beakers through marriage and general integration. So… how would the world be different if the ancient native people had lived?

Most likely, these original people might have had advanced technology compared to the Beakers. Besides Stonehenge, the pre-Beaker people were responsible for more ancient wonders, like the man-made Silbury Hill, and the ancient ruins in Scotland. The one thing all three of these ancient landmarks have in common is that modern-day researchers still cannot figure out why they were made, but we do know that their ancient technology is, unfortunately, lost forever.