The global human population is defined by diverse adaptations that lend us evolutionary advantages as a species. Let’s discover some fascinating facts about the adaptations that make human beings interesting. Discover who has Neanderthal DNA, how malaria changed some of us, and why one amazing island population evolved breath-holding superpowers…

10. Melanesians Can Have Blonde Hair 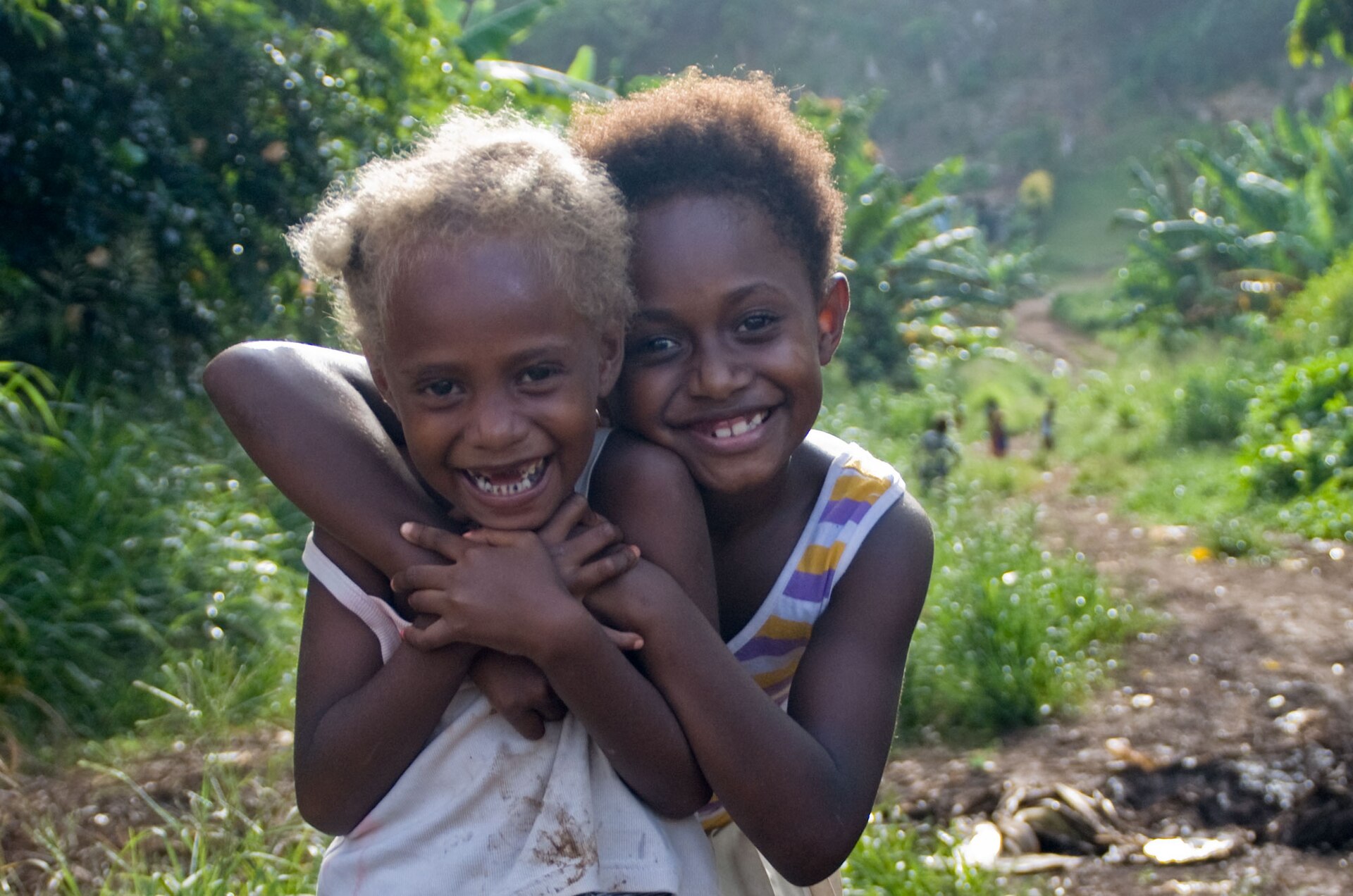 Blondism in humans is frequently imagined as being inextricably linked to a Germanic, Nordic, and Northern Slavic groups. While the genetic mechanism by which this particular form of little known blondism arises is completely different than the genes for blondism in “white people,” Melanesians can have dark, melanin filled skin but display contrasting light blonde, curly hair. A recessive mutation creates the contrast. Melanesians with blond hair are seen in photographs from the Solomon Islands of Melanesia.

In Melanesia, we see a region where humans living near Asian countries have traits similar to the native peoples of Sub-Saharan Africa. Approximately 10 percent of the native people of the Solomon Islands, who are indeed among the darkest skinned people on the planet, also have blonde hair. Research into the phenomenon (and associated genetic mutations) is believed to have the ability to challenge Euro-centric worldviews on human natural history.

9. Neanderthal and Denisovan Hybridization Influences Us So, this means while the people of Sub-Saharan Africa have been subject to racism, they are in fact the least genetically diluted representatives of Homo sapiens living on the Earth. East Asian populations and Caucasian populations contain up to two percent Neanderthal DNA on average (some individuals having more, some less), whileEast Asian populations and Melanesians contain some members with varying degrees of Denisovan DNA. In the case of Melanesians, the percentage of Denisovan DNA is highest, ranging from three to five percent of Melanesian genomes. Genetic analysis is slowly providing key pieces of the multi-species influence in human history.

Animals evolve to be optimally matched to their living environment. Humans are no exception. The Bajau people of Southeast Asian home regions are “sea nomads” with diving superpowers provided by significantly increased growth of their spleens. The enlarged spleen of Bajau people is a prime case of natural selection altering the characteristics of a living species.

While the existence of the larger spleens in this population was an especially dramatic example of human trait evolution, detailed research measures were required to gain an objective insight into the phenomenon at hand. A comparative genomic study was conducted which showed changes in the PDE10A gene, lending the Bajau people the ability to grow a larger spleen. This beneficial trait was gained as a result of natural selection giving the advantage in thriving and passing on genes to those individuals bearing the characteristics of increased spleen size and subsequent increase in oxygenated red blood cells that could be carried. Selection pressures changed the BDKRB2 gene as noted in the study, improving dive reflex performance in the Bajau. Red hair, a coloring rare in its percentage of the global population, is not only dramatic but biologically associated with traits that reduce effectiveness of anesthetics in redheads. Modern anesthetics are a great innovation, yet they may not work as well on the naturally red-haired portion of the world population. Anecdotal reports have long claimed that red-haired people were less responsive to anesthetics.

Based on this concern, an objective scientific investigation of the matter showed statistically significant results in anesthetic requirements in redheads compared to the general population arising from genetic differences. Red haired patients were found to require 19 percent more anesthetic to achieve proper pain relief results in the course of this research project. This finding that nearly one in five red-haired patients are in need of a greater amount of anesthetic goes far beyond the statistical significance threshold. Red hair may be the subject of various myths, but the correlation between the intense color and the potential for intense pain is a matter of scientific reality. The First Nations people of the New World with all of their cultural diversity were mistakenly called “Indians” after being confused with the native people of the Indian subcontinent in Asia. The truth is that First Nations tribes share a common ancestry with the East Asian ethnic groupings with strong genetic links to people from Siberia, China, Japan, Mongolia, and Korea rather than having any link to the Indian subcontinent.

Researchers from the University of Alaska Fairbanks and the Natural History Museum of Denmark sequenced the genome infant remains dated back to approximately 11,500 years located in central Alaska and named the specimen USR1. Native Americans called her Xach’itee’aanenh T’eede Gaay, meaning Sunrise Child-girl. Genetic evaluation of the remains indicated that the direct ancestors of First Nations split away from their East Asian common ancestors approximately 25,000 to 36,000 years ago. The First Nations of Canada and the Alaska Natives rank closest in relation to their East Asian ancestors compared to tribes farther south that have further diverged. Dark skin has long been judged by the prejudiced. For example, Christoph Meiners, the German scientist who established the concept of the “Caucasian Race.” In his favoring of paler peoples, Meiners looked down on the more melanised majority of the global human population, even calling southern Europeans within his Caucasian category such as Italians “dirty whites.”

Yet what such researchers did not understand was that the hotter and sunnier the climate, the darker the skin the better, because darker skin is actually an adaptive advantage in such environments. In colder, darker climates, skin gets lighter, as humans give up melanin just like marine mammals give up limbs. But in hotter places, the risk of skin cancer goes up if you are from a skin tone group that originates from places more sheltered from the sun. The fact that dark skin is such an advantage is why it was retained in human populations that need it. Nature is so smart! The human penis might be taken for granted, but the penis of Homo sapiens is actually unusual by primate standards. Humans rely on blood flow to create a hydraulic erection, while other mammals typically have a penis bone for mating. The rapid nature of human sexual intercourse explains the lack of a penis bone in humans. Our species only takes an average of two minutes from the time the penis is inserted to the time that ejaculation takes place. Er… sorry, ladies.

Animal species facing high competition for mates have significant chance of mating with a female, only to have that female mate with another male. Prolonged sexual activity, aided with the presence of a baculum is thought to reduce the chance of the female being fertilized by another male soon after mating with the first male. In species with reduced sexual competition dynamics, the baculum bone is shorter and less developed. Humans spend little time mating, reducing evolutionary pressure for lengthy copulation and with it, the need for a baculum.

3. We Pay the Price for Brains

Human intelligence means big brains that come at a price in childbirth. Having a baby can be a joyous life event, but it is undeniably painful at the point at which birth occurs, in the time leading up to birth, and for a while afterwards. While the hips could evolve to become wider, it appears that natural selection pressures to do so have not been strong enough to create a significant change, while human brain development makes for a baby with a substantially sized head (compared to other species) that is admittedly challenging to birth.

The physiological challenges of childbirth have spawned significant scientific theorization, one observation being that while wider hips could develop, a compromise is already made by humans being born at a still very neotenous stage preventing further complications from large brain size. Infants are in a helpless state when born, with much more development required than in many other mammals. A similar parallel is seen in birds, as in helpless baby robins versus ready to go quail chicks or ducklings. Despite the difficulty of birth, human babies are born before further development can take place that would tremendously increase difficulties. People of East Asian ethnic origin possess fascinating traits rooted in genetics. Human genetic research conducted with mouse models showed that a genetic mutation known the EDAR gene with a 30,000-year-old history originated in what is now China. The gene was modeled in a research project by placing the gene into a mouse genome, causing mice to exhibit the traits associated with this gene in humans.

This EDAR gene is responsible for a cluster of distinctive traits including numerous sweat glands, which may have helped early humans in parts of Asia to mitigate excess body heat in humid conditions. The EDAR gene also gives specific anterior indentation in the incisor teeth, compact breast development in women, and the thickest and strongest hair shafts of all human hair types. The sturdy hair of humans of East Asian genetic origin boasts round follicles and immense strength to the point where it is favored in the market for authentic human hair wigs.

1. Humans Genetics are Shaped by Malaria As humans, our genetic makeup has been altered by abnormalities in our gene pool responding to the threat of the malaria pathogen. There are three significant abnormalities, or polymorphisms affecting hemoglobin in humans around the world including sickle cell anemia (best known from African populations), a form of thalassemia that causes anemia in some Mediterranean populations, plus a different thalassemia in some regions of Asia that protects against malaria. Interestingly, these abnormalities are only present where malaria is known to occur.

Research conducted in Papua New Guinea showed that a disorder called alpha thalassemia causes those affected to have red blood cells of an unusually minute size compared to typical individuals. As a result, those with the condition have their hemoglobin distributed across a greater cell count. Despite causing mild anemia, the condition lends valuable resistance to malaria. In the occurrence of conditions like alpha thalassemia, we see a prime example of natural selection at work on traits in the global human population.