Like all workers, bank robbers are adapting to a changing culture. According to Albert Samaha’s 2014 article for The Village Voice, “How Bank Robbery Trends have Shifted in America over the Years,” only one-third of the bank robbers who committed robberies in 2000 used guns. Since contemporary tellers are instructed to comply with robbers’ demands in order to ensure their own safety, using a gun is an unnecessary legal and physical risk for the robber. In 2011, 58% of robbers committed a robbery by passing the teller a note wherein he or she demanded cash. The techniques used for bank robberies vary, but some robberies are stunning by any standard.

10. The John Dillinger Gang at the Central National Bank of Greencastle (Greencastle, Indiana) By the time the John Dillinger Gang’s black Studebaker pulled up in front of the now defunct Central National Bank of Greencastle on October 23, 1933, the gang had already successfully completed six of the thirteen robberies it committed from 1933 to 1934. In 1934, Dillinger would become the first criminal declared Public Enemy Number One by the FBI, then led by J. Edgar Hoover. Glamorous and (sometimes) gentlemanly, Dillinger was christened “Robin Hood” by the American press, because he stole from the banks that had failed the American people during the Great Depression.

At the Central National Bank of Greencastle, Harry Copeland waited outside the bank while John Dillinger, Harry Pierpont, who became Dillinger’s mentor while Dillinger was serving a prison sentence for his first attempted robbery, and Charley Makely entered. From the door, Harry Pierpont walked up to the fourth bank teller from the left, Ward Mayhal. Pierpont asked Mayhal for change for a twenty dollar bill. Mayhal was filling out paperwork so, without looking up, he told Pierpont to go to the next window. Sensing Pierpont hadn’t moved, Mayhal looked up. He was staring directly into the barrel of Pierpont’s sawed-off shotgun.

While Charley Makely aimed a shotgun at the bank lobby, John Dillinger leaped over the counter and demanded that the teller open the bank vault. While Dillinger emptied the cash drawers, Pierpont emptied the money from the vault into a large white sack. Historians say the John Dillinger Gang stole roughly $74,000 in cash and bonds (the equivalent of $1,419,178.78 in 2019) without firing a gunshot. Dilinger claimed he stole $ 32,000 (the equivalent of $613,698.93 in 2019).

What distinguishes Mr. Robinson from other contemporary robbers isn’t how much money he stole, but the literal length he went to to steal it. After his release from a Pikeville, Kentucky jail in November 2018, he brazenly violated his parole officer’s order that he not leave the state. In three weeks, he traveled over 3,000 miles to commit seven robberies in six states: Florida, North Carolina, Tennessee, Alabama, Illinois, and Utah. The police and the press nicknamed him, “The Traveling Bandit” because he traveled so far, often in disguise. Robert J. Louden, professor emeritus of criminal justice and homeland security at Georgian Court University said Robinson’s technique was smart because he was media savvy. His large target area for robberies prevented the police from tracking him, and he was active in so many states that no local media outlets consistently covered his crimes.

Robinson was apprehended on January 29, 2019. This wasn’t because he neglected to take precautions. It was because a security camera on the site of his first robbery caught him taking them. On December 28, 2018, Robinson walked into the Capitol Bank in Aventura, Florida, wearing shades and a wig. He passed a note to the bank teller wherein he both demanded cash and indicated he was armed. The bank teller opened the safe and gave $1,900 to Robinson, but he also pulled a silent security alarm. Though Robinson escaped, police reviewed surveillance video of the man running into an alley behind a Kosher Kingdom supermarket. Once there, he changed clothes, putting on a dark blue sweatshirt reading “STRAIGHT OUTTA DALLAS.” When he raised his arms while removing his shirt and putting on his sweatshirt, police were able to see the designs of the tattoos he had on both arms. Searching potential suspects for those tattoo designs enabled police to identify and arrest him. The two used all of the money they seized to buy drugs, food, and hotel rooms. Both robbers were apprehended in 2017, after an informant who saw Begin in his getaway car identified his tattoos for police. The money has not been recovered. In the aughts, a new profession is practicing gender equality: bank robbing. In 2012, one in ten bank robberies were committed by women. This trend is partially due to the changes in bank robberies themselves. As previously noted, most contemporary robbers don’t use guns or physical force. Forensic sociologist Rosemary Erickson says female bank robbers usually have more practical motivations than their male counterparts. They rob banks because they cannot meet their families’ needs, not because they desire prestige or profit.

In 2011, a short, slim, well dressed black woman wearing a shoulder length light brown wig and dark colored high heels entered a Charter One Bank in Toledo, Ohio. Though she was armed with a knife, she never used it. She handed the teller a note demanding money and accepted an undisclosed amount of cash. The woman ran out of the bank, but she eventually climbed into a gold sport utility vehicle. Police suspect the same woman committed another robbery in Toledo, Ohio. She has not been charged, because she was still at large as of 2012. 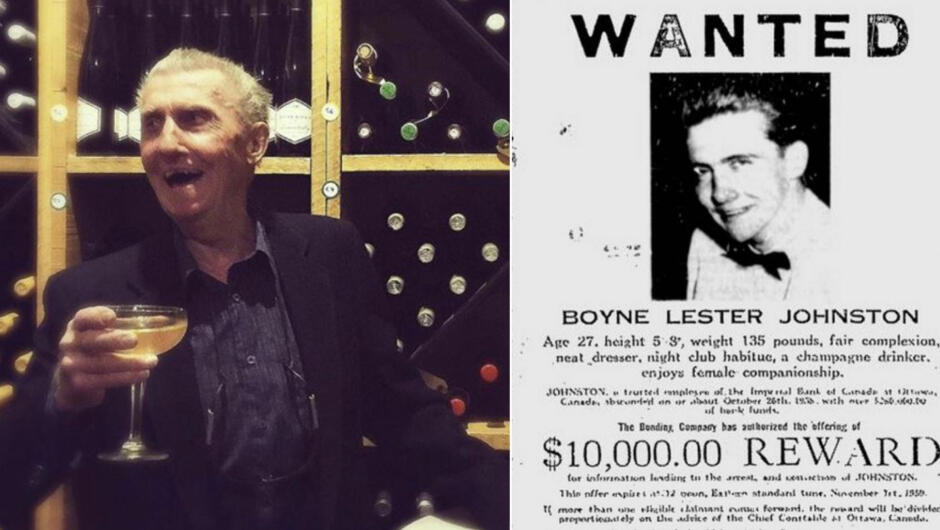 In 1958, young, dapper bank teller Boyne Lester Johnson robbed his place of work. The press was fascinated by the fugitive’s stylish appearance. In his wanted poster, Johnson was wearing a white tuxedo and a black bow tie. Along with his height and weight, the poster included this description: “[N]eat dresser, nightclub habitué, a champagne drinker, enjoys female companionship.”

Johnson was never caught, but he was found when he returned to the scene of his crime. By 2018, the former bank had moved out of the building, and the Riviera restaurant was in its place. On August 10 of that year, Johnson delighted the restaurant staff by stopping by the Riviera for a drink.

5. The James Gang at The Ocobock Brothers’ Bank (Coryden, Iowa)

The James Gang, led by brothers Jesse and Frank James, exploited the sociocultural and socioeconomic instability caused by the American Civil War for their personal gain, robbing banks and trains and eluding capture for fifteen years. In June of 1871, the James Gang arrived in Coryden, Iowa. When the James Gang arrived, anti-war, anti-succession politician and activist Henry Clay Dean was delivering a speech at a Methodist Church. Dean was a respected orator and, as the James Gang suspected, his speech was well attended.

As a result, many public spaces, including the Ocobock Brothers’ Bank, were nearly empty. The gang’s $6,000 heist might have gone unnoticed by most of the town, had the gang not chosen to enter the Methodist church where Dean was speaking and taunt the audience by waving the money at the crowd. 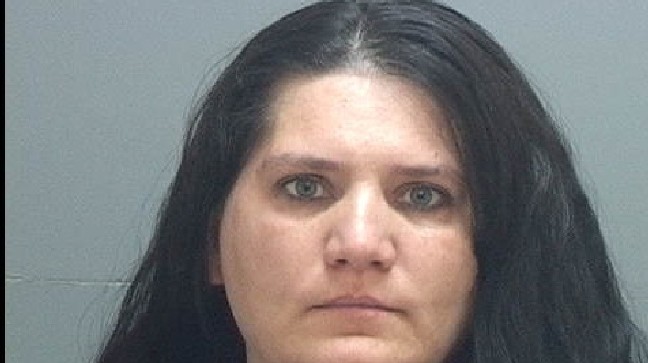 Despite her casual attire, Nanette Perkins was very efficient at her chosen profession: robbing banks. In 2017, Perkins robbed five banks in two days, beginning with Chase Bank in West Valley City, Utah. At each bank, she handed the teller a note demanding money. She never produced a weapon. Perkins taunted the banks’ surveillance cameras. She made no attempt to disguise her appearance. Apart from her prescription glasses, Perkins wore a blue bandanna wrapped around her head. In many of the robberies, she wore pajama bottoms.

She successfully stole roughly $9,000, but she agreed to return a portion of the money as part of her plea agreement when she was finally apprehended in 2018.

In July 1976, after two months of drilling through the city sewer system in Nice, France, 13 robbers crawled through the sewers and entered the bank vaults of the Société Générale from underground. Over six days, they emptied three hundred seventy coffers of gold, jewelry, and cash. Their haul was worth 50 million francs (the equivalent of roughly 24 million pounds in 2019). As the gang was fleeing, the rising sewer waters flooded the bank. Police arrested the gang’s ringleader, Albert Spaggiari, who claimed he based his heist on a heist in a novel.

Some members of the gang were successfully arrested and convicted. Spaggiari, however, escaped. When he was led to trial, he jumped out of a 20-foot window in the judge’s office. He mounted a waiting motorcycle, which took him to a Rolls Royce. His getaway driver drove to Paris, with Spaggiari in the trunk of the car. Spaggiari never returned to France. Due to contemporary technological advances, it’s possible to rob a bank without even entering one. Dennis K., who was given that nickname by the Spanish police who apprehended him, and his cohorts robbed several international banks from late 2013 until K. was apprehended in 2018. How did these robbers visit so many banks in so many countries without getting caught?

Well, they didn’t. The robbers designed two types of malware, Anunak and Carbanak, and uploaded them onto the digital systems of bank ATMs around the world. Later, the robbers adapted the security testing program, Colbalt Strike, into malware. Dennis K. didn’t go into banks; he made bank ATMs release money directly to him. In less than five years, these cyber criminals made roughly $2.1 billion. Dennis K. has been apprehended, but the money has not been recovered.

1. Colonel Thomas Blood in the Tower of London (London, England) Irishman Thomas Blood knew how to exploit political strife for personal gain. He supported King Charles I of England until Charles was beheaded in 1649. During the English Civil War, he abandoned the Cavaliers (the king’s men) when their defeat was imminent. By the end of the war, he was a favorite of the Roundheads’ puritanical leader, Oliver Cromwell, who was named Lord Protector of England after his victory on the battlefield. When Charles II, son of Charles I, returned to England in 1660 to be crowned the country’s rightful ruler, Blood fled to Ireland. There, he joined two plots to seize Dublin Castle. When the second one failed, he fled to Holland.

Desiring riches, Blood returned to England. On May 9, 1671, he stole the royal Crown Jewels. Posing as a parson, Blood convinced the Keeper of the Jewels, Talbot Edwards, to let him see the underground vault in the Tower of London where the jewels were kept. Once Edwards unlocked the door, Blood clubbed Edwards’ head with a mallet and stabbed him with a sword. While the Keeper of the Jewels was unconscious, Blood flattened the crown with a mallet and put it into a bag, stuffed the orb down his breeches, and tried unsuccessfully to cut the scepter in half so that it, too, could be placed inside the bag. His heist was successful, but he was apprehended while trying to shoot one of the palace guards.

Blood demanded to be brought before the king, who was charmed by his roguish impertinence, especially when he devalued the Jewels’ worth. When King Charles asked, “What if I should give you your life?” Blood answered, “I would endeavor to deserve it, Sir.” Blood was given his life. The king also awarded the former Cromwell loyalist a tract of land in Ireland worth 500 pounds per year. Since Blood, no one has attempted to steal the Crown Jewels.