There’s a saying that truth is stranger than fiction, and this has never been more true than news headlines starring the Florida Man. Weird events happen all over the world, but for some reason, a whole other level of strange seems to be concentrated in the state of Florida. Taken out of context, stories about Florida Man sound like the world’s worst superhero, but it’s really just a bunch of guys doing a lot of stupid things. Creating realistic counterfeit money is actually a very intricate process. US dollar bills are made out of strips of woven fabric, and they contain fine microscopic details and holographic chips for added security. Even though it should be obvious that it’s nearly impossible to make fake money, that didn’t stop Florida Man from trying.

Earlier this month, a 29-year-old man named Levy Newberry found a template for counterfeit money on Pinterest. He went to his public library in Pasco County, Florida to use their printer to make hundred-dollar bills on regular printer paper. He posted his misdeed on Facebook, using his real account, and he actually found another brilliant Florida resident who was willing to pay $250 in real cash in exchange for $500 in fake money. Newberry then used the flimsy paper fakes to pay his rent. His landlord could clearly see that this money was counterfeit, so they called the police, and he was taken into custody.

9. Florida Man Called 911 After His Cat Was Denied Entry Into Strip Club In June 2012, a man named Everett Lages was trying to spend a night in the Emerald City Gentlemen’s Club in Murdock, Florida. He must have pre-gamed a little bit too hard beforehand, because he was already highly intoxicated and and carrying a kitten. The bouncers refused to let him inside with an animal. This made him so angry that he sat down outside of the club and called 911 over and over again, hoping that the police would ignore health code violations and escort him inside.

When the police arrived, they calmly tried to get him to go home. To their credit, they knew this guy was just too drunk to function, and offered to call him a taxi. He refused, and started making a scene. He continued to call 911, even though the cops were standing right there. They had no choice but to arrest him for calling 911 for a non-emergency, disorderly intoxication, and trespassing on a property after being asked to leave. Lages was held on a $4,000 bail, and his kitten was given to the local animal shelter.

8. Florida Man Arrested After Chasing Down Neighbor With a Tractor In most states, if two property owners have a disagreement about where their property line begins and ends, the issue can be solved by contacting their local municipality. But in Florida, apparently nothing is ever that simple. In July 2018, a man named Scott Lynch was concerned when his 72-year-old neighbor, Howell Morris, started to use his tractor on Lynch’s property, destroying what he believed to be his land. He was also blocking Lynch’s driveway, so Lynch walked over to ask him to move.

Instead of moving his tractor like a reasonable person, Morris pushed the machine into gear and started chasing after Lynch, who started running for his life. Lynch’s wife caught it all on her cell phone camera and called 911. Morris was later arrested for aggravated assault. 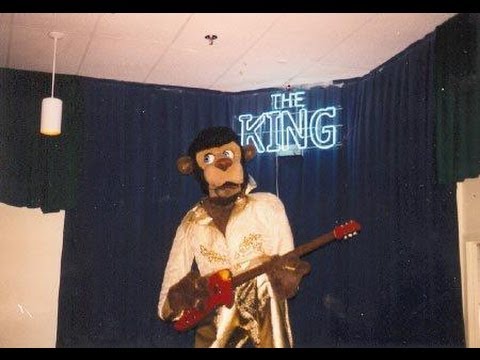 As a boy, Jared Sanchez’s happiest memories were going to Chuck E. Cheese with his family. His favorite animatronic character was one called “The King,” which was an Elvis impersonator in the form of an anthropomorphic lion. One day, he came into the restaurant to see that The King was gone. For the next 20 years of his life, he wondered if he would ever see his favorite character again.

As an adult, he moved up the ranks of retail from starting as a Walmart stocking clerk to eventually landing a supervisory position making well over $90,000 a year. While his life seemed like a success, he began to feel the stress of firing people on a regular basis. He admits that he couldn’t handle the job, and ended up having a nervous breakdown. He had to take time off from work to recover.

Sanchez found The King on eBay, and paid $10,000 to bring it into his Tampa home. Since then, he has transformed the master bedroom of his house into a studio for The King and decorated the space to look like the inside of a Chuck E. Cheese. Sanchez says that by bringing The King back to life, he hopes that maybe someday, the character can be made into the star of a kids’ TV show. For now, he uploads his own videos of the robot on YouTube.

If you’re old enough to drink, you’ve probably had at least one night where things got a little out of hand. But it’s likely that none of you can top Floridian Bobby Stratton. During a complete blackout, he found a live alligator, picked it up, and carried it under his arm into a convenience store. While he was shopping, he bought an 18-pack of beer.

Later, when he was confronted by the police, he claims that he did not remember the events of that night at all. He was so blackout drunk that he had no idea where they alligator came from. He told the local news that maybe he would go to jail, or maybe not. He didn’t seem to care either way. After all, once you’ve made a beer run with an alligator it’s all downhill from there anyway.

5. Florida Man Tries To Rob A Store By Pointing His Finger Like a Gun It was 2:00 a.m. in February 2018 at a 7-11 convenience store in Bonita Beach, Florida. An underpaid sales clerk was working the night shift when Florida Man burst through the door with a shirt covering his face, and his finger pointed like a gun. He demanded all of the money in the register.

The cashier simply said “No.” This was enough for Florida Man to give up. He didn’t take anything, and ran out of the store to jump on his bicycle. Let’s just hope he took the shirt off of his face first, so he could see in the dark. No one was hurt, but the local police still offered a $1,000 reward for any information that may lead to his arrest.

4. Florida Man Steals 11 Zoo Animals And Hides Them In His Home Now, we know what you’re thinking. How on Earth could someone steal 11 zoo animals without being noticed? Well… they were turtles. Oh, and Florida Man took a squirrel monkey, too, because… why not? And no, the culprit wasn’t the zombie-faced boy who said “I like turtles.”

This was a 20-year old Gainesville, Florida resident named Sedrick T. Price. He went to the Santa Fe College Teaching Zoo, where students learn how to be zookeepers. When the police raided his apartment, they could only find 7 of the 11 missing animals, so it’s possible that Price was selling them to rare animal collectors at roughly $100 apiece.

It’s not that uncommon for people to accidentally donate valuable things to a thrift store, especially when they are in the process of moving. But in Florida, one employee of the Bradenton Goodwill discovered a fully loaded grenade launcher. Now, it’s usually someone’s job to at Goodwill test if things still work in the back room. None of the employees apparently wanted to deal with the drama, so they would just pass it around to the next store location.

Eventually, one Goodwill manager interfered. They had no way of knowing what genius of a Florida Man actually donated the grenade launcher, so they had to hand it over to the Bradenton police department. It now sits in their armory. Daniel Espinosa likes panties, and sneaking just one or two pairs off the store shelf wasn’t enough. He stole a total of $15,475 worth of underwear from Victoria’s Secret before getting caught. He was seen by the security cameras, of course, after making three separate trips.

He didn’t work alone, however, as an unnamed juvenile codefendant was reportedly also involved. The codefendant, apparently, stole more than $76,000 worth of property (it’s unclear if it came solely from Victoria’s Secret, or if he branched out to other forms of theft). At the end of the hearing, the judge said, “Please… don’t come back to Victoria’s Secret.”

1. Florida Man Steals a Chainsaw By Stuffing It Down His Pants When you imagine stealing something from a store, it would only make sense to slip something into your pocket that could go undetected. But, come on… a Florida Man doesn’t do things half-assed. In November 2014, a 27-year-old named Anthony Ballard stole a chainsaw by shoving it down his pants, and using his t-shirt to cover it up. You probably just winced at the notion of a freaking chainsaw being shoved down your pants, especially if you’re male.

This was all caught on camera, and one of the employees could clearly see the bulging chainsaw through his clothes. An employee chased him, and the bulky saw was too much for Ballard to carry and run at the same time, so he dropped it. They called the police, who were able to catch Ballard and charge him with grand theft.