In 1972, Scottish biologist Ivan T. Sanderson described a new geography of the globe: an “energetic planetary grid” based on twelve ‘vile vortices’ or ‘devil’s graveyards’ where “funny things happen”. The Bermuda Triangle was the first on his list. According to Sanderson, hot and cold air and sea currents in this and other regions create electromagnetic anomalies that ultimately cause ships and planes to fail.

Numbering six in the northern hemisphere and six in the south, the vortices mostly lie in the Tropics of Cancer and Capricorn. The only two that don’t are the North and South Poles, but Sanderson himself was dismissive of these.

While the theory seems kooky, it didn’t come from nowhere. It was actually part of a wider parallel “science”. In fact, it seems to have elaborated on copies of two “ancient” maps – the Piri Reis and Buache – found in 1929 but dated (allegedly as copies of earlier versions) to 1523 and 1737 respectively. These featured similar geometry to Sanderson’s, as well as a detailed survey of Antarctica not possible until 1958. In turn, Sanderson’s theory inspired many others – like the three Soviet scientists who added 50 more sites to his list.

OK, so it is kooky. But as alternative science and history grow in popularity, you may hear a lot more about it. Agree with him or not, here’s a quick primer on his ten devil’s graveyards – listed in the order he found them. Known for its turbulent, unpredictable weather patterns and disappearing ships and aircraft, the Bermuda Triangle is the best studied site on this list. It’s the one that got Sanderson thinking. Although the official line – which refuses to even acknowledge the Bermuda Triangle – says there are no more disappearances here than anywhere else, there are many strange things about it. For example, true and magnetic north sometimes align in the region. It’s also the source of many hurricanes and, while much of it is shallow, parts around Puerto Rico are the deepest in the whole Atlantic. In any case, Sanderson had just one incident in mind: Flight 19.

On December 5, 1945, five TBM Avenger torpedo bombers vanished without a trace shortly after taking off from Fort Lauderdale. Allegedly, the pilots were able to maintain radio contact with each other for a time – and could be heard wondering where they were and why the ocean looked wrong. A Martin PBM Mariner dispatched to find the missing aircraft also disappeared – according to Sanderson, within 15 minutes.

Although “debunked” by Larry Kusche, Flight 19 was almost two decades before the words “Bermuda Triangle” came into use. An even earlier incident in March 1918 saw the unexplained (to this day) disappearance of Navy collier USS Cyclops – the wreckage of which has never been found.

The next site to get Sanderson’s attention lies off the east coast of Japan. Also known as the Formosa or Dragon’s Triangle, the Devil’s Sea sits at the intersection of three ocean ridges. Like the Bermuda Triangle, it has – allegedly – been the site of numerous disappearances, attributed by Sanderson to hot and cold currents.

The most famous was the research vessel the No. 5 Kaiyo-Maru, which disappeared in September 1953 along with its 31 crew members. But, as Skeptoid points out, since it was in the vicinity of an erupting underwater volcano – and debris from the wreckage was found – this isn’t that much of a mystery.

That said, other ships – including military and fishing vessels – are also said to have vanished. For example, Sanderson was surprised when, appearing on The Dick Cavett Show to debate his theories with skeptic Arthur Godfrey, the latter had his own tales to share. Among them were firsthand reports of instrument failure while flying over the region. At Tindouf, Algeria – on the edge of a dune sea – lies the next devil’s graveyard on the list. Linked to “mysterious plane disappearances over the Sahara,” this oasis rich in minerals is where many birds spend the winter.

The specific location varies depending on the source, with El Eglab (300 kilometers southeast) and the mysterious Jedars – the Algerian pyramids or megaliths – (1400 kilometers northeast) being the most commonly mentioned. Considering the size of the Bermuda Triangle, though (at least 805,000 sq. km.), this actually does make sense.

In fact, Sanderson’s interest in the region was originally piqued by reports of two submarines and four small vessels disappearing in the Mediterranean – not in the Sahara but off the north coast of the country. Shortly after identifying the Algerian “vortex,” Sanderson got a letter saying planes carrying gold were disappearing over Afghanistan. Some of the gold had been found but there was still no trace of the planes. Of course, this being the Afghani-Pakistan border, it was hardly a case for The X-Files. But what was surprising was that the sender of the letter had no idea Sanderson was looking into this stuff. Needless to say, the coincidence led Sanderson to his next devil’s graveyard.

Centered on the Sindh-Balochistan border north of Karachi, Pakistan, the area he settled on isn’t too far south (100 kilometers or so, as the crow flies) of Mohenjo-Daro – an ancient capital of the Indus Valley Civilization. Although he didn’t mention it in his article, the “lost city” – obviously once luxurious and powerful despite its absence of palaces or temples – remains a mystery to archaeologists. We still don’t know who lived there, or why, around 1900 BC, they seem to have disappeared. Allegedly, model aircraft have also been found in the city.

Proximity to Mohenjo-Daro aside, though, this site was chosen mainly because it fit the emerging pattern of Sanderson’s planetary grid. Interestingly, it’s also linked by a fault line to the Algerian devil’s graveyard. References to “Hamakulia volcano” appear solely in articles about Sanderson. It doesn’t exist in the real world. In fact, there’s no known volcano by any name at the coordinates for this vile vortex. Nevertheless, having identified four sites along the 26.57°N line of longitude – each separated by 72° – the next one had to be here.

Allegedly planes have disappeared over this region. Arthur Godfrey from The Dick Cavett Show once told Sanderson that an experimental flight he was meant to be on but missed vanished while he followed by radar. And a pilot flying a plane full of passengers over the zone claimed to have lost comms for 560 kilometers. When contact finally returned, he was shocked to be told that no time had passed whatsoever.

Intriguing as these tales are, Hawaii’s volcanoes are mysterious enough as it is. We still don’t really know how they form. Being in the middle of the Pacific Plate, thousands of kilometers from any fault lines, they don’t fit with what we know about how volcanoes form.

Turning his attention to the southern hemisphere, Sanderson placed his next vortex southeast of Rio de Janiero. The South Atlantic Anomaly (SAA), the point where the Earth’s magnetic field is at its weakest, is – unlike the Bermuda Triangle and so on – officially recognized as a place where “funny things happen”. NASA has called it a “pothole in space”. It’s where charged particles from the Sun are able to penetrate closer to the surface and, as a result, cause problems for orbiting spacecraft.

Instruments aboard the International Space Station, Skylab, NASA space shuttles, and SpaceX’s Dragon craft are all prone to glitches and premature aging. The Hubble Space Telescope is also affected, spending nearly 15 percent of its orbit here. Even astronauts have issues – reporting weird ‘shooting stars’ in their vision.

Although the anomaly seems not to affect life on the surface, Sanderson claimed to know of “alarming disappearances” in the region. It also appears to be growing. According to NASA, the SAA is “expanding westward” and splitting into “two lobes, creating additional challenges for satellite missions.” Though focused on the Eswatini town of Luyengo on the Maputo River, this devil’s graveyard has been linked to the ruins of Great Zimbabwe – 900 kilometers to the north. It’s unclear what “alarming disappearances … off the southeast coast of South Africa” Sanderson had in mind here, but the ancient city is a mystery in itself.

Built around 900 years ago, it was once a global center of trade and religion. Artefacts from as far as China have been found there, along with copper crosses thought to have been used as a currency. The ruins themselves have features that we still don’t understand. One of these – “the largest single prehistoric structure in sub-Saharan Africa” – is a 10-meter-high, 5-meter-wide conical tower, surrounded by a wall that’s 250 meters long and 11 meters high.

The city of Great Zimbabwe was thought so advanced by early (racist European) explorers that it could never have been constructed by Africans. Instead, they believed it was evidence of a “civilized” (i.e. white) African nation. In any case, for reasons unknown, it was abandoned in the 15th century. 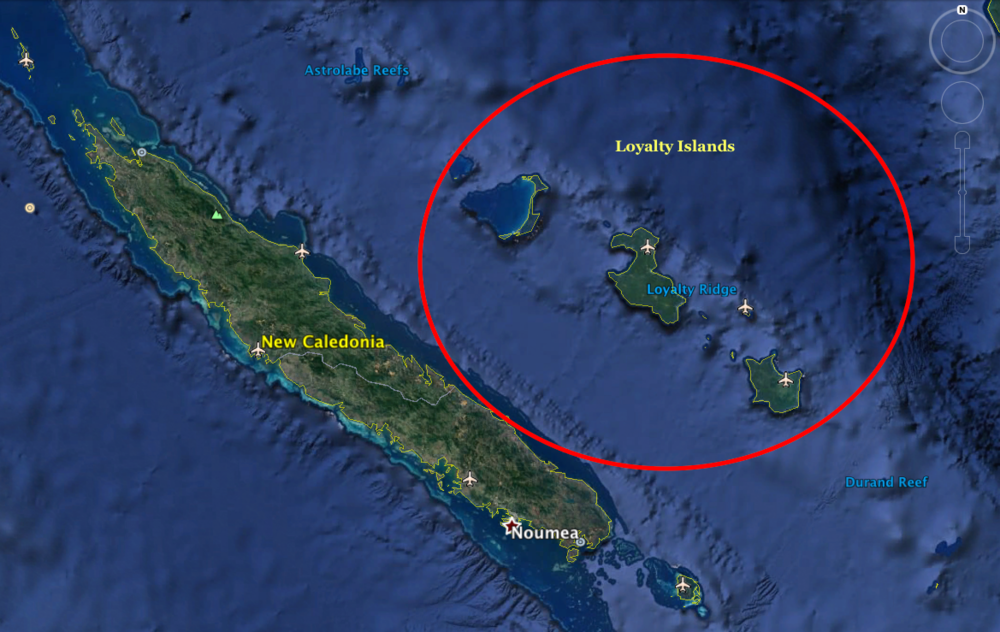 The Loyalty Islands are an archipelago 1,600 kilometers east of Australia. Known for cyclones and earthquakes, it’s no surprise that a ship carrying 75 passengers once mysteriously disappeared here. Part of this has to do with the 1200-kilometer New Hebrides Trench, which reaches depths of more than 7,500 meters in places and remains largely unexplored. What we do know about it is that it’s ecologically very different from any other deep sea trench.

Taking these features together as one devil’s graveyard, it’s interesting that an entire landmass also “disappeared” here. Sandy Island, which has appeared on maps (including Google Earth) for many decades, has long been assumed to exist. Someone must have seen it at some point. But when scientists set out to visit in 2012, they found only open ocean – 1,400 kilometers deep. Sanderson found the next vortex by measuring 72 degrees from the South Atlantic Anomaly, which led him to Easter Island – and the ,5900 kilometer Easter Fracture Zone on which it sits.

There’s not a lot to be said about this one in the way of documented disappearances, except of course for the island civilization that built the mysterious Moai. The mainstream theory for how these people disappeared is their precipitation of ecological collapse. Once they’d cut down all the trees – for agriculture, fuel, and transporting their iconic statues – the soil depleted and people starved. It’s thought rats prevented regeneration by eating all the seeds and disease-ridden European explorers killed off any survivors.

Alternative theories, meanwhile, suggest the statues are alive or left by UFOs. 72 degrees from the Loyalty Islands is Wharton Basin – “an area of deadliness,” Sanderson heard – in the northeast Indian Ocean, 400 kilomdgdfx off Sumatra. It’s here, from a seafloor riddled with fracture zones, that many large earthquakes originate.

It’s also where Malaysian Airlines Flight 370 disappeared in 2014. Pings from the black box narrowed the plane down to a 32 by 16-kilometer stretch before falling silent forever. It’s thought the Boeing 777, which disappeared in March of that year, lies buried in the Basin’s silt floor. However, the region is largely uncharted, the depth abyssal, and, despite early optimism, the wreckage still hasn’t been found.

More recently, we’ve learned Flight 370 didn’t fly straight into the sea but circled for 20 minutes first – similar to the ‘holding pattern’ while waiting to land at an airport. A number of explanations have been offered for this: The pilot may have been communicating with the Malaysian government, or checking to see if he was followed, or simply thinking things through. But what this new information makes clear is that the pilot – or a pilot – wasn’t unconscious as previously thought but “deliberately flew the plane into oblivion”. We just don’t know why.

Just to conclude, the North and South Poles are – as mentioned – the final two devil’s graveyards. Suggested by professional pilots, they’re places where time is “a little off”. While Sanderson did include them in his grid, he was also mostly dismissive, attributing the phenomenon to simple disorientation caused by compass malfunction. Which makes one wonder – is his skepticism here (which wasn’t out of character) enough to lend credence to his theory?