The word gang has taken on many meanings throughout the years. Originally, the word was just used to express a group or band of people. You probably have heard someone talk about the local gang of boys or something of that sort. In older times, the word gang didn’t have such the negative tone that comes along with it today. As time has gone on, the word gang has grown to be a word that many worry about when they hear it. It seems a “gang” has evolved from just being a group of people to a group of people that associate for some criminal or other antisocial purpose.

Depending on where you live, you have probably heard about gang crimes. If you don’t live too close to a big city, it is sure that you have read or watched the news and heard about some sort of gang activity. Gangs exist all over the world, not just in your own country. Here are the top 10 of the most dangerous gangs that you definitely don’t want to come into contact with.

Another jailhouse gang for you. Even though they are not one of the biggest prison gangs, the Aryan Brotherhood is known to have murdered many prisoners in jail. The gang only makes up about 1% of prison populations, but size doesn’t matter to the AB. In fact, this gang is known for at least 26% of the murders that occur in prisons around the U.S. The AB is split into two groups, usually those in federal prisons and other members that are located in some of the smaller state prisons, especially those in California. In order to join the Aryan Brotherhood, one has to kill or assault another prisoner. This is known as blood in, blood out. Any who try to leave the gang are generally assaulted or murdered by a member. The AB is known for organized crime, extortion, inmate prostitution, drug trafficking, and murder-for-hire. 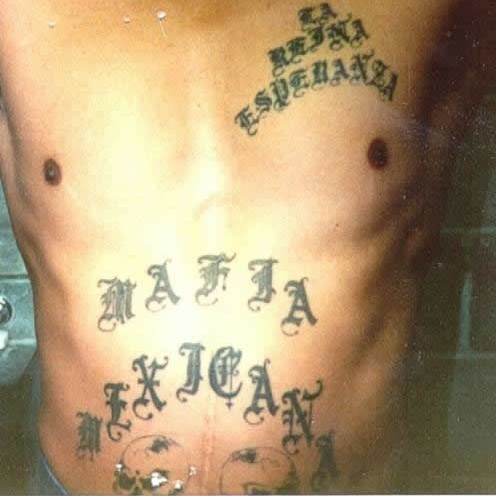 The Mexican Mafia is a gang that has its strongholds in many prisons throughout the U.S. The gang was started in the 1950s in Tracy California. La eMe is well known for its drug trafficking, extortion, and murder. Closely knit with the Aryan Brotherhood, La eMe has made many contracts with ally gangs in order to kill other gang members from rivals. The gang doesn’t have many rules for its members: no exposing the gang, no homosexual acts, and no cowardice. Mexican Mafia gang members also cannot practice the Christian religion. Once your join the Mexican Mafia and are released from jail, members are expected to send some of their earnings to those lead gang members who are still in jail. The gang isn’t known to kill random civilians.

This gang isn’t one that you’ll find in the U.S. The Mungiki is mostly found in poor parts of Kenya, especially Nairobi, which is one of Kenya’s largest cities. The gang was formed during the 1980s and has since grown, but not much. The gang is known to work in “cells,” each of them consisting of about 50 members that get involved with racketeering. The Mungiki are extremely against Christianity as well as any type of Westernization. The gang believes in forced female genital cutting, beheading, and mutilation. As many as 50 people have been killed because of clashes with the Mungiki, two of these people being Kenyan police offers who were beheaded. The gang is said to have some ties in the U.S., but this has never been concretely proven.

A Brazilian gang, Primeiro Comando da Capital comes in at #7. This gang is one of the newest Brazilian prison gangs to be formed. Founded in 1993 by eight prisoners, PCC is one of the smallest prison gangs around today. Primeiro Comando da Capital is extremely against government establishments like police stations, justice forums, and even buses. Since the middle of 2006, the gang is known to have carried out about 300 attacks, all of them being against public establishments. The gang is mostly funded by its members. All members have to pay a monthly fee to be in the gang, which is about $27 if the member is in jail, and $270 if the member is out of a prison. Most of the money is used to buy weapons as well as drugs. Some of the money is put towards bailing out members. In order to become part of the Primeiro Comando da Capital, you have to be introduced by a regular member of the gang. An oath must also be accepted.

Founded in 1966 by a man named George Jackson, located in Marin County, California, the Black Guerrilla family is one of the many gangs that is associated with the African-American race. The gang was established in order to maintain Black dignity in prison as well as planning to overthrow the U.S. government. Standing as one of the most politically influenced gangs, the Black Guerrilla Family has very strong emotions towards Marxism. Today, the Black Family has about 50,000 gang members, many of which who are associated with other gangs. In order to join the gang, one must be black, and must be nominated by an already existing member. Recently it has been said that the gang is experiencing internal conflicts between old and new members.

La Nuestra Familia is a Mexican American prison gang that originated in Northern California. The gang has been around since 1968 and has always been a rival of the Mexican Mafia. Many speculate that the gang was created just to deliver a blow to their rival gang. The gang puts a high focus on protecting as well as preserving the Chicano culture, especially while living in a society that is dominated by so many different races. La Nuestra Familia is known to control intra-prison drug and sex trades. From the prison, high-up gang members call to those outside of the prison to prefer hits. The gang is known to kill anyone, sometimes members of the gang. Members of La Nuestra Familia are known to be serious criminals because the gang requires a two year time period to join. La Nuestra Familia requires that all gang members put the gang above family, money, drugs, and women. Women cannot join the gang but are sometimes used for running drugs.

Texas Syndicate is a California State Prison gang that was created in response to other Californian gangs like the Mexican Mafia and the Aryan Brotherhood. Because these gangs were preying on inmates, especially those in Texas, prisoners saw a  need to have a rival gang to protect these Texas prisoners as a means for self-protection. The Texas 7 doesn’t allow any members that are outside of the Hispanic race. Caucasian members are extremely frowned upon. The gang is made up generally of Mexican immigrant prisoners, not Mexicans who were born and raised in the U.S. In 2000, the gang was said to have about 1,000 members in jail, and about 830 outside of jail. Texas Syndicate is known for contract murder, gambling, prostitution, extortion, and drug trafficking. Many of the gang’s leaders are imprisoned due to drug charges.

The Crips was started in 1969 by a 16-year-olds Stanley Williams and Raymond Washington. The two started the gang as a playoff of the Black Panthers. The gang started off small and was a loosely connected network of individual gangs. Since its origination, the gang has grown to be one of the largest as well as one of the most powerful gangs that exist in the U.S. Today, the gang is said to have over 300,000 gang members both inside and outside of jail. The Crips are known for wearing the color blue. The gang is known to carry out murders, robberies, as well as drug deals. The Crips are extremely bitter rivals towards the Bloods as well as many different Hispanic street gangs. The gang is known to be extremely violent and sometimes brawls and fights explode within the gang, which usually end up in deaths of Crips members. While fighting other gangs, the Crips also fights against itself. This gang is so big that it has even spread to other countries like Canada.

The Bloods is a Los Angeles based gang that is known mainly for its rivalry with the Crips as well as for wearing the color red. The gang started in 1972 and grew slowly by taking over territory that was controlled by other L.A. street gangs. Because the Bloods were so fearless, many of the gang members that they encountered decided to band together and join the Bloods. The gang is separated into “sets,” which have their own tactics, especially when it comes to recruiting. The gang overall is known to recruit members through those who volunteer while the Bloods’ sets are known to send threats to people to join the gang. Bloods members often combine with other gangs in order to carry out criminal activity, especially drug trafficking.

Mara Salvatrucha makes all of these other gangs seem like foolish people selling drugs. MS-13 is in fact the deadliest gang that anyone will ever come into contact with. The gang mainly consists of Guatemalans, Hondurans, Salvadorans, and other Central Americans and was started in the 1980s to protect immigrants from other big gangs.  The gang has been able to spread beyond Central America into Spain, U.S., Great Britain, Germany, and even Canada. MS-13 is well known for drug smuggling, black market gun sales, theft, contract killing, human trafficking, and assault, especially on law enforcement. In the U.S. alone, the gang has 10,000 members. This gang has no remorse for killing anyone. Mara Salvatrucha is known for hunting down and killing anyone who speaks to law enforcement about the gang. MS-13 is known for its extremely violent crimes, especially against innocents. The gang has gone as far to set a bus full of children and women on fire which ended in 28 deaths.