A new annual tradition will start at the end of 2018. On New Year’s Day 2019, hundreds of thousands of movies, books, paintings, drawings, and musical scores will be stripped of their copyright and enter the public domain. For decades, American copyright laws have kept Intellectual Property (IP) from 1923 on under copyrighted, but starting in 2019 all works created in 1923 will convert from copyright protected to copyright free. The next year, on January 1, 2020, the tradition will continue with IP from 1924, and so on year after year. Online companies are taking notice too, with Google Books setting up many of its millions of scanned books, that were published in 1923, to automatically allow full-text free online viewing.

The 1923 movie Safety Last! contains one of the most iconic scenes in silent film history, where actor Harold Lloyd desperately clings to the hands of a large clock on the side of a skyscraper. Roger Ebert called it the most famous scene in a silent comedy. Back then, film safety was pretty much non-existent and a few years earlier, in 1919, Lloyd had actually lost a thumb and forefinger doing promotional work for another film, Haunted Spooks.

His performance in Safety Last! and the movie’s box office numbers cemented his place as an A-List leading man. In honor of its lasting influence and cultural importance, the Library of Congress added Safety Last! to its National Film Registry in 1994. On January 1, 2019, it will be stripped of its copyrighted status and enter the public domain, where you can do anything you want with the film.

Robert Delaunay and his wife Sonia Delaunay were some of the founders of the Orphism art movement, an offshoot of Cubism (of Pablo Picasso fame). Respected art critic Guillaume Apollinaire thought that art should be like music and that Orphism, with its colors and shapes, reflected that. At 38-years-old, in 1923, Robert Delaunay painted an Orphism masterpiece when he created “Hélice.” Today the original canvas is displayed in the German Wilhelm-Hack-Museum. And on January 1, 2019, it’ll be public domain so you can print it and use it however you want.

“The Charleston” is the jazz song that, as you can probably guess, helped spark the Charleston dance craze. The lyrics were written by Cecil Mack and the musical score was done by Jimmy Johnson. When the song was released in 1923, conservative groups were outraged, with Rev. EW Walters, vicar of St Aidan’s, Bristol saying “any lover of the beautiful will die rather than be associated with the Charleston … It is neurotic! It is rotten! It stinks! Phew, open the windows.”

Popular culture did not listen to Rev. Walters, and the song and the dance are legendary in America and around the world. Whenever the roaring twenties are brought up in movies or TV you can count on hearing “The Charleston.”

Considered one of the founding fathers of American cinema, Cecil B. DeMille made over 70 films before dying of heart failure in 1959. His films span every genre and over his career he created both silent movies and talkies (or movies with a soundtrack). He started acting in and producing plays, but entered into the world of movies with his first film, The Squaw Man, in 1914. It was the first feature-length motion picture filmed in Hollywood. A 17-minute short film, In Old California, was technically the first motion picture shot in Hollywood. The Squaw Man was a huge success and cemented Hollywood as the center of movie production.

Nine years later, in May 1923, DeMille started production on an epic biblical story, The Ten Commandments (no, not the Charlton Heston version). The movie stunned Hollywood insiders when DeMille became the first producer to spend over $1,000,000 on a film. He claims the backers actually fired him due to the cost overruns but were forced to hire him back, as he was the only man who could finish the production. When the movie was released in 1923 it smashed box office records and was Paramount’s highest grossing film for 25 years.

The period drama featured huge, life-size sets of Ancient Egypt. After filming, the sets were abandoned to the elements and buried under the shifting sands of California’s Guadalupe-Nipomo Dunes, the largest remaining dune system south of San Francisco. In 2012 archaeologists uncovered the forgotten Egyptian “ruins” created for the film and unearthed several monuments, including one of the 12-foot tall, 5-ton Sphinxes that were produced for the movie.

Russian painter and art theorist Wassily Wassilyevich Kandinsky is considered one of the founders of abstract art and for decades was considered to have created the first purely abstract painting. His 1923 tension series paintings including Zarte Spannung (Delicate Tension) were painted while he worked at the Bauhaus, Berlin a German art school. After they were finished the paintings were in a museum until 1937, when it was shut down under Hitler’s crackdown on art.

The paintings and their owner, Baroness Hilla Rebay, a daughter of a Prussian General, then moved to America where she became one of the founding members of New York’s Guggenheim art museum. After the Nazis closed Berlin’s Bauhaus art school in 1933, Kandinsky moved to France, where he painted until he died from complications of cerebrovascular disease in Neuilly-sur-Seine, France, on December 13, 1944.

Charlie Chaplin had been doing films since 1914 and almost from the beginning played his iconic character, the Tramp. His movies attracted huge numbers and gave him fame and fortune. In 1919 he co-founded United Artists as a means to give him control over film production.

The Pilgrim was released on February 26, 1923. The 46-minute movie was his second shortest feature. Jeffrey Vance, in his 2003 book Chaplin: Genius of the Cinema, says that “The Pilgrim is one of Chaplin’s richest—and most neglected—films.” In 1959 Chaplin released The Pilgrim (1923) along with A Dog’s Life (1918), and Shoulder Arms (1918) as a trilogy called The Chaplin Revue in hopes of being able to reboot the Tramp character.

4. Poem “Stopping by Woods on a Snowy Evening” Robert Frost is an iconic American poet who tallied four Pulitzer Prizes for his work (New Hampshire in 1924; Collected Poems in 1931; A Further Range in 1937; and A Witness Tree in 1943). His work inspires many and these poems are a trusted foundation for eulogy speeches.

Studied by students around the world, Frost’s poetry is carefully monitored by the Frost estate and when his prose is used without permission, cease and desist lawsuits are quick to fly. Famous composer Eric Whitacre found this out the hard way when he completed a commissioned piece for the funeral of the parents of a woman named Julia Armstrong. Listeners at the funeral were enamored with the piece and soon Whitacre was swamped by requests from conductors trying to get the musical score. Around the same time, Frost’s estate caught wind of the score and its use of the poem and, in a flurry of lawsuits, shut it down. 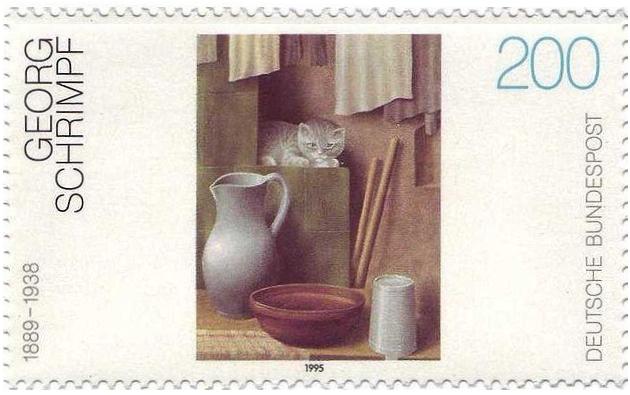 German painter Georg Schrimpf is seen as the main founder of the art trend Neue Sachlichkeit (New Objectivity). Schrimpf also, after World War I, participated in the brief existence of the Bavarian Soviet Republic before it was crushed by the remnants of the Imperial German Army. As Hitler tightened the screws of Nazi power Schrimpf was fired from his university in 1937 and his work was banned as “Degenerate Art” because he was involved in the Bavarian Soviet and deemed a communist. On April 19, 1938, he died at age 49.

In 1923 he painted “Still Life With Cat.” Germany released a commemorative stamp of the image on January 12, 1995, but the original painting is at the Staatsgalerie Moderne Kunst Museum. 1995 was the last year that Deutsche Bundespost (German federal post office) existed and appeared on stamps, as that year it was dissolved during a government privatization push. Felix Salten published Bambi: A Life in the Woods in 1923. His target audience was adults and it was first published as a serialized tale in Austria. The story was hugely popular and caught the eye of Max Schuster, co-founder of the now giant publishing company Simon & Schuster. He got the book translated, allowing the English world to follow the transformation of Bambi from a weak and powerless fawn into a mighty stag and Great Prince of the Forest.

Ohio State University professor Paul Reitter contends that Salten, a Jew that faced discrimination in Austria, wrote the story as a metaphor for the Jewish existence in Europe, arguing, “Could the deer living in a forest ever trust that human hunters would let them live in peace? That echoes a haunting question for Jews” and antisemitism in 1920s Europe.

From 1933, efforts were made to animate the story but the technical limitations of animation at the time prevented making the film, until Walt Disney was able to overcome all obstacles and in 1939 started making the now iconic cartoon, eventually spending three years on the project before releasing the movie in 1942. A close adaption of the book, Disney was able to use a loophole in copyright law to try and avoid paying Salten a dime.

Almost a decade before the 1928 debut of Mickey Mouse (in Steamboat Willie), animator Otto Messmer and his boss Pat Sullivan were trying to create a marketable character, toying with a cartoon black cat. After months of tweaking, two films were released: Feline Follies on November 9, 1919, and on November 16, 1919 it was Musical Mews (a film that has been lost). But the cat in these films was a prototype dubbed Master Tom. The first film with a cat named Felix was The Adventures of Felix, released on December 14, 1919. It was the first character created solely for the film industry, the first character to reach a high level of fame, and also the first character to be licensed and merchandised, bringing in huge money for Sullivan’s animation company.

One of the most popular cartoon characters, Felix the Cat has been beloved by millions for decades. His image has adorned everything from being the oldest recognized mascot in the state of Indiana to the official emblem of the United States Navy strike fighter squadron VFA-31, the second oldest Navy Fighter Attack squadron operating today. Come January 1, 2019, any Felix cartoons released in 1923 or before will be released into the public domain.