For anyone who’s ever traipsed through a renaissance festival while chomping on a turkey leg and quaffing over-priced ale, Celtic culture is typically associated with Scotland, Wales and Ireland. However, the Celts originated primarily from central Europe before eventually rampaging their way into other regions during the Iron and Medieval Ages.

Although Celtic people are not a distinct racial or genetic group, they emerged as a multitude of disparate clans, sharing a variety of common rituals, language, and customs — especially in the art of warfare.

In short, the Romans were terrified of them. Hollywood would later immortalize them. But alas, separating fact from fiction can be more challenging than a middle-aged actor attempting his own stunts (or a convincing Scottish accent for that matter).

10. An Enduring (and Complicated) Legacy The Greeks called them the Keltoi (Latin variant: Celtae) which is most likely how these diverse tribes came to be known as Celts. Other names include Galatians, Walhs, Picts, and Gauls. But to the haughty Romans, they were disparagingly labeled as “barbarians” with exaggerated claims of charging into battle inebriated without any clothes. But to be fair, drunk and naked brawling remains a time-honored tradition and is usually the highlight of most episodes of COPS.

Unfortunately, the Celts spent considerably more time feuding and fighting than penning their memoirs and left behind virtually no written records. Nonetheless, archeological evidence provides at least a partial glimpse into their martial prowess and unabashed zeal for bloodshed.

It’s also worth noting that the Roman Empire never occupied Ireland, allowing the Celtic culture to survive longer on the Emerald Isle than anywhere else.

In the annals of military history, the practice of collecting body parts as war trophies is not altogether uncommon. The Celts, however, raised it to another level. Based on their pagan, Druidic spiritual views, they believed the soul lived inside a person’s head and would decapitate enemies as a way of harvesting power and instilling fear in future victims.

Heads of the vanquished often adorned Celtic spears and dangled from the saddles of horsemen and chariots like fuzzy dice on a tricked out hot rod. Additionally, skulls were frequently used as a favored decorative motif in several art forms.

The Roman historian Diodorus describes another element of the Celts’ macabre hobby: “In exactly the same way as hunters do with their skulls of the animals they have slain…they preserved the heads of their most high-ranking victims in cedar oil, keeping them carefully in wooden boxes.” The oft-quoted creed, “Live fast, die young and leave behind a good looking corpse” could have easily applied to the ancient Celts. So would “Dressed to Kill.” One account notes “a love of decoration…they wear ornaments of gold, torques on their necks and bracelets on their arms and wrists, while people of high rank wear dyed garments besprinkled with gold.”

Celtic fighters made an equally bold statement with their coiffures, using lime water as a means to both lighten and spike their hair, creating a stylish look that would make Billy Idol jealous. And in part of Britannia, the Picts painted their bodies with woad, a flowering plant that produces a dark blue dye (Pict means ‘painted people’ in Latin).

Better hair, flashier bling, and tribal ink are usually enough to win most battles, but the Gauls also benefited from being more muscular and several inches taller than their rivals. So much for the adage, “you can’t have it all.” 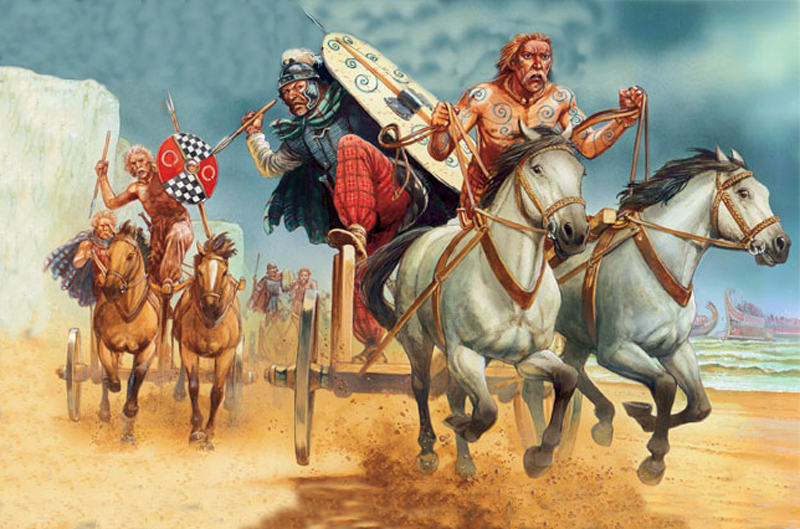 The effective use of chariots played an integral role in Celtic warfare.  Although the Egyptians are credited with introducing horse-drawn carriages into battle, the Celts made vast improvements in the overall design and battlefield tactics.

Each chariot typically relied on a pair of horses and manned by a driver and a soldier. After engaging the enemy, the warrior either launched javelins or exited the vehicle to fight as an infantryman. The skilled driver could then circle back later to retrieve the wounded or grab any available spoils of war.

In Book V of The Gallic Wars, Julius Caesar heaps praise on the expertise he witnessed: “In chariot fighting, the Britons begin by driving all over the field hurling javelins and generally the terror inspired by the horses and the noise of the wheels are sufficient to throw their opponents’ ranks into disorder … By daily training and practice they attain such proficiency that even on a steep incline they are able to control the chariots at full gallop, and to check and turn them in a moment.” 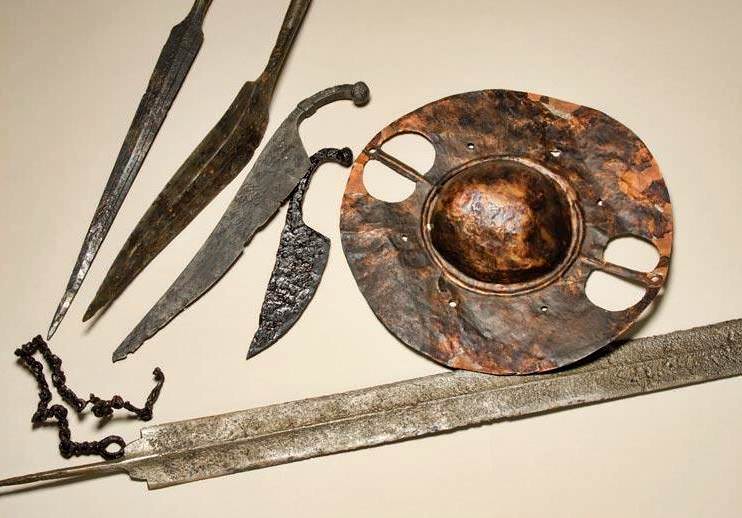 Not surprisingly, the preponderance of Celtic tribes produced a vast array of weapons reflective of their warring culture. The Gauls armed themselves with long, two-handed axes and hammers; Picts were known to use light crossbows in combat, and Iberians (modern Spain) utilized a short double-sided sword designed for stabbing in close quarters.

A variety of long and short spears included javelins made from an ash wood pole measuring six and a half feet in length and fitted with a large, leaf-shaped spearhead. Young warriors or those unable to handle heavier implements used slings to hurl smooth, current-worn stones taken out of rivers.

The arrival of the Iron Age around 1200 BC led to more advanced types of weapons and killing efficiency. Later, the widespread production of steel not only created superior swords and spear tips compared to earlier bronze equivalents but also weapons capable of piercing body armor and shields. The Celts often combined artistic flair and advanced metallurgy to craft impressive defensive armor. Archeological digs have revealed spectacular discoveries such as the Battersea Shield (decorated in the La Tene style) and ornate helmets — some of which featured hinged wings that could actually flap. But their invention of chain mail remains their most significant and iconic contribution to warfare as well as becoming a fan favorite of LARP enthusiasts worldwide.

The etymology of ‘chainmail’ comes from the French word “maille” which is derived from the Latin “macula” meaning “mesh of a net.” The construction involves the interlinking of iron or steel rings, the ends of which were either welded or riveted to form a flexible garment such as a shirt or hood. Although not infallible against pointed swords or spears, chainmail provided the earliest form of metal-constructed body armor worn in combat.

Tribes from Cisalpine Gaul in northern Italy were known to possess chainmail as early as the 3rd century BC. The Romans later adopted a form of chainmail called lorica hamata as the standard protection of its infantry legionaries.

Chainmail is still used in various industries today, such as gloves to protect the hands of butchers, and full suits worn by shark divers. Unlike the delightful 1953 rom-com romp, Roman Holiday, starring Gregory Peck and Audrey Hepburn, the Celtic version in 390 BC resembled more of a blood-splattered horror flick that left the fabled “Eternal City” in total ruin. A detailed account by Livy describes the dramatic raid in which the invaders descended so quickly that “Rome was thunderstruck by the swiftness at which they moved.”

Although modern-day historians debate the actual number of Celts involved (most likely around 12,000) and the actual date (some say 387 BC), the Battle of the Allia ultimately determined the Romans’ shocking demise. The majority of the fighting took place at the confluence of the rivers Tiber and Allia, roughly ten miles north of Rome. Led by Brunnus, a Serones chieftain from Cisalpine Gaul, his forces easily dispatched the overmatched defenders en route to sacking the storied capital.

Roman leaders attempted to bribe the victors by offering one thousand pounds of gold in exchange for their freedom. A dispute over the weights used to measure the loot (the Gauls had brought their own) resulted in Brennus throwing down his sword onto the scales and uttering the famous decree “Vae victis!” (“woe to the conquered!”). In other words: we won, you lost — now pay up. The Celts, like most ancient civilizations, functioned primarily as a patriarchal, male-dominated society. Celtic women, however, possessed far more freedom and rights than their Greek and Roman counterparts. They were also allowed to train and fight as soldiers, including the legendary Boudica (also often spelled Boudicca), who led a successful revolt against the Romans in AD 61.

Following the death of her husband, King Prasutagus, Boudica presided over the Iceni in eastern Britannia. Prasutagus had previously established diplomacy with the Romans and struck an agreement, naming his two teenage daughters as heirs with Boudica serving as regent until they became of age. But the Romans quickly reneged on the deal and after raping the daughters, the provincial leaders had Boudica publicly flogged out of contempt for the female ruler. Big mistake.

The warrior queen responded by rallying the Iceni and united other tribes whose rage against the Romans had reached a tipping point. Inspired by their warrior queen, the Celts destroyed the Roman administrative town of Londinium (modern-day London) and sacked two other towns before finally succumbing to the weight of the greatest empire the world had ever known. As a final act of defiance, Boudica poisoned herself, and thus forever cemented her well-deserved immortality. Hail to the Queen. In much the same way Bouddica is revered in Great Britain, the Gallic warrior Vercingetorix equally shines as the first national hero of France. He is best remembered for his cunning military expertise and defending his homeland — and the man who nearly defeated Julius Caesar.

Vercingetorix became king and chieftain of the Arverni during the Gallic Wars in 52 BC. Up until then, Caesar had been able to exploit divisive factions that stymied the fiercely independent tribes within the region. That soon changed with the arrival of an exceptional Celtic leader, whose name roughly translates to “the greatest king of warriors.”

Described by ancient historians as tall, handsome and charismatic, Vercingetorix immediately established an alliance with other regional groups. He led the combined forces, utilizing guerrilla warfare tactics and a scorched earth policy to rebel against a common and reviled enemy.

At the Battle of Gergovia, the Gauls triumphed, forcing Caesar’s mighty legions to retreat. Vercingetorix followed up his victory by attacking a Roman-held fortress at the Battle of Alesia. There, Caesar mustered all his of his own charisma, uniqueness, nerve, and talent to thwart the Celts offensive. In an effort to spare his soldiers from annihilation, Vercingetorix surrendered himself to Caesar, who had him imprisoned and eventually executed in 46 BC. Two years later, Caesar met a similar fate, providing the reminder, ‘Beware the Ides of March.’ The import of battle-hardened mercenaries can be found throughout history ranging from the Apaches in the American southwest to the Samurai in feudal Japan. And for over 500 years in Europe, the Celts routinely served in foreign armies in need of soldiers of fortune.

The presence included campaigns with Pyrrhus in his victories against the Romans at Heraclea and Asculum; Ptolemy II feared his band of 4,000 Gauls might eventually conquer Egypt for themselves, and had them marooned on a deserted island in the Nile; and the famed Carthaginian General Hannibal employed large numbers of the Gaesatae during the Second Punic War.

At times, however, Celtic fervor served as a liability. In Gaul, Caesar wrote: “there are factions, not only in every state and every village and district but practically in each individual household as well.”

Flash forward to the 21st century and the same combative spirit is still very much in places like Dublin and Belfast, where gang warfare continuously rages in turf wars between feuding clans. Similarly in Glasgow, “Old Firm” rivals Rangers and Celtic maintain this blood-spilling spectacle every season to the delight of frenzied crowds.