Georgia, the country at the point where Eastern Europe and Western Asia meet in the Caucasus Mountains, is a lesser known but remarkable country with spectacular medieval sites, modern interest points and striking geography and culture. The nation is also the birthplace of notorious Soviet kingpin and WWII Allied forces leader Joseph Stalin, who on one hand helped to stop Hitler but, on the other hand, became known as a despot in his own right. In this account, we discover the real Georgia and the must see places in this geographically Asian but, culturally, rather European country that has both a colorful history and present. Built on the banks of the Georgia’s Aragvi River near the capital city of Tbilisi is the spectacular Ananuri Castle Complex. The multi-spired castle offers a thrilling taste of the medieval coupled with amazing natural scenery surrounding. The site was the place where epic battles unfolded as the seat of the Eristavis, the Dukes of the feudal dynasty Aragvi since the 13th century. Located approximately 40 miles away from Tbilisi, the complex was created in the 17th century, then used up until the 19th century. And what a range of colorful and sometimes disturbing events this castle complex has been witness to!

The fortress was the site of the Aragvi clan massacre, revolts by organized groups of peasants, and catastrophic fire damage. In addition to being a battle site, the complex is also one of religious historical value. Two castles making up the site are connected with a wall in the form of a curtain, while three churches form the remaining significant portions of the Ananuri Castle Complex. While drab in color, the striking shapes and picturesque setting make the castle one of Georgia’s most attractive heritage sites. Perched in the Caucasus Mountains, the Gergeti Trinity Church is a spectacular ancient Georgian structure and religious cultural relic that is positioned amongst scenery so grand that it easily dwarfs the already grand buildings of the church. Located close to the village of Gergeti and close to the town of Stephantsminda, Gergeti Trinity Church is an earthly historical relic extraordinaire in a harsh landscape that recalls parts of Venus or Mars given the stark, rocky brown hills that rise sharply like crater walls behind the church. The setting of Gergeti Trinity Church, which dates back to the 14th century, is on a peak close to Mount Kazbegi, an especially high and spectacular mountain in the Caucasus.

The church requires a three hour climb in difficult terrain, but can also be accessed by taxi — though the ride is on a rough road. The construction of the church is distinctive in all of Khevi province, and so is its history. When Tbilisi Persian invasions took place in the 18th century, Mtskheta artifacts including the iconic St. Nino’s Cross were stored for protection in the church. Gergeti Trinity Church now functions as a Georgian Orthodox and Apostolic Church, having been previously banned under the Soviet regime.

No visit to foreign lands is complete without realism and acknowledgement of the darker chapters of human history. The birthplace of Joseph Stalin is located at the Joseph Stalin Museum, in Gori, located in the west of Georgia. Born Ioseb Besarionis dze Jughashvili in 1878 in a wooden hut preserved as part of the Joseph Stalin Museum to poor parents when Georgia was part of the Russian Empire, the man who changed his name to Stalin (meaning Man of Steel) was a Georgian Revolutionary turned outlaw and subsequent Soviet Russian head of state. He instituted one of history’s bloodiest regimes, overseeing purges and mass executions along with frequently deadly exiling of enemies real and perceived, potential and active, to remote gulag labor camps.

The Allied nations did recognize a source of help in the Soviet Union and cooperated with Stalin in the fight against Adolf Hitler, despite having initially signed a non-aggression pact. However, the brutality of the Stalin regime stands out starkly as a dark epoch of linked Georgian and Soviet history. Stalin’s Red Army was often an instrument of fear and has become known for having committed war crimes during World War II despite his orders not to harm civilians. Georgia is home to a remarkable but bizarre mountain monastery constructed in the 12th Century known as Vardzia, which is located near to Aspindza. This incredible location includes many strange mountainside excavations, which resemble the homes of mythical creatures but are in fact part of the monastery. Interestingly, the construction was completed under the reign of a female king — and yes, you heard that right. The 12th century Georgia Monarch King Tamar was a woman who became the first female to be crowned as a king in the history of Georgia.

Mongol invasion threats prompted King Tamar to go to incredible lengths in the year 1185 by initiating the excavation of an enormous refuge out of Erusheli mountain in the south part of Georgia. Her monster project led to the creation of a subterranean castle fortress with no less than 6,000 residences, a throne and an entire church, complete with its bell tower. The fortress could be reached through a tunnel, concealed by the banks of the Mtkvari river, while the outside was cloaked in farmland. The incredible construction was a powerful bulwark against Mongol raiders but it was split asunder by a huge earthquake in the year 1283, less than 100 years after it was built. The remains are the ruins visible to tourists. 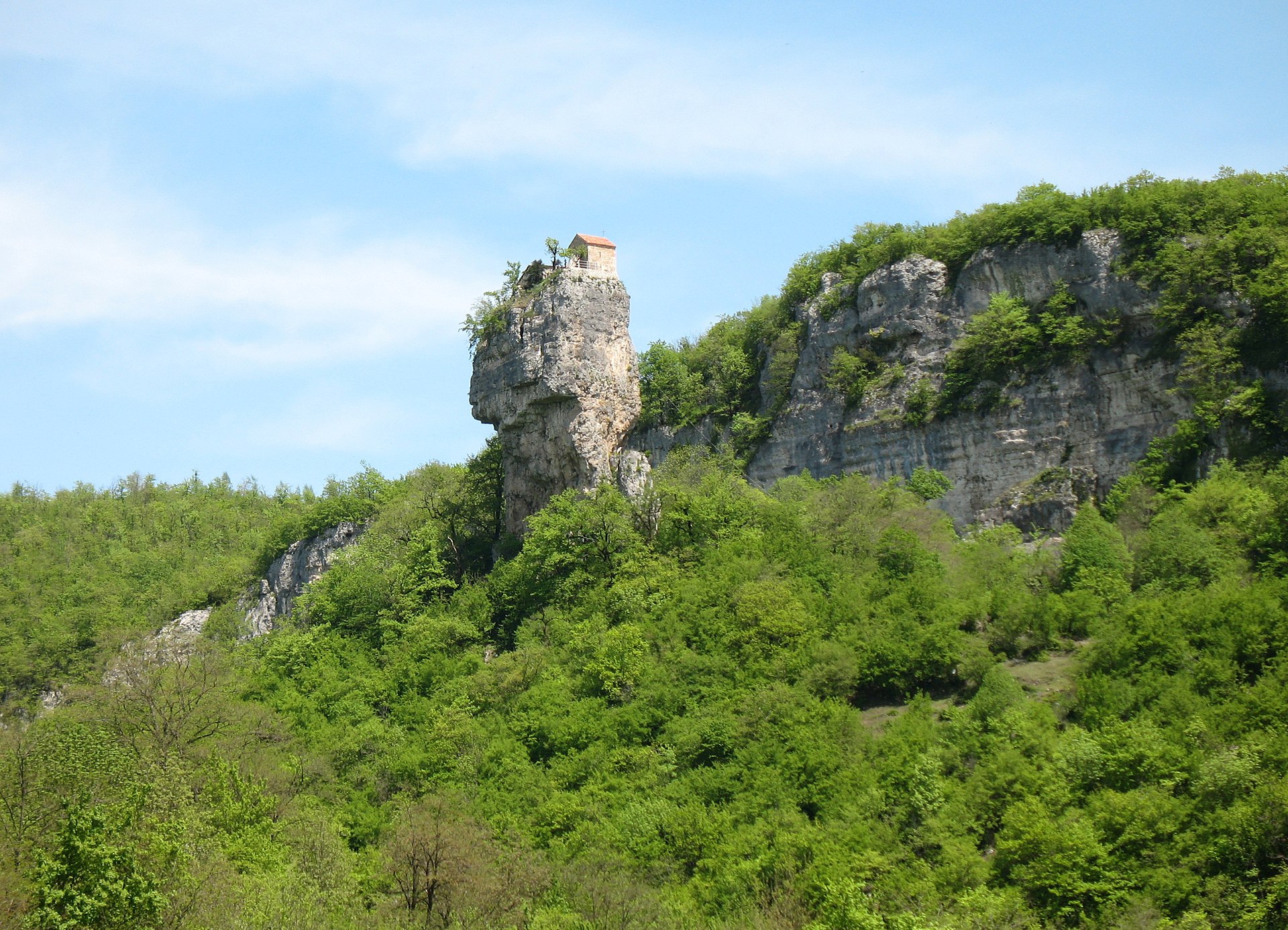 Georgia’s varied landscape is home to a strange geological formation that has developed architectural and religious intrigue as one of the most captivating sites in the country. Still a mystery of culture and architecture, the 130-foot-tall Khatskhi Pillar in western Georgia’s Imereti region is a unique monastery that represents a most unlikely feat of construction. The giant pillar is formed of limestone and protudes above the surrounding wooded hillside like a very thick stone tree. With its sheer sides, the site of a monastery perched on top has to be seen to be believed.

A tiny church called St. Maximus the Confessor’s is the most prominent feature, measuring just 12 by 15 feet. Three small cells are also positioned on top of the pillar, intended to house monks. A substantial wine cellar was also found, upon modern exploration. Access to the top of the pillar is possible only by climbing a dangerous steel ladder with great effort. In ancient times, the pillar was used by Christian ascetics seeking connection with the spiritual and separation from the material world. In modern times, it is once again occupied monastically, used now by Stylite monk Maxime Qavtaradze. Uplistsihke is one of the best historic sites of interest in the world, with an element of tragic history. A ghost town of incredibly ancient origin, Uplistsikhe translates to “Fortress of the Lord” in English. And what a fortress it is! Carved from the rocks of Mtkvari River’s upper banks, the eastern Georgian relic is over 3,000 years in age, being established at about 1000 BC through incredibly laborious construction by excavation and exterior shaping.

The establishment of Uplistikhe was followed by constant human habitation up to the 13th Century. The town had all kinds of amenities, including a bakery, but what makes it really strange is how it’s carved out of the rock and resembles the dwellings of mythical fairy world creatures. In the 13th century, the rich cultural history came to a standstill after being ransacked by Mongol invaders who looted the city and inflicted significant damage. Among the fascinating discoveries made onsite were a number of religious sites that pre-dated Christianity and indicated worship of sun and moon deities.

Georgia is commonly thought of as a warmer country, and much of it is, but some extreme natural features are in the land that could bring the careless an icy death. In the Caucasus Mountains of Georgia the huge Gergeti Glacier extends its icy tongue over the rocks. Filled with vast icy slopes, flat ice fields and exceedingly treacherous chasms and crevaces, the Gergeti Glacier is a must-see site in Georgia, albeit one to approach with great caution. The crevices are absolutely terrifying, ready to turn a misstep into your last. The trail to access Gergeti Glacier begins in the village of Kasbegi, advancing up valley and mountain terrain.

The glacier itself is to only to be accessed by the adequately trained and prepared. Not only are there nasty crevices, but these death traps may be concealed by snow coverings. Furthermore, steep slopes could lead to a simple slip causing a much greater fall in places. The tongue of the glacier itself plunges into a stony, carved out valley, contrasting masses of ice with rocky and dusty soil and boulders.

Georgia’s capital city, Tbilisi, is home to 100 ethnic groups and spectacular sights fusing ancient and modern architecture. The Chronicle of Georgia stands out as one of the most dramatic large scale works of art in the city. Looking a little bit like a modern version of Stonehenge in some parts, the Chronicle of Georgia is a spectacular giant monument to Georgian history. It depicts, in a series of intricately detailed yet gargantuan columns and lifelike statues, the key points of significance in the country’s cultural and religious history. The columns illustrate the life of Christ at the monument’s lower points, progressing to statues that show the kings and queens of Georgian history.

While awe inspiring, the work is not entirely complete. The Chronicle of Georgia’s creator, Zurab Tsereteli, was born in Georgia and trained under Soviet rule, starting work in 1985. Despite his extensive progress, the monument remains incomplete. Interestingly, locals have limited awareness of the great work, despite its cultural relevance and high potential as a tourist attraction.

2. The Ghostly Cable Cars of Chiatura

Georgia’s mining industry has left behind a fascinating relic for tourists to marvel over. The Georgian town of Chiatura bears the largest deposits of Manganese in the Caucasus Mountains, which spawned a once huge industry on a grand scale during the Soviet era. Chiatura’s seven mines and eight quarries presented logistical challenges for workers traveling from the valley bottom settlement to extraction sites far up the steep river valley’s sides. To resolve the access issues and improve efficiency for the hungry Soviet regime, a vast system of cable cars, mounted perilously on cables was installed, linking mining areas with the town below. The installation took place in 1954.

In modern times, no less than 17 of Chiatura’s old, rusty and rickety looking cable car routes remain employed for transport by residents of the western Georgia city. The tiny cable cars not only induce fear of heights and possible motion sickness but are positively claustrophobic in their design. Tiny, the cars give people the feeling of stepping into flying coffins, notorious for their deteriorating condition, having gone without significant maintenance since the 1950s.

Georgia is known for some extremely eye-catching attractions thanks to talented public artists. One of the most spectacular works must be the statue of the Mother of Georgia, known as Kartlis Deda by the sculptor and Georgia native Elguja Amashukeli, which represents and personifies Georgia. She stands just over 65 feet tall and was crafted from aluminum in great detail, showing her in dress characteristic of Georgia.

Kartlis Deda was placed on Sololaki Hill in 1958, the year of Georgian capital city Tbilisi’s 1,500 year anniversary. The giant sculpture is complete with a vessel of wine offered to friends of the nation, while the sword held in her right hand is there to ward off adversaries. Rising above the surrounding coniferous trees and hill ground, the sheer scale of the sculpture is arresting and spectacular, a form of public art that offers tourists an experience of the awe inspiring nature of monumental sculpture and architecture.