The idea of a gender reveal party is a fairly new one. They seem to have sprung up in the last decade or so and have spread like wildfire, sometimes literally. The point of a gender reveal is to gather your friends and family together to make a surprise announcement about the gender of the baby that you’re expecting. Initially, this was done in some very simple and quaint ways, such as people cutting into a cake and discovering if the icing inside was blue or pink, for instance.

Unfortunately, we can’t have nice things in this world and people need to do everything bigger and better than their neighbor. That means that pink and blue cakes had to give away the pink and blue smoke shot from cannons, or pink and blue explosions caused by chemicals added to canisters of tannerite that were shot and blown up in a field. As you can imagine, some of those gender reveals have been more intense than others.

You’d be hard-pressed to find a gender reveal that went more wrong than the one that started in Southern California toward the end of the summer of 2020.

Within days, the fire that had started as a result of the gender reveal explosion had destroyed 7,000 acres of forest and caused thousands of residents to flee their homes. California was in the midst of a record-breaking heat wave at the time when the pyrotechnic device meant to give off colored smoke caused the dry grass nearby to ignite.

Incredibly, this is not the only wildfire caused by a gender reveal gone awry, nor is it the worst. In 2018, they charged a border patrol agent after his baby’s gender reveal party sparked a blaze that destroyed an astounding 47,000 acres throughout Coronado National Forest. They gave the agent five years’ probation and ordered him to pay $8 million restitution.

Not even the skies are safe from the scourge of gender reveal mayhem as witnessed by an incident in 2019 when a single seater plane stalled out mid-flight and hit the ground. The idea for this reveal was that the plane was going to essentially crop dust the family and friends below by releasing 350 gallons of colored liquid to fill the sky.

Instead of going as planned, the plane’s engine stalled when the plane dipped too low and lost too much speed. It was no longer able to aerodynamically fly and hit the deck. The pilot and one passenger sustained some injuries but nothing life threatening. The plane, however, sustained serious damages. Stacie Childs-Wright and her husband Chad wanted to do a gender reveal in 2019 so they came up with a novel idea that required an assist. They filled a balloon with colored powder so that when it popped a cloud would appear and indicate the gender of the baby. So far, so not potentially deadly.

The couple took things to the next level when they decided that popping the balloon the old-fashioned way was too boring. Instead, they recruited the family alligator to bite the balloon and release the powder.

Naturally, this is not the only time an alligator has been used for a gender reveal. Another family opted to use the pet gator as a prop by having it bust open a watermelon to reveal the baby’s gender as colored jelly squished out. That video was met with some serious blowback, as people called it animal abuse. Most gender reveals gone awry these days rely on the use of a small explosive device. The word “small” is, of course, relative, and some families choose to go bigger and more dangerous to make a scene. But the anticipated result is nothing more than an explosion of colored powder.

For one Michigan man, this explosion proved fatal when the device, described as a cannon, completely exploded. It was not meant to be filled with any kind of projectile, but just like a gun loaded with blanks can still prove deadly, the device must have been rigged incorrectly.

When the cannon went off, it exploded entirely, sending shrapnel in all directions. Pieces were later found in nearby cars and enough pieces struck a 26-year-old man nearby that doctors were unable to save his life.

Lest you think gender reveals are strictly an American phenomenon, it’s worth knowing that in 2019 on Australia’s Gold Coast, one family’s attempt at a gender reveal ended with a flaming automobile.

While Americans like explosions, Aussie’s seem to have a penchant for burnouts. That’s where you gun the engine of a car and shoot smoke out of the exhaust. In this case, additives make the smoke come out a certain color for the gender reveal.

The problem with a burnout is the burn part. Cars aren’t meant to burn and produce thick smoke normally. So the result is that your car overheats and potentially lights on fire, as was the case with this one is Australia.

The two people in the car were able to escape as the smoke overwhelmed the car, but the driver was charged with dangerous operation of a motor vehicle. One of the big problems with gender reveal explosives is that they’re not really regulation devices. People make these things themselves, and the result is that they are far from safe and reliable. The difference between a gender reveal device and a homemade bomb is often just the addition of colorful powder.

At one gender reveal party in Iowa, things got out of hand in the worst way when the homemade device became little more than a pipe bomb. A metal tube had been welded to a metal stand and a small hole was drilled in it for a fuse. After it was filled, the top was taped down so securely it couldn’t detonate as planned. 66-year-old Pamela Kreimeyer, the grandmother-to-be was killed by flying shrapnel when the gunpowder-infused device exploded causing the metal case and stand to shatter.

To give you an idea of the force behind the explosion, Kreimeyer was standing 45 feet away. The shrapnel that caused her death went through her and landed 144 yards away. Back in the day before hilarious internet videos were a thing, we could still laugh at the misfortune of others on video thanks to shows like America’s Funniest Home Videos. One of the surefire ways to get a laugh from a crowd was to show a video of a kid accidentally hitting his dad with a baseball bat. People find that level of pain quite amusing. And then there’s this.

Eschewing the explosives that had led to so many accidents in the past, one couple wanted a gentler gender reveal and opted to have dad swing a bat and explode a baseball. The ball would release the tell-tale puff of colored powder and everyone would ooh and ahh. Except dad hit mom in the face.

The man’s swing hit the mark and caused the ball to explode in a puff of blue, but his follow through was too powerful and his wife was standing too close. The bat dinged her a good one in the melon and her husband quickly tried to soothe her, but the damage was already done. 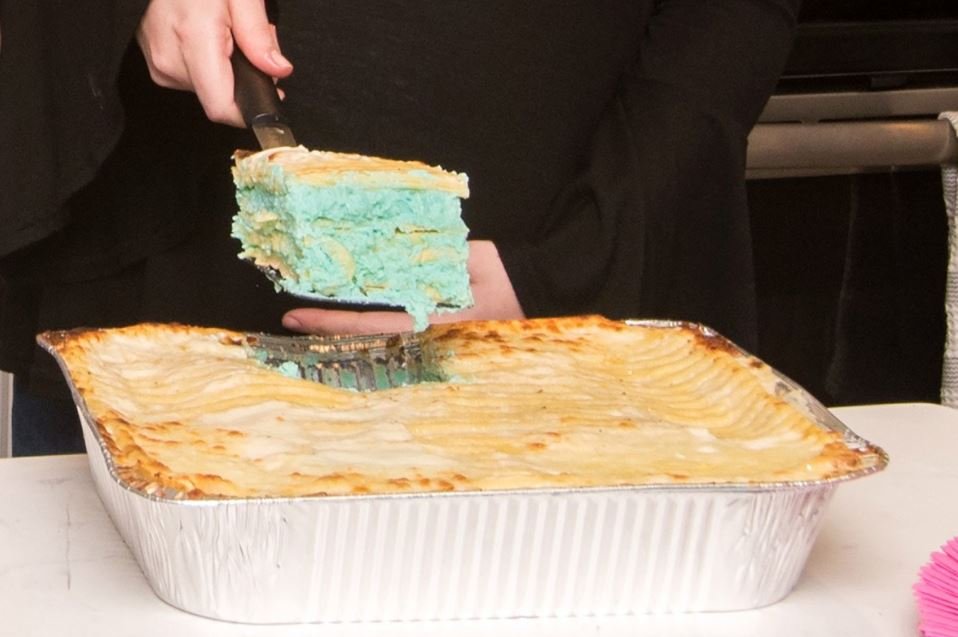 One thing people seem to forget about gender reveal parties is that they are parties. Who wants to be exploded? No one. But everyone at a party wants snacks. So why not find a way to mix the reveal with a delicious treat for everyone? That had to be the thinking behind the gender reveal lasagna.

Normally lasagna features layers of pasta, seasoned meat, cheese, and sauce. You can shake up the recipe hundreds of ways, but the layers are a consistent part of the dish. So Villa Italia Kitchen in New Jersey was arguably well within their rights to make a lasagna that was packed to the gills with baby blue cheese.

If the description is unappealing, the visual is more so. The lasagna seems to be purely pasta with ricotta and maybe a cream sauce, but all of it is dyed on the inside a pale blue that borders on green. It’s not a natural shade for food, and many people who viewed the dish on social media felt it was an insult to an Italian classic. There’s no really polite or classy way to address this entry, and maybe that’s part of the point. You either find this idea funny and maybe charming, or absolutely appalling. But remember, this was done in front of a small crowd of onlookers, plus the entire world, who later saw it on social media. The video has actually been viewed over 17 million times at this point. What video, you ask? The fart reveal video.

Now obviously explosions have a long history in the world of gender reveals, and just as much history causing murder and mayhem. So any gender reveal in which no one gets hurt can technically not be the worst gender reveal ever. However, this particular reveal was not the sort of thing you’d consider mainstream by any means.

Paige Gunn became Twitter infamous when she shared her gender reveal video. It features Gunn lying on the floor in a shirt with no pants and her butt exposed. It looks like you might be in store for something a little adult-oriented at first but then, as if by fel magic, her body moves ever so slightly and a cloud of blue dust shoots out of her behind. She farts out her gender reveal as the camera pans over to excited friends and onlookers. It’s exactly as weird as it sounds.

Apparently the powder was colored baby powder, so we’re all left to puzzle over the nature of the setup for this video. Then you can spare a moment to wonder if the child will ever see this later in life. It’s got to be a weird thing to learn about your mom.

The sheer destruction of forest fires is one thing when it comes to gender reveals gone wrong but if nothing else you can take some small comfort in those being accidents. No one was cruelly trying to cause destruction there. Not so for the chaotic gender reveal that took place at a party in Ohio back in 2019.

By the time the dust settled on this gathering, one woman was dead and eight others were injured. But there was no explosion here. Instead, this was a pre-meditated attack and murder.

Vandell Slade was the shooter, along with three other men who it was thought wanted to kill the mother-to-be Cheyanne Willis. Adding another layer of weirdness to the whole story, Willis was later determined to not be pregnant at all, so the entire gender reveal was actually just a hoax.

Police were initially told that Willis lost her baby after being shot in the leg. They found out later that this was untrue. But during the course of the investigation it was determined that several of the people at the party had ties to local drug rings and the killers were apparently hired to take them out. Their actual victim, Autumn Garrett, was just an innocent bystander.