No matter how many millions of dollars the studios spend on a movie, mistakes or bloopers are inevitable. Most of these mistakes are continuity errors or something may be visible that shouldn’t be visible. Some pedantic moviegoers watch out for them like hawks and pounce. To be honest, most of us don’t even notice until it’s pointed out to us. Here are some of the more, shall we say…obvious ones…that slipped through the net. 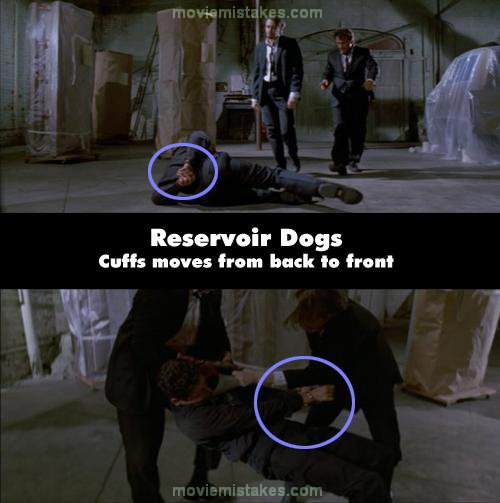 in which a police officer named Marvin Nash is tortured by three of the gang to the sound of the Stealer’s Wheel song, ‘Stuck In The Middle With You’. Nash’s hands are handcuffed and they keep switching from being cuffed in front of him and being cuffed behind his back throughout the scene. 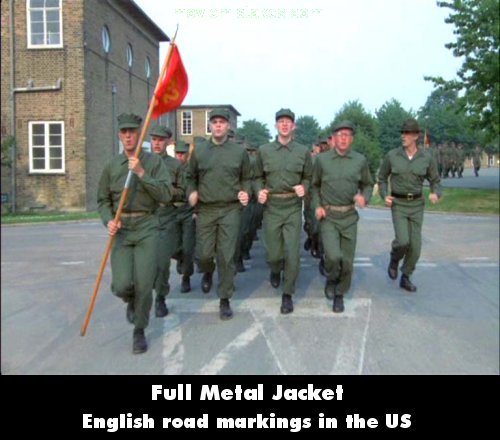 Kubrick filmed his anti-war movie in England, skillfully using locations to create the story. The attention to detail slipped up however, in the scene where the Marines are jogging in the ‘training camp’. The road they are jogging on shows British road markings, which would not be seen in the US.

8. The Lord of the Rings: The Return of the King 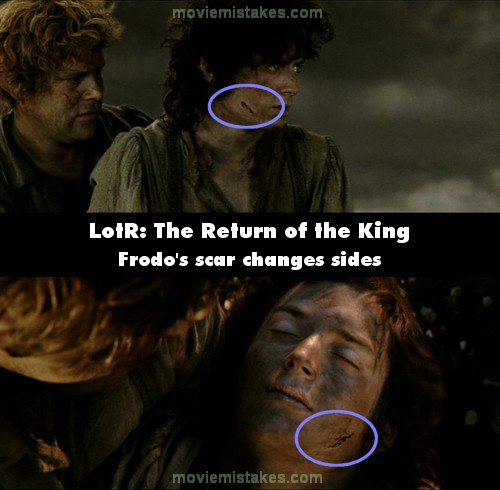 Fake wounds are common in action scenes and it’s good to remember where they are on the body, so continuity between takes is maintained. Frodo has a scar on his face for part of the film. It keeps changing position and size. It must be the work of wizards (or the make up department).

In the youtube movie clip you can see the “live” movie feed (2:38 mark) which is actually a Quicktime movie being played. Maybe the movie makers thought since this was an Apple Macintosh application most people wouldn’t recognize that it was obviously a pre-recorded movie. The storm effects are pretty good, though.

Gladiator brought back the Roman epic, aided by modern CGI special effects and impressive fight scenes. During the Battle of Carthage, a chariot is knocked on to its side and hits a wall, whereupon a blanket lifts up to reveal a gas cylinder in the back. What did the Romans ever do for us? They didn’t introduce a gas supply, that’s for sure.

5. Pirates of the Caribbean: The Curse of the Black Pearl

The Pirates of the Caribbean franchise revived swashbuckling for a modern audience. In the scene when Captain Jack Sparrow says, ‘on deck, you scabrous dogs’, a crew member is clearly visible looking out to sea, dressed in a tee shirt and cowboy hat, and sporting a pair of sunglasses.

Everyone is aware of Janet Jackson’s Super Bowl wardrobe malfunction, but the first wardrobe mishap actually occurred during another Championship Game – between the Beavers and the Dragons. In the final victory scene you see Scott’s dad coming out of the crowd to congratulate him. There is a fan behind him who exposes himself to the camera. While Janet’s exposure made the headlines, this exposure may be what started it all.

After chasing down the unscrupulous Sully, the yellow Porsche is wrecked on the left side. When Arnold commandeers the Porsche and drives it away, and it’s fine. Of course this may have been the first Transformers movie and we didn’t know it.

Someone should have widened the doorways on the Death Star. As stormtroopers burst into the room, one of them hits his head on the door frame. Ouch! At least he had his helmet on. The re-mastered version of the film is in on the joke and has incorporated a ‘thud’ sound effect. Noel Coward famously said, ‘learn the lines and don’t bump into the furniture’.

Instructing extras on how to behave in a scene is all-important. In a scene in a café at the Mount Rushmore memorial, a young boy in the background puts his fingers in his ears before the sound of gunfire is heard.  He’d read the script and knew what was coming!

Thanks to Movie Mistakes, they were instrumental in making this list.