Humans think about having the potential to live forever, while at the same time thinking of most animal life as short and sweet. We’re pet owners, after all. Pets don’t live particularly long. In nature, every winter sees many animals die after mating, and continuing on their next generation. On the farms, our food is planted in the spring and we harvest it just before it dies in the fall. Life is short, but humans defy this by living for decades.

However, we are not alone. Some animals outlive whole generations while some plants live for thousands of years. Well, until we occasionally come along and snuff them out. Here are 10 of the longest-living things killed by man… In May 2007, indigenous hunters killed a bowhead whale off the Alaskan coast. Usually, when they butcher the whales it is not unusual to find old stone harpoons and other weapons from past hunting attempts but these tools are difficult to date. But this time, embedded into the shoulder bone of the whale was an exploding harpoon that they were able to date to being used in 1890, meaning the whale survived the attack and lived a further 117 years with the harpoon under its skin.

Since 19th-century whalers would likely have only attacked large, mature whales, the whale was probably already in its teens. This allowed scientists to guess the age at around 130. Incredibly, it was probably not the oldest bowhead, either, as scientists estimate that other whales in the wild can live as long as 200 years. On June 21, 2013, Seattle native Henry Liebman was fishing the deep ocean off the Alaskan coast for his favorite prey: the Shortracker rockfish. Living in waters ranging from 83 feet to 3,960 feet, the fish haunt the ocean depths eating whatever shellfish they come across. A skilled fisherman, Liebman baited his hook and dropped it down to 886 feet when he got a bite.

After wrestling the fish to the surface he was shocked at the size of the beast. It smashed the Alaskan record for biggest Shortraker at 40 pounds. When researchers counted the growth rings along its ear bone, the world was amazed to find that Liebman had killed a rockfish that was about 200-years-old. Sharks have a bad rap. Australia, one of the top shark attack locations in the world, averages about 12 shark attacks per year. This compares to the 100 million sharks that are killed, sometimes just for their fins, worldwide every year. All those sharks taken out of the ocean have taken their toll. In Australia, studies have shown shark attacks, per million people, have actually gone down, probably due to being heavily fished even though we don’t know much about their lives.

One of the most heavily misunderstood sharks is the giant Greenland shark. One of the slowest moving sharks, it prowls the icy cold water around Greenland (duh). Due to it having no hard bones, scientists historically had no way to check their ages. Recently a method to determine the age was discovered: checking their eye lens nuclei. Researchers were shocked to discover sharks caught in fishing nets that were around 400-years-old. In and around Greenland there could be bigger, older sharks that haven’t been caught. There could have been even larger and older specimens before WWII, a time when they were heavily overfished for their livers, which were ground up and used as machine oil. After a synthetic oil alternative was invented, demand dropped and the overfishing of the Greenland shark eased. Also in the icy depths of the Northern Atlantic are the Quahog clams. These mollusks are known for their long lives, which are determined by counting the annual growth rings of their shells. This is useful for climate scientists as they can use these rings to check historic temperature levels year by year.

In 2007 it was reported that one large Quahog was pulled from a depth of 80 meters and killed so researchers could count its rings. They were stunned when they determined the shellfish was 405-years-old, making it the oldest non-colonial animal ever discovered. Like the Quahog clam, trees also make a new ring of growth every year. Climate scientists can use this data to track historic temperatures. This can be done by killing a tree, cutting it down and counting the rings from the center. Another non-lethal way would be to use a borer that drills into the tree and removes a long sample, which also shows the rings. This sample can then be counted, leaving the tree still standing and alive.

In 1964, geographer Donald R. Currey got permission from officials to take tree ring samples in Nevada’s Great Basin National Park. One of the species that grow in this high altitude area is the Bristlecone pine, which is famed for its age. Currey hoped that he could use its ring data to track glacier movements. For some reason, he decided not to use the tree borer, and just cut down the tree instead. When he got back to lab it was learned that he had killed the oldest tree ever discovered, estimated to be about 4,900 years old. Nicknamed Prometheus, the tree held the record until 2012 when an older tree was found – another bristlecone, which was 5,065 years old. 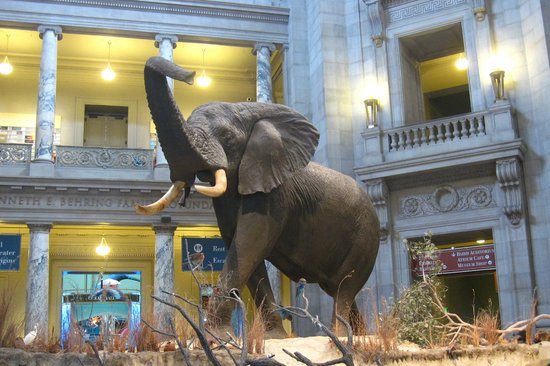 In the 1950s, Spanish big game hunter JJ Fenykovi was trekking through the Portuguese colony of Angola when he came across giant elephant tracks at a watering hole. So giant were these tracks that each footprint measured exactly 3 feet. He knew he didn’t have enough time to track the beast and vowed to return the next year to hunt it down. The giant elephant’s habit of returning to the same watering hole doomed it, as the next year Fenykovi was waiting. It took 16 high-caliber bullets from .416 Rigby rifles to kill the giant, which weighed about 8 tons, stood 13 feet, 2 inches tall, and was about 100 years-old.

Not wanting to waste such a specimen, Fenykovi had dozens of locals strip its 2 tons of hide and haul it to the ocean, where it was shipped to America, stuffed, and reassembled in the lobby of the Smithsonian, where it still stands. For decades it was the largest pachyderm ever killed until November 1974, when an elephant standing 13 feet, 8 inches was killed by a car salesman from Nebraska. The carcass from this slain giant was left where it fell, with only an ear and its tusks being kept as trophies. 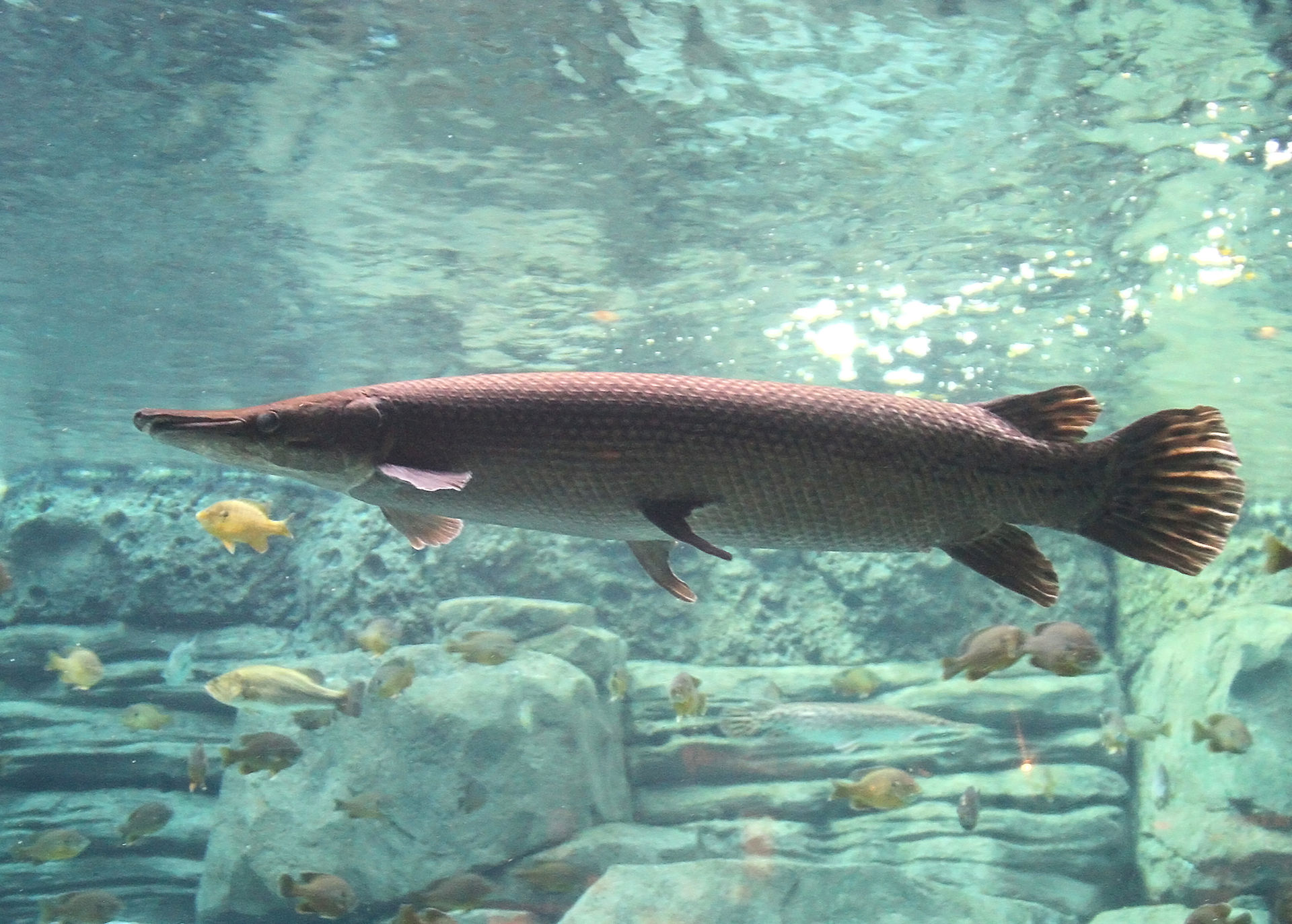 Alligator gar is an ancient fish that fossil records show date back to the time of dinosaurs almost 100 million years ago. They range from the Mississippi to the coastal region of the United States because they can inhabit salt and freshwater, as well as having adaptations that allow them to breathe out of the water. Historically this allowed them to live as far north as Kansas as well as the American coastal states.

On February 14, 2011, Kenny Williams landed a monster-sized Alligator gar near his home in Vicksburg, Mississippi. The dinosaur fish was so big he had to use nets to drag it onto his boat. Once it was weighed it smashed earlier records at 8.5 feet long, and weighing in at 327 pounds. Such a large Alligator gar was determined to be about 94-years-old. Lobster fishermen pull about 200 hundred million lobsters from the North Atlantic every year. In all those millions of lobsters are a number of oddities, including lobsters that are a bright blue. One of lobsters’ stranger features is their lifespan. Recently a study was published that proposed lobsters have the ability to live forever. While their DNA, in theory, has resistance to aging, lobsters need to molt or shed their skin.

As they get older, molting gets more and more stressful with about 15% dying from the effort required each time. If a lobster does get a bigger shell, the bigger shell has a greater chance that it will become infected, which will kill the lobster. The biggest lobster ever (that we know of) was caught off Nova Scotia, Canada in 1977. It weighed in at 44 pounds, 6 ounces and was believed to be around a 100-years-old. The ancient lobster giant was sold to a restaurant, where it ended up on the menu. Giant tortoises used to thrive on tropical islands around the world. The slow, meandering beasts grew to over one meter long and could weigh as much as hundreds of pounds. They also live incredibly long lives. An Aldabra tortoise, from the Seychelles, was famously gifted to British general Robert Clive of the East India Company. Clive became addicted to opium and killed himself in 1774. At some point, his tortoises were gifted to a zoo in Calcutta, India. One of the tortoises spent 130 years at the zoo before dying on March 22, 2006. This ancient tortoise, named Adwaita, “the only one” in Bengali, was already old when he was given to Clive, with researchers dating him to around 250-years-old.

Without human interference, Adwaita’s cousin tortoises who lived around the world most likely lived as long as well. Most of the giant tortoise species were driven to extinction when sailors first started to explore tropical islands. Tortoises have what turned out to be an unfortunate ability to live for long periods of time with very little food or water. This made them the perfect food source for long term sea adventures. Explorers and traders could easily visit an island and grab half a dozen giant tortoises that each weighed over a couple hundred pounds. They could then be stored on board alive and kept with very little sustenance, often stacked one upon the other. Then weeks into their sea voyage the sailors would kill a tortoise, as needed, and have some fresh meat. As the sailors sang their sea shanties they would be feasting on an animal that was hundreds of years old. Before the first successful English colony of Jamestown in 1607, before the Normans conquered England in 1066, before the birth of the Roman Empire, and over 1,000 years before Alexander the Great, a small bald cypress sprouted out of Florida’s earth shortly after 1500 BC. For the next 3,500 years, it grew proud and tall in what would become Big Tree Park in Longwood, Florida. Nicknamed “The Senator,” it stood 125 feet tall, with a trunk diameter of 17.5 feet, and was one of the oldest trees in the world.

On January 16, 2012, Longwood native Sara Barnes broke into the park, as she often did, to smoke meth. This night was particularly dark, so she gathered some wood to make a small fire so she could see her meth pipe. The fire quickly got out of control and Barnes decided to take out her camera and film the flames as they burned toward, and eventually consumed, “The Senator.” Look, she’s a meth addict. Wise decisions aren’t to be expected here.

Concerned neighbors called the fire department, but they arrived too late and could only watch as the ancient tree collapsed in a fiery blaze. Investigators were puzzled as to why the tree burst into flames and eventually placed the blame on a freak lightning strike. That was until word worked its way to police that Barnes had told her friends about what truly happened and had a video of the fire. The authorities raided her house and found the footage and drug paraphernalia. For killing a 3,500-year-old tree, she got 5 years probation, which she ended up violating in 2016. After her parole was rescinded, she was sentenced to 20 months in prison.