Even though it’s been going on two centuries since Robert Cornelius took both the first photographic portrait and first selfie in 1839, the practically obsolete art of capturing likenesses through other mediums has not died out. Plenty of people continue to have portraits painted of themselves even though it’s common for that to cost $15,000. Many even pay to make fun of themselves through a caricature artist.

It’s not enough to just have a technically perfect recreation. We feel the need to be filtered through a perspective, and that can be determined both through technique and medium. While there are many acclaimed examples of portraits created with very bizarre technique out there, such as many by Picasso, portraits made in highly unusual mediums can be very compelling as well. Unfortunately using a unique medium for a portrait will often be dismissed as a mere gimmick, even if there is a cogent artistic intent behind it. TopTenz will let you be the judge in the next 10 cases…

The history of making elaborate sculptures in such a fleeting medium as butter dates back to at least 1876, when an autodidact from Arkansas named Caroline Brooks made a bas relief of Iolanthe, the heroine of the Henrik Hertz play King Rene’s Daughter. That sculpture, which needed to be constantly kept over a pail of ice, would bring spectators from around the nation that would pay 25 cents apiece to look at it, and was featured in The New York Times. To think the only reason she’d started butter sculpting in the first place was to market the butter she was churning herself.

These days the most prominent butter sculptor is arguably Sarah Pratt, who became known for carving 600-pound sculptures of cows. The process of sculpting takes 10 or so days of sitting in large 40 degree refrigerators, and according to her it’s a very stinky process as her material inevitably starts to spoil. For special orders, she’s also done Neil Armstrong and Laura Ingalls Wilder. Despite everything, she claims that her sculpting work has not killed her taste for butter.

On November 17, 2016 the hosts of Vat19, a YouTube channel in St. Louis, Missouri, posted their making-of video for their portrait of the Great Emancipator. They took his most common likeness, and through carefully dipping some of them in salt and vinegar solution, assembled both tarnished and pristine pennies into a 9-foot tall, 6-foot wide image of the 16th Commander-in-Chief. It ended up taking $143.88 worth of pennies glued to roughly 99 sheets of 8.5-by-11 inch paper.

The portrait became so popular that Vat19 began selling kits to help their fans create their own miniature versions. For $19.99, plus the $8.46 in pennies that the customers had to provide themselves, they could have their own 18-by-24 inch mosaic. Some might consider that a bit mercantile, but what else could be expected of people who make art out of literal money? 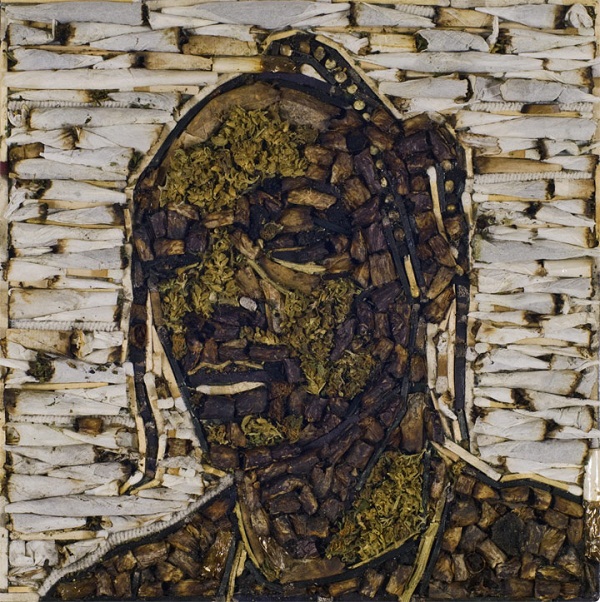 You have to hand it to Snoop Dogg. Despite very stiff competition (or should we say spliff competition?), he has managed to become the go-to celebrity reference point for smoking marijuana.  This certainly did not escape the notice of Jason Mecier. In 2011, he took authentic cannabis, edibles, pills, and partially burned roaches, and made the only portrait on this list that it’s potentially a federal crime in the United States to own. Perhaps it should be called a pot-trait. Mecier estimated that he spent about $1,500 in drug paraphernalia to create it.

Since then, Jason Mecier has become one of the leading figures in the field of portrait art through novelty mediums. He’s been dubbed the “Macaroni Monet” for caricatures that range from a work of Miley Cyrus made of candy to one of David Bowie made of feathers and cosmetics. But this list is meant to share the work of multiple artists, so the last we’ll have to say about Mecier is that if you’d like to see more of his work, check out his book Pop Trash.

Hearing that a portrait was done in crayon gives the impression that the most appropriate place to display it is on the fridge of the artist’s parents. However Granville, Ohio artist Christian Faur’s approach was truly one of a kind. Inspired by the sight of his child opening a box of 120 crayons, he took hundreds of wax crayons and lined them up inside boxes with a glass side so that the tips would effectively act as pixels as on a television or computer screen.

His one-of-a-kind approach to pointillism actually ended up achieving a level of national fame, including being featured in art shows at such places as the Indianapolis Art Center, and featured in publications that included Wired magazine. Some of his projects, like his Forgotten Children series, require tens of thousands of crayons or, in some cases, crayon tips. Sometimes he’s able to achieve a near-photorealistic look with his images. Occasionally he adds a little flair of intentionally putting strips of the wrong color crayons in there, as if he’s trying to represent static or some other form of signal degradation. It’s little deliberate flaws like that which turn Faur’s work from just a technical process into something with a more personal flair.

As far as tributes to an author go, cutting the pages of a book so that the edges of the pages serve as the contours of an author’s face feels like one of the more elegant. In 2006, Nicholas Galanin, an Alaskan artist who worked in mediums that varied from sidewalk chalk to jewelry, took his copy of the thousand page book Under Mount Saint Elias and sliced a 3D face out of it.

In 2012 the Dutch publishers Markus Ravenhorst and Maarten Reynen repeated the idea when they had artist Fedde Souverein design a series of biographies and autobiographies with pages shaped like the faces of their authors. The series included Anne Frank and Vincent van Gogh. While these portraits are much more polished, the fact the text in the Dutch books was shrunk to fit better in the margins for easier reading makes them feel much less authentic than Galanin’s sculpture. 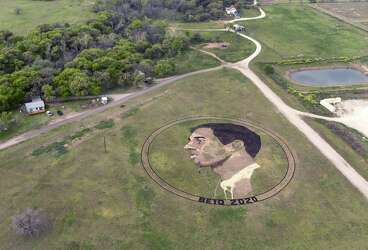 In 2018, Texas US House representative Beto O’Rourke created a lot of excitement and a lot of disappointment when he came within two points of beating Ted Cruz in the race for the US Senate. When he announced a run for president in 2019, much of his voter base’s enthusiasm was still high. One artist who wanted to make his support for the candidate known was Kansas artist Stan Herd. He serendipitously unveiled his two acre soil portrait outside Austin, Texas of O’Rourke just in time for O’Rourke to announce his presidential candidacy.

Herd’s portrait is composed of soil and grass from Kansas along with larger rocks and gravel. It took him two weeks to complete. It also was hardly unprecedented for him. He’d done a similar work for the Minneapolis Art Institute where he recreated Vincent van Gogh’s Olive Trees. In 2008 he also made a soil portrait of Barack Obama during the 2008 primary election, though on a much smaller scale that time. 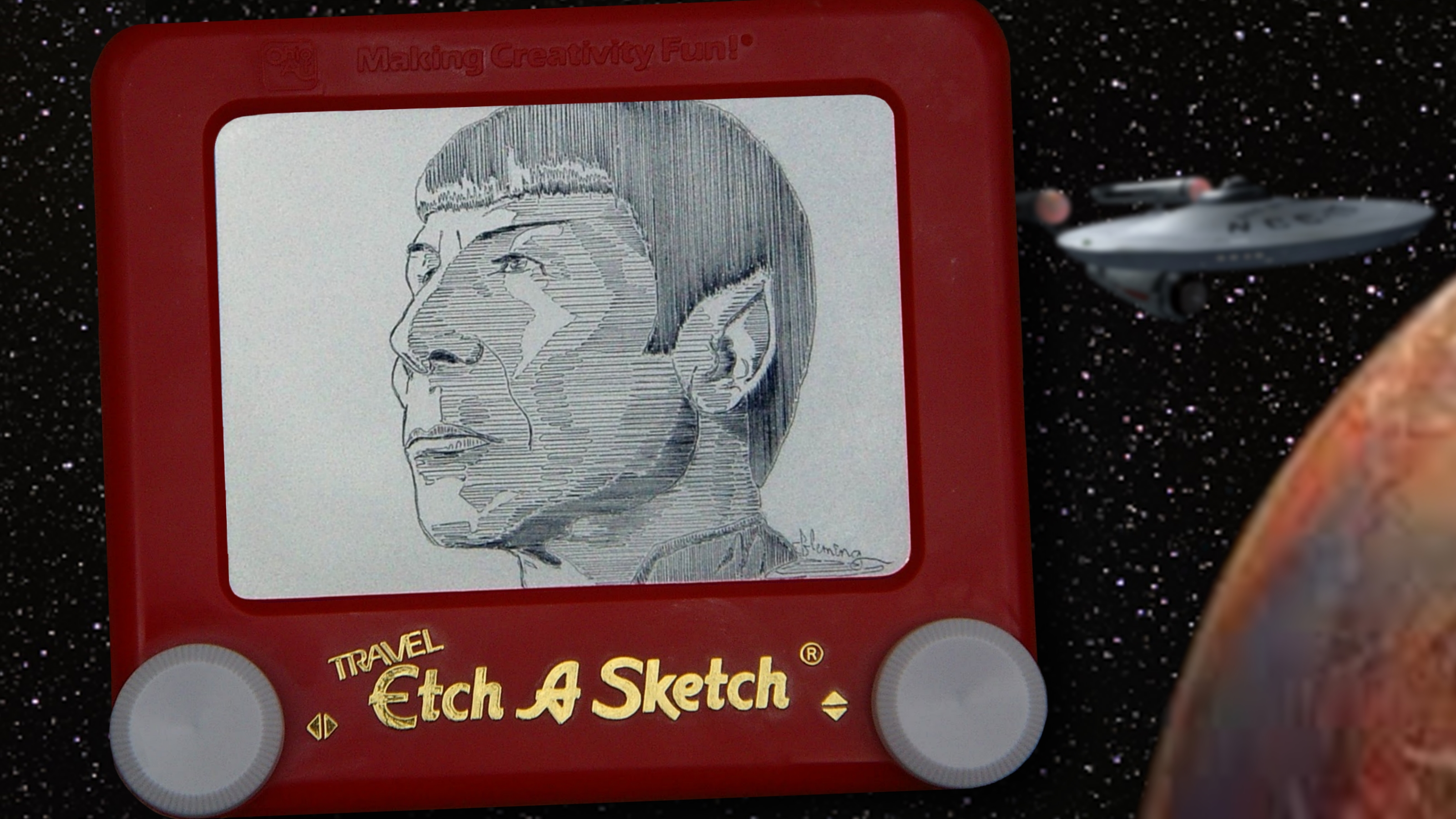 There are few widely-used ways to create an image less user-friendly that the Etch-a-Sketch. There are the very simple but delicate knobs for moving along the X and Y axis that render even making a simple curve somewhat difficult. And then there is the inability to fix mistakes with any precision (without starting over), the need to conceive the drawing so that all lines are connected, and so on. It’s a wonder that Kyle Fleming can render images that are comprehensible at all, let alone create uncanny portraits. But then, he’s had 13 years of practice.

Fleming’s subjects haven’t been limited to cartoon characters like Super Mario or Philip J. Fry from Futurama. He’s also tackled Rodney Dangerfield, Jack Nicholson, Che Guevara, Leonard Nimoy, and will be unveiling his Albert Einstein at toy fairs from London to Tokyo in 2020 to celebrate the 60th anniversary of Etch-a-Sketch. But don’t worry, thinking that a severe earthquake will be enough to erase his entire oeuvre: Fleming removes the sand inside and locks the dials every time he finishes a new etching, leaving them permanent. So if you decide to request one of the portraits he generously offers through his Instagram account, your portrait can be among illustrious company for years and years. 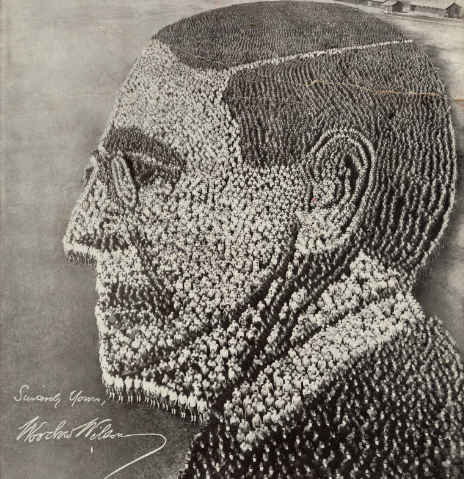 During World War I, the American public needed to be sold on supporting the Allies in a war in Europe that even many Allied soldiers no longer thought was worth it. Some truly inspired propaganda was needed. Arthur Mole and John D. Thomas took tens of thousands of soldiers at places such as Camp Sherman in Chillicothe, Ohio and created tableaus of a type that simply wouldn’t be made today in this age of CGI.

The soldiers lined up in formations to resemble symbols of classic Americana, including the Statue of Liberty, the Liberty Bell, and an American flag. The most detailed image was a portrait of President Woodrow Wilson. The groups of service members could stretch for as long as half a mile, naturally meaning that the vast majority of the soldiers had to stand far away to maintain the desired proportions for the 2D objects, a technique also known as “forced perspective.” For example there are about 15 soldiers in the row nearest the camera in the Statue of Liberty photograph, but there are roughly 12,000 standing in for the statue’s torch and looking significantly smaller than the nearer 15. The photographs were so successful that Mole and Thomas spent six years making them, about 30 of which survive today. 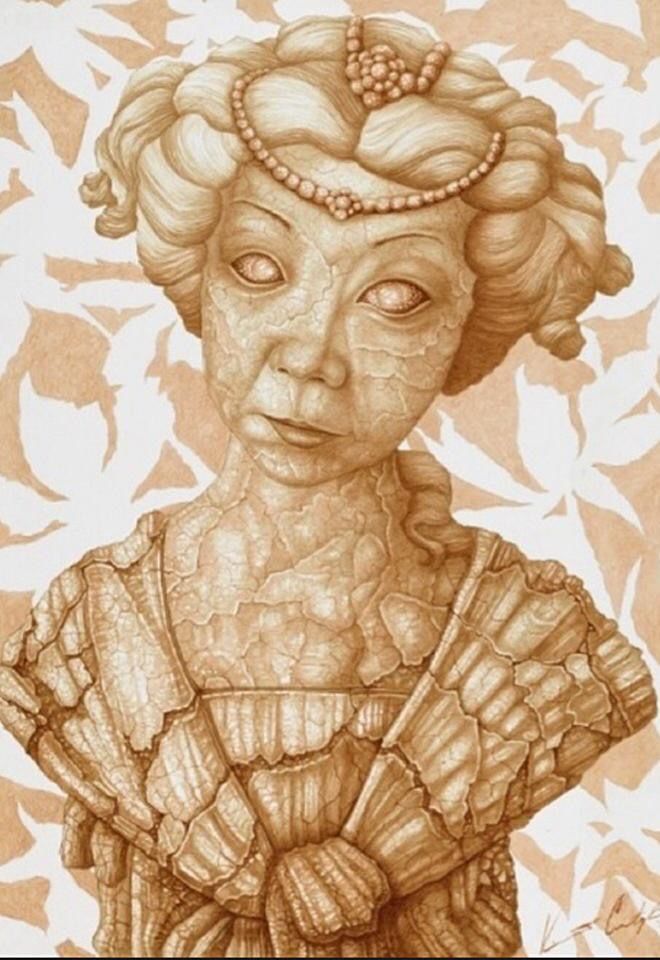 Comedian Margaret Cho and rocker Gregg Allman don’t seem like they’d have much in common, but they are, in one sense, linked by blood. By that we mean that they both hired Vincent Castiglia to take some of their blood and paint their portraits. In Cho’s case, her 3-by-2 foot painting was the first time that Castiglia used blood other than his own. In Allman’s case, the portrait wasn’t completed until after his death and his children contributed some of their blood to the project as well. Copies of the portrait were included with his posthumous album Southern Blood.

Castiglia began painting in the medium of blood around 2000. Since then he’s developed a habit of having around 15 vials of his blood in his studio, which he claims is less than most people would presume. In 2008, during preparation for an exhibition of his work at HG Giger’s museum, he almost collapsed one of his lungs from extracting too much. That’s just one of the many memorable incidents recounted in the 2018 documentary about him, Bloodlines. 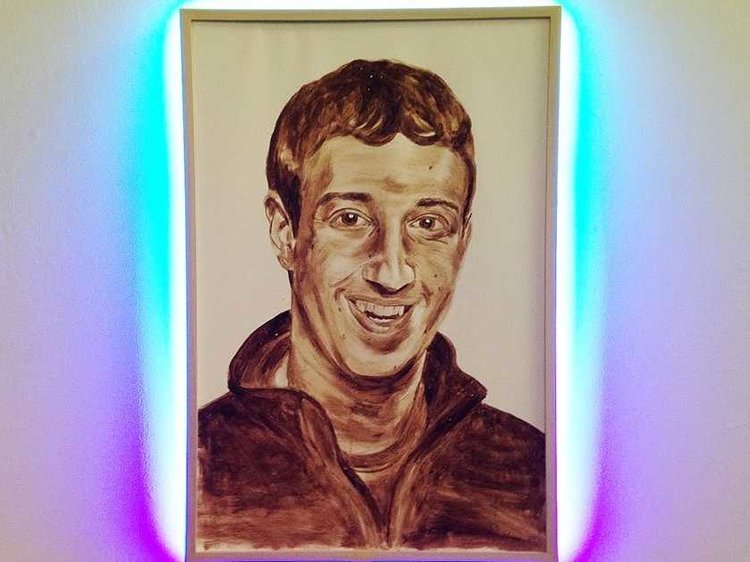 In January 2015, Facebook CEO Mark Zuckerberg’s likeness was captured by artist Katsu in the medium of his own feces on a canvas. Katsu had previously done a series of images where he photoshopped a black eye on Zuckerberg, inspired to do so by the film The Social Network. To create the material for the work, Katsu ate a lot of Thai food. He wore a breathing mask and changed his latex gloves numerous times while working. He also made no effort to preserve the painting, leaving the image to crumble and flake off. If someone bought it (and Katsu claimed at least one anonymous potential client reached out to him) then it would be money that literally went to waste.

It turns out, Katsu  In May 2015, he released another fecal portrait, this time of Google CEO Eric Schmidt. Both paintings were presented with an LED light canvas, so at least they were a little classy.

Dustin Koski is also the author of A Tale of Magic Gone Wrong, a story about fairies turning into monsters.