New species are still being discovered all the time. Maybe it’s because of that so many people are, if not outright convinced, at least open-minded to unusual beasts being real. Things that you might even consider monsters. But often when we discover a monster, it is a very real life explanation that’s a bit less terrifying. Back in 2009, a viral video captured the minds of the internet and chilled everyone to the bone. The video depicts what can best be described as a writhing nightmare latched onto the wall of a sewer. Many people discounted it right away as a hoax, or some kind of viral marketing for a horror movie. The truth of the matter was, it was neither of these things.

The terrifying, pulsing mass was a genuine phenomenon that brought to mind the movie Aliens, and maybe The Thing. Rather than any otherworldly explanation, it turned out to be a colony of what they call tubifex worms.

Tubifex worms live in sewage and at the bottom of ponds. They writhe and pulse in front of the camera, potentially because the light they are being subjected to is both bright and hot. They’re also pretty rare, so you’re not likely to find them just by lifting a sewer hole and dunking your head inside.

On their own, the worms look like any other worm. But in colonies they form enormous masses. When enough of them get together, it looks like a squishy, vibrating internal organ that’s had the skin removed from it. Unpleasant to say the least, but not a super monster.

El Chupacabra is one of the most widely known cryptids in the world. Like Bigfoot and the Loch Ness Monster, it has captured the imaginations of many and continues to fascinate people who are determined to prove it’s real.

In English, chupacabra means the goatsucker, and the creature is reported to suck the blood from goats to sustain itself. So it’s kind of like a mysterious vampire. Many people have claimed to see the creature over the years, and at least one Puerto Rican politician assembled a posse to hunt it down.

In 2014, a couple in Texas claimed to have actually captured the chupacabra, or at least a baby one. They found the creature in a tree on their property and captured it before putting it in the cage.

While it’s true that these people did capture something, at least one game warden proclaimed after the fact that it was less a mythical bloodsucker and more likely a raccoon with a serious case of mange. There have been tales of a mysterious creature living in or around Loch Ness in Scotland that date all the way back to the 6th century. But modern stories, including the idea that it was a dinosaur-like creature, can mostly be traced back to 1933. Since that time, literally hundreds of people have claimed to have seen the beast, and a few hoaxes have been exposed as well.

Not every sighting of the Loch Ness Monster is fakery, of course, but that doesn’t mean they’re all genuine either. In the year 2020 a new image of the Loch Ness monster emerged that spread quickly through social media with many high-profile accounts commenting on it or sharing it around.

Unlike many photos of purported cryptids, this one wasn’t blurry or hard to make out. It’s a very clear photo of the lake with a very clear creature swimming along in the water. Those who are a little more skeptical of monster reports took a closer look at the picture and noticed that the coloration on the creature’s back made it a dead ringer for a wels catfish.

Able to grow to as much as 300 pounds and eight feet in length, it wouldn’t be hard to mistake one of these for a monster at first glance. So the case was closed. Except there was actually another layer to it.

The marks on a catfish’s back are unique, like fingerprints. Some more internet sleuths took the time to compare the Loch Ness catfish and determine that it had actually been PhotoShopped into the picture, and came from a different photo of a large catfish that had been caught two years earlier. So in actuality this Loch Ness monster was a fake photo of a fake monster. Is any cryptid more famous than Bigfoot? It’s possible more people have claimed to have sighted Loch Ness, but there are certainly more movies about Bigfoot. And, just like Loch Ness, there have been some semi-serious attempts to track the creature down.

The FBI actually investigated Bigfoot back in 1977. Maybe The X-Files wasn’t so hard to believe after all. In the year 2019 they made public a cache of documents that included those related to their Bigfoot investigations.

As part of their short-lived research into the creature, the bureau investigated some hair samples sent to them by someone who was in charge of the Bigfoot Information Center and Exhibition in Oregon.

Perhaps out of morbid curiosity, the bureau agreed to run some tests on the hairs to determine the legitimacy of them as being from Bigfoot. And, as it happened, the hair was not so much of a Sasquatch but a deer. 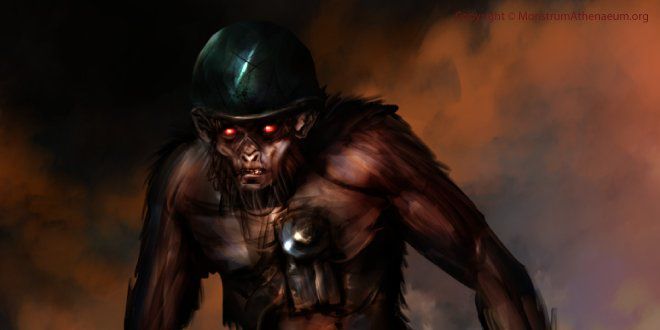 Creatures like Bigfoot and the Loch Ness monster have some history. One person claims they see it, and another claims so, and another and so on over many years. But not every monster needs to build up a reputation over time. Take, for instance, the 2001 reports of a monkey man terrorizing New Delhi, India.

People described the monkey man as being monkey-like with metallic claws. Some people said it was more like a cat. The police suspected it was just pranksters. Whatever it was, it caused panic in the city that led to three deaths and dozens of people who were injured by the mysterious beast.

Gangs of vigilantes were roaming the streets with weapons, trying to find the monster. They brought 3,000 extra police officers into the city to track it down. There was a 50,000 rupee reward for information leading to its capture and almost 350 people reported sightings.

Bafflingly, the monkey man turned out to be neither a monkey nor man. It wasn’t anything at all. They chalked the case up to mass hysteria in which fear built on fear and people just didn’t want to feel left out. All the deaths and injuries were the result of the panicking and violent mobs searching for a creature that didn’t exist. It’s hard to put your finger on exactly where vampires came from in history. Many ancient cultures, as far back as Mesopotamians and Romans, had creatures in their folklore that were very similar in practice to vampires if not in name. The idea of a monster that lives sustain itself on the blood of the living is pretty widespread. For what it’s worth, the word vampire in English seems to date back to 1734.

While there has been many explanations put forth for historic belief in vampires, ranging from people being buried alive to grave robbers to the gums of the deceased are receding from the teeth making it look like your teeth are more pronounced, there are some other, more scientific explanations as well.

There are several blood disorders which can afflict people that could have been considered vampiric and make sure to ancient people. A condition called erythropoietic protoporphyria can develop in childhood and cause you to have an extreme sensitivity to light. Sunlight can cause you to burn and blister.

People with this condition are chronically anemic and are therefore extremely pale. Even on cloudy days, the ultraviolet radiation from the sun would make them uncomfortable. So, these pale people would likely only come out at night.

Even though Loch Ness gets all the press, many places around the world also claim to have local sea serpents. Canada famously has the Ogopogo, and in 2019 China briefly made the news for the discovery of a long serpent in the Yangtze River.

Viral footage of a 65 foot long sea serpent spread through social media in China and sparked a monster hunt. As people speculated about what it might be, workers took to the water and tracked it down. In an anti-climactic twist, the serpent turned out to be a torn up piece of rubber. Are humans alone in the universe? That’s a question that maybe we’ll have an answer to one day. Right now, however, the jury is still out. There are those who not only believe that there are life forms on other worlds, but that they have visited our world in the past. And while there are no end of conspiracy websites that seek to explain this, one of the biggest pieces of so-called evidence for alien life was a curious skeleton that was found in Chile in the year 2003.

The skeleton was only six inches in length but resembles a human. The reason people didn’t think it was you and was the head. Rather than the typical rounded skull most of us are used to, the skeleton features an elongated, cone shaped skull.

The body was wrapped in cloth and tied with ribbon when a man scavenging for trinkets found it. He quickly got the attention of ufologists, who believed it proved that visitors from beyond had come to Earth at some point in the past.

Science had another answer, however. DNA was extracted from bone fragments and analyzed. The result was not alien, but human. A little girl, in fact. She likely had a severe genetic mutation that resulted in her appearance. It’s not known if she ever drew breath or was stillborn, but she was no alien. George Romero didn’t invent zombies, but he sure made them popular. They’ve been a pop culture staple for decades now and, like the monsters themselves, our fascination with them just refuses to die. And, as it happens, there may be more to them than a slow gait and a fictitious desire for human flesh.

In real life, a person affected by Cotard Syndrome believes they are dead but still walking around. The neurologist who first came up with the diagnosis, Jules Cotard, describes it as a depression, anxious melancholia and delusions. Those who suffer from it believe they are dead and therefore have no motivation to do much of anything with their life. There’s no need to eat, work, socialize or anything. They truly believe they have already died.

Obviously, this is a kind of delusion, potentially caused by brain injury or other condition. However, very little research has been done into the syndrome to get to the root of exactly why the people suffering from it feel this way.

We’ve already seen what happens when a bunch of tubifex worms get into the sewer. But a man in the Caribbean discovered what, for all intents and purposes, appeared to be the Venom symbiote. A glassy, black mass of writing goop that can be pulled apart and seems to pull itself back together again. Some people guess that it was tubifex worms at work again, but that was not the case. Luckily it was not an alien symbiote ready to eat the heads off of people either.

Tubifex worms were the wrong guess but not too far off the mark. The Marvel Comics-like mass in this particular video was actually something called a bootlace worm. Bootlace worms are extremely thin, think vermicelli noodle size. But they’re also very long. When they get together in clusters, they make writhing, twisting weird bundles.

The longest bootlace worm on record was 180 feet in length, which is terrifying in a whole different way. They also produce a very toxic mucus. So, even though this isn’t technically a monster, it’s still the kind of thing you want to stay away from.