There are 570 recognized native tribes currently living in the United States, with more in Canada and Mexico. The first people to populate North America likely did so around 17,000 years ago. That’s a long time to develop not just a history but a mythology about the world around you and how it works. The various native tribes that once existed and still exist throughout North America had a rich history of storytelling which included some incredible creatures. Here’s a look at 10 of the most terrifying.

Arguably one of the most popular creatures from First Nations folklore, the Wendigo can be found in stories throughout the tribes in Eastern Canada Such as the Chippewa, Ojibwe, Mi’kmaq, and other Algonquian-speaking peoples.

Traditionally a resident of the frigid North where food was scarce and settlements could be very remote, the Wendigo was an evil supernatural being that would eat the flesh of man. It was such a culturally significant idea that it is actually lent its name to a psychological condition called wendigo psychosis. Wendigo psychosis is defined by the kind of madness that causes a person to crave human flesh and fear becoming a cannibal. Pop culture has really embraced this idea and there are a few movies such as “Ravenous” which make use of this idea that social isolation and a kind of cabin fever can drive humans to this extreme.

In the actual mythology though, the Wendigo is not a man but a malevolent spirit or a forest monster of some kind, often depicted as having antlers like a stag. 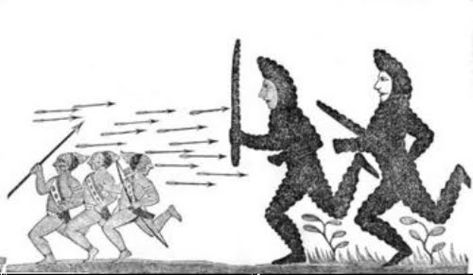 Stone Coats are known by several names in Native American folklore, including Stone Giants, but the general description is always the same. They’re shaped like men but much taller and their name, Stone Coats, comes from the fact that they are covered in a thick leathery scale hide that can repel weapons and protect them from attacks. In some stories there are a whole race of these beings and they war with the native tribes, while others refer to it as a singular beast. They’re also said to emit an absolutely foul odor from their armpits.

According to stories, when the Stone Coats attack they will carry off their victims to eat them at a later date. Sometimes they’ll even prepare the bodies by twisting their heads off first. The legends of the Stone Coats are told by different peoples and in some of the stories they were even human once but turned into these flesh-eating monsters in much the same way that a Wendigo works. 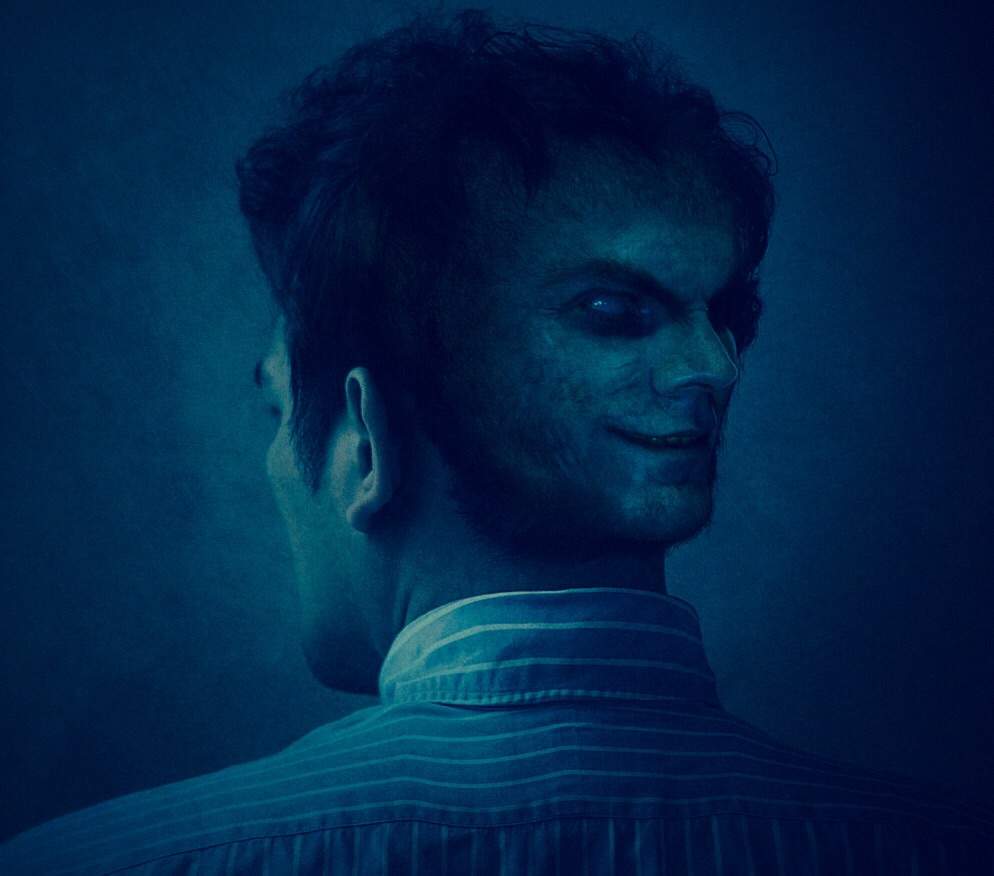 Not to be mistaken with the Batman villain of the same name, the Two-Faces of native folklore are also known as Double-Faces and Sharp-Elbows. The name of these creatures isn’t metaphorical, they literally have one face like a normal human would but also a second face on the back of their head.

Originating in the folklore of the Cheyenne, the Omaha, and the Sioux, Two-Faces are sometimes likened to ogres in the way Stone Coats were, and sometimes they’re considered to look exactly like humans until you see the back of their head and that evil second face. Making eye contact with the second face spells certain doom and it will either kill you on the spot or return to kill you at a later date. Also, like the Stone Coats, there are some tribes that believe there was a single Two-Face, usually a woman, while other tribes believe these were an entire race of beings. They were considered to be the cause of childhood nightmares by some peoples and others felt that they had many Wendigo-like characteristics such as being cannibalistic. Regardless of the differences in the legends, there was never a good Two-Face out there.

For the Choctaw and the Chickasaw, the great horned snake known as Sint Holo was not a monster in the traditional sense of the word. It wasn’t a beast that would carry off villagers to eat them usually, though it was believed to be willing and able to drag victims to a watery death if they had crossed the serpent in some way. Instead, it was closer to a god or a spirit guide willing to help those who had earned its consideration.

Sint Holo was said to live in a cave under the water and be invisible to people unless it wanted to show itself. When it did the show itself it was only to those who had demonstrated some kind of wisdom and had essentially earned the right to see the Great Snake. It could bestow wisdom on to those that it met because it had deemed them worthy. For instance, Sequoya, the creator of the Cherokee language, was thought to have met Sint Holo in order to have learned the alphabet for the Cherokee.

From his underwater cave it was believed Sint Holo could create rain and storms, including a fearsome sound like thunder.  The sound was not thunder, however, because Sint Holo was actually an enemy of the Thunder Spirits who were the real source of thunder. The Thunderers and the horned serpents like Sint Holo were at war, and the snake could be killed by Thunderbolts. 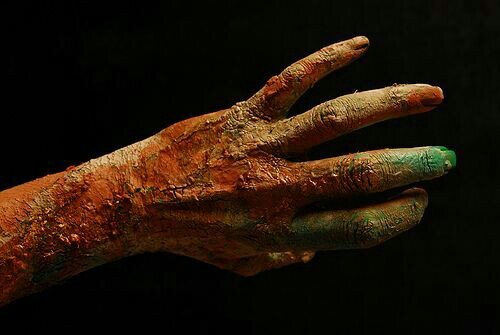 Oniate, which means Dry Fingers or Dry Hands, is kind of like a zombie and can be traced to Iroquois folklore. Where it differs from the modern idea of a zombie is that Dry Hands gets its name because it was just a dry hand. It is the severed hand, sometimes with a bit of arm still attached, of an Iroquois Warrior. Just for kicks, it’s also capable of flying.

This disembodied, undead hand will punish those who are deemed deserving of it. What makes you deserving of the wrath of a severed zombie hand? Things like speaking ill of the dead or just meddling in other people’s business could get Dry Fingers coming after you. In other stories there was really no motivation for it and it was one of those things that just happened to an unlucky person who was in the wrong place at the wrong time.

Being just a hand, Dry Fingers isn’t capable of putting up much of a fight, but it doesn’t need to. If it’s undead touch lands on you, you will be struck with a deadly disease that will kill you in short order.

Depending on which stories you were listening to, the basket woman is either a very significant figure in Native lore, or little more than a sinister boogeyman. In the more spiritual sense, the basket woman is the Moon, mother of the Stars. She lured the first man and the first woman to her home where her daughters taught them many stories, games, songs, and dances, until they learned all the things that man needed to know from the Stars. Afterward the basket woman put her children back in a basket and returned to the sky with them. It’s quite a nice little story.

In other stories told by the Wasco people, the basket woman is an ogress who carries a basket into which she will toss children so she can carry them off and eat them. Lucky for her hapless would-be victims she’s also not the brightest monster in the forest and was easily tricked by the children who got away from her in the end. Also known as the great head or big head, these monsters are just what their name makes them sound like. They’re mostly human-looking heads that are capable of flying and have a giant mouth full of razor-sharp teeth. They’re said to have an insatiable hunger and naturally their main food source is delicious humans.

Sometimes the heads have bat wings, sometimes they have the wings of birds. They’re also larger than a full-grown human. One legend states that before the Europeans came to North America, it was the flying heads who drove the native inhabitants away from their hunting grounds in New York. They dive from the skies and lock their teeth into a victim, and they could devour whole villages. 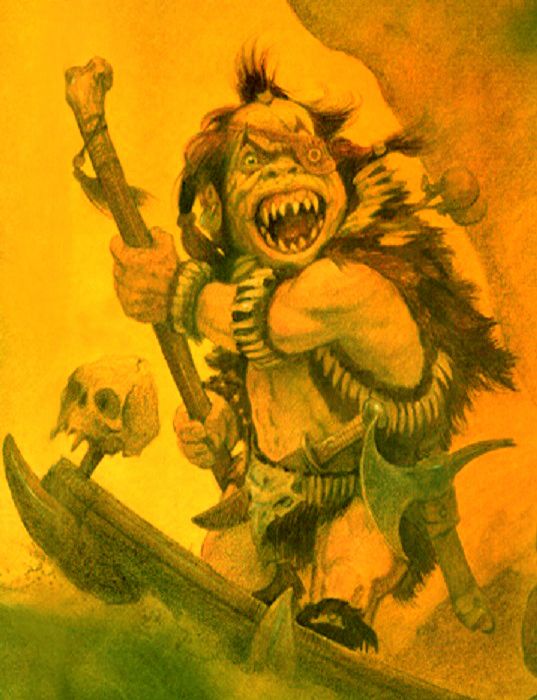 If there’s one thing that’s clear about the lore of many Native American tribes is that they really had a thing for cannibals. The Teihiihan were a race of cannibal dwarves that roamed the plains devouring humankind. They were the size of children, but they traveled in large groups and were stronger than humans. They were savage and brutal because they believed the only way they could get to the afterlife was by dying in battle, kind of like Klingons or Vikings.

While it was clear that these little monsters were a scourge, it’s also said that the entire race was wiped out during a war with the Arapaho and some tribes that they had allied with to fight the Teihiihan. 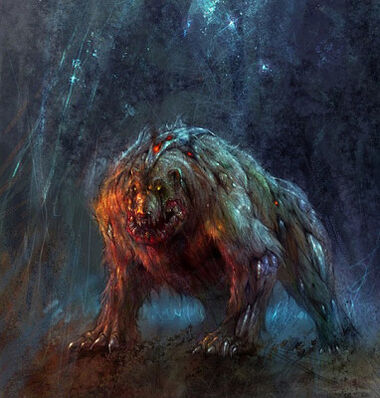 One of the more interesting creatures from native lore is the stiff-legged bear, which is maybe a bear or maybe even a woolly mammoth. How do you get those two things confused? You tell a story enough times over enough years, then some of the details get lost in translation. According to various stories it is a bear that’s the size of an elephant, but there is some precedent for the belief that it was actually a mastodon or a woolly mammoth originally because one of the native words used to describe it was the same word that was used when Natives first saw African elephants. 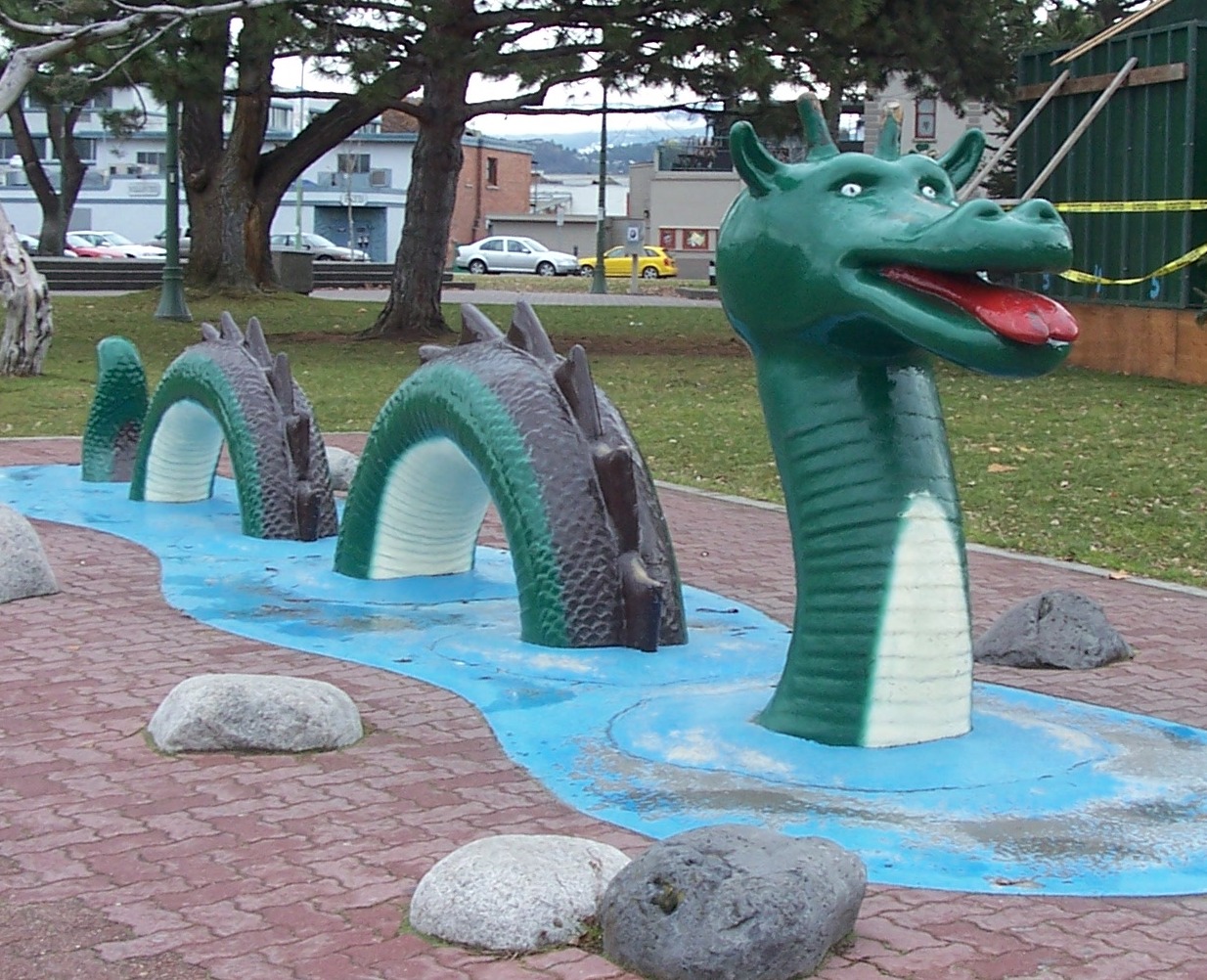 Some of the most enduring myths that you’ll find anywhere in the world relate to lake monsters. These creatures exist on pretty much every continent in mythology and folklore, the most famous of which is the Loch Ness Monster from Scotland. Canada has its own fairly well-known lake monster called the Ogopogo.

Said to inhabit Lake Okanagan in British Columbia, the Ogopogo is described as a 40 to 50-foot-long serpent-like creature. The name Ogopogo dates back to the early 1900s and is part of the sanitization of the entire myth, which turned it into something of a tourism grab. In modern times the Ogopogo is actually considered a friendly lake creature and you can go to Lake Okanagan and buy stuffed animals and hats and t-shirts bearing a cartoon likeness of the creature.

The native mythology on which Ogopogo is based is a little more dark. For them the creature was called Naitaka, and it was regarded more as a water god or a water demon. If you wanted to cross the lake, you needed to make a sacrifice to Naitaka lest it kill you as well.

In one tale there was a man possessed by a demon who murdered another man named Old Kan-He-Kan. The lake was named in honour of him, Okanogan, while the murderer was punished by the gods to spend forever at the site of his crime. They transformed him into a monster that devours those who cross his path.