The Maori people of New Zealand came from eastern Polynesia in waves of canoes sometime between 1250 and 1300 AD. Over the centuries, they developed a rich and complex society that included a fierce and terrifying warrior culture. Europeans described the Maori warriors as large men, although women could be warriors as well, who had extensive facial tattoos. While they looked fearsome, their intense physical appearance is only the start of what made these warriors so terrifying.

10. Their Tattoos Were Carved In

Tattoos held a special significance to the Maori people and both men and women would get them. The most common place to get them was the face, but some Maori people were known to get their necks, torsos, and arms tattooed as well. Most Maoris started getting their tattoos during adolescence.

Each design was unique, but generally they were in the shape spirals. They were tattooed on during a ceremony, and each line showed the person’s bravery and strength. After all, these tattoos weren’t put on using a needle gun. Instead, they were carved into the skin using a mallet and a chisel that was made from a bone and the ink was made from ash and fat. This left the skin with grooves like a record, instead of being smooth like modern tattoos.

One of the most notable traditions used by the Maori warriors, and still used by many of their national sports teams today, is the traditional native dance called the Haka. During the dance, the participants say a chant, stamp their feet, stick out their tongues, and bulge out their eyes. While the dance was often performed to welcome special guests, it was actually developed for war.

The dance was used in two different ways. The first is that it was used to intimidate their opponents. The other way it was used was that it was performed before a battle during a ritual. If there was something wrong with the dance, then the elders were sure that it was a bad omen. This gave them the chance to either abandon or modify their plans.

8. The Mere Club Was Used to Crack Skulls The mere club was the most common weapon used by Maori warriors. It was in the shape of a teardrop, and made from bone, jade, or stone. They were often decorated and considered heirlooms since it took so long to craft one.

They are a blunt force weapon and were used in close range fighting. Often, a Maori warrior would attack an opposing tribesman by swinging the mere club down on his shoulder. This would hopefully break the collar bone, or dislocate or break their shoulder. Then their opponent would be unable to defend himself against a blow to the head; often to the temple. Behind the temple is the Pterion, which is the weakest point of the skull. Since the skull is so thin there, it usually only took one blow to that area to kill an opposing warrior.

7. The Dead Were Buried and Dug Back up Again and Then Reburied The Maori had a very unusual method for burying their dead. Starting early in their culture, the Maori people began to bury people twice. First, after a week or two of mourning, the body was wrapped in mats and then would be buried and allowed to decompose. Then, a year later, the bodies were dug up and the bones were scraped to remove any remaining flesh.

The bones were then painted with red ochre, which is a natural pigment, and taken to different settlements, where they once again mourned the dead. Then there was another ceremony before they were buried again in a sacred place. Once this second burial was complete, the person’s soul would go on to their mysterious afterlife. 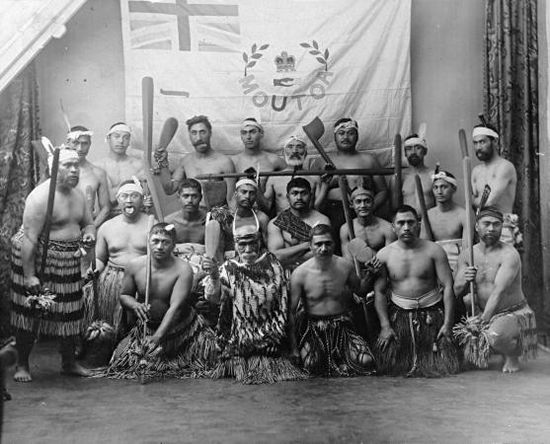 A war party, called a hapu, usually never consisted of more than 100 men, and in some cases women fought as well. Sometimes multiple hapus would join together, but with more warriors, they became less organized.

Warriors were also trained from a young age, and every male was trained as a warrior. One specific thing they worked on was wrist strength. This would make their weapons, like the mere, much more effective.

How the Maoris would attack other tribes is by travelling to enemy settlements quietly, or pretend they were just on a hunting expedition. Once they got close, they would attack, often at dawn. All the men were killed because this eliminated the chance that any tribesman could come back and seek revenge. The women were also taken as a prize of war.

5. Heads of the Killed Were Taken as Trophies 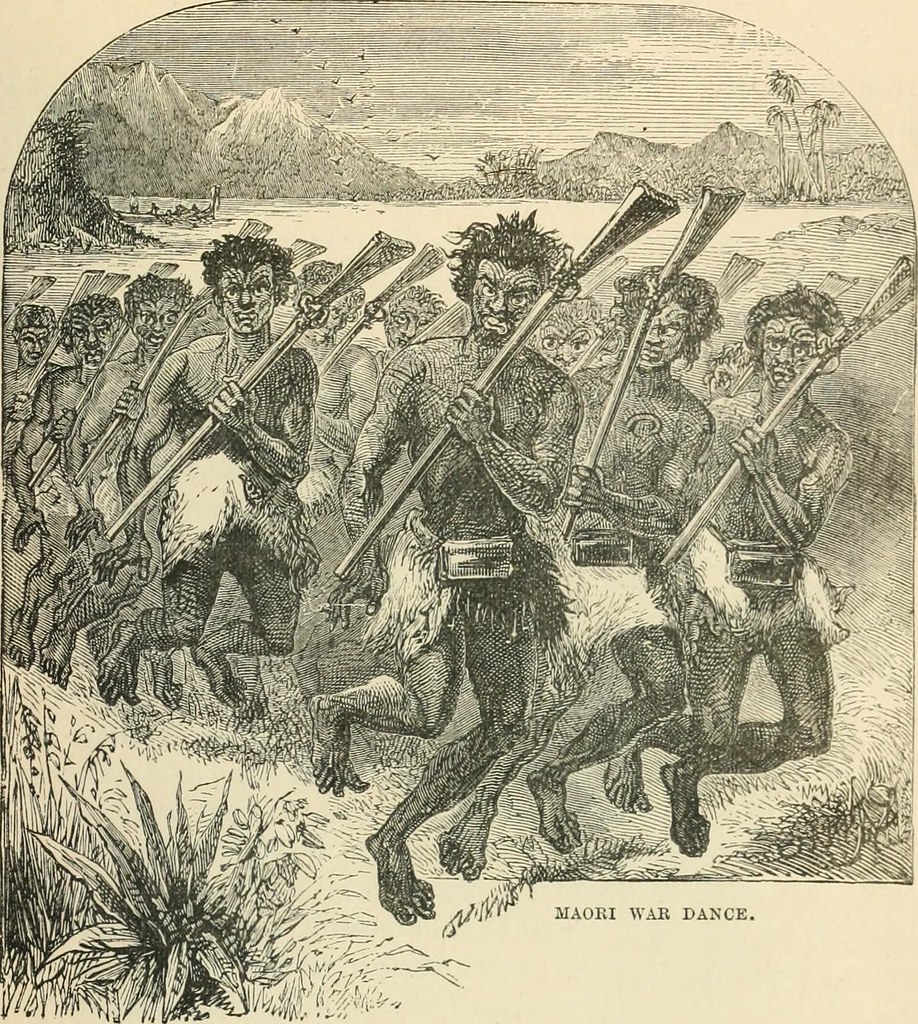 Heads held a special significance to the Maori people, and they were known to take the heads of their fallen enemies. Once they had the head, they would remove the brain and the eyes. Next, all the orifices were sealed with flax fiber and gum. The head was boiled or steamed in an oven. Then, the heads were dried in the sun for several days and then treated with shark oil.

One reason why they kept the heads of their enemies was so they could mock it later. One missionary said he watched one chief say to the head of an enemy chieftain:

You wanted to run away didn’t you? But my greenstone club overtook you! And after you were cooked you were made food for me!

And where is your father? He is cooked.

And where is your brother? He is eaten.

And where is your wife? There she sits; a wife for me.

And where are your children? There they are, loads on their backs carrying food as my slaves.

If that wasn’t insulting enough, they also developed a bizarre game with the heads. They would pile them in a heap, and then they set the head of the principal chief on the top of the pile. Then, using stones or other heads, they took turns trying to knock off the head at the top of the pile.

The first encounter between Europeans and the Maori was in December 1646, when a Dutch ship made landfall near a Maori tribe. Both groups were standoffish and this led to a small fight that resulted in deaths on both sides. After the run in, the Dutch sailed off and Europeans would not go back until October 1767, when English navigator James Cook traveled there looking for the fabled fourth continent.

When Captain Cook first encountered the Maori, they sent out two war canoes to meet them. When the canoes approached, two fully grown Maori warriors, complete with face tattoos, stood up and held up the shrunken heads of their latest opponents, who were also covered with tattoos. Cook and his crew immediately noticed the detail on the faces and knew the heads were real.

Cook wanted to interact with the Maori’s peacefully, but there were some misunderstandings and the Maori acted aggressively. As a result, the Europeans were supposedly forced to kill a few Maori in self-defense; much to the dismay of Cook.

To convince them they had come in peace, Cook and his men ended up kidnapping some Maori warriors. They acted kindly to them, and then let them go. This led to a better relationship between the Maori and the Europeans, which would play an important role in the shaping of New Zealand.

3. Their Most Famous Warrior Hongi Hika 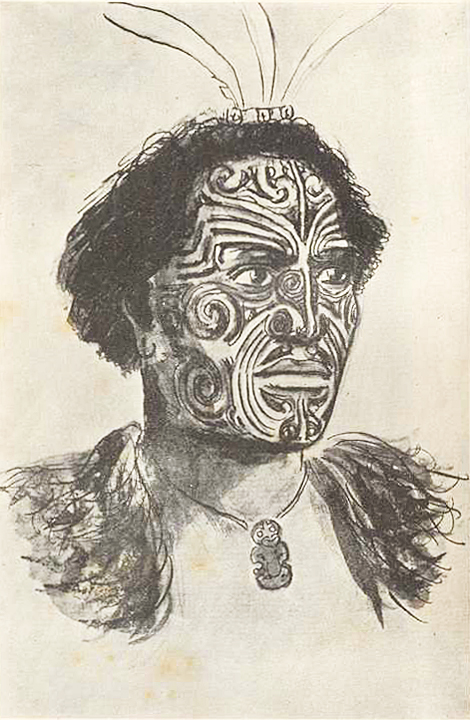 It’s believed that the most famous Maori chief, Hongi Hika, was born in 1778. As a young man, he was a fierce and agile warrior who rose up through the ranks of his tribe, the Ngapuhi iwi. His chief got along with the Europeans and also saw the value of muskets in warfare. The chief managed to trade with the Europeans for several guns and ammo and in 1808, the tribe got into a war with another tribe, called the Ngati Whatua.

The Ngapuhi iwi fired off their first shots with the muskets, but the problem with muskets of the time is that it took at least 20 seconds to reload. The Ngati Whatua used this reloading time to attack. Many members of the Ngapuhi iwi tribe, including the chief, were slaughtered. Hongi Hika was one of the lucky few to get away.

With the chief dead, Hongi Hika was the most senior, so he took control of the tribe. The defeat could have very well discouraged Hongi Hika from using muskets. However, he had the foresight to see that muskets could be an incredibly important part of warfare. So he got closer to the Europeans, even visiting Australia and England, where he became a bit of a sensation because of his tattoos. He even converted to Christianity and set up the first Christian mission in New Zealand.

This relationship to the church gave Hongi Hika access to more rifles because he vowed to become a defender of the church. However, he wasn’t simply given all the guns, instead trading for them. As for what the Europeans wanted in exchange for the guns, well… that was shrunken heads. In fact, as the trade became more common, slaves and prisoners of war were brought to the Europeans and they chose which heads they wanted. The Maori then tattooed the chosen victim, and decapitated them. The market got to be so flooded with Maori heads that they were being sold for as little as £2, which was about a week’s wage in England for a working man.

Nevertheless, Hongi Hika was able to amass over 3,000 guns, and plenty of ammo and gunpowder in his 10-years as chief. Starting in 1818, his tribe slaughtered other tribes and took their women. Within a year, he had complete control over Northern New Zealand. However, other tribes soon followed in Hongi Hika’s footsteps and bought their own guns. Hongi Hika was killed when he took a bullet to the lung in 1828.

Like other warrior cultures, the Maoris committed infanticide. Females were more likely to be killed because tribes needed more males, since every male was a warrior and there needed to be a decent amount of warriors to ensure the security of the tribe. Also, males were more likely to be killed in battle, meaning that there would have been an upset in the sex ratios later on in life. Infanticide was also common if there was anything wrong with the baby.

Essentially, there were five ways that the infants were killed. Their skulls could be crushed, they could be drowned in a stone basin, strangulation, suffocation, and finally, the most disturbing way was that mothers would press against the soft spot on the skull and kill the baby instantly. Well, that’s cheery. Hey, can’t say we didn’t warn you. “Terrifying” is right there in the title.

Whether the Maori warriors committed cannibalism or not is highly debated. Some historians believe that it was just Europeans trying to paint the Maoris as wild savages. However, besides witness accounts of cannibalism, tribal oral histories and archaeological evidence also strongly suggest that the Maori warriors indulged in cannibalizing vanquished enemies.

There are a few reasons that the Maori ate their opponents, and it wasn’t because they were hungry. One was to internalize their spirit, which they called mana. Another theory is that the cannibalism was part of their post battle rage. Another is that it would send a message to enemies. They thought that the greatest humiliation you could do to your enemy was to kill them, chop them up, eat them, and then excrete them out.