People buy some pretty pointless stuff. For example, someone paid James Franco $10,000 for a piece of “Non-Visible” art. But how much is a few lines of code really worth? Would you be willing to fork over thousands, maybe even millions of dollars for an in-game purchase? You may not feel like spending more money than most people make in a lifetime on a virtual item, yet some people have. These are the most expensive in-game purchases ever made. We should also note that all the prices are listed in U.S. dollars.

Dibalo III is one of the fastest selling PC games of all-time. Across all platforms, it’s sold over 30 million copies since it was released in 2012. It’s a hack and slash game, so powerful weapons can be valuable, but weapons rarely go for more than a few hundred dollars at Diablo III auction houses.

That doesn’t mean some outrageous purchases have never been made in the game. The biggest sale in the game happened in November 2012. The item in question was a powerful Echoing Fury mace and it eventually sold for $12,000.

Some of you who played Diablo III may be realizing that you have an Echoing Fury mace and you can sell it for big bucks, but we’ve got bad news for you. This Echoing Fury had near-perfect stats and new, more powerful weapons are released every season, so Echoing Fury maces aren’t worth much, if anything, today.

Eve Online is a space simulator and massively multiplayer online role-playing game that was released in May 2003. It’s an expansive game and there are many different activities that users can do like mini, trade, manufacture, and even combat.

In the game, you can buy or build spaceships and at times, this can be kind of expensive. In November 2015, one of the most powerful alliances in the games, Hard Knocks Inc. (who say the “n” is silent in their name, because of course they do) bought the blueprints to construct a Keepstar citadel, which is essentially a Death Star. The citadel took three months to build and is 956,792 square yards. It is big enough that other large ships called Titans can dock in it.

Hard Knocks will have to keep up security on their Death Star, because there is a bounty of $75,000 being offered to any faction that can force them out of their home system, which is called Rage.

Citadels was very powerful, but they aren’t indestructible. In a month long war in 2016, another faction lost a citadel, which cost $10,000 to construct.

Like several other games on this list, Age of Wulin is free to play, and it has some huge in-game purchases. It’s a massively multiplayer online role-playing game that is based on Wuxia-inspired lore.

Before the game was released in 2012, the developers of the game, Snail, held an auction for in-game items. At the auction, something called the Hook of Departure sheath sold for $1,600, and then another item, called the Lordly Spear sheath, sold for $2,500. The biggest sale was a sword that went for $16,000. This was all before the game was released, so hopefully the purchaser liked the game after he downloaded.

Counter-Strike: Global Offensive, also known by its acronym, CS:GO, is a multiplayer first-person shooter. The game is incredibly popular with full leagues and thousands of YouTube and Twitch channels dedicated to it.

Since it’s a first-person shooter, weapons, which are called skins in the game, are very important. In the game, weapons start off as factory new and the more they are used, the more they depreciate in value. So the most valuable weapons are rare factory new ones, which makes the factory new StatTrak M9 Bayonet Crimson Web knife one of the most expensive in-game items ever sold. In 2014, a person who wished to be anonymous paid $23,850 for it. We’re sure it was totally worth it.

In Counter-Strike: Global Offensive, the color and design of the skins are what help add value to the weapons. For some reason, possibly because it looks cool, weapons that are crimson red with a black spider-web design are very valuable.

According to a YouTube channel dedicated to CS:GO, McSkillet, the most expensive skin ever sold was a factory new Karambit Crimson Web knife, which sold for $30,000. Or, if you prefer, about the same price as a brand new 2018 Volkswagen Golf.

Defense of the Ancients 2, better known as DOTA 2, is a free-to-play multiplayer online battle arena game that was released in 2013. It’s one of the most popular games on the Steam gaming network and there are major tournaments and leagues that revolve around the game.

If you aren’t familiar with it, the concept of the game is pretty simple. There are two teams consisting of five characters and they have to destroy the opposing teams’ base, called the Ancient, before their own base is destroyed.

In the game, there are 113 characters that have their own special abilities and fighting styles. There are also add-ons for the characters, like couriers, which transfer items back and forth between your team and your Ancient. They are a helpful part of the game and having a good one is a tremendous benefit. That could explain why someone bought an ethereal flame pink war dog for $38,000 in 2013. At the time, there were only four others in the game.

One of the reasons that it was so valuable was its color. But in a sad turn of events, just days after the purchase, a new update to the game allowed people to change the color of their dogs, which dramatically decreased the value of the dog to less than $4,000. Did anyone else just hear a sad trombone sound? 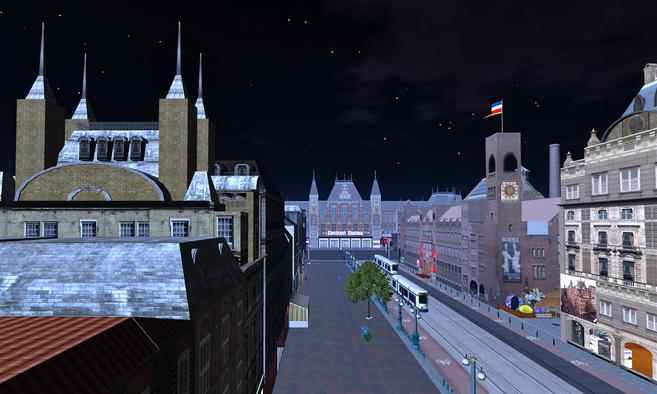 Second Life debuted in 2003, and the creators claim that it is not a game because there is no conflict or objective. Instead, basically it’s just (like the title suggests) a second life… only online. Users, who are called Residents, traverse the video game and do things people do in real life, like ski or see a live concert.

In total, as of 2017, there are over 23,000 regions in the game, making up 595 square miles, so it is about the size of Rwanada and El Salvador. One of the most popular regions of the game is Amsterdam, where Residents can visit popular tourist attractions like the Rijksmuseum and the Van Gogh Museum. No, just kidding, it’s full of sex shops and avatars solicit Residents to pay for cybersex.

In 2007, Amsterdam went up for sale on e-Bay and sold for $50,000, which is a deal if you consider the price of real estate in the real Amsterdam.

Entropia Universe is a massively multiplayer online virtual universe that was released in 2003. The game has its own economy called Project Entropia Dollars (PED) and every American dollar is worth $10 PED. This allows people to buy items and even property in the game; kind of like the Oasis in Ready Player One. People even make a decent living owning areas of the game because users will pay to visit them and perform tasks.

What makes Entropia so unique is that if someone chooses to leave the game or wants to withdraw their PED, they can convert it back to American currency and withdraw it.

Since the sale, the owners have developed a theme for the moon and it’s a continuation of HP Lovecraft’s Cthulhu Mythos, making Mornia arguably the nerdiest moon in any universe.

Yep, we’re going right back to Entropia. Another huge purchase in the game was the Crystal Palace Space Station. The Crystal Palace debuted in 2004 and it’s one of two space stations that orbits around the game’s first planet, Calypyso. In 2009, it went up for auction and was purchased by a Canadian user named Erik Novak, aka ‘Buzz Erik Lightyear’, who spent $330,000 on it.

At the time, it was the most expensive in-game purchase ever. However, because of the game’s economy the Space Station actually generates revenue since people pay to hunt and mine in the space dome. According to an online directory, the Space Station is a great place for experienced hunters looking for a challenge.

You didn’t think we were done with a game that regularly gets people to fork over six figures, did you? Club Neverdie is located on an Asteroid that orbits around Planet Calypso. The asteroid was purchased in 2005 by one of the game’s biggest celebrities, Neverdie, aka American Jon Jacobs. He spent a $100,000 to buy it, and Jacobs, who has his own theme song, had to take out a real mortgage on his house.

On the asteroid, Jacobs built bio-domes, a night club, a stadium, and a mall. At its peak, Club Neverdie was generating $200,000 a year and Jacobs didn’t have any employees, so all he had to do was check in every so often.