In his novel The Colour of Magic, fantasy author Terry Prachett says, “You can’t map a sense of humor.” Perhaps not, but a cartographer can certainly have his tongue firmly in cheek while drawing a map. Not all of the maps in the list below are intended to be humorous or whimsical. Some of them were taken quite seriously in the cartographer’s own time. Some of them have historical significance. Some of them are simply popular on social media. All of them are weird. This 1265 world map is believed to be a copy of the one that graced the Westminster Palace bedchamber of the Plantagenet king, Henry III. In 13th century Europe, it wasn’t uncommon for Jerusalem to be portrayed as the center of the world, since it is a sacred city in the Christian tradition. On this map, Jesus Christ holds the world in his hands. He is flanked by two angels.

Rome, the headquarters of the Catholic Church, appears slightly to the right of Jerusalem. The Ganges River, the Danube River, and the Red Sea are all drawn in blue. The British Isles are on the left. An Old English travel guide colloquially known as “The Marvels of the East” is on the right. The reverse side of the Psalter map shows God holding a globe divided into three parts: the continents of Europe, Asia, and Africa. Housed in the British Library, the Psalter map reveals that the medieval Europeans’ conception of the world gave primacy to the Christian faith.

9. The Cartography of Dante’s Inferno The Italian  poet, Dante Aligheri’s (c. 1265-c. 1321) 1314 work, The Inferno, is arguably the most well known work in a trilogy that also includes Paradise and Purgatory, completed between 1314 and 1317. In The Inferno, hell is divided into nine concentric circles. Each circle is devoted to a particular sin, and the sinners suffer particularized punishments. Many artists and intellectuals created maps depicting Dante’s version of hell.

The first map of Dante’s hell was created by Antonio Manetti, a 15th century Italian map maker and mathematician. Manetti provided precise measurements. For example, he said that Limbo, the place where the Catholic Church claimed the souls of unbaptized babies resided (at least until the church renounced Limbo in 2007) was 87 and a half miles in diameter. Mapping Dante’s hell was a serious intellectual pursuit. The 15th century Italian artist and inventor Leonardo da Vinci, publicly confirmed Manetti’s measurements. In 2009, four graduate researchers in geography at Kansas State University sought to create a compelling conference presentation for an annual meeting of the Association of American Geographers. The researchers presented a map in which they attempted to quantify how often Nevada’s population indulged in the Seven Deadly Sins by using federal data. (According to the Catholic Church, the Seven Deadly Sins — lust, gluttony, greed, sloth, wrath, envy and pride — were among the most serious sins in which one could indulge.)

The researchers’ mapping project was so popular that they expanded their data collection to include all of the United States. While intriguing, the data the map presents is not definitive. The researchers’ criteria for interpreting the data were terribly subjective. A population’s level of greediness, for example, was determined by comparing the median income in a particular area with the percentage of people living at or below the poverty line in the same area. The researchers do not account for how socioeconomic, sociopolitical, and sociocultural forces might influence the data.

7. The Red Hair Map of Europe 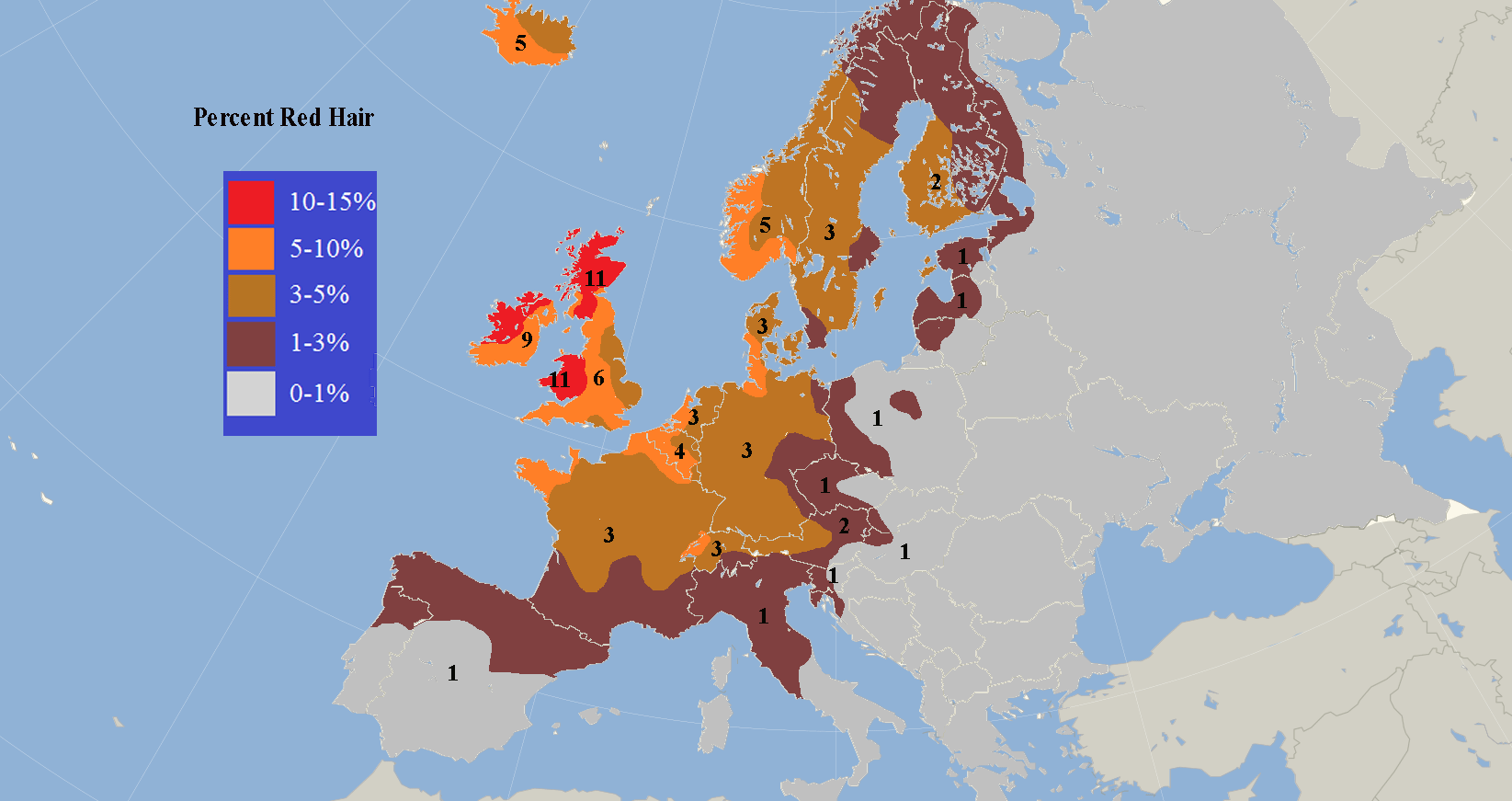 Even if the Red Hair Map of Europe isn’t scholarly, it is basically accurate, insofar as the map accurately labels the countries with the highest percentages of redheads. The best anthropological theory to support that data is that red hair originated in the Asian steppes. Nomadic tribes migrated from the Middle East to the Asian steppes roughly 100,000 years ago, when herding became a primary mode of survival. Anthropologists speculate that the recessive genes for red hair developed as a response to the lower levels of ultraviolet light in the Asian steppes. A redhead’s pale skin and light hair is ideal for absorbing ultraviolet light, which the body needs to produce Vitamin D. (The ability to effectively absorb ultraviolet light sometimes makes redheads prone to sunburns.) The nomads migrated to Russia and intermarried (or at least hooked up) with members of the Celtic tribes in what are now Ireland and the United Kingdom, which is why the Red Hair Map of Europe shows such a high concentration of redheads in the Balkans and Western Europe. It’s the ideal map for someone who is looking for a place to celebrate Kiss A Ginger Day.

6. The Map of English History

In his 2012 book All The Countries We’ve Ever Invaded: And The Few We Never Got Round To, author Stuart Laycock catalogues every country that has been under British rule. According to Laycock, Britain has invaded roughly 90% of the world, all but 22 countries.

The London Telegraph ran an article about the book the year it was published. Reporter Jasper Copping accompanied the article with a map showing all of the countries that have been invaded by the British. Laycock, who was quoted in the article, said, “The book is not intended as any kind of moral judgement on our history or our empire. It is meant as a light-hearted bit of fun.” 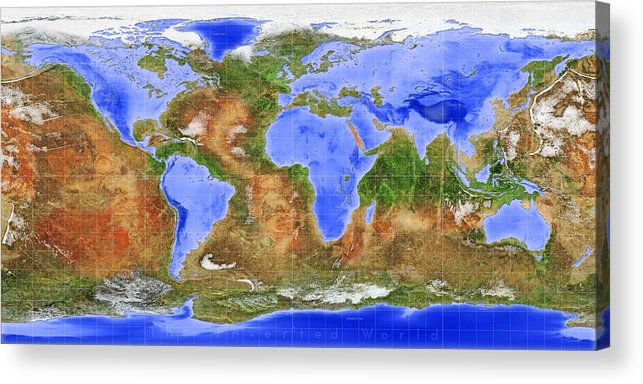 As Frans Blok pointed out in 2015, he wasn’t the first to create a world map wherein land masses and bodies of water were inverted. Vladislov Gerasimov and Chris Wayan’s efforts predated his own. Martin Waldeseemüller was a well regarded German cartographer of the 16th century. In 1507, he made 1,000 copies of his woodcut world map. Only five gores (wood cuttings designed to be pasted onto globes) and one wall map survive. The wall map measures four feet by eight feet, and it is divided into 12 panels. This map is the first that shows and names the new continents and the ocean discovered by European explorers.

Waldeseemüeller’s work is historically relevant, not weird. This map qualifies for this list not because of what it depicts, but because of how much it costs. In 2003, the United States Library of Congress paid ten million dollars for the only surviving wall map. The United States has a particular attachment to Waldeseemüeller’s map: It’s the first map on which the name “America” appears. Waldeseemüller named North America and South America for the Italian explorer Amerigo Vespucci. 16th century German geographer and astronomer Peter Apian’s (also known as Petrus Apianus) cordiform world map is one of only 18 world maps of its kind. All cordiform maps were created between 1511 and 1566. The word “cordiform” comes from two Latin words: “cor” (meaning heart) and “form” (meaning shape).

On Apian’s map, and all maps of its type, the world is heart shaped. Until the 17th century, scientists and scholars believed Galen’s second century argument in On The Usefulness Of Parts Of The Body that the heart was the organ that resided closest to the soul. This scientific claim inspired the medieval belief that one’s emotional state affected the physical world. After all, the soul affected an organ in the human body. Cordiform maps illustrated this medieval  belief.

2. The Fool’s Cap Map Of The World Based on how the world is drawn, historians estimate that a European cartographer created this map between 1580 and 1590. The map depicts a jester, someone whose court position is to serve as an entertainer for a monarch. The jester’s position is identifiable because of his baubled cap, but his face has been replaced by a globe. If the symbolism behind this map is unclear, it’s partially because the identity of the cartographer is unknown.

The subject of the cartographer’s ridicule is also uncertain. Some scholars believe it may have been the French mathematician and cartographer Orance Finé. He died between 30 and 40 years before the map is believed to have been created. During his life, however, Finé was arrested for practicing judiciary astrology. Judiciary astrologers would use information gleaned from the stars to advise paying customers about important decisions, including medical procedures. Some scholars believe the map’s cartographer was Epicthonius Cosmopolites, because the map includes this cartouche: “Democritus laughed at it, Heraclitus wept over it and Epicthonius Cosmopolites portrayed it.”

Unlike the cartographer of The Fool’s Cap Map Of The World, the creator of The French Invasion; or John Bull Bombarding the Bum-Boats is very well known. British cartoonist James Gillray produced between 1,000 and 1,700 cartoons. This 1793 political cartoon captures the British citizens’ unease over the bloody French Revolution. Well aware of the sociopolitical and sociocultural damage a civil war could do, Britons (who endured their own civil war, the English Civil War, from  1642 to 1651) sought to contain the civil unrest in France.

Here, King George III literally embodies England. He is also the embodiment of John Bull, an imaginary figure symbolizing England, first used by the cartoonist John Arbuthnot in 1667. George III is farting gunboats onto the coast of France, showing both his bold commitment to protecting England and his contempt for the French. The British Declaration depicted in the cartoon is a reference to King George III’s promise to cede British ports in Toulon to the French upon the restoration of the French monarchy. This is one of the few cartoons wherein Gillray portrays King George III favorably. Perhaps fortunately for Gillray, the king said, “I don’t understand these caricatures,” after he saw some of Gillray’s work.