What started as a parody of literally every trope in ’80s comic books has become a juggernaut of a franchise, with no signs of stopping, even 36 years after their 1984 debut. The Teenage Mutant Ninja Turtles have been adapted into cartoons, movies, comics (so many comics), board games, video games, and probably every kind of merchandise you can possibly think of.

Here are 10 amazing facts about the Teenage Mutant Ninja Turtles.

The success of the Teenage Mutant Ninja Turtles (or TMNT) is practically a rags to riches story. Turtles co-creators Kevin Eastman and Peter Laird both contributed to art and story. The original Turtles comic was never intended to go beyond a single issue, and this is evident by the fact that the main villain, the Shredder, dies at the end of the issue (spoilers!).

The duo printed off a small, 3,000 copy run of the comic using money from a $500 tax refund and a loan from Eastman’s uncle. After printing, they had just enough money to run an ad in Comics Buyer’s Guide Magazine, and to Eastman and Laird’s surprise, they sold out within several weeks. That wasn’t the end, either, as more orders came in, they were compelled to produce another 6,000 copies of the book.

The two realized that they might have been on to something big, so they got to work on a second issue, introducing many elements that would come to define the Turtles universe. As soon as they had issue 2 finished, Mirage Studios had orders for 15,000 copies, issue 3 would sell a massive 50,000 copies, and sales would continue to skyrocket, until issue 8 sold 135,000 copies, rivaling some of the best selling comics in 1985 (like Uncanny X-Men).

9. The Turtles Came from a Simple Sketch

It might (or might not) surprise you that the Ninja Turtles were created in 1983 as a joke. Eastman and Laird were struggling illustrators, sharing a studio apartment about the size of a living room.

One night, Eastman drew a turtle standing upright with nunchaku strapped to its arms and a bandanna wrapped around its head. Eastman wrote “Ninja Turtle” above his sketch and handed it off to his partner, hoping that it would make him laugh.

Laird was so amused by the drawing that he started his own, more refined drawing. This kicked off a competition between the two artists, eventually resulting in the character designs that appear in the first issue.

The next day, they both looked at the drawings they’d created and decided that they just had to write a story to go with their designs.

Mirage Studios got its name because of the fact that (at the time of the first issue’s publication) it wasn’t a real company and Eastman and Laird’s studio consisted of their tiny studio apartment. Peter Laird described the space as only having kitchen tables and couches with lap boards.

After the success of the first issue, Mirage would become a real company (adding further irony to the name) and would move to Sharon, Connecticut, where it would stay for two years before moving again to Northampton (a place that appears often in Turtles cartoons, comics, and the first movie).

The company would also foster the careers of many underground cartoonists when the senior staff (Kevin and Peter) stopped being able to work on actual comics due to the complications of running the media empire surrounding the Teenage Mutant Ninja Turtles.

7. The Turtles Exist Within the Daredevil Universe 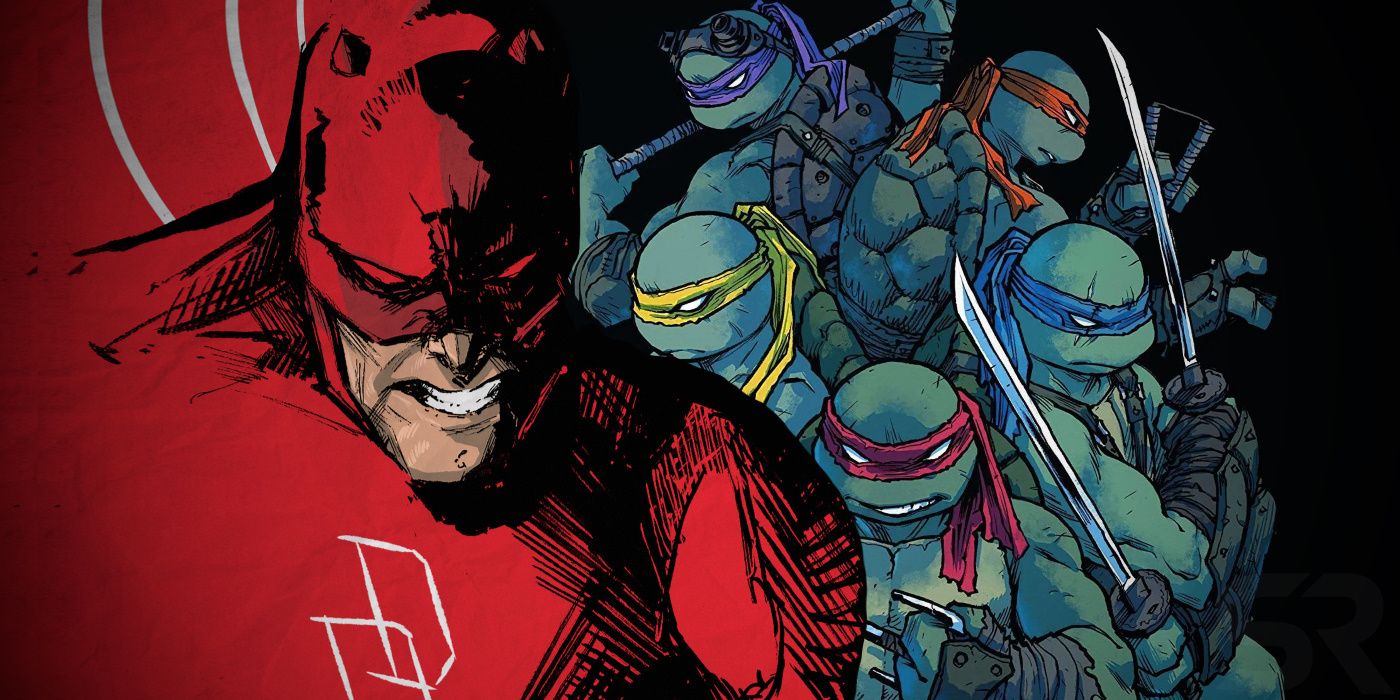 The origin of the TMNT parodied at least four tropes popular in 1980s comics. Ninjas (like Daredevil and the enemy that he fights, “the Hand”), mutants and teenagers (popular in comics like X-Men and Spider-Man), and of course anthropomorphic characters (like Dave Sim’s Cerberus the Aardvark).

A young man (who is supposed to be a young Matt Murdock, aka Daredevil) rushes forward and pushes the old man out of the way. The truck swerves, crashing and causing a canister filled with radioactive ooze to strike a glass terrarium held by a little boy on the side of the street, freeing four baby turtles in the process.

The Turtles end up in the sewers covered in ooze, where their future mentor Splinter (who was watching the whole thing while doing some dumpster diving) would gather them up in a coffee can, getting the ooze on himself in the process and mutating them all into humanoid creatures.

The parallels to Daredevil do not stop there. As mentioned earlier, one of Daredevil’s main enemies was the mysterious organization of criminal ninjas, “the Hand.” Well, the Turtles had their own criminal organization of ninjas as well, called “the Foot.” Additionally, Daredevil was trained in the city by a man named Stick, and the Turtles were trained below the city by Splinter.

6. The Turtles Craze in Europe Caused an Ecological Disaster Due to the popularity of the Ninja Turtles, kids in the UK in the late ’80s and ’90s not only stripped store shelves of every TMNT toy they could get their hands on but also caused the demand for red-eared terrapin to explode.

Red-eared terrapins are not native to the UK, and as you might imagine, due to the facts that these turtles can grow as large as a whole foot (no pun intended) and turtles are not very easy to care for in the first place, most of those turtles ended up being abandoned in ponds instead of getting new tanks (a fact that is as heartbreaking as it sounds).

This caused what amounts to an ecological disaster. Red-eared terrapins eat a variety of things, including ducklings, small waterbirds, and other amphibians. This can cause damage to the balance of life and waterways where they’re introduced, and that is exactly what happened in Europe.

5. The Word Ninja Was Banned in Europe Turtle fans in the UK were treated to a slightly different version of the cartoon that was making waves throughout the US in the late ’80s and early ’90s. The name of the show was changed from Teenage Mutant Ninja Turtles to Teenage Mutant Hero Turtles.

The reason for this change was due to censorship policies in Europe. Censors in Europe thought that the word ninja was just too violent for a show aimed at children. Thus, every piece of memorabilia, every toy, and every other product to bear the name of the Turtles would feature the word Hero instead of Ninja.

Little did these censors realize, the collective shock that would come to European Turtles fans when the internet came along and revealed the fact that they had been lied to throughout their entire collective childhood.

Oh, and they replaced Michelangelo’s nunchaku with a weird grappling hook that looks like a yo-yo. It was apparently illegal for them to show a pair of nunchakus on screen.

4. The Turtles Used to Have Tails

In the original comics and designs, the Ninja Turtles were based on red-eared sliders (hence why they were so popular with kids in Europe), and they were also designed with tails.

The road to marketing the Turtles to toy companies was difficult, and the property was turned down by every major toy company in the ’80s, but Playmates Toys would finally take a chance on the property, a decision which would skyrocket the company to new levels of success.

During the early design process, playmates created a prototype sculpt of the Turtles. This sculpt featured a tail that looked more than a little phallic.

The design was revised without the tail, and this design choice would be echoed in every Turtles property for the next three decades.

3. Their Arch Villain, the Shredder, was Based on a Cheese Grater

Every great comic book character needs an arch-nemesis, and it might surprise you to find out how the TMNT got theirs.

After a night of drinking, Kevin was drying dishes when he came across a triangular-shaped cheese grater. For some reason, Eastman decided to put the grater on his arm and turn to Laird, saying, “Could you imagine a character with weapons on his arms like this?”

The name Kevin came up with was less than amazing, though, calling his creation “Grate-Man.” Fortunately for all of us ’80s kids, Peter Laird suggested the name “the Shredder” instead.

So, yes: the Shredder, the most feared enemy of the Ninja Turtles, who leads an army of ninjas in New York City that strike fear in the hearts of the criminals they work with, was named after a cheese grater.

2. The TMNT Led to a Wave of Knockoffs

Thanks to the popularity of the TMNT, both toy companies, and production companies behind children’s cartoons looked at the heroes in a half shell as a golden opportunity to create insanely popular toy lines and cartoons themselves.

As many as 20 knockoff cartoons and toy lines have been made, each following the same formula as the Teenage Mutant Ninja Turtles, but without the same levels of success that the Turtles have seen.

A few especially terrible ones include Street Sharks, Biker Mice from Mars, and Wild West C.O.W.-Boys of Moo Mesa (which centers around three teenage cow… boys, who protect their town from all kinds of bad guys).

Of these three, Biker Mice from Mars lasted the longest, followed by Street Sharks (which lasted from 1994 to 1997), and Cowboys of Moo Mesa was the biggest flop of the bunch (only lasting one year). As was mentioned earlier, Playmates Toys was the only company willing to take on the Teenage Mutant Ninja Turtles. Other toy companies thought the concept was too ridiculous to fly with kids or parents.

But you may be surprised to learn that Playmates Toys specialized in making dolls at the time. They had no experience in the boy’s action figure market. Despite this, Playmates would gain massive success after deciding to push forward with the TMNT action figure line despite a less than enthusiastic unveiling at the 1988 New York Toy Fair.

After an initial 3,000 piece order, the Turtles would go on to become one of the most significant success stories in the toy industry and many fans of the line consider it to be the true start of a trend in 90s action figure lines.

By 1990, the toy line was one of the most successful in the industry’s entire history, making $200 million in that year alone and taking up at least 60% of the action figure market.