Make-up and common cosmetics have been around for centuries. In the olden days cosmetics were at times, very dangerous, and could be fatal. Egyptian women would use kohl as a method to line and darken the eyes. Women throughout the 19th century would often use lead oxide and carbonate as a way to create whiter skin. Others used belladonna in their eyes in order to create a sparkle.

While cosmetics are meant to enhance beauty and make one prettier, the ingredients used aren’t always the prettiest. Some of these are very common while others are used far and between. However, it’s safe to say that these ingredients aren’t ones you’d probably think are in your cosmetics bag.

Scientists and cosmetic lines have found out that by using waste cooking oil, a certain type of surfactant is created which is then put into cosmetics. So what’s it do to make you a little bit prettier? Supposedly, the surfactant helps to regenerate damaged skin. Many of these companies will get the waste oil from fast food restaurants and cafés. A little gross but if you can put something to good use, do it!

If you’re a police officer or someone who requires some painful self-defense, you may know what Oleoresin Capsicum is. Better known as “OC spray” or just “pepper spray,” this substance is widely used in sprays by police men, law enforcement, and often hikers who may encounter dangerous animals. It’s definitely known for being painful, and even able to cause temporary blindness when it makes contact with the eye. However, the substance, usually extracted as capsaicin from chilies, is also used in cosmetics. If you’ve ever used a lipstick or lipgloss, or some other cosmetic that has a “tingly” feel to it, you can rest assured that it’s the oleoresin capsicum giving you that feeling. And no, shoving your lipstick in the eye of your ex boyfriend won’t keep him away.

Ever used any type of cosmetic that had a shimmer to it? Maybe lotion, nail polish, or lipstick? If you have, that lovely shimmer you wore more than likely came from the use of fish scales. Pearlescence, as it’s called, is the silver shiny substance found in fish scales that is often used in cosmetics to give them that glow and shimmer. Herring is mainly used to obtain the pearlescence and today it is one of the most supplemented fish by-products in the world.

While you’re not likely to find cochineal dye listed as an ingredient in your cosmetics, you just may find carmine, cochineal, or carminic acid. If you find any of these ingredients listed, you probably are using a cosmetic that has some sort of red hue to it, such as lipstick. Though it seems pretty harmless, this dye used in a lot of cosmetics comes from cochineal beetles. The bugs are drowned in hot water, dried, and then ground to a fine powder. The crimson red dye is then extracted and used in whatever beauty product you can imagine. It’s also used in food products as well, such as gelatins, juices, and even candy.

As surprising as it seems, using semen in cosmetics didn’t just start. It’s been a long-time tradition to use cod sperm in lotions as it provides a quality that binds water. However, most recently, some companies and salons have begun to use nothing other than bull semen. According to a U.K. salon, bull semen provides any type of hair with a brilliant sheen that no other substance can match. The salon, known as Hari’s Salon, uses bull semen mixed with katria root, to neutralize the odor, and viola, shiny hair. If you’re up for some semen in your hair, take a trip to the U.K. with $90 in hand. Maybe the cowboys know something we don’t.

Looking for the fountain of youth? Look no further than foreskin. It probably sounds a little bit gross, and probably a little bit unethical to some, but human foreskin is actually used by numerous cosmetic companies around the world. In the medical field, human foreskin has been used for years as a method to cultivate new skin growth, instead of performing skin graphs on burn patients. It’s been proven to work much more effectively. The same method is also used in the cosmetics world. Companies, the most notable being SkinMedica, use foreskin fibroblasts in cosmetic creams and collagens, especially those made to reduce wrinkles. It is said that one piece of foreskin from a baby boy can be used to create about 4 acres of new skin. Ambergris; sounds like something nice, maybe pretty, however, it’s everything but that. It’s actually a gray or black substance that is found in the digestive system of sperm whales, we’ll just call it bile, or “whale by-product,” both work. Despite its dark color and waxy texture, ambergris is said to have a very earthy and sweet smell to it. The substance was widely used in cosmetics, especially perfumes because of its smell. However, not many companies use it today as synthetic scents have become much more popular. Whoever decided to smell this definitely has some guts! 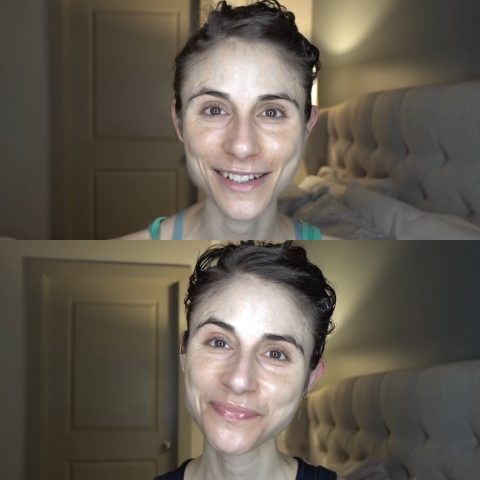 Who knew urine contained something cosmetic companies would flip over? Urea, a chief waste product of our body as well as from animals, is used in antiperspirants, moisturizers, mouthwashes, deodorants, and shampoos. That’s right; you’re getting all beautified with the help of an organic compound in urine! Urea is used because it is known to absorb, attract and retain water, and contains vitamins A, D, E, and K. Not only does it work wonders on sweat and moisturizing, it is also a great anti-inflammatory as well as a sun protection. Thankfully, most companies now use synthetic urea instead of extracting it from a horse.

If you’re Tom Cruise, a mom, or a father brave enough to stay in the delivery room, you probably know what a placenta is, and I doubt it’s something you want to remember knowing about or even seeing. Despite how disgusting they look, some people have actually found a new use for them: cosmetics. The company Plazan has created and manufactured an entire line of cosmetics made with human placenta. Why placenta? Apparently cosmetics that use hormones extracted from the placenta, such as Hyaluronic Acid and Protein Hydrolysate, help to promote tissue growth, which is very effective in removing wrinkles. As if it’s any better, our bodies don’t become reliant upon products with human placenta because it’s made with our biological structure, both those products that use animal placenta are another story.