There aren’t too many urban legends out there as creepy as the Bunny Man. Although it’s labelled as a myth and a legend, there is some truth to the story of the terrifying man dressed in a bunny costume who would terrorize unsuspecting victims with an axe. Starting with the legend, followed by the truths and false “facts” of the story, and how people to this day are still searching for the infamous Bunny Man, everything you need to know about this spooky tale is detailed in this article.

Let’s begin with the original legend of the Bunny Man. The story starts in Fairfax County, Virginia where an insane asylum was built after the Civil War ended. The locals were quite upset because nobody wanted to live next to an asylum full of mentally ill criminals who were labelled as criminally insane, so the institution was forced to shut its doors for good.

All of the patients were finished being transferred out of there by the year 1904. This is, however, where the story takes a very terrifying turn. During the transfer process, several of the mentally ill patients escaped from the vehicle that was carrying them. These lost, dangerous, and delusional patients ended up hiding in the woods. The majority of them were eventually found, except for two men who remained unaccounted for: Douglas Griffon and Marcus Lawster. The police did find a very disturbing clue as to what these two men may have been up to, as they found the bodies of half-eaten rabbits all along a trail.

The authorities followed the trail deep into the woods, where they came upon a tunnel bridge and what they found there was even more disturbing than the half-eaten rabbit carcasses. They found one of the escapees, Marcus Lawster, hanging from the tunnel entrance with a disturbing note attached to one of his feet that read, “You’ll never find me no matter how hard you try! Signed, The Bunny Man.” It’s no surprise that this bridge has since been labelled the “Bunny Man Bridge.” And for those who dare to take the frightening walk through the tunnel, especially around midnight, the Bunny Man (assumed to be the second escapee Douglas Griffen) will grab them and hang them from the entrance of the bridge, just as he did with his escape partner Marcus. There have been reports of strange sightings and frightening deaths associated with the Bunny Man Bridge. One of those stories is that of a young man who was travelling from Clifton, Virginia when he found the infamous bridge. After leaving the bridge, he ended up killing his parents, and dragged their bodies back through the woods and he hung them from the bridge and proceeded to kill himself.

Another tragic event took place in 1943 when three teens (two guys and one girl) decided to hang out at the bridge on Halloween night. They were all found dead with their bodies slashed, hanging from the bridge with a note attached to each of their feet that read, “You’ll never catch the Bunny Man!”

A more recent event took place in 2001 when six students and one guide decided to search the area after hearing about the legend. During their search they came upon body parts of mutilated rabbits. And if that wasn’t frightening enough, they heard strange noises in the woods and saw figures moving around, so needless to say, they quickly left the forest.

Other Versions of the Legend

In most versions, it is said that the Bunny Man was never seen again and never caught. In some versions, however, after a dead body was found that was thought to have been the Bunny Man’s victim, the police searched for him around the train tracks by the bridge and finally found him near the supposed bus crash site that he had escaped from. After a brief chase with the suspect, the police had to stop running after him because they heard the sound of an oncoming train heading towards them. Instead of getting out of the way of the train, Douglas Griffon actually stood in front of it. While he was waiting to get hit by the train, he apparently let out a disturbing, devilish laugh. His body was never found. 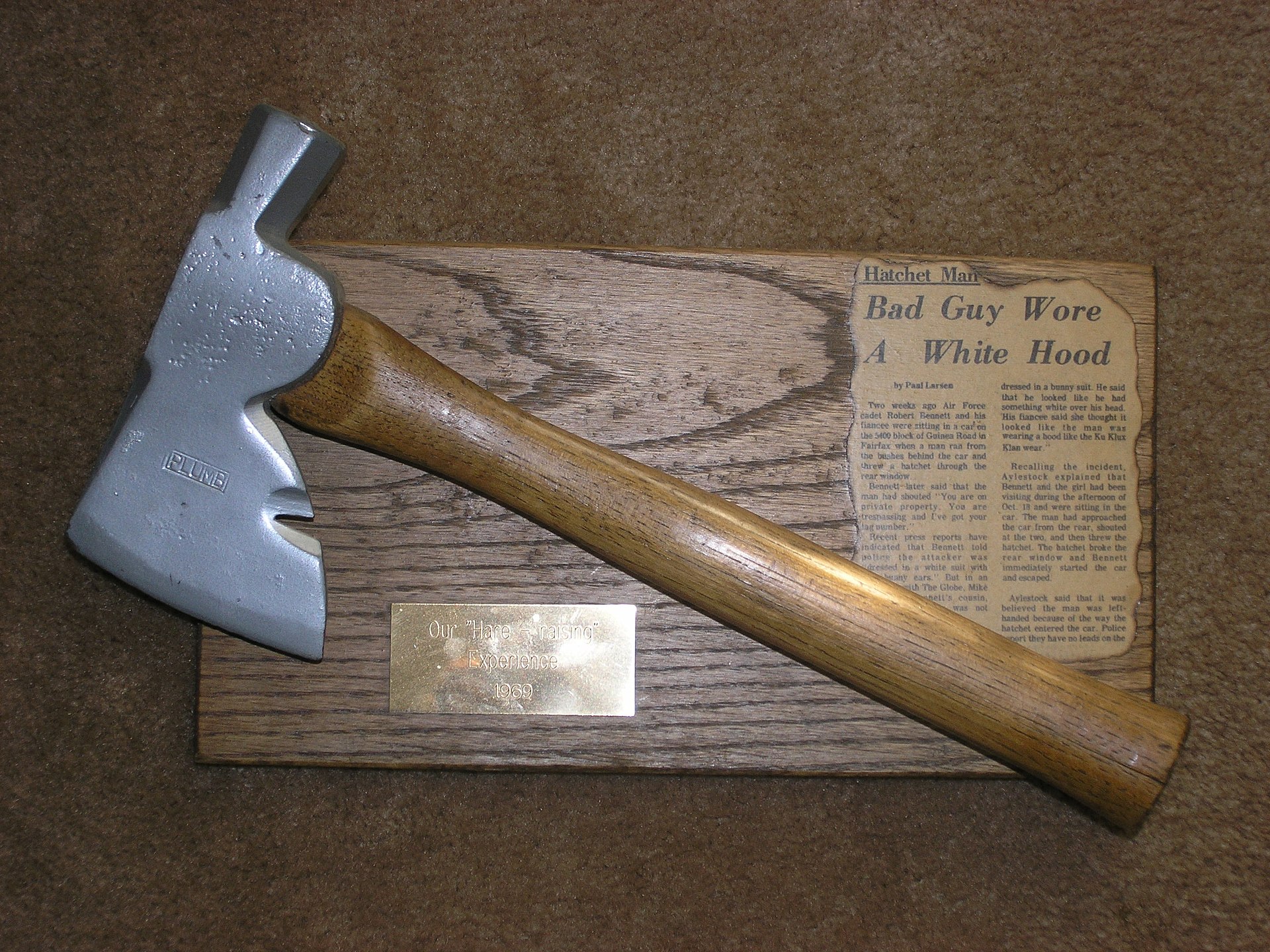 As with a lot of urban legends, they do originate with some sort of facts. In this case, there really was a Bunny Man running around doing crazy things. In 1970, there were two instances where a man dressed in a bunny suit was doing very frightening things.

One night, a young couple was out for an evening drive when they decided to park the car for a bit. That’s when a man dressed in a white bunny suit approached them, complained that they were trespassing, and then threw a hatchet directly at their car. While the axe broke the window of their car, neither one of the occupants in the vehicle was injured. What’s even more unreal is that the couple actually kept the hatchet as a souvenir of their terrifying night. The axe was mounted on a wooden plaque with a metal inscription that reads, “Our Hare-Raising Experience – 1969.”

A couple of weeks later, a private security guard for a construction company witnessed a man in a bunny suit at a newly built house that was still unoccupied, and he was chopping away at a roof support on the front porch with an axe. This is what the security guard said to the Washington Post: “I started talking to him and that’s when he started chopping.” The man in the bunny costume said, “All you people trespass around here. If you don’t get out of here, I’m going to bust you on the head.” When the guard walked back to his car to retrieve his gun, the Bunny Man ran off into the woods and was never apprehended.

The local police received over fifty reports of witnesses claiming to have seen the Bunny Man, but to this day he has never been caught and it’s still a mystery as to who this man dressed in a bunny suit actually was. According to historian-archivist Brian Conley of the Virginia Room in the Fairfax County Library, “There really was some guy doing strange things in a bunny suit.” Conley spent over ten years researching the legend of the Bunny Man.

While there is some truth to the legend, other facts just don’t make a whole lot of sense. For example, although buses were invented prior to 1904, it still wouldn’t have been the normal or most common way to transport patients/inmates from one location to another. In addition to that, the Lorton Prison hadn’t been built yet, and there were no records of there ever being an insane asylum in that area in 1904.

The Legend Lives On The legend of the Bunny Man lives on to this very day, and things really ramp up in Fairfax County on Halloween night. Every year on October 31st, large groups of people visit the Bunny Man Bridge in hopes of catching a glimpse of the crazy rabbit. While visitors are allowed to take the creepy walk to the bridge, the police barricade parts of the roads to ensure that vehicles aren’t parked on the roadside near the properties of local residents. Everyone understands the attraction to the location because of the spooky legend, as a local police officer was even quoted saying, “It’s Fairfax County’s Blair Witch Project.”

Apparently if anyone dares to venture out to Bunny Man Bridge, especially on Halloween night, they will witness several disturbing events in and around the midnight hour. A group of kids have been spotted hanging out having fun near the bridge, but they always take off a few minutes before midnight prior to the more evil spirit showing up. Just before the clock is ready to strike midnight, rabbits will appear near the bridge, followed by the sight of a light above the bridge – perhaps from the train that supposedly struck and killed the Bunny Man. And then Douglas Griffon makes his appearance at exactly midnight, under the bridge. His soul is apparently glowing so brightly that it’s nearly blinding to the eyes and if witnesses don’t leave at that moment, it is said that he may actually kill them.

It’s definitely a hot tourist destination for people hoping to catch a glimpse of the killer bunny. Although the actual name of the bridge is called Fairfax Station Bridge, most people only know it as the Bunny Man Bridge. In fact, Google Maps has a listing for Bunny Man Bridge.

Horror Movies Based on These Actual Events

The legend of the Bunny Man was the inspiration for several horror movies where the evil character was dressed in a large bunny costume.

In 2001, the film Donnie Darko was released, telling the story of a disturbed teenager who, after barely escaping an odd accident, started having visions of a man in a rabbit suit who made him commit several disturbing crimes.

The 2011 horror movie titled Bunnyman is about a couple of teenagers who get chased by a killer who is wearing a bunny suit. Two sequels were also filmed, entitled The Bunnyman Massacre, which was released in 2014, and Bunnyman Vengeance which was made in 2017 and is the final film in the Bunnyman franchise.

In conclusion, this is a very spooky urban legend to say the least, especially the chilling reality of the story that describes the man dressed in the bunny suit holding an axe and going after a young couple. The story has sparked a lot of interest from paranormal enthusiasts all over, especially around Halloween time. This is one legend that will make us think twice before approaching the cuddly Easter Bunny, which eerily enough, is an unknown man dressed in a bunny costume.