Some of the deepest mines in the world extend miles below the surface of the Earth. Deep, dark pits that stretch on into forever. The world is littered with them and we’ve used them to mine everything from salt to gold to obscure metals like tantalum and gallium. But every so often you’ll find a mine in the world that is less about the ore hidden inside it than some other bizarre inhabitants. A body in a mine is, tragically, not that uncommon. Disasters in mines occur more frequently than anyone would like. Over the last century numbers have dropped significantly, but when you total them all up, the final figure is in the millions. And that’s just in coal mines.

What was unusual was what miners discovered at the Falun copper mine in Sweden back in 1719. Miners had pulled a body from a flooded section of mine, missing his legs but otherwise in good condition. His clothing and the rest of the body looked well preserved and suggested he may have died only a few days prior. This was unusual because that section of the mine had not been used in years.

When the body was put on display publicly in the hopes someone could identify the man, a woman came forward. Her name was Margaret Olsdotter, and she said the man was her fiance. He had gone missing 42 years earlier.

As the body began to dry out, it also began to petrify, according to witness. It became hard like wood. This was because he had been preserved in water full of vitriol, also known as copper sulfate. As it started to evaporate, the body began to decay.

Weirdly enough, they kept the poor man on display for 30 more years. He was later buried in a church. During renovations he was discovered again, and then permanently buried in a cemetery. Once mining operations are done, a mine is a big, empty space with not a lot of purposes. Some places store toxic materials in them. But others are storing more useful things. As it happens, a man is a perfect environment for preserving just about anything. Temperature and humidity are ideal for storing something like a data archive.

GutHub has archived over 21 terabytes of data from their servers, open source software they want to preserve for future generations, and taken it to a mine in the Arctic. In July 2020, they stored everything in the Archive Code Vault in Norway.

Now the data lives in a retrofitted storage contained in a decommissioned coal mine. If all goes as planned, the coded material should stay safe and sound for at least 1,000 years. Lots of communities and neighborhoods end up with unofficial pets. A stray animal that hangs out and everyone in the community comes to know it. That was the case with the dog called The Auditor. He lived in the Berkeley Pit, an open pit copper mine in Montana.

The shaggy dog came and went as he pleased. He would disappear for weeks on end, then return and get fed by whoever was willing to toss him snacks. Although miners and employees would feed him, he was skittish and avoided direct contact.

The Auditor, so named because he showed up unexpectedly, was first seen in 1986. He passed away in 2003, making him at least 17 years old, which is pretty good for any dog, let alone a stray. More remarkable was that an environment engineer performed some tests on the dog’s hair after it passed away.

The Auditor had been living in the mine for so long that he’d managed to soak up a baffling level of chemical compounds. His hair contained arsenic at 128 times the level of a typical dog.

The largest snake in the world is the green anaconda. Although a reticulated python may be longer, the anaconda is far heavier. It can weigh over a quarter of a ton and reach 30 feet in length. The idea of an anaconda devouring a human is not far fetched, though reports of this ever happening are extremely rare. For many people, it is the ultimate nightmare animal. But it could be worse.

In a coal mine in Colombia, the fossil of a snake was discovered that blows any anaconda on earth today out of the water. The snake, dubbed the Titanoboa, reached a length of 40 feet. And while that length is dramatic, it’s not too hard to believe compared to some current pythons and anacondas. But it’s the mass of the snake that makes it remarkable. Titanoboa would have weighed over 2,000 pounds. One full ton of snake. That’s about the weight of a black rhino or a moose.

At its thickest part, the back of a Titanoboa would have been the same height as a full grown man’s waist. At this size, there was likely no prey too large for it back when it slithered through swamps, around 58 million years ago.

When it comes time to retire, most people probably expect a nice, smooth transition. If you work for a big company, the HR department probably has paperwork to file. Things to process for retirement benefits and any other relevant info to categorize you as someone not working there any longer. The Federal government more or less does this as well. Except they don’t have any of this on computer. It’s all in a mine.

Iron Mountain in Boyers, Pennsylvania is an old limestone mine about 630 feet underground. Around 600 people work here at the Office of Personnel Management facility, where every single paper record for every retiring federal employee is stored.

Truckloads of paperwork are delivered every single day to the mine. About 7,000 Federal employees retire every single month. The government employs about three million people, so the number isn’t that drastic. And, despite the 600 employees at this facility, they run at a massive backlog. With thousands of retirements to process, it’s just too much work.

The reason the whole facility is in a mine is because they have so much paperwork to store. Yes, it would be more efficient to do this electronically, but so far no one has done that. In fact, all the work they do on computer gets printed and filed away, too. Congress has pointed out how inefficient this process is as far back as 1981. But fixing inefficiency seems as inefficient as everything else.

Water in a cave doesn’t qualify as unusual. Caves are often damp places, and underground lakes and rivers have existed for eons. But not all water is created equal. Nor is it created at the same time. In one mine in Canada, the water they discovered there predates multicellular on Earth.

The water was discovered deep in a mine in Timmins, Ontario. The age was determined by analyzing traces of elements like helium and xenon discovered in the water. For scientists it was a bonanza, as it was the oldest water ever discovered, and shed some light on what ancient Earth might have been like.

Technically speaking, the water isn’t toxic. It has trace elements in it, but drinking it would be a bad idea. It’s also eight times saltier than sea water.

If you enjoy bike riding for fun or exercise, then you probably know more than a few local bike trails. Depending on where you live, these can take you through some really beautiful parts of town and the surrounding countryside.

If you head to the lead and zinc mines in Mežica, a town in Slovenia, you’ll find arguably the most unique bike trail in the world. The Black Hole Trail is about 10 kilometers long and descends into the earth 150 meters over five different levels. The mine itself was abandoned over 25 years ago until someone got the bright idea to bring it to life again as a trail.

It’s a challenging enduro trail for serious riders, and you can’t navigate it without a guide. Like any mine, there are a lot of twists and turns that could be dangerous if you don’t know where you’re going. 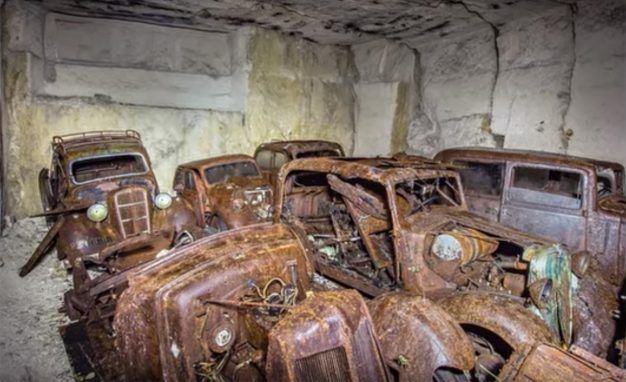 In 2016, a Belgian teacher was roaming through a mine in a French quarry, as one does. When he was down there he stumbled upon tunnels and tunnels of old, European cars dating back to the 1930s. The cars were showing their age, but they had all clearly be parked in there on purpose at some point nearly 100 years ago.

It’s believed the cars date back to World War II. The Germans took cars as they needed or wanted them. Because of that, it’s possible the mine was used as a secret stash, a place to hide the cars until the war was over. Unfortunately, it looks like whoever put there never came back to retrieve them after the war. The end result is a mine full of rusted out husks that have little monetary value but are certainly historically significant.

Salina Turda may not sound enticing to English speaking thrill seekers, but it’s definitely worth a look if you want some unique fun. Located in Romania, the Salina Turda mine was a salt mine that dates back an incredibly long time. The first mention of it in books was from the year 1075. It continued producing salt for hundreds of years until 1932.

During the Second World War the mine saw use as a bomb shelter before being shut down yet again.

In the 1990s, after some extensive and expensive renovations, the mine was reopened to the public. Not just a halotherapy spa, which means salt therapy, it’s also a subterranean amusement park.

The facility features mini-golf, bowling, a Ferris wheel, an underground lake, and billiards among other things. It’s located 120 meters down and you can choose to take the elevator or try the stairs.

The Bonne Terre lead mine was carved into the rock under the town of Bonne Terre, Missouri over the course of 100 years. When the mine finally shut down in 1962, the company in charge shut the power off and that included shutting down water pumps.

Soon enough, water began to fill in the mine. But it wasn’t just a little bit of water by any means. The current owners bought the abandoned mine in the 1970s and by that time the three lowest levels of the mine were totally underwater. That was roughly 88 miles of tunnel. The surface has 17 miles of navigable shoreline, making it the world’s largest underground freshwater lake.

Over 500,000 watts of lighting have been installed to make the mine the world’s biggest underground dive resort. The water stays at a constant temperature all year around, and visibility is excellent. The depths feature all the mining equipment that was abandoned to time.

They call it the Billion Gallon Lake and, at that many miles of tunnel all under water, with some locations going down 40 to 60 feet, it seems an appropriate name. There are dozens of passengers to explore, and many are only accessible to experienced divers due to the complex winding of tunnels.