While humanity may be at the top of the food chain, we don’t hold a candle to many of Earth’s crazy creatures. From pathogen detecting blood to immortality, these animals are incredibly important in the present, past, and future, even though you’ve probably never even heard of them before… Horseshoe crabs may not be the cutest crustaceans out there with their long tails, incredibly thick shells, and very spindly legs. They haven’t changed much in millions of years; 450 million, to be exact. Horseshoe crabs are proof it’s what’s on the inside that counts: their blue blood fetches a pretty penny. Hundreds of thousands of Horseshoe crabs are caught and bled every year in the US. Blood collected from horseshoe crabs goes for $15,000 a quart (!!!). The sky high prices are due to the specialized immune cells found in the blue blood, which medical researchers use to help identify dangerous infections, and bacteria such as e. coli, in things like insulin and on tools like scalpels.

The Horseshoe crab’s blood is so sensitive to contaminates that it can react to an amount of bacteria as low as one part per trillion. The component responsible for this useful reaction is called coagulan, and it causes the blood to coagulate around the contaminates, isolating them in a gel like substance, in as little as 45 minutes. The speed of the reaction combined with the sensitivity is what makes the blue blood so valuable, as prior to its discovery other methods took hours and sometimes days.

Unlike the Horseshoe crab, the humble and microscopic tardigrade is freaking cute. The tardigrade’s bearlike appearance led to the nickname Water Bear, but that’s not what makes them so important to humans.

Tardigrades can survive all sorts of extreme conditions, from ultra subzero temperatures approaching Absolute Zero, which is the coldest temperature we can measure, to the heat of Japanese hot springs. Tardigrades have even survived the vacuum of space. In addition to all of that, tardigrades can survive without water for years on end in a dehydrated state, later reanimating when sufficiently hydrated or exposed to moisture. This extreme survivability may hold the secrets to long term space travel.

Water and food are heavy — every gram makes a difference when going into space. If astronauts can be blasted off in dehydrated stasis for years on end it would drastically reduce the amount of food and water needed for long term voyages.

The Turritopsis Dohrnii is better known as the immortal jellyfish, and that’s no exaggeration. The immortal jelly continually reincarnates, reverting to a polyp state whenever it’s sick, old, or gets injured. These polyps are genetically identical clones of the jellyfish that created them. The polyps attach to the seafloor, and then start the maturation process all over again; in effect, reincarnating whenever the need arises. In theory this reincarnation and regrowth could continue indefinitely. However, in the wild the immortal jellyfish has been known to die. It’s difficult to reincarnate if the jellyfish is eaten faster than it can change states. There’s always a bigger fish, after all.

This cycle of genetically identical clones as a way to turn back the clock could eventually lead to immortal humans, if scientists ever figure out how to copy the jellyfish. 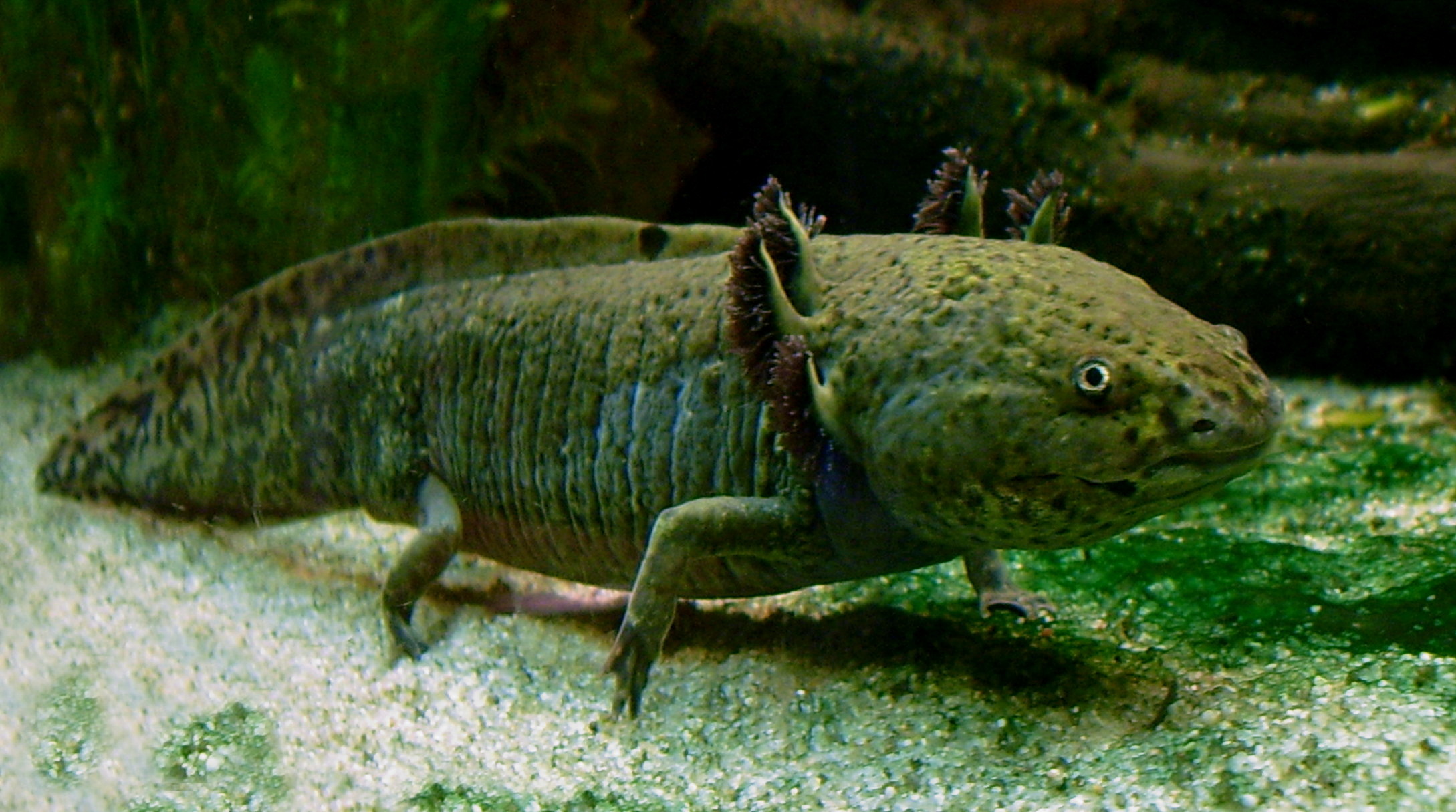 Axolotls are an increasingly rare  species of amphibian, related to salamanders found in Mexico. These adorable little monsters have two unique traits beyond their tentacled faces: Axolotls can regrow limbs, and can take transplants of many organs including eyes, from any host, without the need for anti-rejection drugs.

When a human requires an organ transplant, not just any old organ will do. It must be from a compatible donor and even then it requires a strict regimen of anti-rejection drugs to keep the host immune system from attacking and rejecting the donor organ. If either of the Axolotl’s regeneration or transplant ability could be applied to humans it’d go a long way to improve long term health outlooks for people with organ failure. Instead of waiting for compatible donors or expensive prosthetics, humans could just regrow whatever they needed. Researchers believe the secret to the naked mole rat’s longevity lies in their DNA. Unlike most mammals, including humans, the naked mole rat has several mechanisms that help repair and prevent the damage that occurs as cells age. Inconveniently for humans, this damage is one of a few things that makes us susceptible to cancerous tumors.

Longevity isn’t the only superpower naked mole rats can make use of: their skin is highly resistant to pain even from irritants like acids. Researchers believe this could lead to the development of new and more effective analgesics.

If you’ve ever wondered where jellybeans get their shine, you’ve probably heard of shellac: a shiny glaze that’s also used in wood finishes. What you may not have heard of is the source of shellac.

Shellac is a refined version of the resin known as lac that is excreted by the Kerria lacca, an insect native to Asia, more commonly called the lac bug. It’s sold and stored as dried chips, but then can be dissolved in alcohol for various purposes.

In the early 20th century shellac was used in a massive variety of applications primarily related to wood finishing. Shellac was also heavily used by the record industry: it’s been estimated that in the 1930s nearly half of all records were made of shellac.

As technology progressed many of shellac’s applications were replaced. Nature can’t compete forever.  Modern records are made using vinyl, and although shellac is still available as a wood finish, it’s been relegated to a premium finish, as more durable and cheaper polyurethane based products have risen in popularity.

In addition to all the everyday applications, researchers have found that some varieties of lac dyes may have medicinal uses including cancer treatments.

Shellac of course still lives on commonly in high end instruments from luthiers, and the jelly bean.

Many different species of octopus can change their colors to camouflage themselves, but one of the rarest, the Mimic Octopus, can not only change the color, texture, and shape of its skin, but even its movements and behavior to impersonate and mimic other creatures, such as the flounder and lion fish.

The Mimic Octopus was first discovered less than 30 years ago in 1998 off the coast of Indonesia, and was the first documented species of octopus to mimic the behavior of other species for various purposes.

This shapeshifting ability has inspired some fancy artificial skin to help camouflage robotics, and even some innovative robots made entirely of soft parts.

While these octopus-inspired creations are still in their infancy, it’s a glimpse at what could be a much squishier tomorrow.

With rising ocean temperatures and pollution around the globe, sea coral populations are rapidly shrinking. These colorful invertebrates play a valuable role in human bone grafts.

Even as recently as the 1980s, bone grafts were a very traumatic procedure, requiring donor bone from other parts of the body such as the ribs or skull. This carries an increased risk of complications as that requires more incisions. However, there’s only so much bone to donate in one body, so for patients needing significant grafts, cadavers were often used as donors instead. Using cadaver donors carried risk of infectious diseases, so when coral became feasible it was a dramatic improvement. Researchers have even begun growing coral in labs for the purpose of bone grafting.

Ian has always wanted to write for the Internet! Now that he’s realized his dreams, you can find him on the Dapper Intellectual Podcast or at www.ian.photos.