You know how the longer you sit in a traffic jam, the more it starts to feel like one of the worst jams in history? It’s completely understandable, as traffic jams do have the ability to mess up with our sense of time. Objectively speaking, though, it’s highly unlikely that any jam you’ve ever been a part of even compares to the actual worst traffic jams in history. In fact, some of these were so massive that they’d make your daily rush-hour drive seem like a walk in the park.

Chicago was hit by a particularly bad snowstorm in 2011, as the city was covered in over 20 inches of snow within a matter of hours. While that’s hardly out of the ordinary for Chicago, it also caused one of the worst episodes of traffic congestion in US history.

While it wasn’t a particularly long jam – especially compared to some of the other entries on this list – it’s noteworthy due to what the commuters went through. Around 1,500 cars were stuck on Lake Shore Drive throughout the peak of the snowstorm, with many of the drivers and their families spending their entire night on the road.

It was an almost-continuous storm, too, and got so bad that firefighters had to be called in to rescue people from inside their vehicles. By the end of it next morning, almost all of the cars involved – many with their passengers still inside – were buried up to their windshield in snow.

The fall of the Berlin Wall was a monumental event for Germans – as well as the rest of the world – as thousands of people from the East rushed towards the West to finally be united with their separated kin. As you’d expect, that also ended up causing one of the worst traffic jams in history.

Some estimates suggest that over 18 million people and 50,000 vehicles were stuck on the road connecting the two sides as soon as it was opened. While we couldn’t find any reliable accounts for how long the jam lasted, we’re guessing that’s due to everyone being too excited about leaving East Germany to care about keeping track of the time. A 15-mile traffic jam may sound like a regular drive to the office in huge cities like New York or Beijing, though for the relatively-tiny cities of Europe, it would easily be one of the worst jams in the city’s history.

That’s exactly what happened in Somerset, England back in 2017, when the M5 motorway was jammed up for over 36 miles due to an accidental fuel spill. It took over 15 hours to completely clear both of the lanes, making it the worst episode of traffic congestion in England’s history. 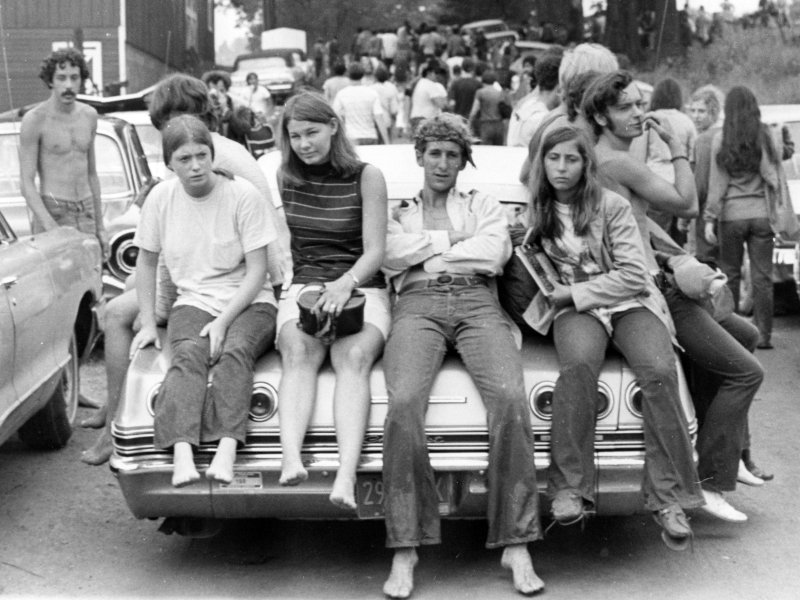 The Woodstock festival was different things to different people – a place for youth to freely express itself, a statement against the system, or simply a cool music festival with a sick lineup. All of them, however, were united in having to sit through the absolutely massive traffic jam leading up to the venue.

For the people who had the chance to experience it for themselves, the jam was as much of an attraction as the festival itself. By some estimates, over one million people attended the festival, and almost every one of them sat through the 10-mile long jam, as it went on for the entirety of the three-day festival. Tokyo is – by all measures – one of the most well-planned cities in the world, as it’s highly prone to many natural disasters like earthquakes, volcanic eruptions and tsunamis. It doesn’t always work, though, as we still don’t have the means to precisely track natural disasters, especially in tectonic hotspots like Japan. It’s also one of the – if not the – most densely populated countries we know of, which makes things even more complicated when things do go south.

That’s precisely what happened on the highway between Hyogo and Shiga on August 12, 1990, when a typhoon warning – coupled with a local festival – caused the worst traffic jam in Japanese history. According to local reports, around 15,000 vehicles were stuck in the 84-mile long jam that day, and it wasn’t cleared up until the next afternoon.

Most of us may know Brexit as the current hip term for Britain’s proposed exit from the EU, though if you go to Indonesia, it still refers to an intersection near the city of Brebes; a town on the main island of Java. Much like the rest of the major intersections around the country, the Brexit intersection goes through massive jams every year around Eid al-Fitr.

In 2016, however, multiple factors – like unusually high traffic volume, rush hours and a bottleneck caused by a nearby fuel pump – came together to result in a humongous, 13-mile jam at the intersection. That would be it, except that it also ended up killing people, which is rare for a traffic jam. A total of 12 people died due to a variety of factors that day – including heatstroke and choking from the fumes – making it possibly the deadliest traffic jam in history.

Any list of the biggest traffic jams in history is incomplete without an entry from China, as it’s infamous for its rush-hour traffic. That’s weird, too, as China also happens to have the largest roads in the world. Imagine being stuck on a huge futuristic expressway for five hours along with thousands – possibly tens of thousands in the bigger cities – of other commuters.

If that sounds bad, it is, though it can get way worse, as all of that is just a regular Thursday evening in many Chinese cities. The largest jams in Chinese history have actually been so enormous that they could only be referred to as ‘godly’.

Take the miles-long jam on the newly-opened G4 Beijing-Hong Kong-Macau Expressway that happened back in 2016. While the idea was noble – giving people 50 lanes instead of the usual 20 – it caused one of the worst bottlenecks ever seen on that highway. Even if there are no reliable reports on how long the jam was, photos suggest that it was wider and larger than any traffic jam most of us would ever see in our lives. Looking at how empty Russia is, you’d assume that traffic isn’t really a big problem there. You’d be largely accurate, too. Unless you’re talking about the larger cities like Moscow and St. Petersburg, the country is surprisingly devoid of traffic problems.

That is unless, of course, something goes terribly wrong, which is exactly what happened in Moscow in 2012. Factors like a particularly bad spell of snowfall, traffic issues in other parts of the city and unusually-high traffic led to perhaps the largest jam in Russia’s history. If the tales are correct, it was around 120 miles long and went on for over three days. If that sounds like no big deal, consider that one motorist reported covering a distance of barely a kilometer (around 0.62 miles) in over 24 hours!

2. Sao Paulo, Brazil… All The Time

While most traffic jams on this list are one-off instances that happened in the past, picking a single jam in Sao Paulo would be a straight up insult to the city’s long history of brutal, unending jams you’d not want to be stuck in. In fact, some of the worst-hit areas of the city may even be in a state of perpetual, infinite traffic at any given time.

According to some reports, all of the rush-hour queues in and out of the city are as long as 112 miles on an average. Again, that’s just a regular day in Sao Paulo. If there’s a problem, the lines can get as long as 183 miles, which is unheard of in almost every other part of the world.

There is no way to rank the absolute largest traffic jam in human history. While some of them deserve a mention due to their harsh conditions – like the jam in Chicago – others took a painfully-long amount of time to clear up; more than 72 hours in some instances.

If we talk about the sheer numbers, however, it’s quite easy to pick out the biggest traffic jam ever. It happened back in 2010 on the Beijing-Tibet highway due to construction and other issues, as it also happens to be one of the widest and most-frequented roads in China.

That’s the reason it was just over 60 miles in length, which sounds like a breeze if you read some of the other entries on this list. What makes it the worst one in history, however, is its duration; the jam lasted for over five days, and we’re just talking about the peak here. Traffic issues were reported even a week after the whole thing was officially cleared.