As Ian Malcolm said in Jurassic Park, “If there’s one thing the history of evolution has taught us, it’s that life will not be contained. Life breaks free, it expands to new territories, and crashes through barriers painfully, maybe even dangerously, but, uh, well, there it is. Life, uh, finds a way.”

Considering the plethora of examples of extremophiles living in incredibly harsh and unexpected places around the Earth, it certainly seems like Michael Crichton and Steven Spielberg were ahead of the curve on this one.

From deep-sea volcanic vents to the vacuum of outer space, here are 10 of the most unusual places where we have found life.

10. Outside the International Space Station In 2017, it was announced that living bacteria was discovered surviving on the outside of the International Space Station and scientists weren’t sure how it got there. But, even though media outlets went crazy with headlines suggesting that bacterial aliens had come to settle on the surface of the ISS, one thing is for certain, these microbes are definitely not extraterrestrial in nature.

Cosmonauts swabbed places on the ISS where fuel waste had accumulated and discovered that bacteria cultures were growing on the surface that hadn’t been there when the station originally launched. But, what’s even more interesting about this find is that scientists don’t think that the ISS’s inhabitants are the source of the bacteria. No, they actually think that (somehow) the bacteria came from the space surrounding the Earth.

It’s also been revealed that certain types of microbes can survive in space for several years. The Yellowstone Hot Springs are a wondrous sight to behold. Visitors to the park marvel at the colorful displays around these boiling pools of water. These springs are absolutely scalding, too, reaching temperatures of 100 degrees Celsius. More than enough to boil most lifeforms on Earth alive.

Yet there is life brewing in these hot springs, extremophiles that thrive on the thermal energy produced by volcanic activity deep beneath the surface. These thermophiles are also responsible for the colorful formations observed by so many of Yellowstone’s tourists.

The discovery of life in these superheated pools has also caused geologists to rethink how they view some of the other colorful formations seen around the park, suggesting that perhaps some of them could be forms of algae that take on pink, yellow, and red hues instead of what we’re normally used to in cooler areas like forests. Antarctica is probably the most alien place on Earth and there are plenty of places where scientists were definitely not expecting to find life, like the extremophiles that were discovered living at the bottom of Ace Lake, a place devoid of oxygen with an average temperature of about 0.55 degrees Celsius.

These extremophiles are called Methanogenium frigidum and Methanoccoides burtonii, and they’re part of a group of organisms called methanogens (named for the fact that they produce methane). These organisms can survive anywhere from the freezing point of water all the way up to 84 degrees Celsius.

However, they’re not unique to Ace Lake. Scientists have discovered patches of biologically diverse microbiomes throughout the Antarctic. The freezing waters surrounding the frozen continent are also home to Antarctic Salps, which look like the very definition of alien, featuring a transparent “body” like that of a jellyfish, internal structures that look like a skeleton made from a tapeworm, and a strange red orb that looks like a bubble of oil in water.

While these things look like jellyfish, they’re more closely related to vertebrates. They’re colonial tunicates that breed quicker than Antarctic Krill (their main feeding source). What’s more is that Salps are becoming more and more dominant in the Antarctic, which is threatening some fish species in the area.

Mponeng Gold Mine is the deepest gold mine on Earth, reaching 3.16 to 3.84 kilometers beneath the surface of South Africa. The conditions in the mine are particularly volatile to life, reaching a staggering 60 degrees Celsius. So, scientists certainly weren’t expecting to find life there, but life they found. 3.21 kilometers beneath the surface, the world’s first single organism ecosystem has been discovered.

This bacterium (called Desulforudis audaxviator) survives without any heat from the sun, living in ancient water that’s trapped in cracks formed in basalt rock. Unlike plants, algae, and some bacteria that use sunlight as a catalyst in photosynthesis to produce oxygen, this bacterium uses the radioactivity of its environment as its food source. The existence of this bacterium has scientists speculating on whether or not similar bacteria could be found on alien planets. 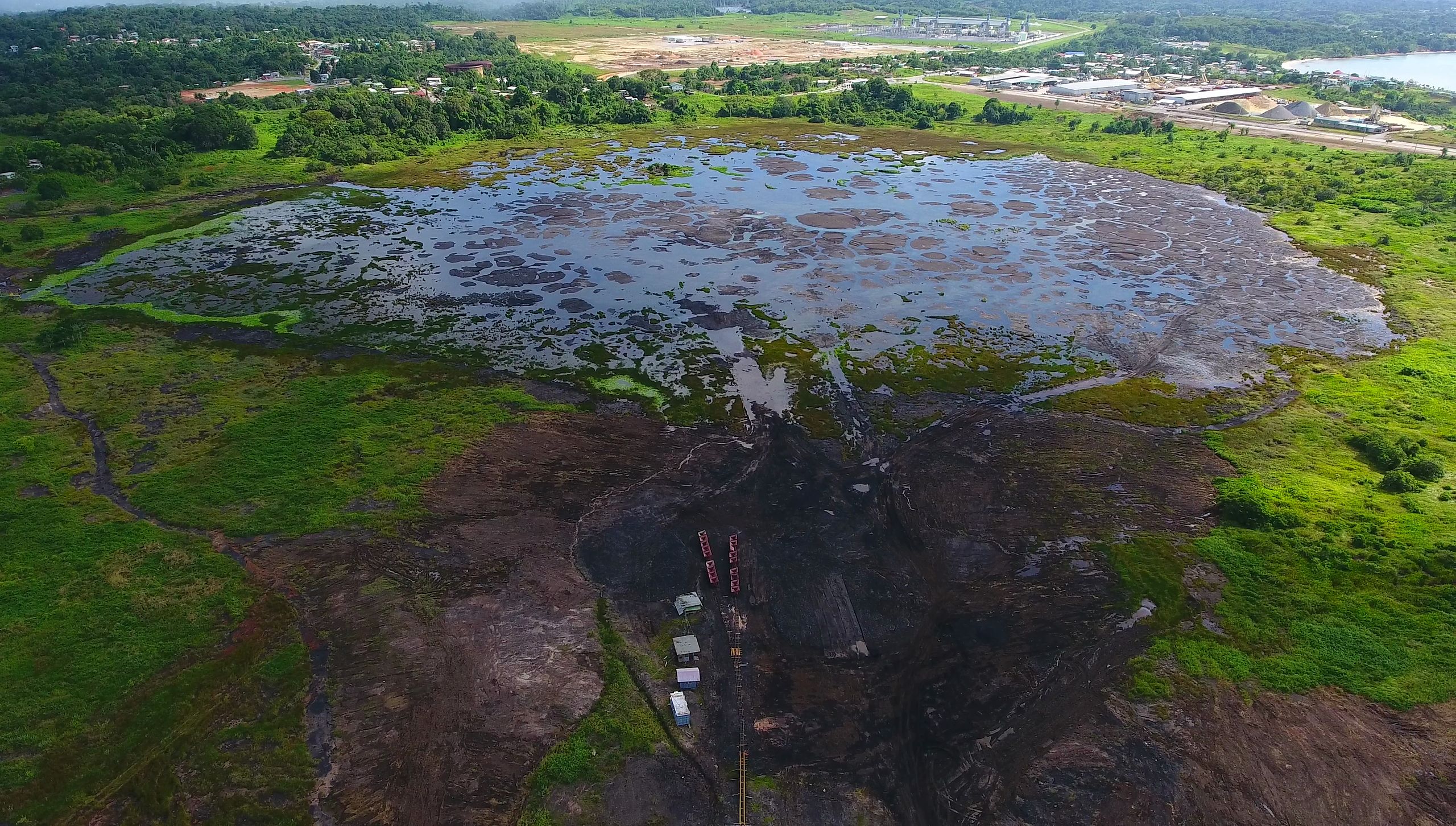 The hot, bubbling lakes of naturally occurring asphalt in Trinidad are some of the closest geological features on Earth that we’ve found to ones we’ve observed on Titan, Saturn’s most interesting moon. These tar pits have been deathtraps for mammals and dinosaurs for millions of years, and scientists wouldn’t necessarily think that this would be an ideal spot for life to thrive.

But they were wrong, as these pits of pitch (the old term for tar) are absolutely teeming with microbial life.

Pitch Lake, located near La Brea in southwest Trinidad, is nearly 75 meters deep and 100 acres wide. Temperatures can range from 30 to 55 degrees Celsius, and the mixture of methane, ethane, and propane is particularly toxic to life. Yet, the tar lake is home to a plethora of single-celled organisms, bacteria, and archaea.

Studies have shown that there are at least 1-10 million single-celled organisms per gram of the stuff. This has suggested to astrobiologists that life may be possible on Titan (and that would be seriously cool if it turned out to be the case). Of all the places on Earth where we thought life might be able to exist, nuclear or radioactive waste storage sites would definitely not be on that list. And yet, not only have we found microbial life that is attracted to pools of this radioactive waste, but we’ve also discovered fungi that eat radiation.

The nuclear power plants in Sellafield in Europe were designed with the knowledge that conditions in the pond where the nuclear waste material is stored would most likely be hostile to life, but this simply isn’t the case.

To put this into perspective, the alkaline PH of the Sellafield pond is somewhere in the realm of 11.4, and it’s highly radioactive. The conditions have even been described as being comparable to industrial bleach.

What’s incredible about this discovery is that studies have shown that Gloeomargarita lithophora and bacteria similar to it may be ideal candidates for microorganisms that might be able to help us clean up some of the most toxic and radioactive places on Earth. The floor of Death Valley can reach a staggering temperature of 93.33 degrees Celsius. Extremophiles are alive and well in and above the floor in salt fissures. These organisms seem to release evaporites when the water around them evaporites, which is something that scientists have observed on the surface of Mars.

In fact, Death Valley is so much like Mars (besides in temperature) that the field tests for the original Mars rovers were done there.

Scientists have continued to flock to Death Valley to study these extremophiles in the hopes that their secrets may lead to the discovery of life on Mars.

Samples were collected from the bottom of Death Valley’s salt pan, the most extreme environment in the scorching hot desert, and what was found is that microbial life seems to thrive, creating purple, green, orange, and black lines along the salt pan, and the hotter it gets, the better they seem to grow. For a long time, it was thought that life could not survive on the ocean floor, and scientists in the 1800s thought it was just a muddy desert. And while it is certainly true that most life can’t survive in the deepest part of the ocean, since James Cameron’s deep dive into the Mariana Trench, discoveries of extremophiles that thrive in extreme pressures and even around volcanic oceanic vents have come to light.

But they’re not just microbes, we’ve discovered entire ecosystems around the deep-sea vents near the Galapagos Islands. Large, red-tipped tube-shaped worms, fish that look like phantoms (or aliens if you’d prefer), shrimp featuring eyes growing out of their backs, and a plethora of other unique lifeforms have been discovered living off a process that’s known as chemosynthesis, which allows microbes to convert the heat around these volcanic vents into energy.

These microbes also make up the base of the food chain around these vents. The stratosphere starts at around 10.66 kilometers above the surface of the Earth, which is an altitude that some commercial airliners fly at. This region extends to about 50 kilometers above the surface of the Earth, and the conditions in the stratosphere are especially damaging to most forms of life. It’s freezing, dry, ultraviolet radiation is most potent here, and there isn’t much air pressure to speak of either.

Which is why it was surprising to the scientists who discovered that the stratosphere is teeming with significant numbers of microbes. The temperatures and radiation levels in the stratosphere are also very similar to what would be found on Mars.

Most bacteria and fungi don’t survive these kinds of conditions, but the ones that do rely on a few biological strategies like forming spores around their DNA. Other examples include extremophiles with repair mechanisms for damaged DNA and organisms that have evolved to survive off of extremely low levels of water.

The Deep Carbon Observatory (or DCO) has discovered evidence of life permeating the depths of the Earth, stretching from the surface to the core. The DCO is made up of over 1,000 scientists from 50 countries around the world, and they’ve found evidence of a patchwork of microbial ecosystems that stretch as deep as 10.5 kilometers beneath the ocean’s surface.

The conditions deep inside the Earth are more than a little extreme, reaching temperatures exceeding 100 degrees Celsius and pressures beyond that of the seafloor (which is already enough to cause a bowling ball to implode).

In fact, scientists now think that there are 17 to 25 billion tons of carbon down there, and at least 300 to 400 times the carbon mass than all the humans that live on the surface of the Earth.

That’s huge, and the fact that life seems to be so resilient suggests to scientists that it’s possible that similar deep biomasses may exist beneath the surfaces of Titan, Venus, and even Mars.