America’s entrance into World War II back in 1941 triggered the golden age of pinups, pictures of smiling women in a range of clothing-challenged situations. The racy photos adorned lonely servicemen’s lockers, the walls of barracks, and even the sides of planes. For the first time in its history, the US military unofficially sanctioned this kind of art: pinup pictures, magazines and calendars were shipped and distributed among the troops, often at government expense, in order to ‘raise morale’ and remind the young men what they were fighting for.

The heyday of the pinup was the 1940s and 50s, but pinup art is still around. To this day, pinup fans emulate the classic style in fashion, merchandise, photography, and even tattoos. 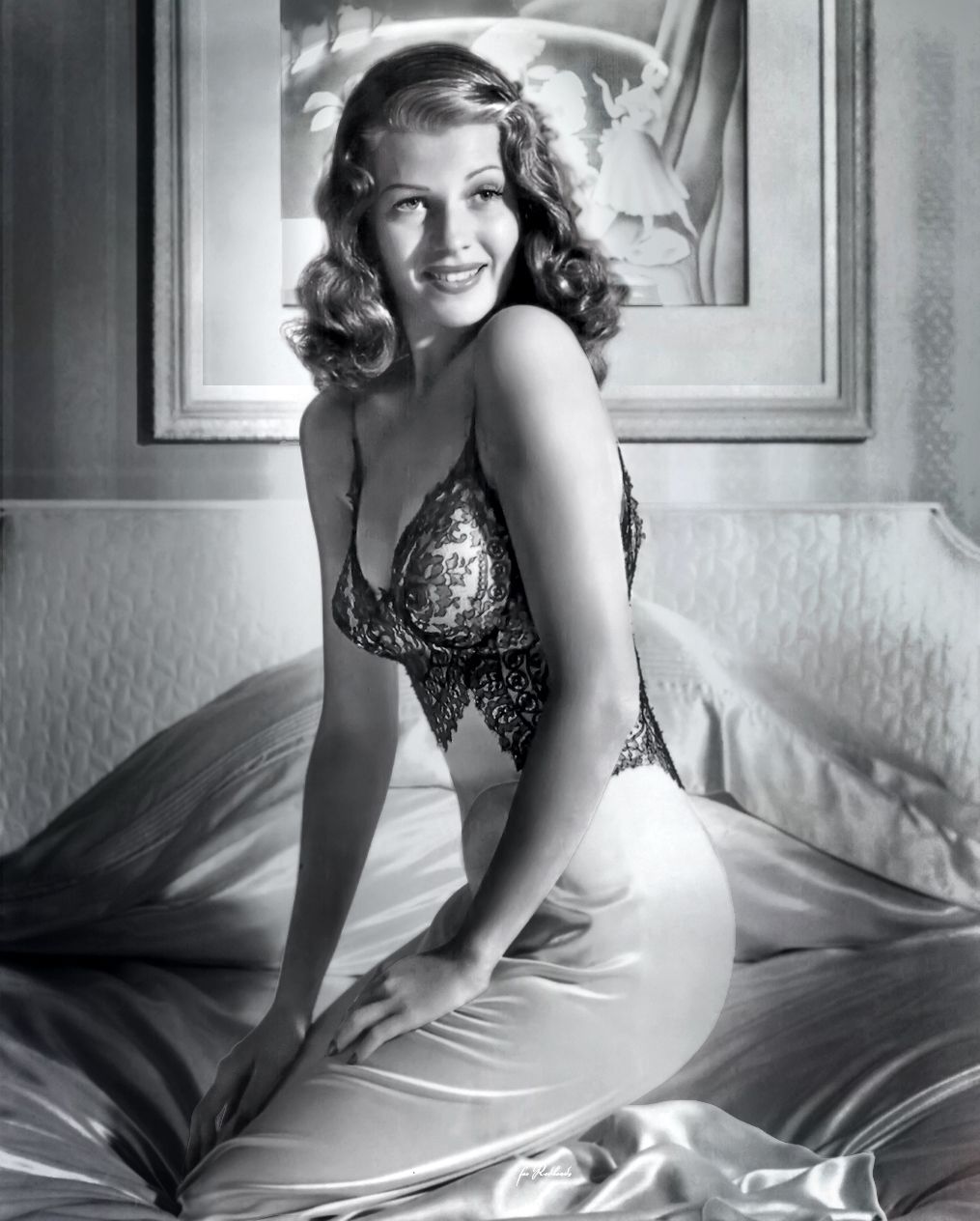 Rita Hayworth’s famous pose in a black negligee quickly made its way across the Atlantic in 1941, as troops brought the picture with them on the way to war. It ended up as the second most popular pinup picture in all of World War II. Hayworth, whose two brothers both fought in the conflict, didn’t just pose for pictures: she also was involved in selling war bonds, and appeared in USO shows.

Hayworth’s famous strawberry-blonde hair was actually an act: her real hair was jet black, but she dyed it red and even altered her hairline after she became concerned about being typecast in ‘Hispanic’ roles. 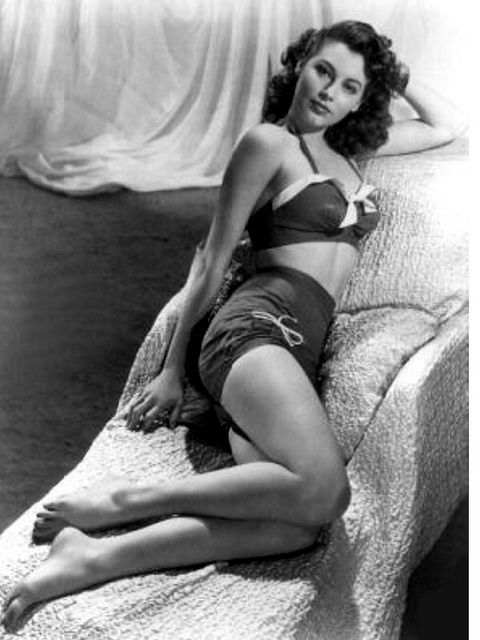 Back in the 1940s, the studio system still ruled Hollywood, and actors and actresses were usually contracted exclusively to particular studios. Gardner was an ‘MGM girl’, discovered by the studio at age 18 after a photograph was spotted by talent scouts. A surprised Gardner quickly relocated to Hollywood.

Her early pinup work was typical for the time, involving shots of her on the beach or in bathing suits. Later in her career, Gardner became famous as a siren and a femme fatale, and switched to a less ‘innocent’ image, posing in heels and long black dresses. Gardner married Frank Sinatra in 1951 and although the marriage lasted only six years, she later said that he had been the love of her life.

As well as pinup photos, the US Army Air Force also unofficially permitted ‘nose art’, drawings of scantily-clad women on the fuselage of bombers and fighter planes, as a way of boosting pilot morale. Artists, often servicemen themselves, drew their inspiration from men’s magazines, popular actresses, and real-life models.

Unlike many pinups, bomber girls weren’t just about pictures of attractive women: the female figures were often regarded as mascots or lucky talismans that would ensure the plane’s safe return home. Sociologists have linked airplane nose art to the carved figureheads once found on the bows of ships, which superstitious sailors regarded as a type of good luck charm. The art form saw a resurgence in the US military during the first Gulf War, but was officially banned in 1992 after complaints from feminist groups.

Pinup drawings were not just limited to planes: many of the most popular pinups of the time were produced by commercial artists. ‘Elvgren girls’ was the nickname given to pinups drawn by artist Gil Elvgren. He began his focus on pinup art in 1937, but his long career also involved advertisements for Coca Cola and General Electric.

Elvgren was well-known for painting his pinup subjects in imaginative situations: water skiing, climbing trees, doing yard work, even skeet shooting. Many pictures featured a young woman in a situation that accidentally revealed her stocking tops and garters. Rather than overtly titilating imagery, Elvgren seemed to go more for personality and even humor. 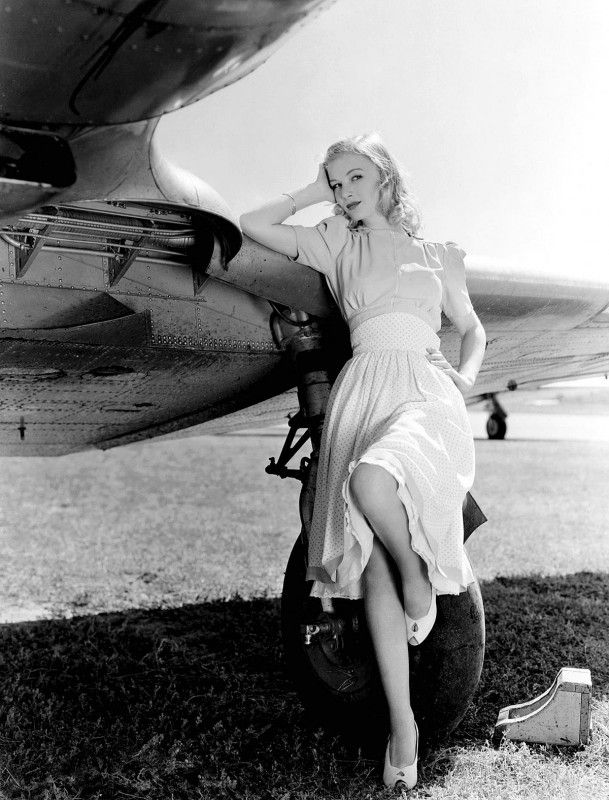 Outside of pinup shoots, Veronica Lake was also a popular film noir actress. She was born with the slightly less glamorous last name of ‘Ockelman’, but a smart producer changed it to ‘Lake’ to evoke her blue eyes. Lake was famous for her blonde, wavy ‘peekaboo’ hairstyle, the bangs of which covered her right eye. In the 1940s, women across America sacrificed half of their peripheral vision in order to imitate this hairstyle. Lake’s acting was praised by critics, but she gained a reputation for being difficult to work with, and her career didn’t last past the end of the decade.

One of only a few female pinup artists in a male-dominated field, Mozert had the advantage of being able to use herself as a model, something the male artists presumably never did. In fact, Mozert paid her way through art school in the 1920s by modeling, and would later often pose using a camera or a mirror to compose her paintings. As well as pinups, Mozert produced hundreds of novel covers, calendars, advertisements and movie posters during her career. Russell was nicknamed the “sweater girl” after the garment that best emphasized her two most famous assets. In fact her debut film, The Outlaw, was almost pulled by censors who were concerned about the amount of cleavage she showed. Comedian Bob Hope once joked about how difficult it was to describe Jane Russell without moving your hands, a reference to her hourglass figure. Russell’s most famous set of pinup shots shows her lying relaxed in a pile of hay, holding a revolver.

Despite her detractors, Russell had a long and successful acting career, and was later best known for her part alongside Marilyn Monroe in Gentlemen Prefer Blondes.

Probably the most popular pinup artist of the era, Alberto Vargas was already a successful magazine and poster artist when he signed a contract with Esquire magazine to produce monthly pinup art in 1940. He worked with Esquire for five years, during which time millions of magazines were sent free to World War II troops. Vargas received piles of fan mail from servicemen, often with requests to paint ‘mascot’ girls, which he is said to have never turned down.

Unlike Gil Elvgren’s pinup work, Vargas’ female figures were always shown on a featureless plain white background. While Vargas Girls were clothed for the most part, their very thinly-veiled eroticism made Vargas and Esquire magazine the target of censors later in the war. 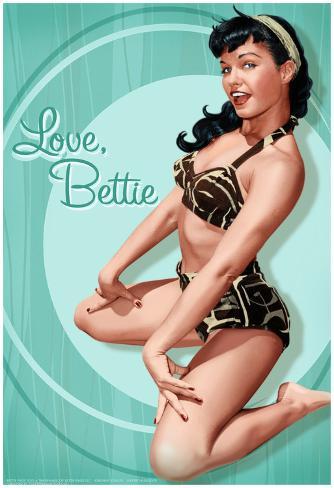 Bettie Page rose to pinup fame only during the 1950s, later than the other models on this list. Although her entire modeling career lasted only seven years, she’s probably the most enduringly popular and recognizable pinup model today. Her distinctive bangs (a photographer thought them up to hide her high forehead) are still copied by young women. According to her fans, Page’s unique appeal lies in her natural smile and joyful appearance. Instead of pouting, she made sexiness seem fun.

After her retirement from modeling, her work lay forgotten for decades but resurged in the 1980s. Since then, public-domain images of Page have found their way onto merchandise, comics, and posters. A Seattle homeowner even painted a two-story version of Page on the side of his house she is cleverly covered up by the building’s eaves). Shortly after her death in 2008, Reason magazine called her pinup work “one of America’s most enduring brands.”

The prize for the most popular piece of pinup art during WWII went to Betty Grable, who posed in a white bathing suit and high heels, looking over her shoulder. Betty’s studio, Twentieth Century Fox, provided five million copies of this iconic picture to distribute to troops. And her success outlasted the conflict: after the war, Grable became not only the top female box office draw, but the most highly paid woman in America, earning about $300,000 a year.

Betty’s legs, prominently featured in her famous photograph, were famously insured by her studio at a million dollars each – and that’s in 1940 dollars. Whether this was actually considered a wise investment, or was simply a publicity move by her studio, is still up for debate.