Unless you are fascinated by mummies, the beauty of their well-preserved bodies may be lost on you. But surely you can appreciate the shapely leg of a woman from the Bronze Age, the supple skin of a wife from the Western Han Dynasty, and the enigmatic smile on the face of King Tutankhamun’s grandmother. The trick to admiring the flesh of these women – each of which is at least a millennium old – is to compare them to their ancient peers and to appreciate that it should long ago have crumbled away… 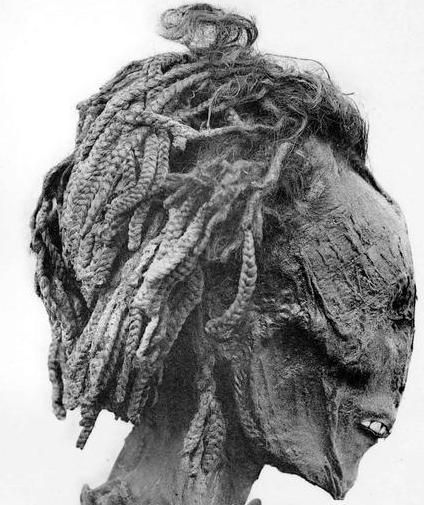 Queen Anhapu had been mummified for over 1,000 years when she was found with other ancient Egyptian royals in the Deir al-Bahri cache in 1881. She had a garland of flowers around her neck and was sporting an intricate hair weave. Her white teeth, long eyelashes, low forehead, large eyes, and prominent cheekbones are remnants of her beauty

It was only in 2007 that this 3,500-year-old mummy entombed in Egypt’s Valley of the Kings was identified as the prosperous female pharaoh Hatshepsut. Idealized statues portrayed the ruler with a false beard and obscured her breasts. Analysis of her remains indicates that she had diabetes and arthritis, and likely died of bone cancer. In appearance she was obese and had bad teeth. While her successor tried to erase all records of her reign, her royal mummy was hidden and protected. She had been carefully wrapped and the fingernails of her curled left hand were painted red and outlined in black. 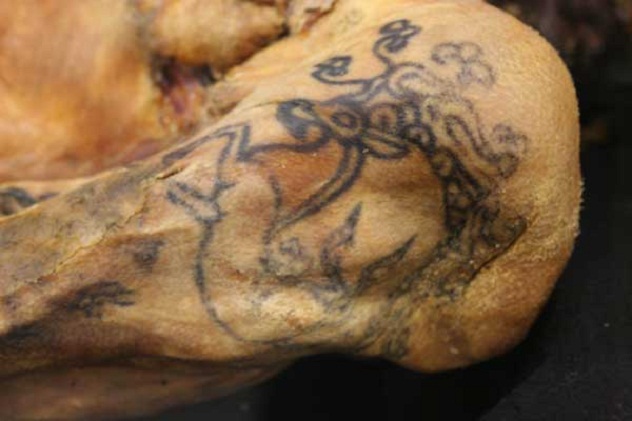 Also known as the “Princess of Altai,” this 2,500-year-old woman was discovered in Siberia in 1993. Although the meaning of the tattoos that stretch down her arms are uncertain, the deer theme is repeated on her tree trunk coffin. The headdress she was wearing and the grave goods entombed with her imply a high status. The cold Russian steppes preserved her delicate skin as well as her bones. As the wife of the ruler of Dai during the Han Dynasty, Xin Zhui led a life of luxury 2,000 years ago in China. When that life ended at the age of 50, the privilege did not. She was wrapped in 20 layers of fine silk, submerged in an “elixir of immortality,” encased in four coffins, surrounded by five tons of charcoal, and entombed fifty feet underground. The result is surprising. The body of the “Lady of Dai” has been declared the best-preserved mummy ever seen, with blood that is still liquefied, organs that are still intact, and limbs that are still flexible. 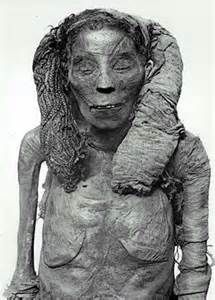 When he unwrapped her well-embalmed mummy in 1909, Egyptologist G. E. Smith paid Lady Rai a left-handed compliment, calling her “the least unlovely” of the existing female mummies. She took great care in her appearance, as indicated by her elaborately styled hair and a remnant of the jewelry with which she was adorned. Now understandably flattened, her breasts obviously offered ample cleavage during her relatively brief life 3,600 years ago. 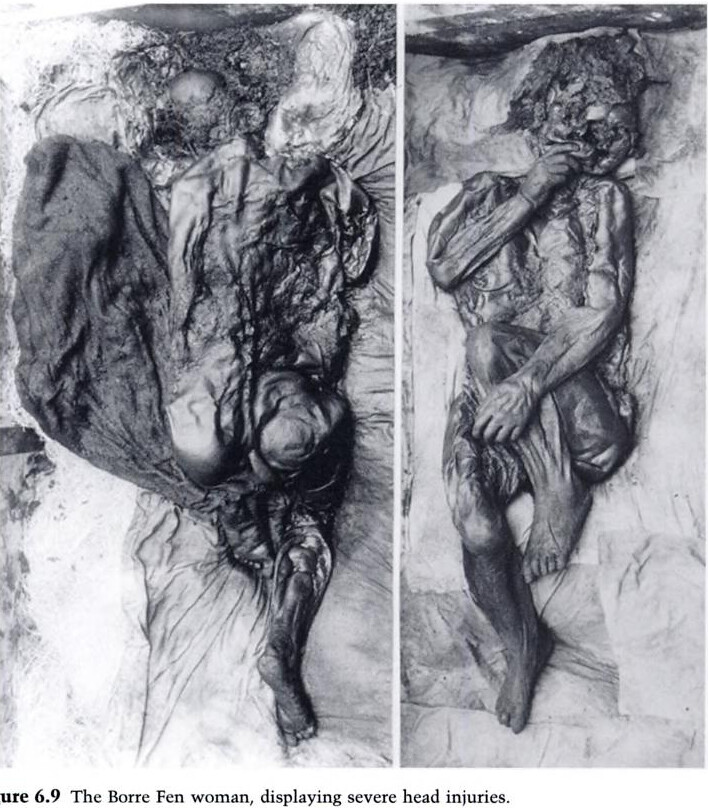 Workers digging peat in Denmark discovered this 2,700-year-old body in 1947. They damaged her head with their shovels, depriving us from looking her in the face, and researchers have not been able to determine her cause of death. Like other bog bodies, the Borremose Woman (named for the swamp in which she was found) may have been a sacrificial victim. If so, she was treated with care after death and wrapped in a big woolen blanket. But it was the action of the tannin in the peat, not her Bronze Age contemporaries, that preserved (and darkened) her skin so well that she still has fingerprints.

The body of this 3,000-year-old Egyptian woman received the best treatment that the 21st Dynasty could offer, including painting with the typically female color of yellow ochre. The preservation was intended to leave her looking as lifelike as possible, and its quality reflects her high status as a priestess. Her embalmers would have taken great care as they removed and replaced her organs through a covered incision in her abdomen, while other cuts allowed her abdomen, back, arms, and legs to be painstakingly padded. Special attention was paid to the appearance of her eyes, and her neck was swathed with linen in such a way that it remains statuesque to this day.

3. Profile of the Beauty of Xiaohe

This woman, excavated from the Xinjiang Uygur Autonomous Region of China still turns heads after 3,800 years. She is one of several mysterious mummies touring in an exhibit called “The Secrets of the Silk Road” who have unexplained Western features. Though her origin and identity are unknown, her long nose graces a particularly well-preserved profile.

2. Hair of Queen Tiye aka the Elder Lady

The so-called “Elder Lady” has survived more than three millennia with a full head of auburn hair falling across her shoulders. A strand of this hair was matched to a lock of hair that had been discovered in King Tutankhamun’s tomb. The keepsake had been kept in a tiny coffin inscribed to his beloved grandmother Queen Tiye, and DNA from the hair and the mummy proved the relationship in 2010. 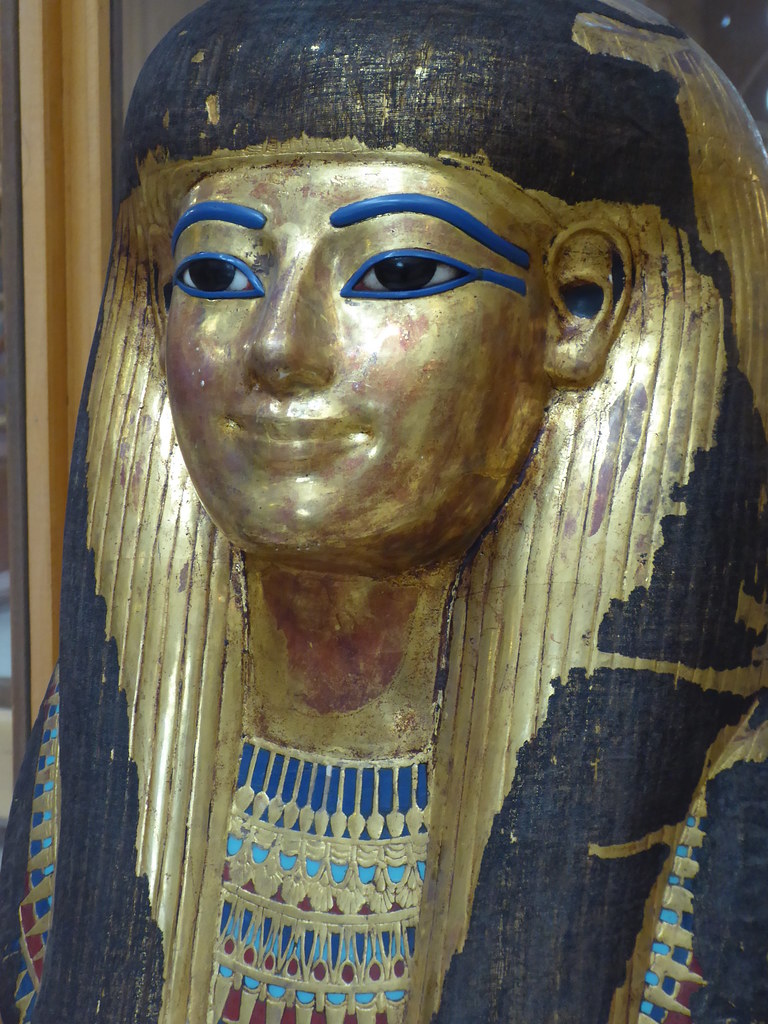 The elderly couple Yuya and Thuya were courtiers in Egypt 3,800 years ago. Thuya still wears an enigmatic smile that delights the viewer to this day and does not speak her secrets. Despite the plunder of the pair’s grave goods, their mummies remained remarkably well-preserved. And their tomb is said to be one of the most spectacular ever found in the Valley of the Kings – until the discovery of the tomb of their great-grandson, King Tutankhamun.

by Christine Quigley of quigleyscabinet.blogspot.com