In these trying economic times, people are getting more and more creative in their efforts to scrounge together some extra cash. Notice we said “creative” and not “sane.”

10.  Being Really, Really Good at World of Warcraft

Though difficult, the theory behind turning “I play video games a lot” into a “I have a lucrative career” is almost disappointing in its simplicity: players amass huge amounts of Gold (in-game currency), and then strike up deals with people to exchange the Gold for real-life money, sometimes through a Paypal account and sometimes with their own websites. Since some of the most fun parts of the game (buying sweet weapons and dragons to ride on) cost massive amounts of Gold and, since WoW players are already used to paying for their fun (a subscription costs $15 a month), finding buyers isn’t that hard.

An alternative is character building, where players will get a character to “Max Level” and then sell that character to other players. “Max Level” is considered by many to be the true start of the game, with the first few hundred hours of play nothing but tedious grinding. If your response to this is “doesn’t the ruin the point of the game?” then congratulations on being a totally smug jerk. Also yes, it does.

Though to be fair, we should mention that all of the above violates the agreed-upon terms of service for World of Warcraft, making it effectively illegal. However, Blizzard Entertainment’s new game, Diablo 3, features a built-in auction house that works with real money.

9.  Begging for a High-Paying Job on the Street While some people were surprised to see a well-dressed man wandering around Denver asking random people on the street for a job, this strategy has proven itself successful on a few occasions. One Occupy Wall Street protester simply changed her sign from “Go to Hell, 1%” to “Hire Me Please, 1%” and got a job almost immediately (she also had a PhD in Biochemistry, so you Philosophy majors need not bother trying this).

She’s not alone. Dianez Smith tried the same thing, holding a sign on the side of a packed street during rush hour in Washington DC, and managed to pick up a job as a legal assistant in a law firm.

Holding a sign and waiting for someone to notice is the low-tech version of Monster.com, so this makes more sense than you might realize. Plus, hiring someone off the street is a great PR move for a major company looking to reconnect with the plebeians.

In June of 2011, James Verone walked into a bank, handed the teller a piece of paper saying “I’m robbing the bank, please give me $1”, sat down, and calmly waited for the police. At 59 years old, recently laid off, and diagnosed with a potentially fatal growth in his heart, getting arrested was his only option: as wards of the state, prisoners are more entitled to free healthcare than poor people.

The big-house also provides plenty of opportunities for people who are looking for a chance to exploit the system. This guy amassed $1,200 in change by exploiting a glitch in the phone system — a sum he promptly spent on bail.

For guys, this pretty much amounts to pocket change — depending on your height, education, fitness and sperm motility, you can make anywhere from $1 to $200 a shot. Enough to keep your cellphone ringing, but depending on who you are, maybe not enough of a consolation for the knowledge that there’s up to ten little versions of you running around out there.

Women, however, are compensated noticeably better — depending on their education and fitness, they can make upwards of several thousand dollars for donating their eggs. But keep in mind that donating eggs amounts to more than just hiding in a room with a magazine for a few minutes. Donating eggs is an invasive medical procedure involving things we probably shouldn’t talk about. This is a family site, after all.

6.  Pretending to Be Homeless 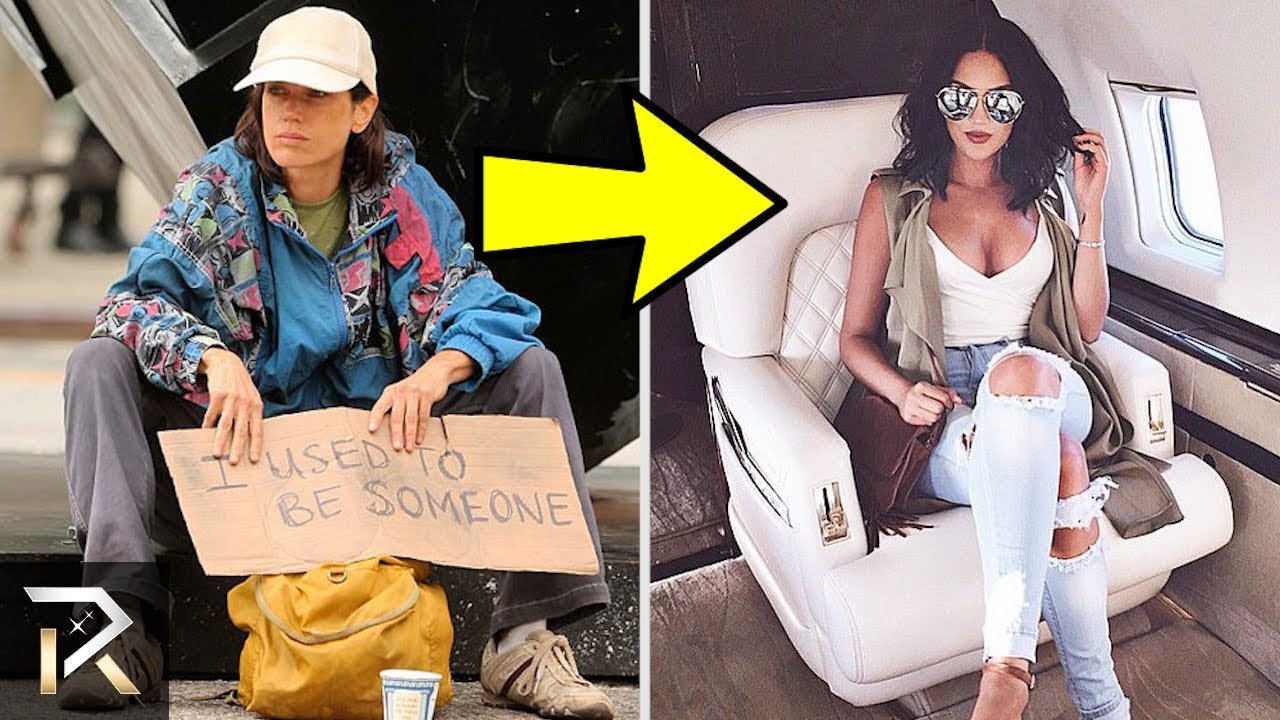 To be 100% clear, TopTenz is not saying that homeless people are rich or scamming you. The vast, vast majority are hungry, sick, without shelter, and a heartbreaking number of them are children. If you have a soul and some money to donate, the National Coalition for the Homeless are the people to give to.

The difference is basically resources: if you find yourself homeless, it’s frequently due to a lack of standard job-finding and personal interaction skills — the same things that make panhandling difficult. Statistically speaking, the person you see asking you for money on the street probably is homeless, and if you’re not going to give them money you should still take the time to acknowledge them. Because they’re people.

5.  Diddling With Your SmartPhone

As the I’m-Desperate-For-Cash-But-Still-Fork-Over-$100-A-Month-For-My-SmartPhone’s-Data-Plan economic niche continues to grow, so do the opportunities tailored just for them. Check out these smartphone apps — all designed to give you, the smartphone wielding hipster, the opportunity to line your pockets with crisp $1 bills.

So next time you’re on the bus and have that moment where you realize that everyone but you is playing with their smartphone, remember that at least one of them might technically be at work.

4.  Begging For Money on the Internet 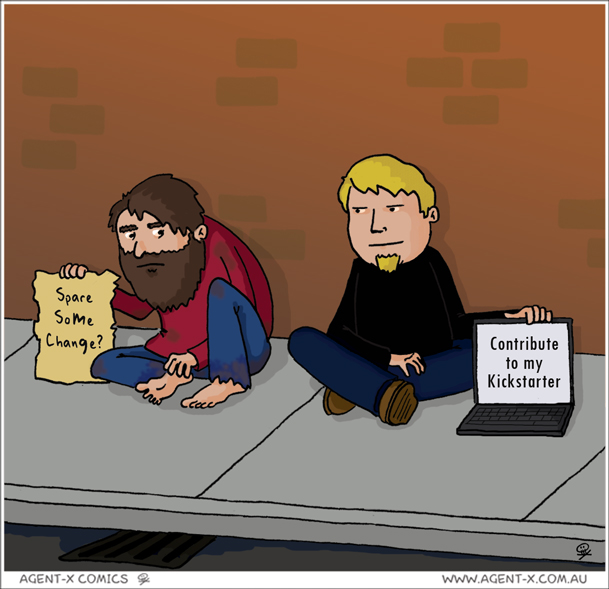 Unlike the other examples, this isn’t a trend — just one story. But there’s no reason it couldn’t work for a lot of people.

In 2002, Karyn Bosnak was a thirty-year-old talk show producer living in New York. Due to her uncontrollable spending habits, she ran up $20,000 in credit card debt, as well as being a not-very-good producer with an obnoxious and unnecessary “y” in her name, she lost her job and found herself unable to pay it back.

Until June of 2002, when Karyn started SaveKaryn.com, in which she just straight up asked strangers for money. The site read:

“WANTED: $20,000. CREDIT CARDS ARE BAD. Hello! My name is Karyn, I’m really nice and I’m asking for your help! You see, I have this huge credit card debt and I need $20,000 to pay it off. So if you have an extra buck or two, please send it my way… Together we can banish credit card debt from my life.”

In twenty weeks, she was debt-free — entirely thanks to donations. We dunno what this says about society (try doing this as someone other than a pretty white girl) but hey, whatever works, right?

3.  Selling Stupid Stuff on the Internet

Items titled “Ghost in a Jar” and “Britney Spears‘ Chewing Gum” have all fetched a pretty penny on eBay, but those are just one-offs. The real amazing stories are people who managed to build a career out of selling the same stupid thing over and over again — like Irishman Pat Burke did with dirt.

To be fair, it is Irish dirt, which is rumored to be the best dirt on Earth (Editor’s Note: is that actually a rumor, or something you made up, just now?). One guy in Massachusetts spent $148,000 on dirt to build his house on. hey, you never know. Jimmy Hoffa or DB Cooper could be buried in that dirt, and selling off their mummified corpses would net you at least a bajillion trillion dollars.  Dead mobster dirt pays for itself!

But at least Pat is selling an actual thing. Allow us to present to you the Million Dollar Homepage — a blank website with a million pixels where each pixel was for sale for $1. It was launched by Alex Tew, a 21-year-old from Wiltshire who was trying to pay for his business management classes.

The final product is a strangely haunting mishmash of commercials and insanity that managed to pay for Tew’s business school, and provide the internet with something that it can’t look away from. He created a space that had no value except the value he gave it, and charged you to enter. And then everyone paid.

The newest fad sweeping the weirdest parts of the world is “Life Coaching.” It’s pretty much every jerk’s dream job: you tell people what to do, and they do it. That’s it — no necessary qualifications, no extra responsibilities, no accountability. You just give advice and get paid.

As if that weren’t easy enough, you aren’t even required to come up with the advice. In fact, you’re not allowed to, as this job description explains: “(my coach) determined that I needed to improve my social skills, so he gave me assignments like “smile at 10 people today”…I thought that was a stupid assignment, so I didn’t do it…as a coach, it really wasn’t his place to set goals for me.”

The guy is literally complaining about the coach telling him to do something he didn’t want to do. That severely limits what a life coach’s responsibilities can actually be, right? By our understanding, a life coach is a person that gives advice that they’ve already been told to give by the person they’re giving the advice to. Is that clear to anybody? Is it a bad sign if your job description doesn’t make grammatical sense? 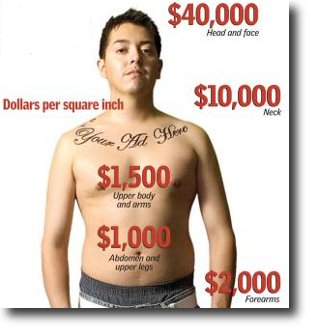 How much does your dignity cost? If you answered like a human and said “no amount of money could buy my dignity,” then you just lost capitalism. Don’t feel too bad, though, because this is the woman who’s winning.

That woman got a casino’s website tattooed on her forehead for $15,000, or roughly one penny for every time some half-wit internet writer has used her as comedy fodder. A lot of people have heard of the Golden Palace Forehead girl, but what many don’t realize is that this type of thing isn’t even that uncommon.

Okay, we’re going to stop right here because we at TopTenz try to avoid passing judgement on other people’s lives whenever possible. Instead of making any more jokes, we’re just going to very politely applaud these people for their dedication to their oh-so-crazy schemes.