We’ll listen to any kind of song, no matter what, even if we can’t understand it. English-speaking audiences are incredibly open-minded that way. So what if the lyrics are in German or Korean? So what if we have absolutely no idea what the heck it’s about? But just in case you’re curious, here’s an explanation of a few of those non-English numbers.

Sukiyaki is a tasty Japanese dish with thin slices of meat and vegetables cooked in soy sauce and ginger. And it’s got nothing whatsoever to do with this song about a heartbroken lad fighting back Niagara Falls:

I look up as I walk,
So that the tears won’t fall,
Remembering those spring days.
But I am all alone tonight.

The original title, “Ue o Muite Aruko,” means “I look up when I walk.” But those savvy music promoters knew a restaurant order would fly a lot better with Western audiences—”Sukiyaki” is the only Japanese-language song to crack the US charts. Maybe Snoop Lion will release a torch song in Japan titled “Creamed Spinach.” At least the whistling portions of “Sukiyaki” aren’t lost in translation.

You can’t keep a good language down, not even a dead one. It took a German, new age band to come up with this little ditty in Latin and French that begs the musical question, “Sade, are you diabolical or divine or what?” Enigma copped the tune’s Gregorian monk tracks from another recording without permission and got taken to court (agents of God are everywhere).

The lyrics themselves run pretty shallow for a piece all about the Marquis de Sade. It’s really one big question mark with no exclamation point:

Popularly remembered as The Singing Nun, Ms. Deckers recorded this acoustic account of how St. Dominic, way back in the early 1200’s, went a’crusading and established a franchise. As the story goes, the Albigensian heresy, taking place in the South of France, rankled the heck out of the Catholic Church and prompted a little intervention. Dominic’s efforts went so well that they paved the way for the Dominican Order of monks and nuns. Despite the fame of “Dominique,” the artist also known as Soeur Sourire (“Sister Smile”) eventually left the church, experienced a heap of personal controversies, and took her own life at the age of 51.

Deckers’s song recounts Dominic’s tale in a bouncy, upbeat fashion—call it downright jaunty. The lyrics keep it light and simple, as demonstrated by the chorus:

Dominique, nique nique,
Over the land he plods along,
And sings a little song.
Never asking for reward,
He just talks about the Lord.

Ritchie Valens achieved plenty in a recording career than spanned only eight months. He died at the age of 17 in a plane crash that also took the lives of singer-songwriter Buddy Holly and radio deejay J.P. “Big Bopper” Richardson. His biggest hit proved to be the teary ballad “Donna,” but the 45’s B-side offered a rock ‘n roll slant on a traditional Mexican folk song, the likes of which had never been heard before. Valens, born Richard Steven Valenzuela, didn’t speak a lick of Spanish lingo and had to be coached through the entire rendition of “La Bamba.” So what does it mean? In Swahili it means “the plate,” but it’s simply the name of a dance down Mexico way. The lyrics don’t have a lot to say other than “party on, dude:”

J-pop isn’t all about sugarcoated love and loss … not completely. This piece of bubblegum power-pop from the five-girl troupe takes a contemporary spin on an old line of propaganda: “Be happy in your work.” The lyrics leave wiggle-room, interpretation-wise, but they certainly celebrate and support the working class hero. The most amusing note here is the messenger: a righteous anthem delivered by music stars all under the age of 21.

Let’s sing our pride of labor right now.
If we all scream together we may have a chance at winning.
You’re not a Dom Perignon popping celeb.
We are working, labor for you.
The present and our fate are relying on us.
The higher-ups took off running.
If you’re in their position, it’s understandable.
All I have is you, so it’s easy for me.

“Jai Ho” took the world by storm. It won the Best Original Song Oscar for being featured in Slumdog Millionaire after another director took a pass on it. The lyrics, delivered in Hindi, Urdu, Punjabi and Spanish, run like a celebratory prayer, giving praise to the gods, destiny, or the undying spirit of humankind. The title can be interpreted as “praise you,” “may you win,” or “victory to thee.” Applied to the story of an impoverished youth who reaches the heights of game show superstardom, the lyrics fete the underdog—you just can’t keep a good slumdog down.

Victory to thee.
Come below the decorated tent of life.
Come below blue sky decorated with jari threads.
Slow, really, I lost my life.
Spent my nights dancing on coal.
I blew the sleep in my eyes with air from my mouth.
I burned my finger with blue star.

The Pussycat Dolls recorded an English re-interpretation, also in 2008, crafted into a set of sexually charged lyrics. Then again, you don’t have to take this version at face value—push the envelope just a bit and you could see it as a nice little ode to drug addiction. 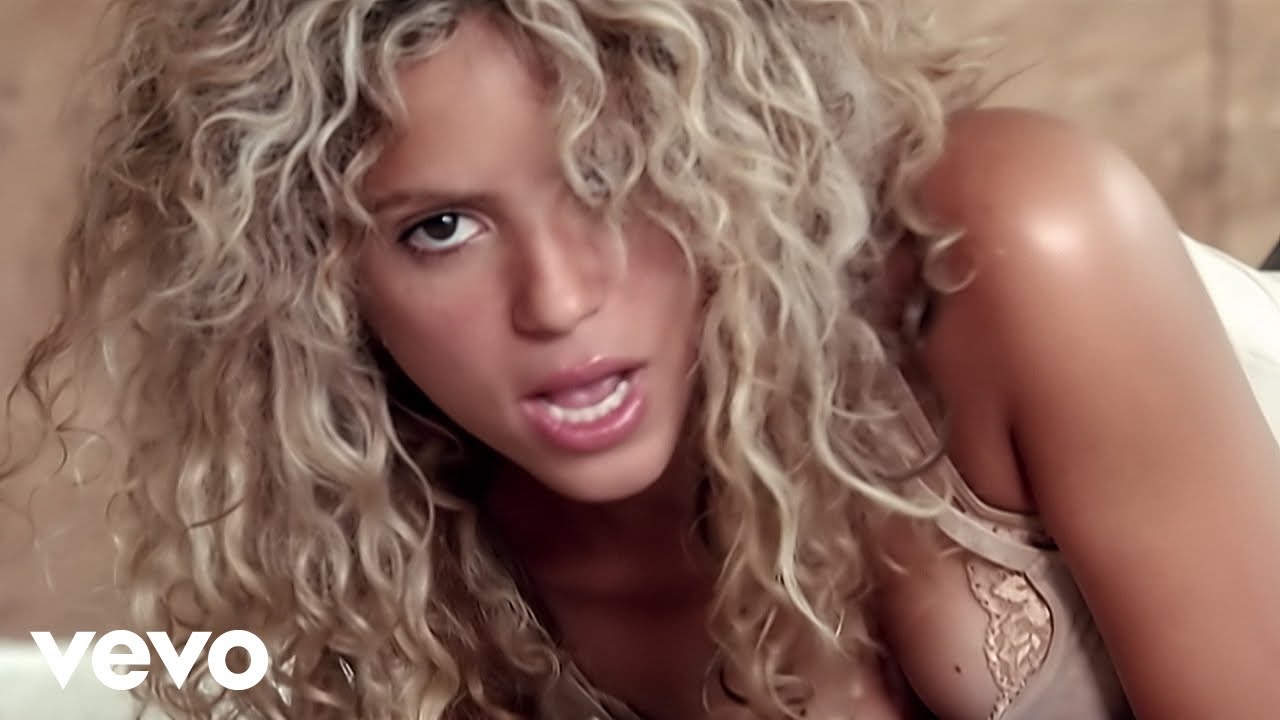 This reggaeton-influenced track suggests the old idea that the male animal has plenty of capacity for love—not too much, just more than enough. Shakira’s dialogue song doesn’t debate that, but it won’t accept it, either.

Man doesn’t live on bread alone
Nor do I live on excuses
We only learn from mistakes
And today I know my heart is yours
Better save that for yourself
Take that bone to some other dog
And let’s say goodbye.

The tone is strong, powerful, almost bitter. It’s almost like taking “She’s So Cold” by the Rolling Stones and flipping it around and sideways at the same time.

“Woman of Guantanamo” began in the verses of Cuban poet and revolutionary Jose Marti, and evolved into easy listening sentimentality at the hands of the Sandpipers. The opening verse, as taken from the poem, “Simple Verses” by Marti:

I am a sincere man
From where the palm tree grows,
And before dying I want
To share the verses of my soul.

Bandleader and songwriter Joseito Fernandez set the words to music circa 1929, and popularized it on the radio. In folksong tradition, he often improvised verses to reflect news of the day. Thirty years later, Pete Seeger took hold of the song, basing his arrangement on an adaptation by Julian Orbon and the performances by Hector Angulo, emphasizing its angle of peaceful protest:

And for the cruel one
Who would tear out this heart with which I live,
I do not cultivate nettles nor thistles
I cultivate a white rose.

The Sandpipers hit the international charts with their lush, Muzak version. They boiled it down to a man inspired to wax poetic thanks to a Guantanamo girl, leaving one final, protest lyric intact.

With the poor people of this earth,
I want to share my fate.
The streams of the mountains
Please me more than the sea.

Maybe they don’t write protest songs like they used to, but they’re still out. “Aalu Anday,” from the Pakistani band whose name means “brigade without honor,” takes satiric shots at everything Indian from religious right to politicians to conspiracy theories. But don’t let the lightweight sound fool you. The New York Times quoted Nadeem Farooq Paracha, a Karachi culture critic, as saying, “This band is offering an alternative narrative to the one this generation has grown up on, and provides a counter-narrative to establishmentarian and conservative notions of politics, history and society advocated by televangelists, conspiracy theorists and, of course, the right-wing electronic media.” That’s a heady take in spite of lead vocalist Ali Aftab Saeed’s view: “At the end of the day, we are just musicians who raised some questions.”

White sugar is sold in black lots.
Political macaws have hit the jackpot.
Why take Blackwater’s tension?
This is where from within attacks happen.
However much you roll out the dough,
It’s going to remain smaller than the stove.
Where you kill off every thief,
Who’s going to check the police’s mischief?

You’ve got to wonder if a plain-faced, chunky, South Korean singer would’ve had any chance to break into the global market before the advent of online videos and “going viral.” Sure, once upon a time going viral made for the stuff of elementary school propaganda films and the basis for Edgar Allen Poe stories. Now it means a biting commentary on Seoul’s swanky Gangnam neighborhood gets more play than an Apple press release. You know you’ve really gone viral when the Siri version hits YouTube.

And the lyrics? They appear lighter than light, popper than pop. But give Psy more credit than just the obvious satirizing of materialism. For example, here’s the opener:

A girl who is warm and human during the day.
A classy girl who knows how to enjoy the freedom of a cup of coffee.
A girl whose heart gets hotter when night comes.
A girl with that kind of twist.

Psy’s referring to Gangnam’s local babes notorious for slurping up Ramen lunches on the cheap so they can blow their bank accounts at chi-chi coffee houses. The video reflects other deceptions: a beach that’s really a playground, a dance party on a tour bus, etcetera. And then there’s the ever-popular refrain, as empty as the lives and aspirations reflected within the song: