When it comes to our hair, we have had a myriad of styles. Some have become fond memories and some were “cut” from the fashion scene even before they had a chance to grow into a ‘do that could withstand the test of time. The hairstyles below reflect the creativity of the human race in its never-ending drive to make a fashion statement, so with about much ado, here are the top 10 hairstyles.

As much a political statement as it was a hairstyle, the afro of the 1970’s was a symbol of race pride, progressive political views, and a “Black Is Beautiful” ideal. Also called “The Natural”, this refers to the fact that a true afro occurs in hair that is not chemically altered in any way by relaxing agents, straightening, etc. Which means that very few white folks can naturally attain an afro. Much to the dismay of many, because it is a truly fun hairdo. Films have poked fun, sure, but they poked more fun at the Blaxploitation

era of films more than the hairdo itself. And tell us that Beyonce didn’t look smokin’ with her Foxy Cleopatra ‘fro in the last Austin Powers movie.

Maybe it was a desire to overcome their wimpy male companions with their height, or maybe 1700’s Frenchwomen didn’t have enough to do, but the towering hairstyles that Marie Antoinette made popular defied both gravity and hygiene. With the cunning use of pads, pomade and many, many ornaments, these hairstyles were as much a work of art as a hairstyle. That, and the popularity of them created a whole new French profession – the hairstylist. Wigmakers beware!

The upside: hairstyles became a showplace for birdhouses, birdcages with real-live birds, and model ships.
The downside: the pomades were made with beef lard and bear grease, and because the hairstyles were so elaborate, women would keep them for weeks, attracting vermin of all sorts. Hence the term “rats nest”.

Though the women’s hairstyle was developed in the 1950’s, the hairstyle itself was born in much earlier times. Medieval times, in fact. Why exactly 1950’s hairdressers saw fit to copy Prince Valiant’s coiffure we’re not sure, but it sure did catch on and it’s here to stay. Though not always in a good way:

Apparently the new millennium brought on the pageboy for creepy dudes, though the bangs and length are making an appearance on the likes of Emilie De Raven and Sienna Miller. So, the pretty outweighs the creepy…for now.

Closely related: The Wedge, made popular by Dorothy Hamill and worn by many a wanna-be ice-skating teenager.

The video shows how to get the Amy Winehouse beehive hairdo

A more low-maintenance answer to the Marie Antoinette, beehives were popular in the 1950’s and 1960’s. Perhaps the most attractive version? Audrey Hepburn in Breakfast at Tiffany’s, who could rock any hairstyle and still remain beauty incarnate. A not so great incarnation? Love her as we do, Marge Simpson’s ‘do straddles the fence between the iconic TV housewife and something that Marie Antoinette and her buddies might have tried to accomplish. The upside for Marge? Animation eliminates the need for beef lard pomade, though we doubt Homer would have minded.

Our favorite mixed-up chanteuse, Amy Winehouse, has revived the Beehive, though we doubt that we could love her any more than our favorite pill-poppin’ momma, Patsy from Absolutely Fabulous. 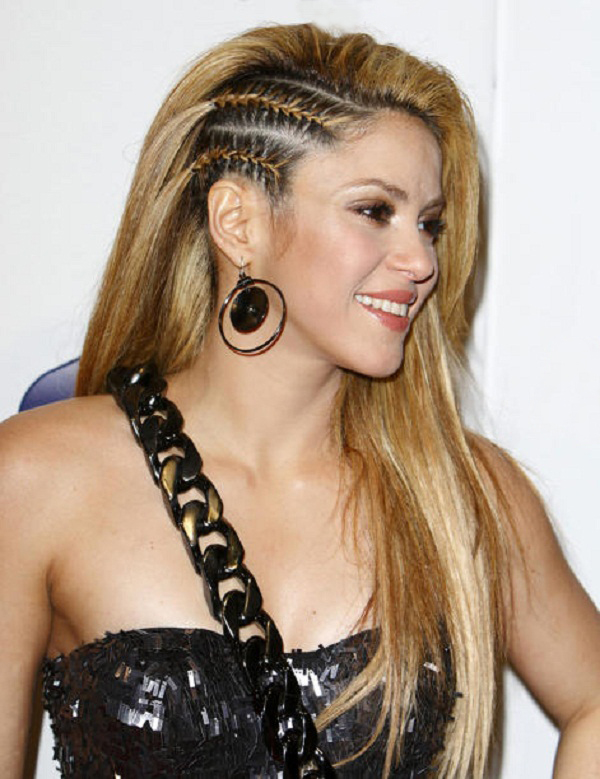 Just a little factoid for you…the Afro hairstyle was based loosely on what the ancient Egyptians called “Nubian wigs”, which were piled-up braids that resembled a halo of hair on the head. Cornrows take the same concept, but go the other way. Instead of a built-up hairdo with braids, cornrows are braids that are braided to the scalp and resemble (guess…) cornrows! They can be straight or in patterns, and they can be plain or have beads and cowry shells to decorate them.

Some notable cornrow-wearers: Cicely Tyson in East Side/West Side, Allen Iverson, Bo Derek in “10”, and a girl in the author’s first-year college dorm who had them braided too tight and ended up with three distinct bald spots on the top of her head. A cautionary tale if we ever heard one…

5. The Lady Godiva, also known as the Rapunzel There is something to be said for letting it just grow, baby. Long, looong hair evokes a spirit of freedom, of rebellion, or, in some cases, of extreme religious upbringing. Lady Godiva reportedly rode through the streets dressed only in her long locks (try not to shudder at the unsanitary implications of riding a horse bareback and NAKED). Rapunzel Rapunzel let down her long hair and snagged her prince. Crystal Gayle grew her hair to three inches above the floor…because she could. In modern times, super-long hair is not as super-long. Five or six inches below the shoulder is considered plenty long.

Dos: Do keep it natural. Hairspray and long tresses are not a great combo. Long hair should move. Do toss it around to distract every man in the room.
Don’ts: Don’t forget to wash and exfoliate your back. That is a mess of dead cells hanging back there, folks. 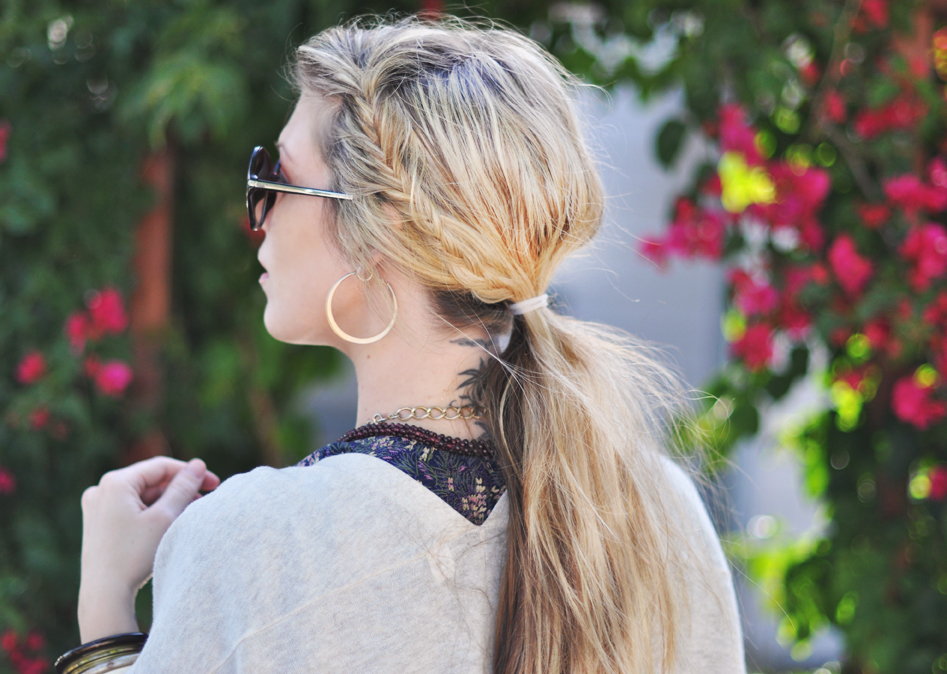 When that long hair gets too unruly, pull it back into the versatile and understated ponytail. The most casual and at the same time so easy to dress up, the ponytail will work for anybody with hair long enough to collect, gather, and fasten into one place on your head. Also, it’s one of the first hairstyles a girl learns to do herself, so it’s easy to do. It can be polished, messy, half up/half down, with bangs, without bangs, with long hair and with not-so-long hair.

The good: Almost every ponytail. It’s a very hard-to-mess-up hairstyle.

The bad: Side ponytails. Notice we said “almost”. With the right face shape, the right cut, and the right attitude, this can be one of the most striking hairstyles on a woman. Pretty much the polar opposite of the Lady Godiva (actually, the most extreme boy cut – The GI Jane or the Sinead is the polar opposite of the Lady Godiva), the Boy Cut is just what it sounds like. It can also be called a Pixie Cut, it’s when the hair is short short short all over. It can have a side part or no part at all. It can be the best looking hairdo or the worst looking hair nightmare. It all hinges on the three things listed above.

Good examples: Alyssa Milano, Emma Watson, Audrey Hepburn (of course)
Bad examples: Cameron Diaz – this was NOT a good look for her.

2. The Shag (aka the Farrah Fawcett…aka The Rachel)

Yep. You read that heading correctly. The famous Farrah Fawcett loopy, back-combed, teased and heavily hair-sprayed coif has the same humble beginnings as another “I need to have hair just like this celebrity” phenomenon. Known as “The Rachel”, the hairdo Jennifer Aniston sported in the second and third seasons of Friends hit the world like a tidal wave, just like “The Farrah” did in the seventies. This root hairstyle is The Shag. The Shag is a mid-length or short cut that has the intent of looking messy, with many different layers to create a textured look. Photo: BeautifulHairstyles.com

You can’t go wrong with a hairstyle inspired by Joan of Arc. This style was created in 1909 Paris by famous hairstylist Antoine, but didn’t become popular until the early 1920’s. The bobbing of a woman’s hair was quite controversial, and F. Scott Fitzgerald even went so far as to satirize the hubbub in “Bernice Bobs Her Hair”. Fast forward to the 1960’s and a fella by the name of Vidal Sassoon will bring the bob hairstyle back into the forefront. It’s a style that’s been around a long time, and a style that is here to stay. Variations on the theme do exist, as in the “Pob”, the asymmetrical bob sported by the artist formerly (and again recently) known as Posh Spice, but the basic bob is the hairstyle that works for the most face shapes and the most types of hair.