Halloween is one of the greatest days of the year. When you’re a kid, there’s nothing better than being encouraged to go out and stuff your face with as much candy as you can get your hands on. Halloween is fun for adults too, as handing out candy is a nostalgic reminder of our youth.

Unless, of course, your childhood Halloweens were bitter disappointments and you want to take it out on the next generation. Then you hand out one of these awful candies.

Editor’s Note: This is a repost of one of my favorite, funny lists. Seems appropriate since Halloween is a few days away. Enjoy. Tootsie Rolls are ostensibly chewable, but by the time they make it to your candy bag they’ve become a jaw destroying nightmare. The damage they do to your mouth isn’t worth their taste, which resembles chocolate in the sense that roadkill resembles filet mignon

The manufacturer’s website states that the recipe for Tootsie Rolls calls for part of the previous day’s batch to be included. The same philosophy must apply when they’re sold at Halloween, because every Tootsie Roll ever eaten tastes at least a year old.

Fun Halloween Fact: In World War II Tootsie Rolls were included in American field rations, as their toughness allowed them to survive a variety of environmental conditions. This proved invaluable to American soldiers who, in emergency situations, used the hardened candies to pelt Nazis to death.

Combining low quality artificial fruit flavors with the taste and texture of chalk, Smarties are what people buy when they want to give out candy but don’t want to go over their budget of seven cents and a handful of lint. Each piece costs a fraction of a penny, and kids would rather you give them that money than this “treat.” You could replace Smarties with Tums and people would think it was a new and improved variety.

Fun Halloween Fact: In Canada Smarties are called Rockets to avoid confusion with another candy. Thousands of Canadian children have lost interest in becoming aerospace engineers as a result. 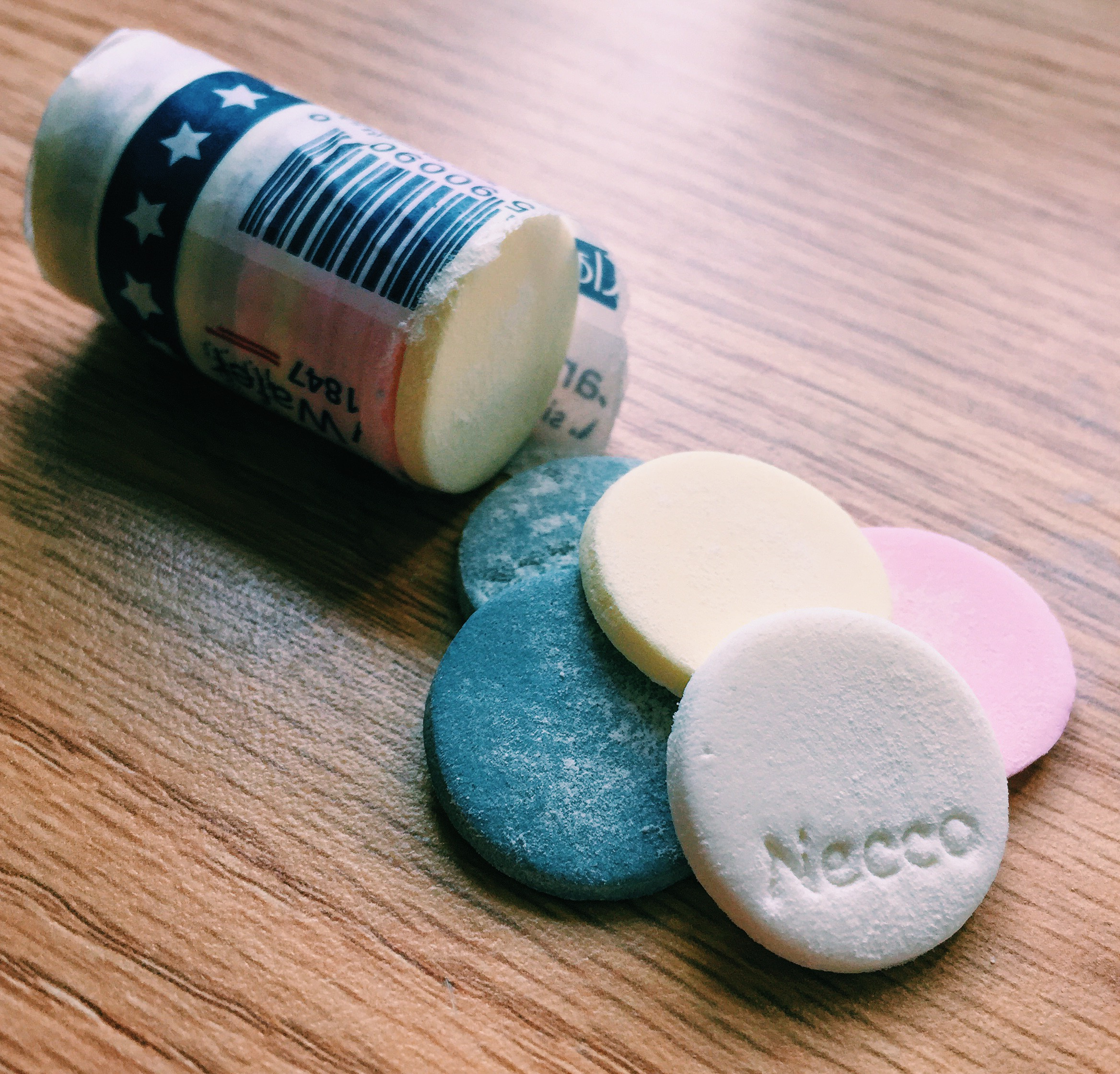 Necco Wafers were first made in 1847, and we’re pretty sure they’re still trying to sell the original batch. They’re from an era where a Halloween treat was getting to leave the coal mines an hour early, and their flavor reflects the fact that their target audience’s taste buds were permanently set to “dust.” Their label of “an American classic” couldn’t be less accurate if they were made from slaughtered bald eagles.

Fun Halloween Fact: In 2009 Necco introduced a new line of wafers featuring healthy all-natural ingredients and a muted color palate. This move was intended to eliminate whatever tiny sliver of joy the original candies might have contained. 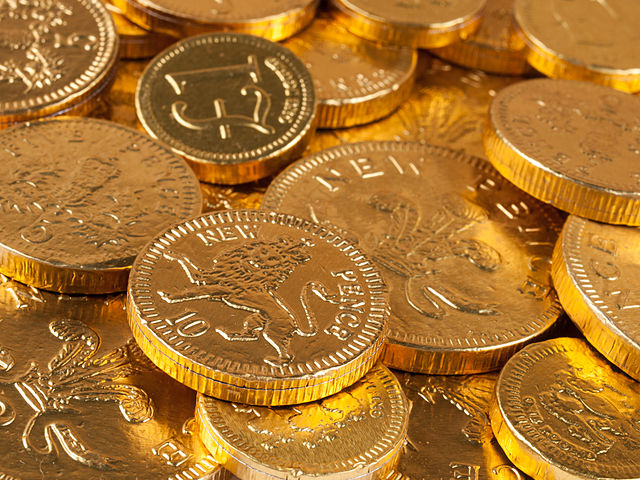 There’s something about the combination of chocolate and foil wrapping that turns an otherwise delicious food into a bitter disaster. Foil wrapped chocolate is disgusting, and it’s an especially disappointing candy because there’s no obvious reason why. Maybe the coins sit on store shelves for too long and don’t age well, or maybe their low cost is maintained by replacing the regular ingredients for chocolate with murdered drifters. We’ll never know.

Fun Halloween Fact: In 2008 a batch of chocolate coins were recalled after it was discovered they had been tainted with melamine. Authorities were worried that the dangerous industrial chemical would improve the taste of the coins to the point where children would become confused, their tiny brains unable to comprehend why their chocolate was suddenly edible. 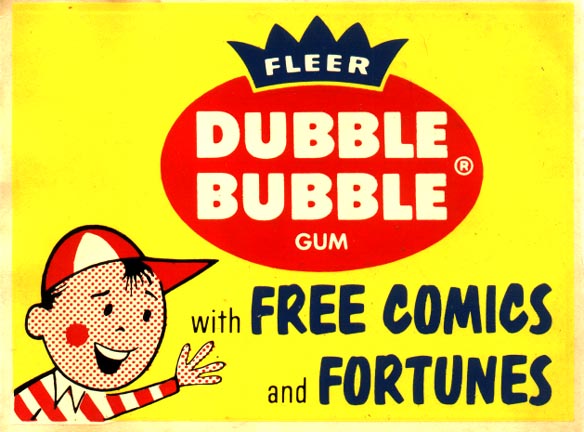 Gum on Halloween is already a dubious prospect, as every minute spent chewing is a minute not spent shoveling candy into your mouth. But you can always save packs of Extra for those gloomy post-Halloween days—not so with Dubble Bubble, which starts out as tough as concrete and soon replaces diamonds as the world’s hardest substance. Your reward for ruining your teeth on a piece is a scant few seconds of what can only be generously described as flavor, after which it becomes a tasteless, rubbery mass. It’s more pleasant to chew the wrapper.

Fun Halloween Fact: Dubble Bubble was invented by an accountant, and to this day the gum is made primarily from shredded accounts receivable statements. 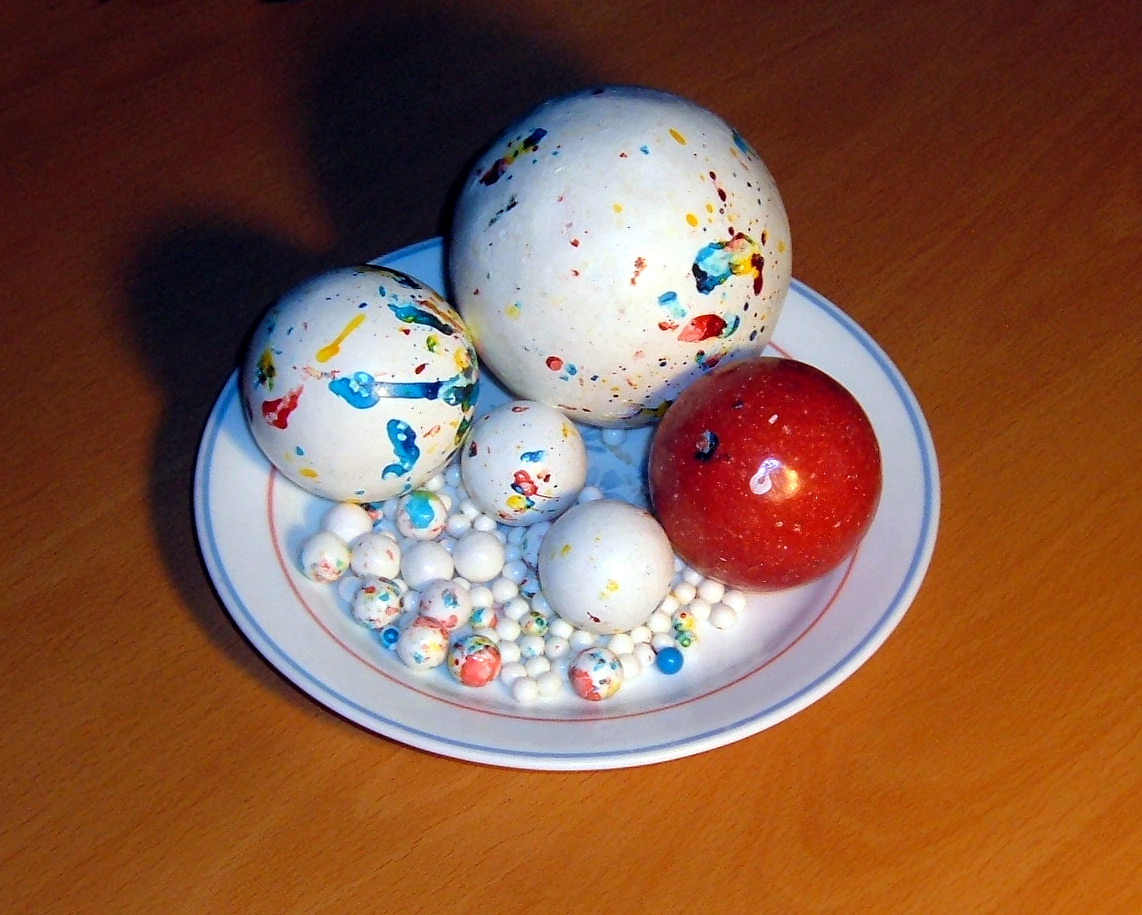 Jawbreakers suffer from the same flaw as gum—they take forever to eat. That would be okay if they tasted good, but their weak sugary flavor just doesn’t do it when you have piles of chocolate waiting. And let’s be honest—you thought the name was an exaggeration and bit down hard on one of these bad boys. Don’t be ashamed, we’ve all done it and we all have the chipped teeth to prove it. Kids don’t take a name like Jawbreaker as a warning, they take it as a challenge. Providing candy that encourages children to injure themselves is only a good idea if you plan on giving it away from an unmarked van.

Fun Halloween Fact: In 2003 a Jawbreaker that had been left out in the sun exploded, giving a nine year old girl minor burns. In the lawsuit that followed, the manufacturers admitted that Jawbreakers are intentionally designed to maim children. Every child has fallen for the twisted trap that is Good & Plenty. They look tasty—the pink is probably cherry flavored, but what could the white be? You scoop a handful into your mouth to find out, chomp down, and Bam! Black liquorice.

Black liquorice is candy in the sense that someone who commits a stabbing in a hospital is a surgeon. Studies have shown that nobody under the age of 80 likes black liquorice, which is why the only way to sell it is with a diabolical disguise. You know that urban legend about psychopaths hiding razor blades in Halloween candy? They’re actually hiding black liquorice, because kids would rather eat the razors.

Fun Halloween Fact: The pink candies are dyed with K-Carmine, which is produced by crushing female cochineals (insects). This is a terrible waste, as just eating the bugs would be tastier than eating Good & Plenty.

The niche market of candy that encourages cross-dressing consists largely of candy necklaces and ring pops. The former are part of the dreaded “tastes like chalk” family, while the latter turns into a sticky, disgusting mess the second you start eating one. Anything you touch the rest of the night becomes gooey and gross, and the cheap plastic scratches up your fingers to boot. To make matters worse, boys are mocked by their friends for wearing them, while you just know that the girls who get really into candy jewelry grow up to be harlots.

Fun Halloween Fact: Statisticians have observed a correlation between the increased production of candy necklaces and the increased number of gender reassignment surgeries.

2. Whatever Those Orange and Black Things Are Called 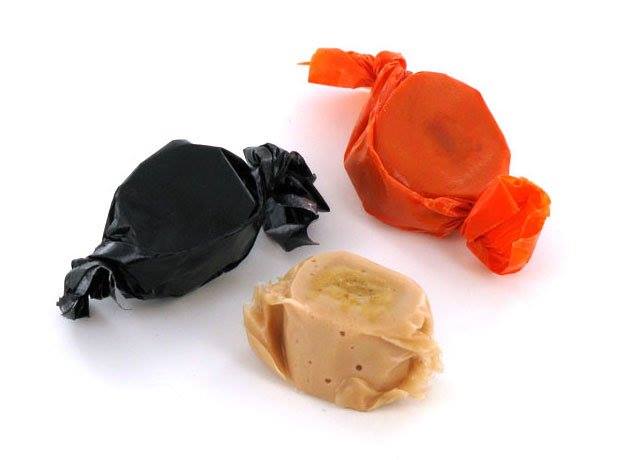 These rock-hard candies taste like a mixture of molasses and child abuse. Their manufacturer is so ashamed of them that nobody is even sure what they’re called, and rumor has it they’re only made in the dead of night in a hidden factory operated by the souls of the damned. Every adult who gives them out on Halloween turns into a bat and vanishes the next day. The moment a kid eats one is the moment their childhood ends.

Fun Halloween Fact: Intensive research has revealed that these candies do have a name, but it can only be pronounced if you’re a ten-tongued Lovecraftian horror.

1. Anything That Isn’t Candy

Apples, toothbrushes, pennies, the condoms that one creepy guy gave out… nothing is worse than getting something other than candy on candy day. Yeah, it’s important to get kids eating fruit and brushing their teeth, but come on. It’s Halloween. People who give out toothbrushes miss the point of the holiday worse than people on the Internet miss the point of Guy Fawkes Day.

The worst non-candy item of all is pencils. Anyone who hands out a school supply is saying, “Hey, kid, you know this magical day where you dress up in a cool costume, stay up late with your friends and get free candy from all sorts of nice people? It’s about to end and you’re going back to school tomorrow. Screw you.”

Fun Halloween Fact: Anyone who gives out toothpaste on Halloween is dead inside.