Oceans are such vast and often overwhelming subjects. Because of their sheer scope in size, the discussions that are often had regarding seas and different discoveries within it, can be both mind boggling and intriguing. There are enormous mysteries in the depths of the oceans. While some of these phenomena have been explained by analysts and experts, there are still some interesting occurrences underwater that can’t really be rationalized. Sailors from all around the world have witnessed and experienced a variety of incredible ocean phenomena. Below is a list of the top 10. 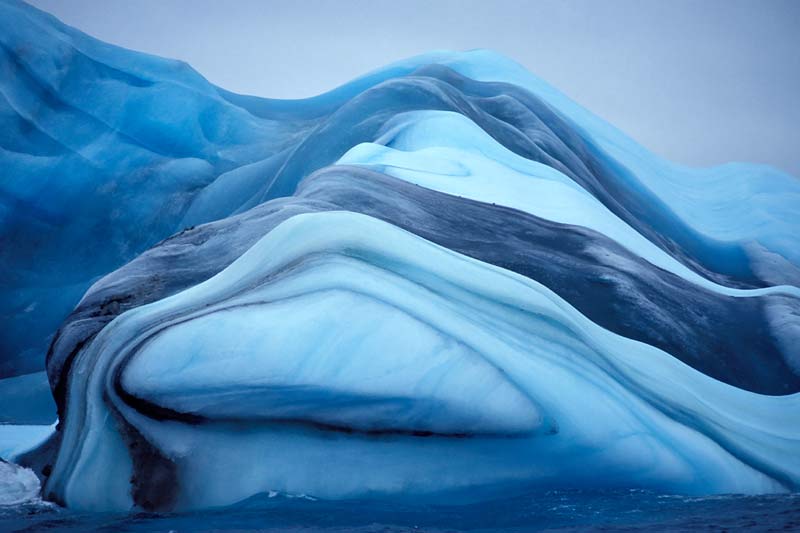 Depending on which ocean and what part of the world it is in, the temperature and general characteristics of it will vary. This next interesting phenomenon deals with the cold, icy waters near Antarctica. There is something that occurs called striped icebergs, certain Arctic blues and whites mend together and as the water melts and then refreezes and creates icebergs, things like dirt and other particles get caught in between the layers. This creates cool looking multicolored stripes along the surface of the iceberg. So not all icebergs are big blobs of white or clear ice, some of them have an interesting flare and pop of color. Almost as if nature is decorating icebergs all on its own. 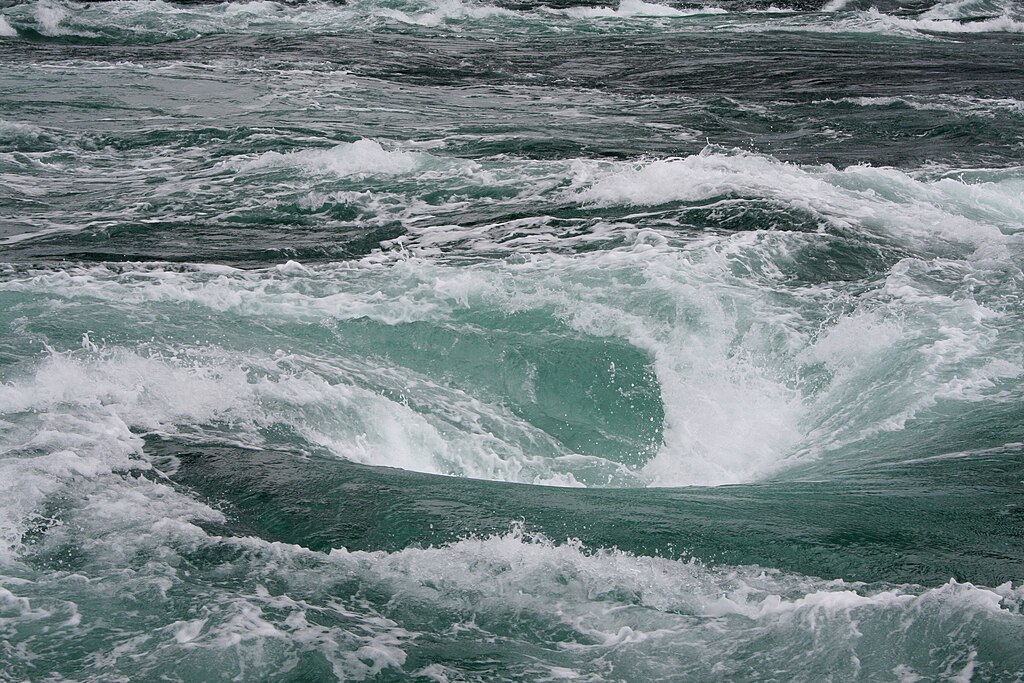 With a name like maelstrom, it’s hard to ignore the way that this phenomenon kind of warns us about it’s dangerous ways. Originally introduced to the world by author Edgar Allan Poe, the word maelstrom actually means “crushing current” which is very accurate. It is essentially a powerful and vast whirlpool that has a downdraft that would quickly suck up whatever was in the immediate vicinity. The weather is something that is a huge determination of the force and strength of a maelstrom. There are urban legends that insist that a maelstrom will immediately lead you to the bottom of the ocean, but those are dismantled by scientists. Who would even want to go to the bottom of the middle of the ocean anyway? Seems like a scary place. 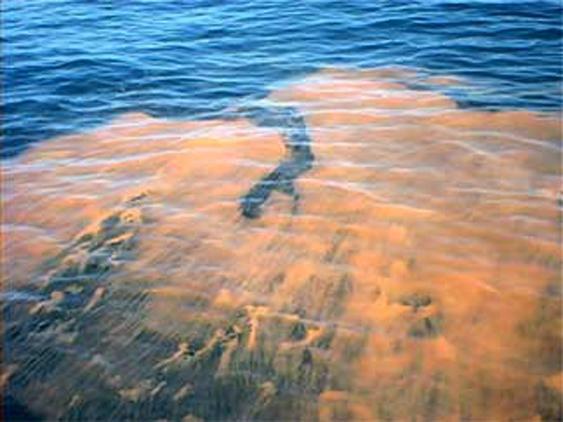 This particular phenomenon has the ability to be visually stunning. The strong and vivid colors of red and orange that lace the tides as they come in are rather spectacular to witness. However, its beauty should not be coveted too highly because what’s causing it is actually very dangerous. Harmful algal blooms, which are colonies of different type of algae, can grow so exponentially, that they start producing toxic and harmful chemicals that are bad for marine mammals, fish, birds and people. One of the most notorious occurrences of this phenomenon takes place every summer along the Florida Gulf Coast.

This specific phenomenon is really a vision. When a brinicle is fully formed it looks almost like an angular crystal beneath water, it’s really beautiful. It’s formed when water rich in salt leaks out of sea ice, then it proceeds to sink into the sea and creates a unique ice type figure. Because of the low temperature that is required for these brinicles to form, they only occur in the frigid oceanic waters around the South and North poles. Brincles can be incredibly harmful and damaging to the oceanic life that it comes into contact with. Starfish, fish and even algae are either cut or frozen solid when they are met with the brinicle. 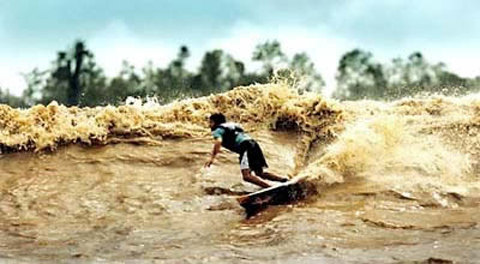 Because the ocean and its condition are so intrinsically tied to the weather, certain phenomenon can only be seen during specific seasons. That is the case with this next phenomenon. Only twice a year can the longest wave on earth be seen. Between the months of February and March, the Atlantic sea water cascades up the Amazon river, which is located in Brazil. When this happens, it creates the longest wave on the Earth. This phenomenon is called Pororoca. It is actually caused when the tide meets the mouth of the river. The waves that are generated from this are up to 12 feet high. It is also reported that the wave can be heard almost 30 minutes before it arrives on land and has the power to destroy local houses, tress and different kinds of animals. These delicate, lovely looking things are definitely a phenomenon that most people don’t even know exist. The frost flowers are usually found forming on young sea ice, in the colder seas. They usually only form in cold conditions, where very little wind blows. The ice clusters will usually grow around 4 centimeters in diameter and often take on the shape of a flower. These frost flowers are very high in salt content, which also lends itself to the crystalized appearance that they take on. They also release this salinity into the air wherever there are big clusters of these flowers in a certain part of the sea. So not only can the sea create and sustain oceanic life, but it also goes through changes and creates literal art in many places that we just don’t see. Pretty fascinating stuff

Most of us can tell when a wave is starting to form, we can either hear or see certain signs that let us now that a wave is about to break. But not all waves exist in this way. There is something called a rogue wave that essentially sometimes forms almost out of thin air and gives no warning of its occurrence. These waves usually occurs far from any land and are always of the colossal variety, they can reach up to 80 feet in height. They sound like something incredibly scary our of a horrible sailor’s stories at sea. Something mysterious, ominous, deep and dark, something no one has any way of adequately predicting.  Seems insane that a wall of water that large could come barreling down on the ships in its midst without any proper warning. The thought of a rogue wave will definitely have you thinking differently about being in the middle of the ocean, even if you are on a ship or boat.

3. The Meeting of Baltic and North Seas

This seems almost picturesque, when the Baltic Sea and the North Sea meet one another, but yet don’t mix. Even the differing colors of both waters, as they merge, is pretty spectacular and seems almost impossible. This oceanic phenomenon is widely debated. The point of convergence takes place in the province of Skagen, which is located in the country of Denmark. Because of the different rates of densities in both of the seas’ waters, they both remain on each prospective side and do not mix or conform to one another. It is also noted that the meeting of these two oceans is mentioned in the religious text, the Koran.

This phenomenon is definitely one of the coolest, and the one that you’d likely just die to catch on camera. The existence of bioluminescence happens when the light that is emitted from a living organism combines with atmospheric oxygen and the chemical reaction of light energy is the result. This can make it seem as if entire portions of the ocean are lit up. It almost looks like huge light beams were submerged in the water and makes the affected areas look almost as if they are glowing in the dark. This is obviously best experienced at night, because the glow of the light from under the water’s surface is all the more pointed.

This takes place in the Indian Ocean, and is similar to the existence of bioluminescence that happens in various parts of oceanic water. It is actually a bacterial action that makes a large amount of the sea water turn to a blue color, which then appears to be a white milky color to the human eye. This phenomenon actually has some history and roots, as it has been documented for over four centuries. So scientific and interesting oceanic phenomena have not just taken place in recent centuries, but they span back into the ancient history of this earth.  This particular occurrence is so vast and prominent, that it can be seen all the way from space. Now that’s impressive!