Whether you believe its God’s word, a historical relic, or a load of hogwash, there’s no doubt that the Bible contains some interesting stuff. Like monsters, for example. All sorts of terrible creatures and mythical beasts can be found in its pages. Like…

In Job, one of the Bible’s oldest books, the Behemoth is described as a gigantic, powerful creature that can only be tamed by God. His tail is so large that it ‘moves like a cedar.’ This description has led some Creationists to claim that Behemoth was in fact a Biblical-era dinosaur. However, carbon dating aside, the creature is mentioned as having a navel, which would rule it out as an egg-hatched lizard. In Jewish tradition, the Behemoth is a primal earth-monster, a symbol of chaos. Less imaginative scholars have suggested that the Behemoth is simply a poetic description of a real giant creature, like a hippopotamus.

If there’s one place that’s good for finding Biblical monsters, it’s the book of Revelation. No one agrees on whether this book of ‘visions’ contains descriptions of future events, or symbolic representations of the past, but everyone agrees that it sure has a lot of monsters. The ‘First Beast’ of Revelation, so called because it’s mentioned first and no one came up with a better name, is a monster with seven heads and ten horns that rises from the ocean. It also features the feet of a bear, the mouth of a lion, and the general appearance of a leopard. Theologians and Biblical scholars have interpreted this beast as symbolizing everything from the Papacy to the 1st Century Roman Emperor Nero. 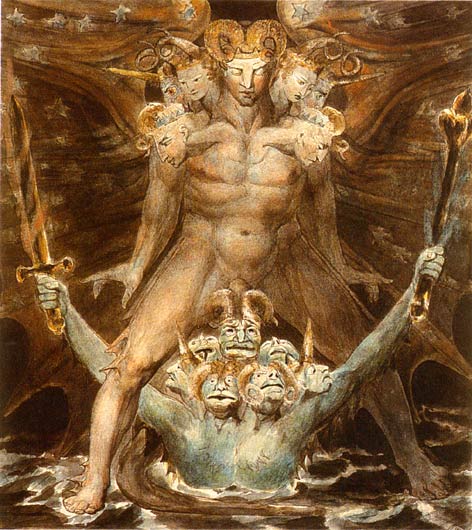 This beast, which unsurprisingly follows the first, rises up out of the earth. It has two horns and speaks ‘like a dragon.’ Personally, I’ve never heard a dragon speak, but I imagine it must be scary. This guy’s job is to perform false miracles that encourage people to worship the first beast. It also allows the first beast to kill anyone who doesn’t worship it. Damn. Once again, interpretations are varied: it’s been described as a symbol for everything from the prophet Mohammed to the modern United States.

Unicorns are mentioned nine times in the King James Bible, a medieval translation that remains popular to this day: ‘Will the unicorn be willing to serve thee, or abide by thy crib? Canst thou bind the unicorn with band in the furrow?’ the book asks. Unfortunately, linguists have since discovered that the Hebrew word re’em, translated as ‘unicorn’ here, actually refers to the aurochs, a distant ancestor of the modern cow which went extinct in the 17th century. Which is a shame, because unicorns are far more interesting than slightly-larger-than-usual cows.

In fact, a whole bunch of ‘mythical creatures’ in the King James Bible are simply additions by medieval translators who were more interested in being poetic than in making sure their creatures existed. The cockatrice, a rooster-headed dragon mentioned in the book of Isaiah, has been scaled down in more recent translations to ‘viper.’ Lilith, a female demon, has been downgraded to ‘screech owl’, and mentions of satyrs (half-man, half-goat creatures) have been changed to ‘goats.’ More linguistically accurate, maybe, but nowhere near as fun.

These guys are ruled by Abaddon, an angel of the bottomless pit whose name means ‘Destroyer.’ Because they appear in Revelation, they’re of course not satisfied with being normal locusts: instead, they resemble war horses, have the stinging tails of scorpions, the faces of men, long hair like a woman’s, and wear crowns of gold and armored breastplates. Their scorpion’s tails are used to sting their victims, an experience that’s apparently so painful that ‘men shall seek death, and shall not find it.’ Ouch.

This epic army also appears in the visions of Revelation, although they’re not to be confused with the far more famous Four Horsemen, the guys who symbolize Death, War, Famine and Pestilence. But these riders aren’t to be messed with, either. Their horses have the heads of lions, tails like serpents, and spit smoke, fire and brimstone out of their mouths. Eventually, they’re responsible for the deaths of a third of all mankind. The horsemen army is led by four fallen angels, which is never good.

Like Revelation, the book of Daniel is largely made up of visions which are meant to symbolize real-world events. In one of these visions, Daniel sees no less than four monsters emerge from the sea: one is a lion with eagle’s wings, which is then transformed into a human-like creature and has its wings plucked off; one is a bear-like creature who is told to gorge himself on flesh; one looks like a leopard with four wings and four heads, and one has iron teeth and ten horns, with which it destroys the whole earth. And believe it or not, the vision actually gets weirder from there. These beasts are often said to represent four different nations that existed in Daniel’s day.

Another beast from Revelation, the great Dragon is described as having seven heads and ten horns (those are very popular in Revelation.) He also has a tail capable of sweeping a third of the stars out of the sky. The author later identifies this dragon as Satan himself, who fights against God’s angels and is cast into hell.

The King James Bible refers to ‘dragons’ elsewhere, but like its mentions of ‘unicorns,’ these are mistranslated. Most modern versions of the Bible identify them as jackals, hyenas, or snakes.

Much confusion surrounds the Nephilim, or ‘fallen ones,’ who pop up in Genesis and are described only as the offspring of ‘sons of god’ and ‘daughters of men.’ Some have interpreted this to mean the offspring of angels and human women. Another, less interesting explanation is that the passage refers to the mixing of two human tribes: ‘godly’ people descended from the good-guy Seth and the somewhat less godly descendants of bad-guy Cain.  If that seems too dull, don’t worry: there’s also a strong Internet community that believes that the Nephilim were in fact extraterrestrials. The second of the great monsters described in the book of Job, Leviathan is a massive sea-monster who’s impervious to human weapons, breathes fire, and emits smoke from his nostrils. Leviathan is probably related to another Ancient Near Eastern monster called Lotan, a seven-headed giant serpent who represented primeval chaos. As with many other Biblical creatures, there are some less exciting theories that insist that Leviathan is just a poetic depiction of a crocodile, although last time I checked crocodiles did not breathe fire.