With one of the world’s most unique environments and ecosystems, is it any wonder that Australia is full of strange and mythical creatures?  While they may not be as famous as their European or Asian counterparts, Australia has their fare share of cryptids, creatures from folklore, and mythological beasts.  Many are derived from Aboriginal culture while others are more modern in origin.  But whatever their source, they represent some of the strangest, and most fascinating, legendary creatures in the world.  So here are ten of Australia’s most fantastic and incredible mythical creatures, in alphabetic order.

A word of caution: many of these creatures are derived from the traditions of Aboriginal Dreamtime.  To understand them, the reader must have a decent understanding of what the Aboriginal Dreamtime is.  The only problem is that it can be quite difficult to understand.  So here’s a quote from Peter Weir’s The Last Wave (1977) to help sum it up:

Aboriginals believe in two forms of time; two parallel streams of activity. One is the daily objective activity, the other is an infinite spiritual cycle called the ‘dreamtime’, more real than reality itself. Whatever happens in the dreamtime establishes the values, symbols, and laws of Aboriginal society. It was believed that some people of unusual spiritual powers had contact with the dreamtime.

Basically, the Dreamtime is a sacred era of time in Australian Aboriginal mythology.  It is a kind of “time before time” wherein the universe was created, mankind was created, and the Creators laid down the rules for how humans should interact with themselves and their environments.  During the Dreamtime, the Ancestor Spirits came to earth and gave birth to the land, plants, animals, and humans.  Afterwards they turned into other objects, such as animals and geologic locations such as hills.  If you are still confused, the topic of the Aboriginal Dreamtime is further discussed and detailed here on the internet. 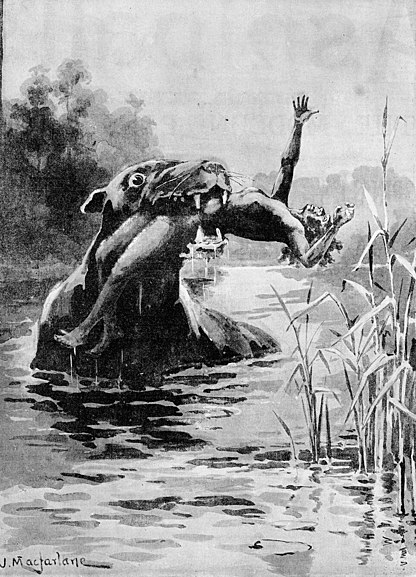 One of the most famous Australian monsters is the Bunyip, a creature that lives in or near bodies of water such as creeks, pools, and swamps.  There are supposedly as many as nine regional variations of bunyips scattered throughout Aboriginal Australia.  Because it is so widely known in so many different cultures, there is no real consensus concerning what a bunyip looks like.  But some common characteristics include tusks, flippers, and a horse-like tail.  It is believed that they come out at night to feast on animals, young children, and women.  It supposedly makes a loud bellow when approached.  It is sometimes argued that they harbor supernatural powers.  Originally, they were punishing spirits derived from the Aboriginal Dreamtime.  But today they have been toned down and are included in literature for children and even make appearances in television commercials.  There is a long list of supposed sightings of bunyips.  Some of the most recent and concentrated sightings were during the 1930s in the midst of the Depression.  One possible theory for the existence of the bunyip is that they are diprotodon, which went extinct about 20,000 years ago. 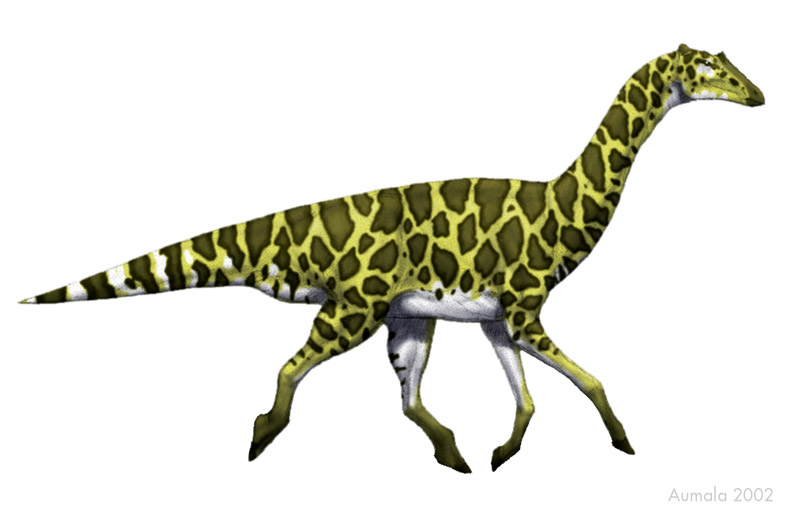 The best description of a drop bear is to liken them to giant carnivorous koalas.  They are said to live in the tops of eucalyptus and gum trees and hunt by dropping from trees onto the heads of their victims, knocking them unconscious, and then devouring them.  They are equipped with sharp teeth and razor-like claws.  It is said that they prefer to hunt at night and are not afraid of attacking creatures that are much larger than them.  In all likeliness, they are fake creatures that were invented with the sole purpose of scaring tourists and outsiders.  Children are frequently told stories of the deadly koala cousins and how they should avoid them.  There are some utterly absurd methods of deterring them, like spreading toothpaste or vegemite behind your ears and your neck.  Although the best method of protecting oneself from a drop bear attack is to hold a screwdriver above one’s head.  If a drop bear attacks, it will accidentally impale itself on the tool.  Campers beware!  The drop bears are out to get you! In New South Wales lies the Hawkesbury River, home to one of Australia’s strangest cryptids.  The beast, known simply as the Hawkesbury River Monster, is a kind of aquatic lizard, much like the Loch Ness Monster of Scotland.  Descriptions of the creature liken it to the prehistoric plesiosaur, extinct for 70 million years.  Sightings report that it is between 7 and 24 meters long.  It supposedly has two sets of flippers and a lengthy, snakelike neck and head.  The monster was first heard of by settlers in the 1800s, although there is Aboriginal rock art over 3-4000 years old in the area that describes the creature.  The settlers were told stories by the Aboriginals of woman and children being attacked by the moolyewonk or mirreeular, both of them Aboriginal names for the monster that lurks in the river.  Much like its Scottish cousin, the Hawkesbury River Monster has gained significant attention from the scientific world.  Many hunters and crytozoologists have spent decades trying to locate and/or catch the monster.  There have been hundreds of reported sightings, so the odds are the monster hunters will be scouring the area for many years to come.

Deep in the Murray River of South Australia lurks a terrible race of creatures known as the muldjewangk.  Details on the creature vary.  Some say that they are a race of merfolk.  Others say that it is a single giant monster.  But one thing is constant: you don’t want to mess with them.  Supposedly hiding under clumps of floating seaweed, the muldjewangk destroy fishing nets and disturb those who are foolish enough to enter their territory.  Though some local elders claim that the muldjewangk no longer exist, they still thrive in stories told to naughty children to keep them from playing by the river after dark.

The belief in the Rainbow Snake, a personification of fertility, increase (richness in propagation of plants and animals) and rain, is common throughout Australia. It is a creator of human beings, having life-giving powers that send conception spirits to all the waterholes. It is responsible for regenerating rains, and also for storms and floods when it acts as an agent of punishment against those who transgress the law or upset it in any way. 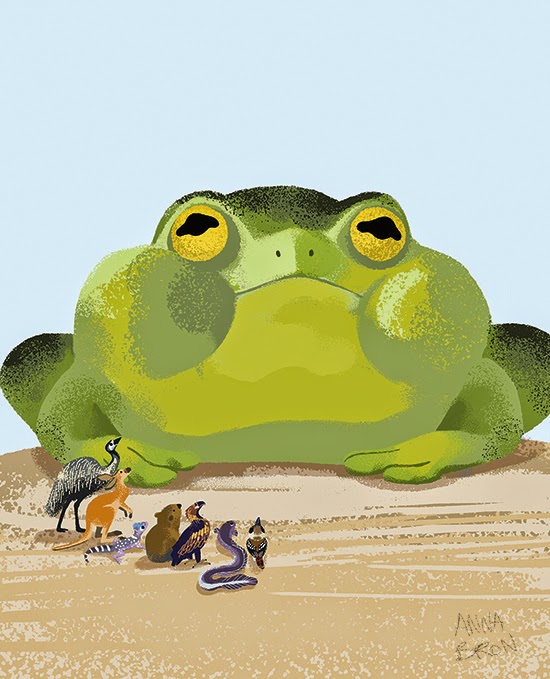 The Tiddalik is a character in Aboriginal Dreamtime mythology.  While not a Creator Being like the Dirawong and the Rainbow Serpent, the Tiddalik still plays an important role in Aboriginal folklore.  Although tales of the Tiddalik are widespread, they actually are all derived from the Aboriginal people of South Gippsland, Victoria.  The Tiddalik is a giant Water-holding Frog that once drank all of the world’s fresh water.  When everything began to die of thirst, the other creatures devised a plan to make Tiddalik laugh, thereby releasing all of the water in his mouth.  Many creatures tried to make him laugh, but all failed until Nabunum the eel danced and twisted himself into knots before him.  Laughing, Tiddalik released the water, refilling the world’s lakes, swamps, and rivers.  While this restored water to the world, it also had the adverse effect of causing a massive environmental disaster.  The ensuing flood resulted in many creatures drowning and being stranded on different islands.  In modern times, the story has been cleaned up so as to give it a happy ending.  The Tiddalik has gone on to transcend its Aboriginal roots by becoming a popular character in children’s books.

The last Dreamtime creature to appear on this list, the Wagyl is a snakelike Creator Being.  Don’t confuse it with the Rainbow Serpent for they are two different creatures.  While the Rainbow Serpent created the universe and humans, the Wagyl was assigned with creating and protecting rivers, lakes, springs, and wildlife.  Much like the Dirawong, the Wagyl is believed to have a physical body here on earth.  The Wagyl’s body is made up of the Darling Scarp, a low escarpment to the east of the Swan Coastal Plain and Perth, Western Australia.  It is said that as the Wagyl slithered over the land, he carved out the paths of rivers.  Whenever he stopped to rest, his body created bays and lakes.  His scraped off scales become forests and woodlands while his droppings became piles of rocks.  Strongly associated with rivers, the Wagyl is said to be personally responsible for the creation of the Swan and Canning Rivers and the other waterways around Perth and south-west Western Australia.  The Noongar people believe that they were assigned by the Wagyl as the guardians of the land. 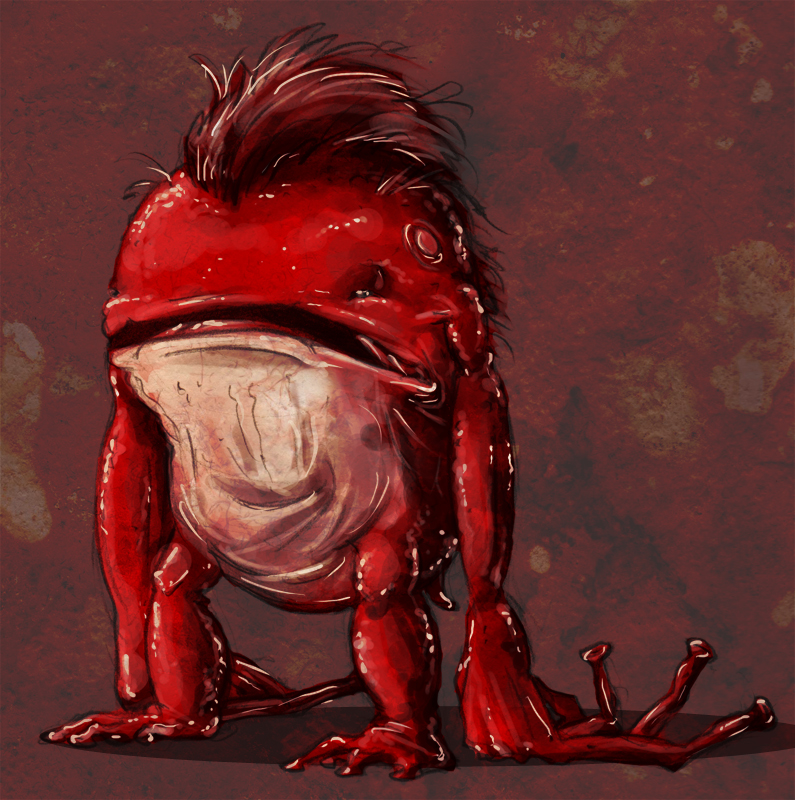 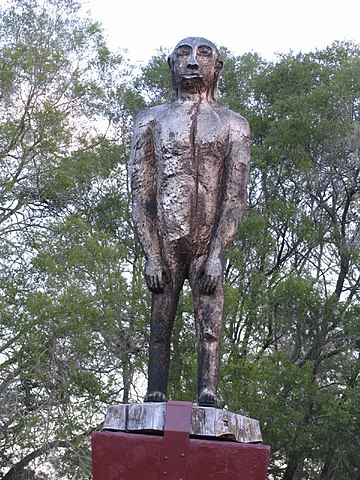 The yowie is a hominid cryptid in the same tradition of the North American Bigfoot and the Himalayan Yeti. The first known recorded account of the yowie appears as early as 1876, but they have apparently been a part of Aboriginal folklore since a much earlier time. They can stand up to six or seven feet tall with bodies covered in black or brown fur.  Although they are bipedal creatures, they have been reported as running on all fours.  They are most commonly reported in New South Wales, the Gold Coast of Queensland, and in the bush country of the Moehau Range.  There have even been reports of sightings in the North Auckland and West Coast areas of New Zealand.  They have been sighted as recently as 1997 when a woman living in the Tanimi Desert was awoken at 3 a.m. by a seven foot tall creature covered in hair.  The police discovered gigantic footprints and a shredded irrigation pipe on the scene.  There are various theories concerning the truth about the yowie.  One of the most popular was put forward by self-proclaimed archeo-cryptozoologist Rex Gilroy.  Gilroy argues that the yowie may be the remnants of an extinct ape species or even a less evolved version of homo sapiens.