Oscar Wilde was an Irish playwright, poet, writer, and wit who was an integral part of the fin de siècle group of artists who made up the Aesthetic movement of the late nineteenth century.  As a young man, he attended Trinity College in Dublin, and then applied for, and won, a demyship at Magdalen College at Oxford University.  There, he became a freemason, even though he was fascinated with Catholicism.  It was at Magdalen College that Wilde came into his own, reading, writing, wearing his hair long, and refusing to conform to social norms.  He decorated his rooms lavishly and entertained visitors almost daily.

In his third year at Magdalen, Wilde met Walter Pater, an influential player in the Aesthetic Movement.  Pater helped Wilde form some of his own personal philosophical tenants, and Wilde lauded him in The Critic as Artist.  Here we take a look at some of the best quotes by one of the most quotable wits of the 19th century on this, the anniversary of his death.  As we explore the quotes, we learn a little more about this charming but excessive individual.

10. “A little sincerity is a dangerous thing, and a great deal of it is absolutely fatal.”

– from The Critic as Artist 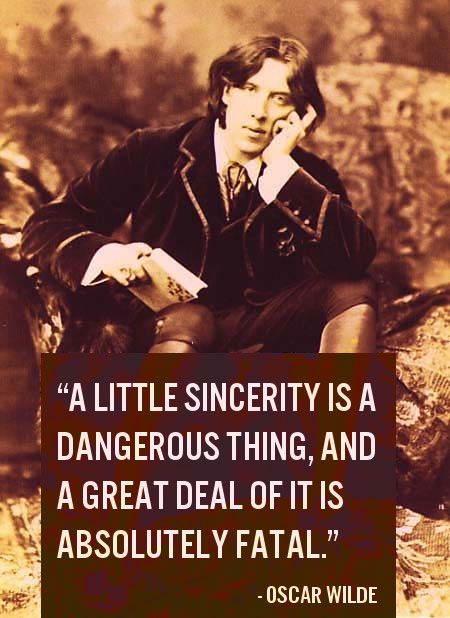 In the essay The Critic as Artist, Oscar Wilde set out to present the aesthetic philosophy in a dialog between two characters – Gilbert and Ernest.  Gilbert tells Ernest that basically true art comes from criticism – that critical thought is guided by the soul as well as the aesthetic sense.  Gilbert also says, “The public is wonderfully tolerant.  It forgives everything except genius.”  Wilde knew he was ahead of his time, and he certainly did suffer for his lifestyle

, if not for his genius.

9. “The only way to get rid of temptation is to yield to it.”

– from The Picture of Dorian Gray 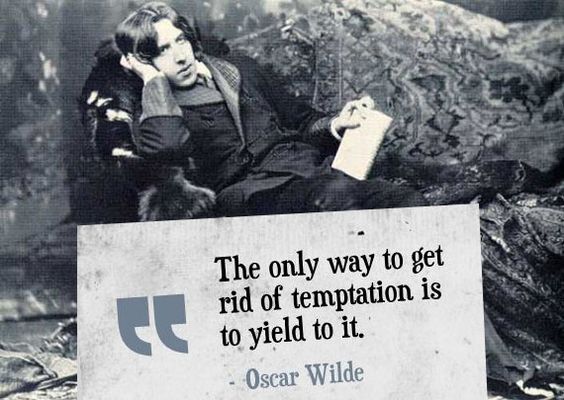 The Picture of Dorian Gray was Wilde’s only published novel.  The title character, influenced by Lord Henry Wooton, chooses a life of hedonism, and winds up trading his soul for eternal beauty – instead of aging, the portrait that Basil Hallward painted of Dorian would age instead.  Dorian goes on to live a life of debauchery, the only evidence of which is displayed on the ever-corrupting painting that stays hidden behind a curtain.  While the novel garnered mostly negative criticism upon publication in 1890, it has gone on to be analyzed and glorified in literary circles as a commentary on influence, responsibility (or lack there of) and the duplicity of the aesthetic movement with its desire to break societal norms, all the while still concerned with Victorian perception and reputation.  This is something that Wilde would experience firsthand.

8. “All great ideas are dangerous.”

De Profundis is a letter written at the end of Wilde’s imprisonment for “improper acts.”  The imprisonment was the result of Wilde’s intimate relationship with a young aristocrat named Lord Alfred Douglas.  Douglas’s father was the Marquess of Queensberry, and he was staunchly opposed to his son’s association with Wilde, who was unapologetic about his lifestyle, and his choice to keep company with young, attractive men.  Wilde and Douglas began their association in 1892, and by 1895 Wilde had seen some success with the plays The Importance of Being Ernest and An Ideal Husband.  The Marquess began to harass Wilde publicly, accusing him of sodomy, so Wilde sued him for libel.  The tables turned, and Wilde was sent to prison for “gross indecency with other men.”  The trial was highly sensationalized, with Wilde sentenced to two years imprisonment, with hard labor.

The letter in question was not actually published until Wilde had been dead for five years.  It consists of two main parts – the first is a retelling of Wilde and Douglas’s relationship, and the second is an account of Wilde’s spiritual development. 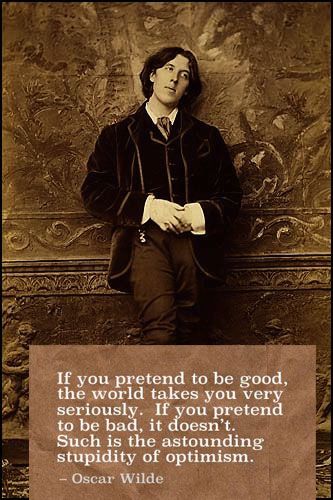 Lady Windermere’s Fan was a satire that follows Lady Windermere, her suspicion that her husband is unfaithful, her confrontation of said husband, who invites a woman to Lady Windermere’s birthday party, Lady Windermere’s overreaction  to this by almost taking up with a lover, and the discovery that the woman she suspected her husband was cheating on her with was really her mother.  Confusing?  Yes.  But then, so was Wilde’s own life.  He married Constance Lloyd in 1884, fathered two children by her, despite his preference for the company of men.  Constance stayed married to Wilde, but changed her name and the names of her sons to Holland to remove them from the scandal surrounding Wilde’s imprisonment.  She died two years before Oscar did, because of complications from a fall.

6. “We are all in the gutter, but some of us are looking at the stars.” 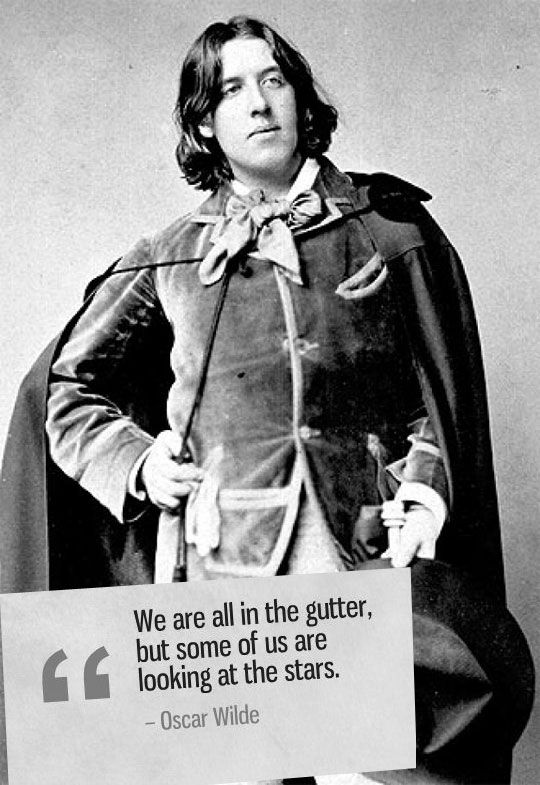 This is one of the most famous Oscar Wilde quotes.  It is spoken by Lord Darlington, who has a great admiration for Lady Windermere, much to her chagrin, though she later decides to have an affair with him.  It doesn’t happen, and she and her husband end up reconciling.  This quote shows a bit of humility, when Wilde felt anything but about the play.  In fact, he made a rather notorious speech at the premiere of the play, wherein he congratulated the audience on their “performance” in watching and reacting to the play.

– from the prologue of The Picture of Dorian Gray 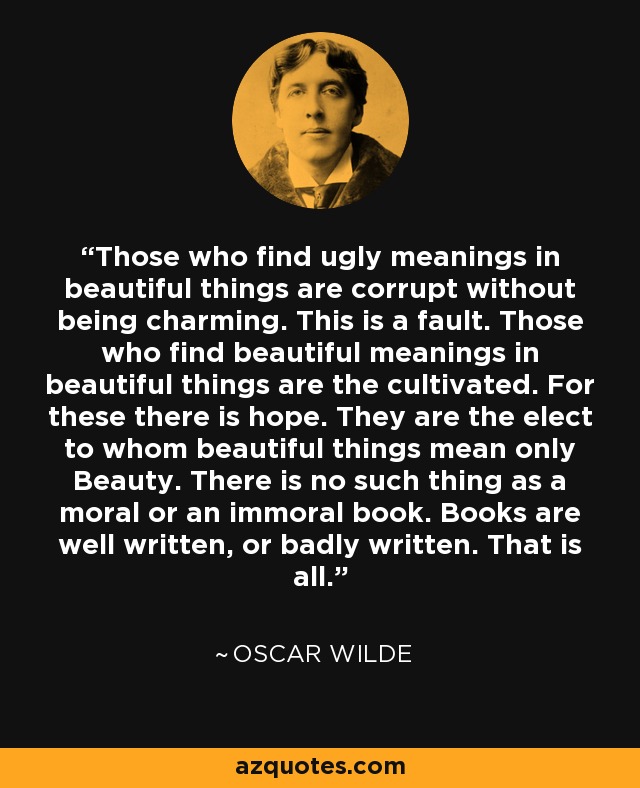 The quote above comes from the preface of A Picture of Dorian Gray that Wilde added in a later edition.  A long, passionate missive, it transcends the story itself in many ways, but has also been criticized as pretentious.  Judge for yourself:

There is no such thing as a moral or an immoral book. Books are well written, or badly written. That is all.

The nineteenth century dislike of realism is the rage of Caliban seeing his own face in a glass.

The nineteenth century dislike of romanticism is the rage of Caliban not seeing his own face in a glass. The moral life of man forms part of the subject-matter of the artist, but the morality of art consists in the perfect use of an imperfect medium. No artist desires to prove anything. Even things that are true can be proved. No artist has ethical sympathies. An ethical sympathy in an artist is an unpardonable mannerism of style. No artist is ever morbid. The artist can express everything. Thought and language are to the artist instruments of an art. Vice and virtue are to the artist materials for an art. From the point of view of form, the type of all the arts is the art of the musician. From the point of view of feeling, the actor’s craft is the type. All art is at once surface and symbol. Those who go beneath the surface do so at their peril. Those who read the symbol do so at their peril. It is the spectator, and not life, that art really mirrors. Diversity of opinion about a work of art shows that the work is new, complex, and vital. When critics disagree, the artist is in accord with himself. We can forgive a man for making a useful thing as long as he does not admire it. The only excuse for making a useless thing is that one admires it intensely.

All art is quite useless.”

4. “If you want to tell people the truth, make them laugh, otherwise they’ll kill you.”

– from The Nightingale and the Rose 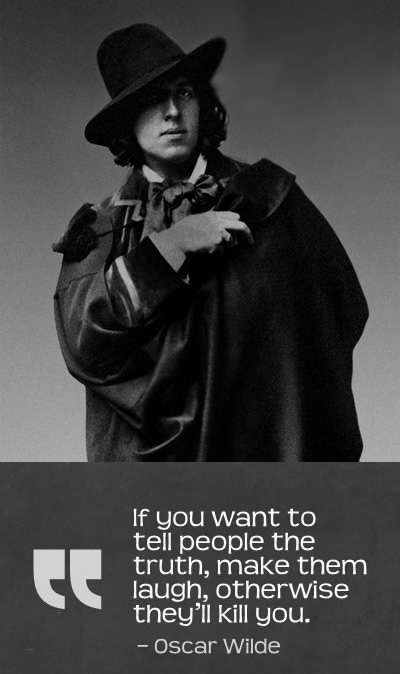 Obviously, this quote was close to home for Wilde, who suffered greatly for his honesty about his lifestyle.  He did want to make people laugh, and he succeeded, but it was not enough to save him from social death and exile.

3. “To love oneself is the beginning of a lifelong romance.”

– from An Ideal Husband 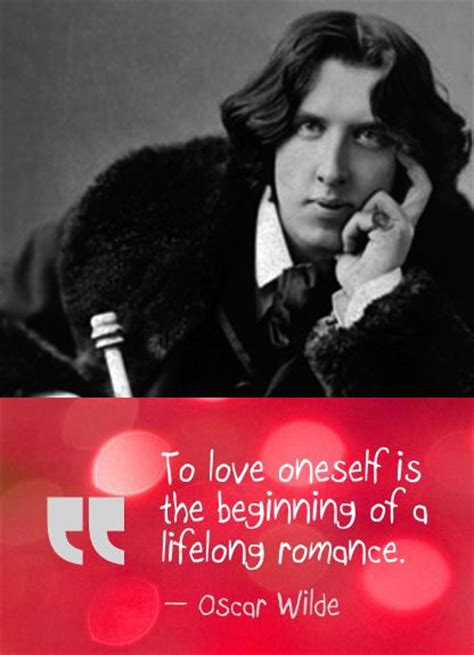 An Ideal Husband was the last play to hit the stage before Wilde’s imprisonment.  The play explores the concept of honor – public and private, and this quote speaks to Wilde’s, and the aesthetes idea that the artist’s only goal is to create art and get it into the world.  It also cracks on the Victorian idea of propriety – saying that if nothing else, if you love yourself, you have at least one lifelong fan.

2. “The public have an insatiable curiosity to know everything, except what is worth knowing.”

– from The Soul of Man Under Socialism and Selected Critical Prose 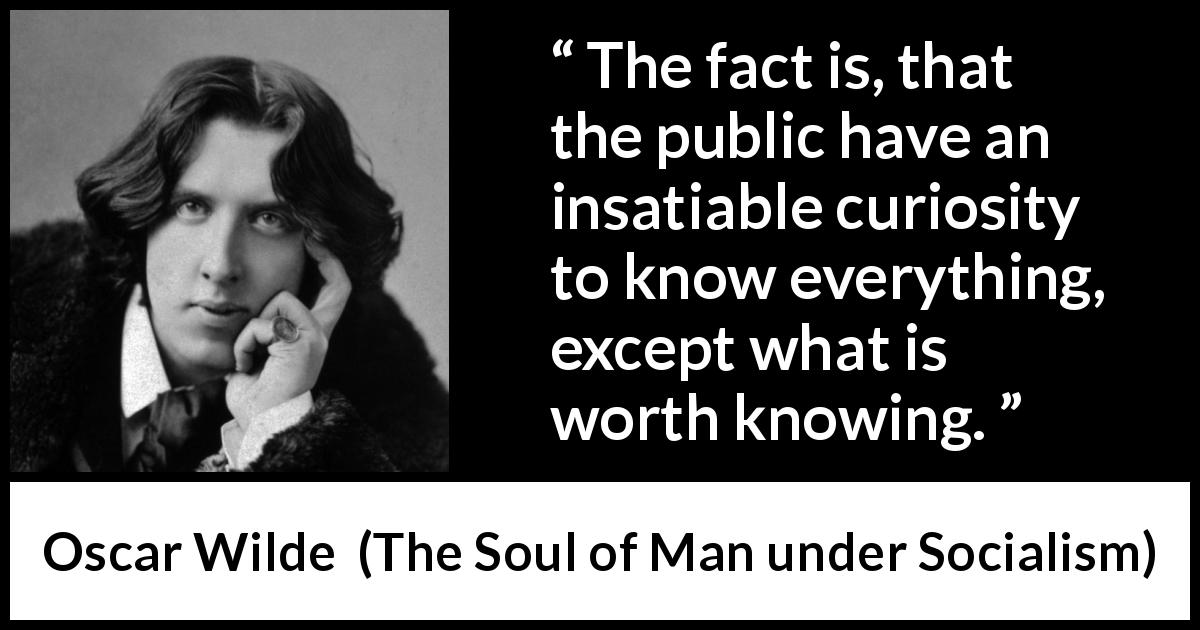 Obviously, Wilde was an artist and wanted to be known for his art, his wit, his style, and his statement to the world. Instead of being fascinated with those things, the public focused on Wilde’s personal life and the scandal that surrounded his trial and subsequent imprisonment.  After he was released from prison, he was in poor health and because he was an aspiring Catholic he requested a retreat but was denied, which hurt his feelings badly.  He reunited with Douglas, much to his wife and friend’s dismay, and his health continued to fail.  He cabled Robert Ross, who would be the executor of Wilde’s estate, to come help him after he and Douglas had split.

1. “My wallpaper and I are fighting a duel to the death.  One or the other of us has to go.” 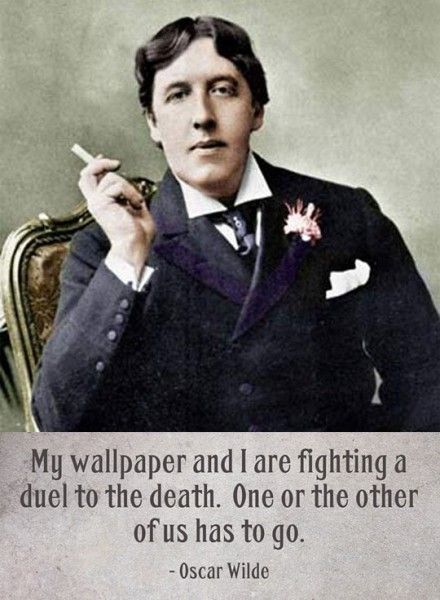 Wilde uttered this phrase to visitors in his last days, after he was confined to his hotel room.  Ross arrive on November 29, 1900 and sent for a priest because Wilde looked so sick.  He had cerebral meningitis and was on a lot of morphine at the time he died.  Sadly, one of the most prominent Wilde biographers, Richard Ellman, wrote that the meningitis was brought on by syphilis.  Further study has been done on the circumstances of Wilde’s death, and it is almost certain that he did not have syphilis after all.  Ellman rushed to finish his biography of Wilde because of his own failing health, so the cause of Wilde’s death remains a topic of some debate.  Wilde was baptized into the Catholic Church the day before his death, so his wish to become Catholic was finally granted, which brought him peace in his final hours.

Oscar Wilde died on November 30, 1900, leaving a rich legacy of thought, an interesting body of work, and, obviously, plenty of quotable lines.