Batman, Iron Man, Captain America – the crime-fighting heroes of pop fiction that many of us wish were real. Or more accurately, that many of us don’t know are real. Yes, people have been taking matters into their own hands, and after donning some tights, weapons, and a little armor, they’re helping to take back their homes from criminals and empowering the common man to stand up in the name of Justice.

The Real Life Super Heroes Project (RLSH) is the Justice League or Avengers of the real world in which heroes communicate and strategize their crime fighting. Below are a few of these informal crime-fighters and their teams, starting with: 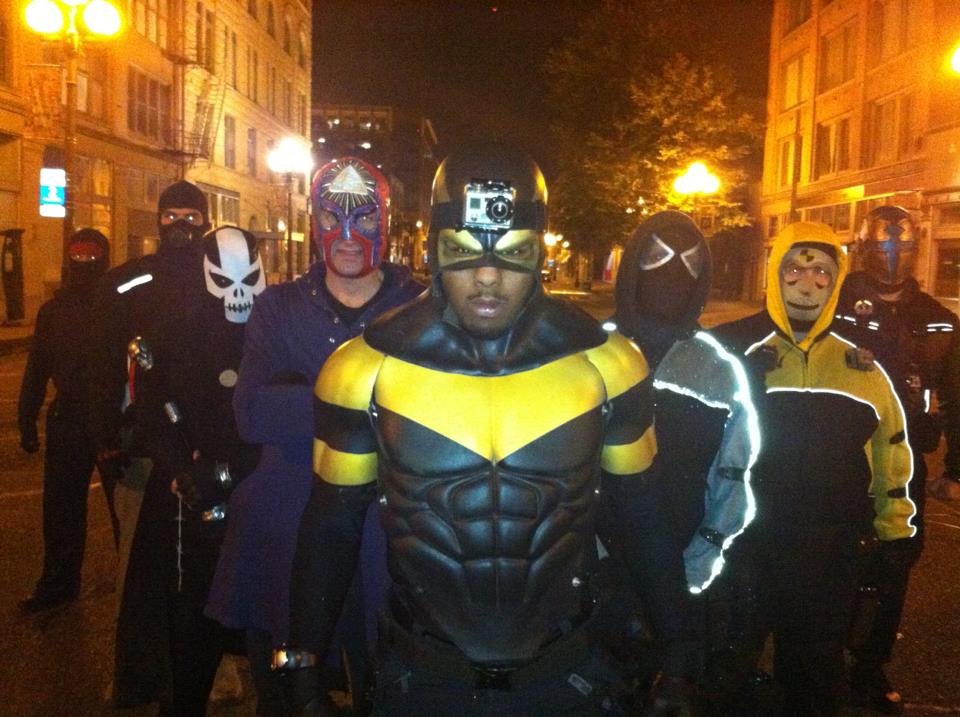 A 26-year-old American mixed martial artist from Seattle, Washington, Benjamin Fodor’s dissatisfaction with how modern citizens handle matters involving crime led him to become one of the most popular Super Heroes. His origin story has a defining tragedy, which is common with both fictional and real superheroes. When leaving a water park, he allowed his son to run ahead, after which he realized that his car had been broken into and his son injured by the broken window. The glass was broken with a ski mask tied to a stone. He didn’t have his phone and so sought help from one of the onlookers videotaping the event. However, instead of helping, the bystander replied that he couldn’t do help because it would ruin the video. Jones grabbed the phone anyway and called the cops. Another night, one of his friends was assaulted. Jones ran to his car to grab the aforementioned ski mask, put it on and brought the attacker under control until the police arrived.

These events led him to become, perhaps, one of the most controversial Real Life Super Heroes, Pheonix Jones. He began fighting injustice as a civilian, after which, he upgraded to his ‘super suit.’ Jones’ suit consists of stab proof and bullet proof plating, and comes complete with handcuffs and pepper spray. He has come to the aid of many people who were under attack and has himself come under attack. He has also been arrested a number of times. There are videos available online which have caught him in action. Jones went on to establish the Rain City Superhero Movement, a small team of super heroes with a background in mixed martial arts or the military. Jones made it clear that they had disbanded on 24th May, 2014. He will continue to fight crime, however.

Red Dragon is another RLSH who was also a member of the Rain City Superhero Movement. His main weapon is a bokken, which is basically a piece of wood shaped like a sword. He has a background in military training. He has stopped several crimes, including chasing a sex offender and cornering him until the arrival of the police. His identity is currently unknown and so is his history.

Red Dragon has also taken to reddit to answer a few questions about himself, the Rain City Superhero Movement and even the RLSH.

A martial arts instructor and RLSH who claims to have been fighting crime for around 10 years, Chris Pollak, aka Dark Guardian, states that he grew up with only a few role models, some of which were, unsurprisingly, comic book superheroes like Superman. He has trained in different martial arts for around 16 years. Dark Guardian patrols Washington Square Park and occasionally does charitable work by handing out food and money to the homeless. He dons a red and blue, bullet proof ‘super suit’

Dark Guardian announced plans to open up a school with the purpose of training children to become superheroes themselves. He began raising money with the intention of opening it up in 2014 but had his plans delayed after he was not able to raise enough. He continues to work on establishing the school, which he plans on naming HERO. Being the nice guy he is, he warns the children whom he teaches martial arts to call the police if they witness a crime instead of killing themselves by fighting criminals, as well as teaching them life skills and virtues.

This super hero’s image is reminiscent of classical super heroes, mainly because of the cape. He had an unfortunate childhood and saying he’d been attacked and molested as a child. His experience as a youth and the experience he had while helping the less fortunate led him to one day don his helmet and shin guards and found his own super hero team, the Xtreme Justice League. The XJL not only fight crime but do charitable deeds and events that Mr. Xtreme admits are not always successful. However, on an HBO documentary about the RLSH, he spoke of a case in which he and a fellow team member, the Urban Avenger, chased a criminal to a dead end until the police arrived, showing that many of their efforts do end in success.

Unsurprisingly, he has been a fan of comic books for a long time. Mr. Xtreme’s story is indeed inspiring to many –an average person who, when young, faced many hardships and oppression, rising up to protect and defend others from the same fate. However, not all are inspired and he, like most other heroes, faces either a lot of criticism or pressure to stop his informal war on evil. He also states that his parents are concerned for him and urge him to stop.

Buster Doe is a RLSH and another crime fighting hero that was a part of the Rain City Superhero Movement headed by Phoenix Jones. While his identity and background remains largely unknown, he almost certainly has some experience in the martial arts or the military, as that was a requirement of the Rain City Superhero Movement. He has assisted Jones in at least two incidents. When asked why not become a police officer instead of a costumed vigilante, he made it clear that one day he may become an officer but stated that costumed crime fighting is what he is doing for now.

His suit is almost fully black with a bullet proof vest underneath.

Urban Avenger, it appears, is primarily a sidekick to Mr. Xtreme, both patrolling the San Diego area. His origin is pretty simple: he states that he was watching a movie in which a character wondered why more people don’t dress up and fight crime like super heroes do in the comics. This made an impression on him. Some time later a friend mentioned Mr. Xtreme, which led him to make contact and join him in his war on crime as a new hero, the Urban Avenger. While his past and identity are mainly unknown, he says that he has also been a victim of crime. At the making of the HBO documentary about super heroes, Mr. Xtreme said that Urban Avenger had been in the RLSH for about two months. He is also a part of the Xtreme Justice League.

His armor and suit are pretty interesting. According to the official RLSH website, “Each of [his] boots consists of a foot-plate with bindings (much like a snowboard), and a fiberglass leaf spring. On the springs, which elevate his 5’7” frame to a towering 6’8”, and using no more than his own weight, he’s able to jump roughly four feet in the air, and run up to speeds of 20mph.”

There is much background info on The Eye but his identity remains unknown. He is perhaps the most unique on this list. The parts of his past that are known shows that he has a lot that qualifies him as a hero. He is a martial arts instructor, private investigator and inventor who works closely with the police when investigating a case. According to him, ‘’I may be known for my various gadgets, owing to my background as both a senior electronics tech and inventor from my youth, but meticulous observation and evidence gathering are the cornerstones of actual crime fighting and prevention.’’ His wife, Lady Mystery, is his crime fighting sidekick. Interestingly, The Eye admits to being inspired by Spiderman and Batman.

His style and clothing is black and reminds one of Sherlock Holmes or DC comics’ Question. He also carries a cane that doubles as a tazer.

In an HBO documentary about super heroes, Master Legend discussed his origins as a crime-fighter. While still a child in school, he got sick of a certain bully who would go around making trouble, beating up kids and pouring milk on their heads. The bully believed he had permission to do this because his mother worked at the school and no one stood up to him.

The young hero reached his boiling point, and after making a mask, went to school and brought that bully to his knees. On that day, Master Legend was born. In his later years as a superhero, he doesn’t do much crime fighting but more charitable work and helping of people. He is also a part of Team Justice, Inc. Peculiarly, like Marvel’s Moon Knight, he has managed to convince himself that he has superpowers. Don’t we all? It is, however, very evident that he cares for people.

Inspired by rage and the lust to hurt people, this unlikely hero began patrolling his neighborhood, focusing his violent lust on muggers, rapists and other offenders, and has even confessed to going overboard a few times. According to his Real Life Super Heroes Project page, he decided to take a different approach in his later years and instead chose to try to reason with and distract the criminals. He approaches them with the philosophy that these are people who can be redeemed. He says that he is Z everyday. He is also an artist and a photographer.

His metallic armor gives him the resemblance of the DC villain Deathstroke. It’s complete with shin guards, knee caps and shoulder pads. It’s design is likely to strike fear into the hearts of those who do evil.

In the world of super heroes, a background in policing, martial arts or the military is very helpful. Super Hero has both attended a police academy and wrestled in the past. His outfit is also reminiscent of classical super heroes. He helped to found Team Justice, Inc., and according to the official RLSH website, it is “the first non-profit organization for Real Life Superheroes with government-sanctioned tax-exempt status.’’ According to his RLSH page, he is also a supporter of several other charities, such as Metropolitan Ministries and Christopher & Dana Reeve Foundation.

His outfit, like classical super heroes, is mainly tights and is a tribute to the Golden Age and Silver Age of comic books. Many more honorable mentions are also involved in the war on crime, such as the mainly philanthropic, Thanatos, the passionate, Zetaman and Phantom Zero. The RLSH grows everyday and their efforts against crime are certainly not going unnoticed.