As long as humans have existed we’ve been trying to kill each other. In order to do it properly, however, we need the energy given to us by food. As a result, the world is naturally full of marvelously efficient individuals who go after two birds with one stone through the power of weaponized food.

It’s said that Native Americans used to use every part of the buffalo, letting nothing go to waste. Seemingly inspired by this ecumenism, residential health-care aid Drew Smith Warner attacked his friend and client with a whole raw chicken, rather than simply clubbing her with a drumstick or something.

Police, responding to her call, arrived to find her bleeding and surrounded by scraps of chicken. Warner was quickly picked up in a nearby park and booked on suspicion of assault. At least the chicken was fresh, otherwise he might have faced domestic terrorism charges for unleashing a salmonella-laden bioweapon.

For the easiest no-fuss weaponized food, you can’t go past poison. With a bit of background knowledge you can lay low countless enemies. (Un)fortunately, it’s surprisingly hard to concoct a properly lethal toxin out of household items when you don’t know what you’re doing. It’s probably even harder when you’re a few wedges short of a cheese wheel, so to speak.

Such was the case of Tiara Drake who found herself churning in 5 counts of attempted murder after an argument with her family went sour. On May 17, 2013, Drake asked Evelyn Johnson if she could have some of the cheese that was being eaten. Johnson said no, but feel free to have some of the other cheese in the fridge. Angered by this rude display of lactose intolerance, Drake decided that the only way to milk this situation was with poison.

And so that night, as everyone else slept, Drake dosed the next day’s breakfast cheese with a mix of window cleaner and detergents. Naturally they noticed that it tasted off. Drake was arrested while poison control advised the victims to dilute the toxins by drinking lots of milk. Even now, people still speak in hushed whispers about the family that got fifty times their yearly calcium intake in a single day. 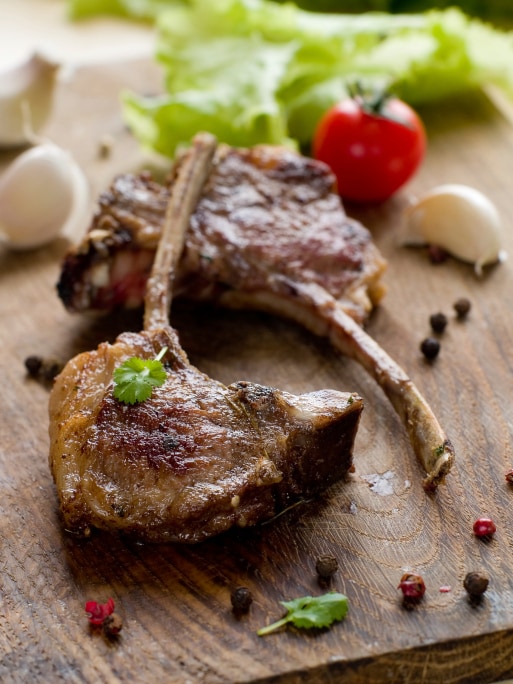 Not all weapons in a food fight are created equal. Ernesto Hernandez-Rosalez knew this, and so decided to give his food an edge… literally. In 2004 the imprisoned drug dealer settled a beef with a fellow inmate by using a sharpened pork bone as a shiv and going right for the eyes.

His victim, armed robber Jermaine Portillo, wasn’t seriously injured. At the end of the day, Stabby McPorkchop had more time added to his sentence while his victim had a whole new bone to pick. We can neither confirm nor deny that Portillo got revenge by fashioning a rack of ribs into a weedwhacker.

Most food weaponry is a bit limited in potential applications. If you really want to do something special, like rob a bank with spaghetti sauce, you need to get creative. Ophelia Neal, a swift-talking 53 year old did exactly that.

She walked into the bank, told a teller that she had a bomb in her bag and demanded money. The staff obliged, she walked out with an unknown sum and was quickly whisked away by a getaway driver. Unfortunately for her, it takes more than a silver tongue and nerves of steel to pull off a heist – you also need to get away cleanly. Police picked her up before too long, and discovered that the bomb was actually just two cans of spaghetti sauce. Thanks to their fine work, Neal was arrested and a catastrophic flavor explosion was narrowly avoided. 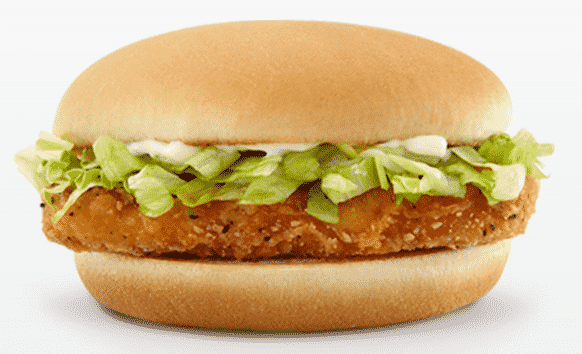 There are a lot of different martial arts out there, with countless master practitioners. Marvin Tramaine Hill II, for instance, was a master of McFu, the ancient art of weaponized fast food, and in his version of events, it was all self-defense.

His wife woke him from a nap at about 1 PM, brandishing a deadly McChicken sandwich. Thinking fast, he grabbed the burger and threw it back at her. He followed this up by swiftly retrieving part of the bun and slamming it in her face, leaving a broken nose.

At this point his cunning wife viciously went to the bathroom to clean herself up. He followed her in there, recording on a phone camera and capturing footage of her knocking the phone from his hands. He figured this would be enough to prove that she was violently deranged. He was wrong. When police arrived, his claims of self defense fell on deaf ears while his “video evidence” was trumped by his wife’s broken nose. Cops bravely arrested Hill, despite the danger posed by his McFu mastery. These days Hill has a conviction for domestic violence and a mugshot that makes it look like he’s slowly realizing that he should have just eaten the sandwich.

A lot of people would agree that there are worse ways to start the day than being woken up with a rub-down. Of course, it’s somewhat less appealing when the rubber is a robber and their choice of massage lotion is a bunch of spices taken from your kitchen. Two Californian farmhands were given the opportunity to ponder this first-hand when Antonio Vasquez broke in and robbed the place while they slept.

For reasons unknown, Vasquez decided to wake the pair after ransacking the home of valuables. For reasons even more unknown, he decided to do this by rubbing one of them with spices and beating the other with an 8 inch sausage. Once they were awake he promptly ran off, but considerately left behind his wallet and ID. In police lingo, that’s known as a clue. When the cops arrived, they quickly tracked him down to a nearby field where they found him wearing only a t-shirt, boxer shorts and socks. They weren’t able to recover all the evidence though; a dog ate the sausage before they got there.

Stockpiling canned food is nothing new. Doomsday preppers are all about the stuff, assembling it in case the horrifying scenarios playing in their head actually come true. That’s also exactly why Priscella Holley, principal of an Alabama middle school, has decided to collect it. The only differences are that she plans to use the canned goods as weapons instead of food, and her nightmare scenario is a school shooting, not the literal apocalypse.

One day she sent a letter home with students, asking parents to send in a canned item each. “We realise at first this may seem odd; however it is a practice that would catch an intruder off guard” she wrote. To be fair, she’s right on both counts. It does seem odd, and it would surprise anyone. Her plan was that, as a last resort, students would pelt attackers with the heavy cans, stunning them at least temporarily. Really, the only flaw is that if the shooter is a student at that school, they’ll know all about the canned arsenal and be ready for it. Maybe they should have a secret backup supply of hard cheeses – at least that’s food with a proven combat record.

We weren’t kidding about the combat cheese. In 1841, John H. Coe, a captain in the Uruguayan navy, was faced with a difficult choice. He was embroiled in a naval battle but his ship ran out of cannonballs. Rather than retreat, he ordered that they load cheese into the cannons. Edam cheese, to be specific. It hadn’t aged well and was so hard that a lieutenant broke a carving knife trying to cut it.

When they fired it off, it exceeded all their expectations. One cheese cannonball struck the main mast, sending shrapnel everywhere. Several more tore holes through the sails. One even flew through a porthole and shattered, killing two sailors. Under the dairy assault, Coe’s unprepared opponent called a retreat and limped away, probably wondering how on earth he was going to explain this to his superiors. 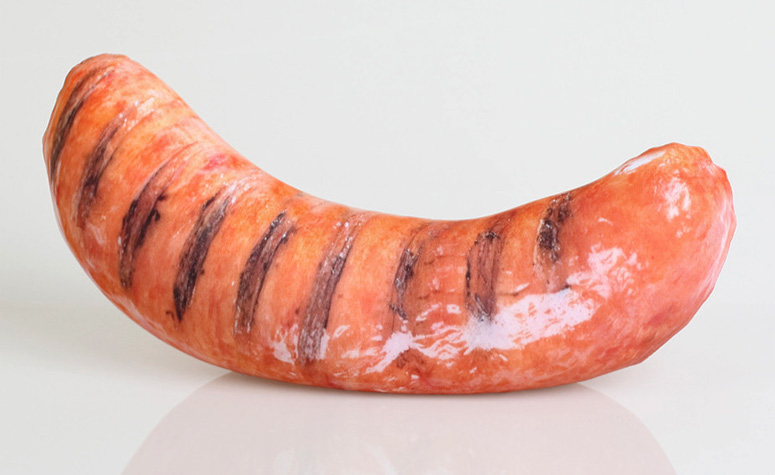 There’s something kind of nice about being spontaneous. One spur of the moment decision can take you to unexpected places. Like jail. Michael Baker was an opportunistic thief who had just lucked his way into stealing a 10 gallon barrel of bread and frozen sausages. Naturally he wanted to keep this run of luck going, and so decided to try adding a bicycle to the day’s takings.

To that end, he started beating a passing cyclist with frozen sausage link nunchucks from the food barrel. His victim made the sensible decision to get out of there, reasoning quite rightly that a guy on a bicycle can probably outrun a lunatic with a 10 gallons of barbeque goods. Despite suffering multiple lacerations, he made it out in more or less one piece.

1. Ascaris on the Side 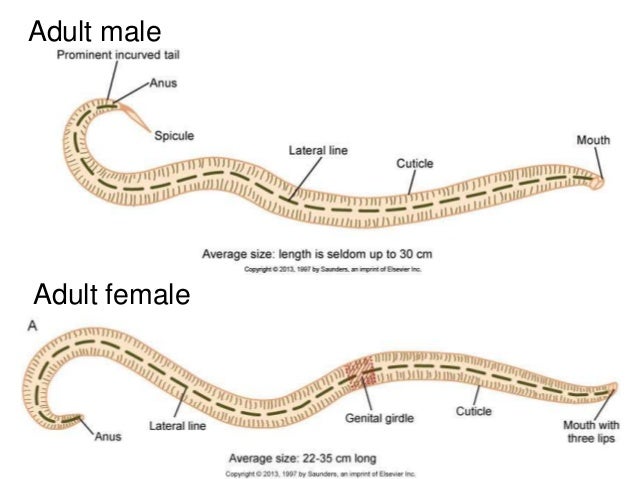 With a bit of common sense and some basic rules, you can probably avoid getting poisoned by a disgruntled nutter. One of these basic rules entails not eating a suspiciously nice meal prepared by someone who’s promised to poison you. In 1970, four housemates had plenty of time to consider this while they recovered in hospital.

It all started with a dispute over rent. One housemate, a post-grad studying parasitic virology, was behind on rent. While arguing over this he threatened to poison their food with ascaris suum, a particularly nasty pig parasite. The others were less than thrilled with his homicidal intent, and decided to evict him. His last act before leaving was to prepare all of them a lovely meal, which he ate none of. You can probably see where this is going.

Less than a week later they were all in hospital with severe breathing difficulties. Tests showed they were utterly riddled with parasites. The virologist had put countless thousands of worm eggs in their food, which took about a week to hatch and wreak havoc. Ascaris usually works its way around the body before settling in the gastrointestinal tract, but in this case there were so many that they went everywhere, including the lungs. Two of the victims made a full recovery, but the other two almost died and now suffer from permanent respiratory issues.

Police were quick to track down the disgruntled virologist, and in the face of four attempted murder charges and overwhelming evidence he was quickly… acquitted. The judge ruled that all the evidence was purely circumstantial. There was no actual evidence that he deliberately poisoned them. It might well have been an accident or unfortunate coincidence. It obviously wasn’t… but it might have been. Either way, there haven’t been any repeats of this incident, meaning that the parasitologist has either learnt to control his temper, or gotten a lot better at murder.