The internet has effectively erased the borders when it comes to things like a country’s native foods, and the global distribution of goods has brought the weird to our neighborhood food dispensaries.  Here are 10 bizarre fruits that people actually eat, that we otherwise never would have heard of.

Kiwanos are a strange melon/cucumber relative originally from New Zealand. The outside looks more like something from an 80s side-scroller than a fruit, and the inside is even more bizarre. Usually when something is that green, it is oozing out of a dead alien, and to be honest, isn’t real. But they are. When I was a kid, the commissary (the grocery store if you grew up on a military

base) had them once and I talked my mother into buying one. I then spent 2 weeks staring at it, wondering if it was going to scream at me and club me to death if I tried to cut it (it didn’t).

I eventually sliced it open, and as is the case with most tropical fruit, I decided I preferred apples. They are apparently pretty popular, though and work okay in fruit salads.

Also known as Pitaya, the dragon fruit lives up to its name in appearance. From the outside, it looks like a decorative modern art flame, and on the inside, well, that is what I figured a dragon must look like on the inside. They originally come from Mexico and New Mexico, but are pretty popular in the eastern world now and grown heavily in the islands of Indonesia, up across South East Asia, in Australia and even as far as Israel.

It is the fruit of a cactus, and is described as having a very watermelon like taste, despite looking like vanilla ice cream studded with dead fruit flies. 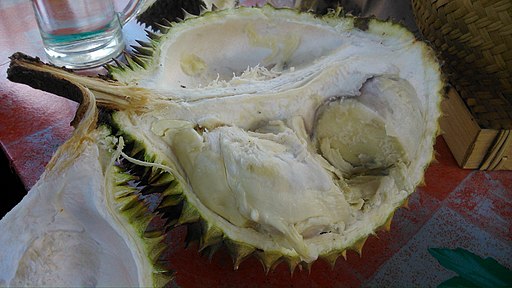 Ahh, durian. Alternately known as “The King of Fruit” and “The fruit that smells like rotting garbage and onions.” My favorite description is from Richard Sterling and quoted on Wikipedia as this:

“Its odor is best described as pig-sh*t, turpentine and onions, garnished with a gym sock. It can be smelled from yards away.”

The same page also mentions that they have also been described as smelling like civet, sewage, stale vomit, skunk spray and used surgical swabs. Yum.  Some people are absolutely in love with it, and apparently a variety of animals including tigers can’t get enough of stale vomit encased in a fruity hedgehog, but the people in Singapore seem to have the right idea; the fruit is banned from all public transportation. 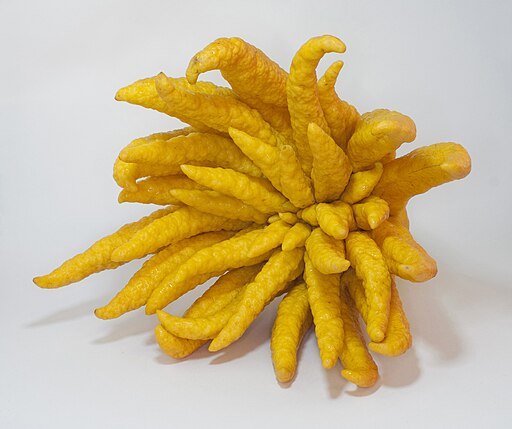 Buddha’s hand is a citrus fruit with little real “fruit” to it, being mostly citron scented rind, in the form of awful looking yellow fingers. It is easily the most horrible looking thing bearing the name “Buddha” unless some sick bastard named a rotting carcass after Siddhartha.

People don’t generally eat them, because of the lack of actual fruit in it, but they use them to perfume rooms because they put out a pretty powerful citrusy fragrance, however since their pith (the bitter white part of the citrus peel) is actually not bitter, the “fingers” are sometimes cut off and used in fish dishes or salads.

While passion fruits aren’t exactly rare these days, they still kind of freak me out, and they are odd looking. They are originally South American and the skins have been shown to contain trace amounts of cyanogenic glycosides, which is to say microscopic amounts of really nasty poison, but then again so do apple seeds, so don’t sweat it.

People are almost as psycho about passion fruit as they are durian, although not smelling like a corpse suggests that they may be on to something. Here’s a fun bit of trivia: Guess how the Passion Fruit got its name? Well, before the fruit was named, the flower was called the “Passion Flower”. Do the flower and fruit inspire lust? Do they keep couples together through tough times? Or rather, did the flowers remind the first Europeans to discover them think of Jesus being tortured (the Passion)and named them after that? Hint, it had nothing to do with love.

I love anything where the name could get a kid in trouble for saying it in school, which includes the word “screw” and anything that sounds like “ass.” Screw pines also go by the more boring name of Pandanus… okay, so “Panda anus” is a winner too. The fruit is used for everything from dyes to food. Not the most exciting thing on the list, but it certainly has the most fun name. 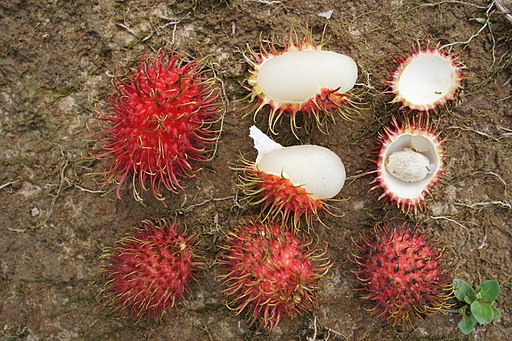 I’ll be honest with you; rambutan reminds me of a vegetarian testicle. Sorry for that, but I aim for honesty in my writing and it looks like some weird critter from Australia carries them around to make babies and possibly drink from. It hails from Southeast Asia and is popular for jams and jellies, and the mildly poisonous seeds are sometimes roasted and eaten (roasting them apparently makes them safe).

These fruit look like they are just as likely to eat you as you are it. The sausage shaped pods are filled with edible goo that looks like it should be bursting with flies, but they come from chocolate scented flowers, which means they may not be half bad. The stem of the plant is used as a diuretic because it contains 30% potassium salts, and New Zealand has banned the sale of the plant because it is apparently a virulent pest that likes to squeeze out competing flora.

Atemoya are a hybrid made from Sugar Apples and Cherimoya. Much like the durian, they look like you could shove it onto the end of a stick and smite foes with them, but they are actually smooth and soft like the sherimoya. They are described as tasting like a pina colada with vanilla, which actually sounds quite delightful. Oh, and because nothing tropical seems to be without a horrific dark side, the seeds are inedible and poisonous. Also, the flowers have a weird behavior; from 2 to 4 PM, they are female, and on alternating days, from 3 to 5 they are male. This fruit is a lot like Cillian Murphy in Peacock.

Some fruit names are deceptive; Breadfruit tastes nothing like bread, and road apples couldn’t look less like a road if they tried. (They taste awful, too.) This one pretty much hits the nail on the head. I will take my vegetable matter without disturbing scales, thank you very much. Pinching the end of the fruit causes the skin to slough off, and the pieces of fruit resemble garlic. The flavor is described as sweet and acidic, that is if you can get past the fact that it looks like garlic from the plant the lizard people in V came from.