The subject of humor and what someone thinks is funny is always relative, subjective and a matter of personal opinion. But that is what this site is all about…personal opinions. With that in mind here is a list of the top ten funniest webcomics on the Internet today. Whether you agree or not, you’ll probably find something you will think is funny and add to your weekly reading. Please feel free to add your own personal favorites in the comments…they are always welcome.

Update: Frenetic Funnies is no longer publishing new comics, so Cyanide and Happiness gets the open spot (see below).

The one-panel laughs come hard and fast, hence the name Frenetic Funnies. Jeff Swenson, both artist and creator has done a wonderful job with his webcomic.

Cyanide & Happiness began as a small series of comics drawn by Kris Wilson at the age of 16.  Kris shared his comics with the forum of Stickdeath.com. The webmasters of Sticksuicide (Matt Melvin, Rob DenBleyker and Dave McElfatrick) eventually gave up on StickSuicide and started Explosm.net. They saw potential in Kris’ comics, so they invited him to continue the comic daily. Explosm is currently run by Matt, Rob, Dave, and Kris.  The current name “Cyanide & Happiness” comes from a strip in which one character is selling cotton candy made of cyanide and happiness. Now quit reading this boring history lesson from Wikipedia and go read the comic. Here is one of my favorites.

9. The Adventures of Dr. McNinja 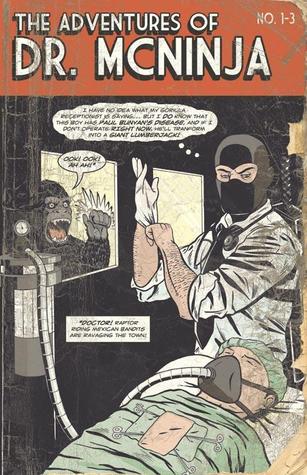 Dr. McNinja’s story has many absurd plot twists, and often makes allusions to outside works, most prominently Dr. McNinja’s quote of “What would Batman do?” Starting with “So What Is A McNinja?”, each page also uses tooltips to add background information and in-jokes, such as the author comparing the comic’s visual style to Frank Miller’s comic Sin City.

Achewood is a webcomic created by Chris Onstad. It portrays the lives of a group of anthropomorphic stuffed toys, robots, and pets. Many of the characters live together in the home of their owner, Chris, at the fictional address of 62 Achewood Court. The events of the strip mostly take place in and around the house, as well as around the town of Achewood, the fictional suburb which gives its name to the comic, and is likely a thinly-veiled Palo Alto, California. The comic’s humor is most often absurdist, generally lacking a set punch line, and sometimes branches into the surreal.

Each comic uses the same artwork, with only the dialogue changing from day to day. (There are occasional deviations from this, such as several episodic comics). It has been compared to David Lynch’s “The Angriest Dog in the World” comic, and also made references to it. The strips take on topics including ethical relativism, the nature of happiness, the secret to being loved, and so forth.

A new drawing is posted every day at 12:00 AM, EST. Each comic features small, simple drawings, paired with short captions or dialogue. The style of humor on Toothpaste for Dinner encompasses surrealism, irony, social commentary, cynicism, and schadenfreude, among other sub-types of humor. Each cartoon is entirely self-contained (except in certain cases of a series, such as the horoscope series.)

The strip regularly features the two authors’ cartoon alter egos, Tycho Brahe and Jonathan Gabriel (“Gabe”), who represent Holkins and Krahulik respectively. Holkins and Krahulik have explained that the characters were not originally meant to represent them, thus they are not caricatures. The two characters spend much of their time playing and commenting on computer and video games, forming the basis of the humor in the strip. Another theme, albeit less common, is the use of conflicts between the two in real life. The strip also sometimes refers to other Internet subcultures, and often features in-jokes that are explained by the news posts accompanying each comic, usually written by Holkins.

In the beginning, Jon and Phillip were geeks and they watched TV a lot. That is, when they weren’t at the Peculier Pub, consuming great quantities of beer. Jon was particularly unsuccessful with women, suffered from amazingly low self-esteem and had little in the way of spine, job or coolness. They hung out a lot with a talking goat named Toothgnip who had a way with the Ladies (later revealed to be due to his Panties of Potency). At some stage Phillip managed to corrupt two members of an extraterrestrial species. And so Neil and Bob (pun intended) became new and omnisexual members of the cast. You can see how this comic has the seeds of humor with a description such as this.

The subjects of the comics themselves vary. Some are statements on life and love (some love strips are random art with poetry), and some are mathematical or scientific in-jokes. Some strips feature simple humor or pop-culture references. Although known for its crudely drawn cast of oddball stick figures,the comic occasionally features landscapes, intricate mathematical patterns such as fractals, or imitations of the style of other cartoonists (as during “parody week”).

The comic chronicles the adventures of a fictional video game magazine company and its employees. A popular but often controversial figure in the field of online comics, Kurtz is usually willing to share his opinions about comics and gaming culture in his blog, which is hosted on the same website as his comic strips.

Originally, PvP focused on video gaming and the larger “nerd culture” including comics and RPGs. Over the years, the humor has broadened to include technology jokes, relationship humor, in-jokes about and mocking of the generation gaps between the different characters, with gaming increasingly taking a back seat. Kurtz occasionally comes under fire for his satire. Sometimes Kurtz will speak of his father’s open disdain the the strip.