In these times of natural disasters, man-made catastrophes and civil unrest, it’s a boon to hear of against-the-odds survival stories. Of course, many brave people overcome mental and physical illness everyday – but this list concentrates on the most weird and wonderful death-defying experiences in history.

Mike and his head

This bird proved that, yes, a chicken can still run around with its head chopped off. When Mrs Olson sent her husband Lloyd into the yard to fetch a chicken for supper, the axe was brought down on one hapless rooster’s neck. However, a bad aim caused the axe to miss the jugular and the brain stem, and the five-and-a-half month old rooster lived. Mike became a touring celebrity in his remaining 18-months of life, where the disbelieving public saw him strut, attempt to peck and gurgle as he tried to crow. The long-suffering bird eventually died in 1947, after choking during the night. 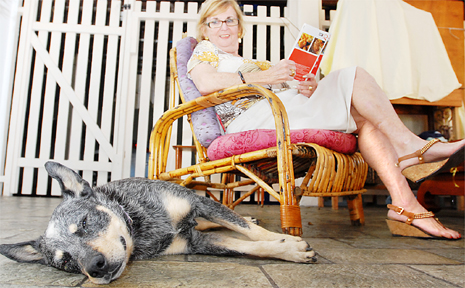 Australian cattle dog Sophie Tucker is glade to be home with owner Jan Griffith after surviving more than four months on St Bees Island after she fell from the family’s boat. Peter Holt

Australian cattle dog Sophie Tucker is glade to be home with owner Jan Griffith after surviving more than four months on St Bees Island after she fell from the family’s boat. Peter Holt

This cattle dog from Australia, became the latest legendary castaway when she fell overboard during a family yachting trip in November 2008. Not only did the four-year-old swim through five miles of shark infested waters to a nearby island off Queensland, but she then learned to hunt the local goats and koalas to live until her family finally tracked her down.

This British explorer was attempting to scale Siula Grande in the Peruvian Andes when he fell and broke his leg. In order to descend back down the peak a bit faster during a blizzard, Joe’s climbing partner, Simon Yates, hooked himself onto a rock and slowly lowered him down the majority of the mountain, until Joe slipped down an overhanging ice face – almost pulling Simon down with him. Unsure whether his climbing partner was alive or dead, Simon eventually decided to cut the rope after deliberating for an hour. Joe fell into a gaping crevice below and onto an ice bridge, suffering severe injuries. Despite his injuries, plus dehydration and hypothermia, Joe managed to crawl back to base camp, where he found Simon and their other traveling partner moments before they were due to leave. 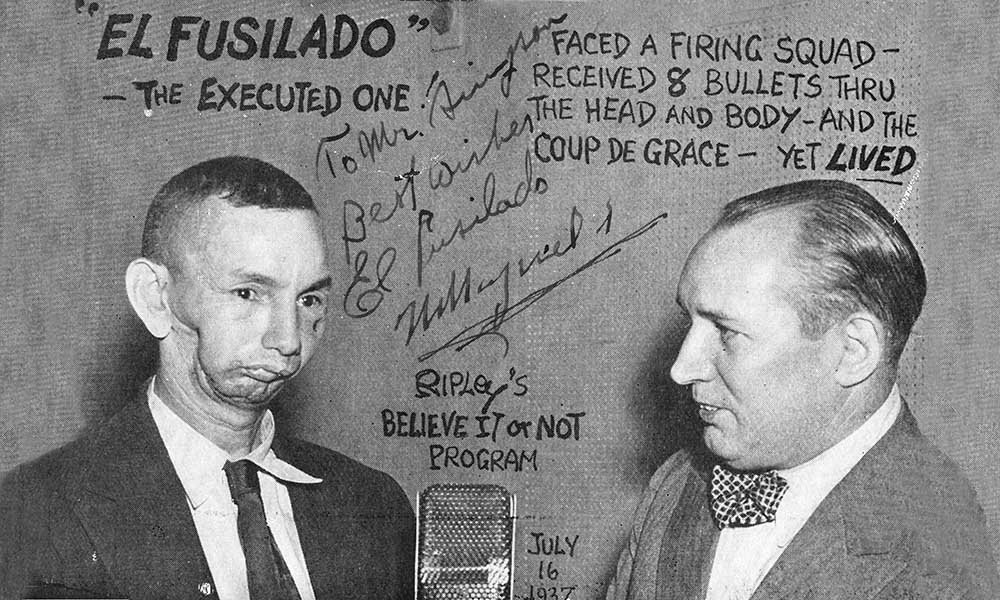 The Mexican Revolution saw many deaths – but no one came so close as Wenseslao Moguel. The young man was captured on 18 March 1915 and sentenced to death by firing squad. He was shot eight times by the squad, then once more at close range through his head. He feigned death until his shooters left, then miraculously escaped. The man in the photo with Wenseslao is Mr. Ripley from Ripley’s Believe it or Not fame.

This Scottish castaway was left on an uninhabited island in the South Pacific Ocean in 1704 due to his trouble making on an expedition ship. Left alone with just a musket, gunpowder, carpenter’s tools, a knife, a Bible and some clothing, Alexander lasted four years and four months in complete solitude – apart from some domesticated wildcats. After hiding from two Spanish ships that arrived and departed the island due to fear of capture, Selkirk was eventually discovered and befriended by an English ship in 1709.

John McCain being pulled from the water by North Vietnamese soldiers, and subsequently jailed. October 26, 1967.

This famous politician may not have won the election, but he sure won the fight for his life back in October 1967. His stay in the ‘Hanoi Hilton’ lasted five and a half years and was full of horrific incidents, including repeated torture, two years of solitary confinement and a suicide attempt. Of his experiences, McCain says: “I had learned what we all learned over there: Every man has his breaking point. I had reached mine.” This Australian was a key figure in the so-called Heroic Age of Antarctic Exploration. His Australian Antarctic Expedition, which begun in December 1911, however, nearly saw the end of his adventures forever. He was the only survivor in his team after his fellow explorer, Lieutenant Ninnis, fell through a crevice with the dogs and supplies and were lost. The other member of his exploration team, Xavier Mertz, died from a combination of weakness, cold and vitamin A poisoning from eating dog livers.  Ironically, Mawson fed the weaker Mertz the dog livers thinking they were more nourishing than the muscle tissue of the dogs which led to Hypervitaminosis A. Mawson continued alone and fell into a crevasse and saved himself by wedging his sledge above him. So bad was his condition when he arrived at base camp, his rescuer exclaimed, “My God, which one are you?” Of the 93 passengers and crew on board LANSA flight 508 on December 24 1971, only 17 year old Juliane survived. The plane was struck by lighting above the Peruvian rain forest and Juliane was blown out of the plane, still strapped to her seat, and landed two miles down  in the dense thicket. She came round, blind in one eye, with a broken collarbone and cuts and bruises. Borrowing her biologist father’s advice that water runs downstream and where there’s water there’s civilization, Juliane – wearing a mini skirt and sandals – trekked for nine days until she found a small cabin. She cleaned her injuries and worm-infested cuts and waited until the occupant came back. She was eventually reunited with her father and continued her studies to become a zoologist.

Uruguayan Air Force Flight 571 was flying over the Andes on Friday 13 October 1972 when it crashed into peaks hidden by cloud. It was carrying the Uruguayan Stella Marris College rugby team to a match in Chile, but only 16 lived to tell the tale. The others died during the crash, in the days soon after from injuries or cold, and eight succumbed to an avalanche on the 17th day. The stranded survivors were left with no option but to eat the flesh of their dead teammates and adapt to living in the extreme conditions. The remaining men were found almost 10 weeks following the initial crash when two members went on an expedition and flagged down a passing Chilean horseman.

After years of serving in the British Army and travelling the world pursuing adventure and danger, Paul Templer decided to ‘settle down’ in his native Zimbabwe and become a river guide. During one routine trip, he was leading a group of tourists down the Zambezi River when he encountered a surprise attack from one of Africa’s most dangerous animals – a bull hippo. The hippo almost overturned one of the canoes, throwing another guide into the hazardous water. Templer jumped in to save his colleague, but the huge hippo sprang up between them and swallowed Templer’s head, simultaneously pinning his arms by his side with his razor-sharp teeth. The hippo carried him under water, and momentarily dazed, all Templer could think was “wow, it’s dark in here”. Somehow, he unskewered his body, levered himself out of the hippo’s jaws and swam to the surface – but the frenzied attack wasn’t over. The hippo mauled Templer several more times, ripping his foot, severing his arm, breaking ribs and tearing holes in his back and chest. After a seven hour operation – which involved the amputation of the severed arm – Templer began the long road to recovery. Undeterred, he still leads safari trips, as well as being a coach, public speaker and a key fundraiser for the children’s’ charity ‘Make-a-Difference’.