There are just too many creepy places in America for this list to be the top 10, but these 10 destinations are all near the top of the list in terms of all-in-all creep factor. With Halloween fast approaching this list is appropriate and if you live near any of the places you may want to take a visit and see what you have been missing. From an axe murder’s home to a witch’s cave and a ghostly cemetery you are sure to find something to send chills up your spine. Doing research I came across this creepy video, but be warned, you may have nightmares: YouTube – Spooky ghost video car commercial

On August 4, 1892, someone killed Mr. and Mrs. Borden with a hatchet as they were in their home. Mrs. Borden was found in an upstairs guest room and Mr. Borden was found downstairs on the sofa. The accused was Lizzie Borden, the daughter of Mr. Borden and stepdaughter to Mrs. Borden. Despite her arrest, she was acquitted of the murders and died in 1927 still being labeled a murderer by many. Paranormal recordings turned up some creepy findings. If you think you could do it, find out for yourself what the experience is like by staying overnight.

John Bell and his family  move to Roberson County in 1804. In the late summer of 1817 something would happen that would change their lives forever. Some members of the family began seeing strange looking animals around the property. Then late at night they started hearing knocking sounds on the doors and outer walls of the house. Later sounds were being heard in the house. Sounds of a rat gnawing on the bed post, chains being drug through the house, stones being dropped on the wooden floors, then gulping and choking sounds. When asked who and what it was, it gave different identities. It once stated that it was the witch of a neighbor woman named Kate Batts. This is what many people believed, and from then on, this unseen force was called “Kate” the “Bell’s Witch”.

Her goal was the death of John Bell although no reason was given by Kate. In 1820 John Bell died and Kate was suspected of poisoning him.

On June 10, 1912, an intruder with an axe killed eight people as they slept in a house in the small town of Villisca, Iowa. The victims were a husband and wife along with their four young children. Two other young children who were visiting at the time were also among the dead. The murderer is unknown and was never caught. Some swear that this house is haunted by ghosts after seeing strange visions and hearing odd noises. If you are willing to find out, you can stay in this house overnight. Book early for overnight tours; available days tend to get filled fast. Should spending the night be too much for you to handle, there are also daylight tours.

Staff who work in the kitchen next to the ballroom after hours say they have heard a party going on when the room was empty. In one guest room people claim to have seen a man standing over the bed then running into the cupboard. It is further claimed that this same apparition is responsible for stealing jewelery, watches and luggage that has gone missing. Some others reported that they have seen ghosts in their rooms in the middle of the night, just standing in their room then disappearing. Sometimes, people in the lobby can hear the piano playing from the ballroom. When workers check to see whats going on, there would be nobody sitting in front of the piano.

The historic ghost tour points out creepy and ghostly experiences that have taken place at the hotel. Although  the tours are open to the public, reservations are required ahead of time. If you stay at the hotel, you may want to sleep with one eye open in case you get an unexpected ghostly visitor.

Stephen King got the idea for The Shining after staying in the almost empty hotel on the night before it closed for an extended period.

The building once held hundreds of tuberculosis patients. It closed in 1961 to be renovated. It opened in 1962 as a geriatrics center and then finally closed in 1980. Rumor has it that there is an incredible amount of paranormal activity that goes on in this location. They have several types of tours ranging from a couple of hours to a full night.

Some urban legends claim that “63,000 deaths” occurred at the Sanitorium. According to Assistant Medical Director Dr. J. Frank W. Stewart, the highest number of deaths in a single year at Waverly Hills was 152. Some independent researchers have suggested that 162 people died at Waverly Hills in 1945, so the highest total number of deaths possible over 50 years was approximately 8,212.

The Sorrel Weed House has a reputation for being one of the most haunted buildings in Savannah. People claim to see figures in the windows and hear disembodied voices inside the house. The connecting carriage house behind the main house was said to have housed a female African-American slave who was murdered by a member of the family.

The beautiful house was completed in 1840 for Francis Sorrel. Due to its history, it was named as a State Landmark in Georgia. Its present day happenings caused it to be featured in an episode of Ghost Hunters, where evidence was found that there may be more than the living in the house. The Ghost Hunters tour of the Sorrel-Weed House will tell you all about the evidence that was found. Keep your eyes and ears open when you pass through.

For thirty-eight years starting in 1884, this architectural wonder was not constructed as the result of need; it was built under the orders of Sarah L. Winchester because, as rumors say, she believed spirits were giving her building instructions. Mrs. Winchester was the wife of rifle manufacturer William Winchester. After her husband and daughter’s deaths, rumors say that Mrs. Winchester ordered the building of the house because she believed she was cursed by the spirits of those whose deaths were a result of Winchester rifles, those who would also make her death happen if she did not continuously build a house for them.

What was once an eight-room house turned into a massive 160 room mansion. The construction took place day and night, all week and all year until her death in 1922. Stairs lead to the ceiling and doors lead to nothing. It is said that ghosts, including Sarah herself, haunt the house. While the reasoning behind the constant building is not known for sure, what is for sure is that the house is unlike any other you have ever been to. Take a public flashlight tour on Halloween to see if you can have your own ghostly experience. 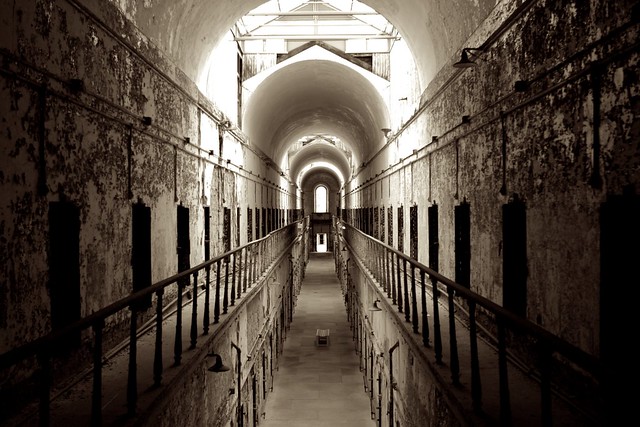 You do not walk into an eleven acre abandoned penitentiary if you want to feel warm and fuzzy. The most sought after Halloween tour, appropriately titled “Terror Behind the Walls”, takes place at night and does not discuss the history of the prison; the main objective of the night tour is to scare you senseless. The informational tours about its sordid history take place during daytime hours, which are undoubtedly still creepy as you walk around the facility that opened in 1829.

Keep your eyes open for ghosts, which are said to walk the abandoned halls. If you feel a hand on you, do not be surprised if there is no one there when you turn around. Listen for noises, those of the living (and maybe the dead), which can catch you off guard no matter where in the facility you are. Before you enter, make sure to sign the waiver, which is necessary to take the tour.

There are a variety of legends surrounding the Myrtles. The house is reputedly built over an Indian burial ground, and the ghost of a young Indian woman has been reported and during the Civil War, the house was ransacked by Union soldiers, and legend claims that three were killed in the house. Supposedly, there is a blood stain in a doorway, roughly the size of a human body, that will not come clean. Other legends say that cleaners have been unable to push their mop or broom into that space.

This 200+ year plantation is incredibly beautiful and, as some may say, quite haunted. In addition to the beauty of the location, the stories of love and death that occurred at the plantation are enough to create a draw to the plantation. When you mix in the numerous stories of ghostly encounters and unexplainable photographs, it creates quite the creepy locale. There are historic tours and mystery tours available of Myrtles Plantation. 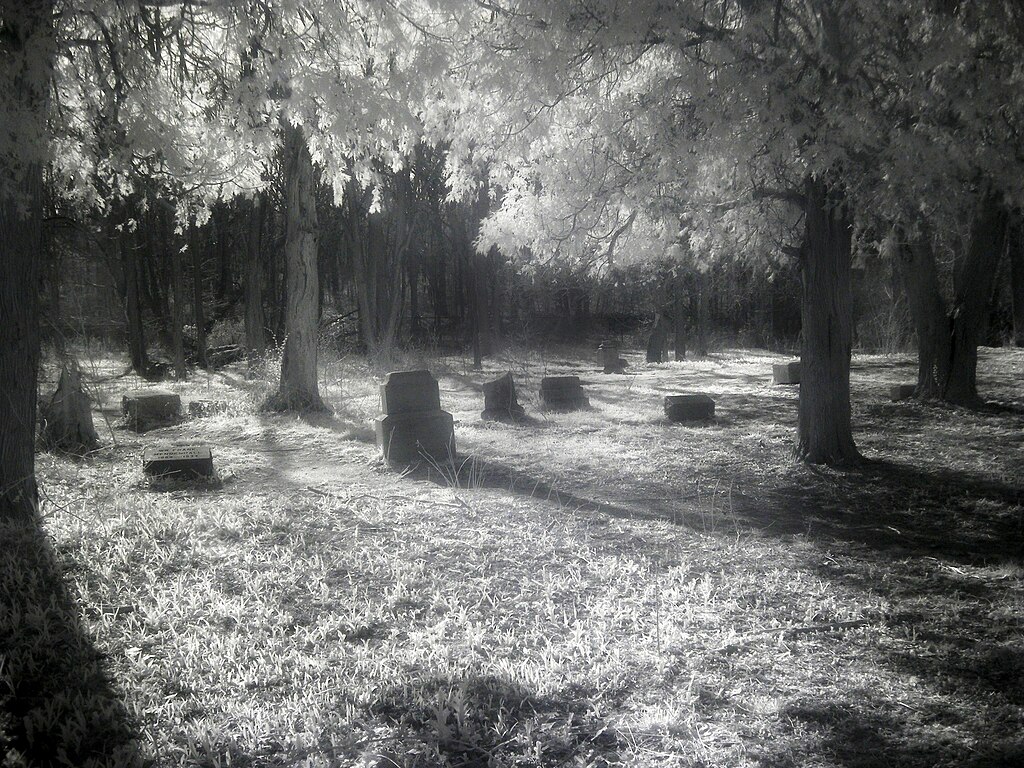 Located in the southwest suburbs of Chicago, Illinois, this cemetery exists peacefully in the Rubio Woods. At first glance, it looks like a small, unimportant cemetery. The chain link fence which once protected it from outsiders is broken, a big hole marring the protective metal. The cemetery itself is broken down, suffering from years of vandalism and trespassing. Some gravestones are dismantled.

Although this sounds like an innocent, unimportant cemetery, its past is shrouded in despair and death. A white, uninhabited pond exists in the northwest corner of the cemetery. Mob bosses used it as dumping grounds for their victims in the early 1900s. They officially stopped burying the dead in the 1960s. Since that time, people have reported many sightings, making Bachelor’s Grove the most haunted cemetery in the United States. Many of those sightings are seen near the pond.

Sightings include a ghost called the White Lady. Clad in white, she roams the graves looking for her lost baby. Other sightings include a two-headed man and a ghost house. Bachelor’s Grove is truly the spookiest haunting grounds in the United States.