Have you ever had a memory that turns out to be wrong, only to meet someone else who has the exact same false memory? How can that be possible? Did someone change reality when you were not looking, or did you accidentally jump into an alternate universe with small, but noticeable differences? Unfortunately, no (as far as we know). This phenomenon of collective misremembering is known as the Mandela Effect, and if you know where to look, it’s all around you. For instance, there’s a chance that you have vivid memories of the ten following events that didn’t actually happen. The term “Mandela effect” was coined in 2010, when tons of people on the internet discovered that they had very clear memories of South Africa’s anti-Apartheid revolutionary, Nelson Mandela, dying in prison in the 1980s as a martyr to his cause. This was particularly weird because Mandela didn’t actually die until 2013, and in fact famously served as the country’s president from 1994 to 1999.

A paranormal consultant called Fiona Broome coined the term “Mandela effect” based on this collective misremembering, and her explanation was that this was a malfunction in our memory, not unlike a glitch in computer software. Others preferred to think that this was a remaining effect of history being changed by time travellers, and even insinuated that the whole thing was caused by interference from Satan and other dark spiritual forces. Psychologists, on the other hand, say that the phenomenon is a social version of “confabulation,”  the unconscious manufacture of misinterpreted or even completely fabricated memories that is relatively common in everyday life. What’s the first image you conjure when you picture King Henry VIII, Britain’s favorite portly serial-marriage enthusiast? Chances are that at least some of you are picturing the famous painting where he was eating a turkey leg, and perhaps seated at a banquet table. There’s just one problem: That picture is not real. There are plenty of homages to it in movies and printed media. Even The Simpsons has referred to it. But an actual painting of King Henry VIII, from his own era, just plain doesn’t exist.

There are plenty of theories as to what could have triggered this particular false group-memory, from obligatory reality-alteration ideas to an old black and white movie where the actor playing the king heartily devoured a fried chicken. One of the more reasonable-sounding theories says that it may be caused by our brains playing tricks on the legendary portrait by Hans Holber the Younger, where the king holds a brown glove in one hand and his other hand hovers near an ornate dagger. It’s easy to imagine a mischievous mind glancing at a picture of a reasonably well-fed man and interpreting either of these objects as a large drumstick.

Darth Vader’s legendary line in The Empire Strikes Back is a plot twist to end all twists, and it remains one of the most iconic sentences in movie history: “No, I am your father.” Wait, that doesn’t sound right. Shouldn’t it be “Luke, I’m your father”?

Unfortunately, no. “No, I am your father” is the real line, despite the fact that it’s far less impressive and gives way less context than the famous, misremembered one. In fact, our brain’s nasty tendency to remember famous quotes as quotable as possible has led to a whole bunch of famous quotes that were never spoken aloud in their actual movies and TV shows. The closest Captain Kirk ever got to “Beam me up, Scotty” in the original Star Trek series was “Scotty, beam us up.” Dirty Harry never utters the question “Do you feel lucky, punk?”, and Hannibal Lecter doesn’t actually say “Hello, Clarice” at any point of Silence of the Lambs. Even Humphrey Bogart never says “Play it again, Sam” in Casablanca — although Ingrid Bergman does say “Play it, Sam” at one point, Bogart’s actual quote is much longer and less memorable “You played it for her, you can play it for me. If she can stand it, I can. Play it!” Chartreuse is a shade between green and yellow that emerged in the late 19th century and experienced its heyday in the fashion of the roaring 1920s. However, a small but significant percentage of population is gently losing its mind over the fact that they’ve always remembered chartreuse as a deep, earthy red, as evidenced by this Reddit thread and this article. Some seem to remember it as more of a pink or purple hue, but the red spectrum features prominently in these discussions. Many of these people say that they’ve unexpectedly and embarrassingly discovered the true color behind the name after starting a heated debate with someone, and swearing blind that their red version of chartreuse is the right one.

Seeing as the color gained its name from a green herbal liquor, It’s hard to determine just what makes a percentage of population associate it with shades of maroon and pink. It’s possible that the word “chartreuse” just sounds like it should be a hearty wine color, so that’s what some people’s brains choose to remember it as.

Remember the “Berenstein Bears” children’s books? No, you don’t, because they don’t exist. The bears are — and have always been — actually called Berenstain Bears. This seems like an easy misnomer, in the way that a brain might lazily interpret the surname “Morelos” as a more common “Morales.” However, Mandela Effect enthusiasts have taken this one-letter difference and use it to throw around theories about alternate timestreams.

While the Berenstain Bears are actually named after the authors, Stan and Jan Berenstain, some people have put forward the idea that there are actually multiple parallel realities, and the fact that the bear family’s spelling has suddenly turned from “Berenstein” to “Berenstain” means that we’ve abruptly jumped into a different one than we used to be in. Of course, this theory ignores the fact that the name is simply so easy to misspell that even official bear merchandise sometimes gets it wrong, and even uses both spellings in the same label.

5. What happened to the Tiananmen Square man?

The Tiananmen Square massacre on June 4, 1989 was a tragic and powerful event, but the most enduring image of the day was one of nonviolent resistance: A picture of a single man carrying a bag and fearlessly standing in front of a column of tanks. Unfortunately, the moment after the photo was taken, the tanks pressed forward and ended his moment in the limelight with a small, sad splat.

Except that they didn’t. That’s the Mandela Effect at work, again. There are many theories about the Tank Man’s identity and eventual fate, but no one involved in or present at the event says that he was ran over (though, unfortunately, many others were less fortunate). On the contrary, he repeatedly moved to block the lead tank’s way, and once the tank finally shut its engines, he actually climbed it and had a brief conversation with the driver until bystanders (or the secret police, who knows) pulled him to safety.

Despite all this, there are people who vividly remember that the Tank Man was ran over, and even claim that they saw footage of the incident. There are even congressional records where politicians seemingly refer to the man being run over.

If you Google Lucian Staniak, you’ll find many articles about his horrible deeds: He was an infamous Polish serial killer known as “Red Spider,” and his awful murders drew comparison to Jack the Ripper himself. There’s even a movie based on his murder spree in the 1960s. But despite all these people remembering the man and his terrible crimes, there’s one minor problem: For every source that will happily recount his multiple murders, there is another that bluntly states that the man who some call Poland’s most notorious murderer has never existed at all. So why do people remember him and even count him among the more notorious serial killers in history?

The common consensus among the “Staniak didn’t exist” crowd seems to be that he’s the brainchild of a “true” crime writer — possibly called Colin Wilson — who wrote the first account of Stasiak’s crimes, and apparently no one ever thought to check his facts. Still, it’s strange that it’s almost as difficult to find reliable information about the fictional Staniak’s origins as it is to find solid proof that he actually existed … though the fact that he’s a supposedly infamous killer and doesn’t even have his own Wikipedia page does speak volumes. When evangelist Billy Graham died, it probably came as a surprise to many people. After all, they thought he had already died at least a decade ago, and even remembered watching his funeral on TV. Billy Graham’s televised funeral is one of the most prevalent cases of the Mandela Effect — possibly even more common than fake memories of Nelson Mandela’s death. Most people who remember seeing the funeral progression on their TV place it sometime in the 1990s or 2000s, and the opulent event and the subsequent media coverage was so breathtaking that they even remember discussing it with their friends. Of course, there was no funeral, let alone any media coverage. In fact, Graham was alive and well until his demise in 2018, and even then, the funeral was a fairly modest affair (Though they did offer a live stream).

Mandela Effect enthusiasts have offered several possible deaths that people might have mentally confused with that of Billy Graham, such as fellow evangelists Jerry Falwell and Fred Phelps, Graham’s wife Ruth, or even Charlton Heston or Ted Kennedy. Many Star Wars fans go through a very peculiar Mandela Effect where they suddenly notice that the golden protocol robot C-3PO isn’t totally golden — one of his legs is actually silver. It’s enough to make some people question their programming, especially because even the toys and posters have depicted the robot as completely gold-colored.

Unfortunately for conspiracy theory fans and alternate universe enthusiasts, this particular false memory has a simple explanation. Anthony Daniels, who plays the robot, explains that the leg was always silver (until The Force Awakens, where C-3PO is all gold save for a red left arm). However, it caused some trouble during filming, since it was so bright that it would reflect the gold leg and the desert sand, making it appear golden in many shots. In fact, the silver leg was so unnoticeable that one day, the production’s stills photographer came up to Daniels and asked why he was suddenly wearing a weird silver leg. This was a man who did nothing but taking pictures of the cast all day, and even he hadn’t noticed.

1. Shazaam, the movie that doesn’t exist 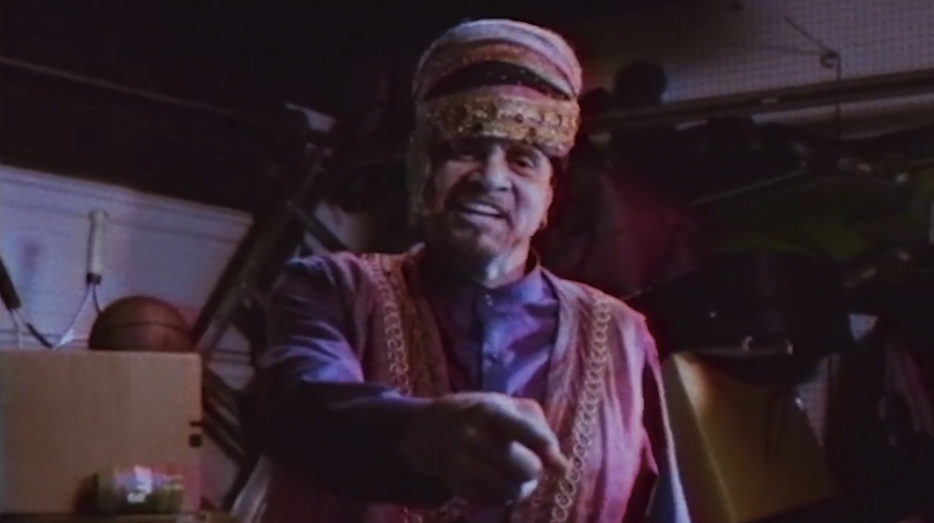 Shazaam is an obscure 1990s movie that featured the comedian Sinbad as a wacky genie of the lamp. A handful of people vividly remember seeing the film, and can even describe its plot, which is fairly unassuming except for one fact: Sinbad has never starred in a movie called Shazaam. No one has, because there is no such movie. There is a 1996 movie called Kazaam, with a very similar premise and starring Shaquille O’Neal as the genie, but the Shazaam believers insist that it’s a very different movie, and even remember thinking that Kazaam was a blatant ripoff of Shazaam when it first came out.

As for Sinbad, he originally tried to shrug off the persistent rumor, and even promised on Twitter that he’ll make a genie movie just so everyone can close this particular chapter in their lives. However, when he saw Shazaam referenced in an X-Files episode, he decided to stop fighting the story, because it had clearly become such a powerful pop culture phenomenon that it was pointless to resist. He has jokingly promised to own up to the movie if a copy ever surfaces — although he does note that if that happens, he will “trip out.”