“For the birds.” That’s a common saying, but prehistoric Earth was home to some birds that demanded some serious respect. These were birds to be reckoned with. Ones that could dip into the ocean and slice up fish with toothy monster bills, while others just ate small horses or made small airplanes their near peers for size. With these facts in mind, let’s go learn the crazy truth about the history of birds.

Terror birds were the top dogs… er, birds… er, animals in South America at a long past point in ecological history. The largest terror bird was, of course, the most dreadful, sporting a massive beak that made modern eagles look like canaries and budgie birds in comparison. Kelenken guillermoi boasted the largest head of any bird to have ever evolved, equipped with a wicked looking hooked beak of unbelievable mass. While the bird itself measured up to 10 feet in height, the head of Kelenken, named after a demon, was over 28 inches in length.

The bird’s remains, discovered in Argentina, paint a scary picture of a bird that would have been faster and more agile than many other terror bird species, with a diet that likely consisted of both scavenged remains and prey killed by either powerful strikes and crushing bites or by seizure with violent shaking to break bones before being smashed against the ground. The enormous weight, sharpness, and size of the Kelenken bill make it legitimately the most fearsome bird bill to ever evolve.

Titanis walleri, a denizen of North America, was one of the last steps of terror bird evolution, and what a terrible feathered monster it was. Titanis walleri was a big bird at eight feet, two inches tall, with a beak that looked like a sharpened excavator bucket. Few mammals targeted by this massive but fast hunter would survive. Given the tendency of us humans to get into conflicts with just about any animal, it’s a good thing for us that we do not have the chance of any interaction with this archaic bird.

The sole terror bird known to have roamed North America, the creature was initially discovered as long fossilized remains lying in the Santa Fe River of Florida. The diet of this 330 pound feathered monster included a variety of mammal species, which were apparently pecked, flung and bludgeoned to death by the massive bird’s combination of strength, size and an extraordinarily lethal decurved bill.

Pelagornis sandersi, translating to “Sander’s Marine Bird,” was the biggest bird to fly above the Earth. Equipped with “pseudo-teeth” somewhat comparable to those of modern day fish-eating ducks (mergansers), the gigantic, somewhat albatross-like seabird had a wingspan the size of a small airplane at 20 to 24 feet.

The fossil find was made in 1983 at Charleston International Airport in South Carolina during an airport expansion project, but waited a number of years to be fully examined and brought to light as a significant paleontological find. The “pseudo-teeth” in the huge bill were formed from bone protrusions that may have been enclosed in a thin fleshy layer. Fish and other soft marine animals likely formed the bulk of the avian sea monster’s diet.

Ponderously sized prehistoric penguins. Not a concept that crosses most bird lovers’ minds at first thought, but an intimidating reality in the history of ancient avians. The archaic penguin species Crossvallia waiparensis was unearthed in New Zealand by researchers who have determined its height at five feet, three inches and a weight of 176 pounds.

The find was made in a river bed in North Canterbury, and was a contemporary of giant ancient birds like the huge Moa species and the Haast’s Eagle. The find was identified as evidence of penguins attaining simply enormous sizes shortly into their evolutionary history. 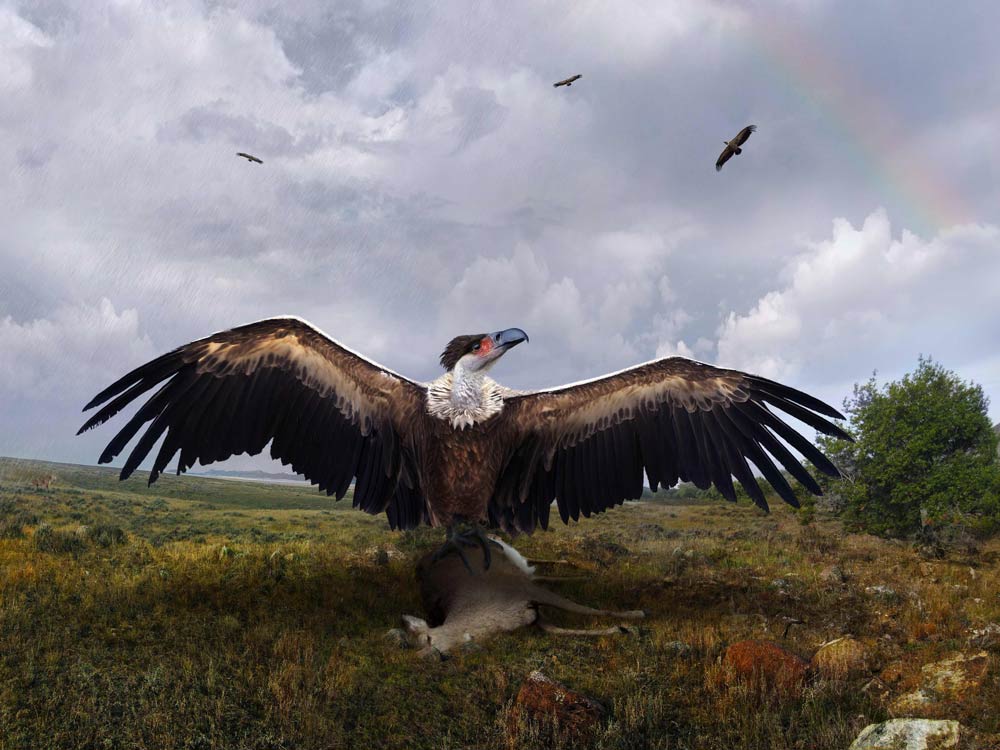 A gigantic North American bird of prey, Aiolornis incredibilis was one of the biggest birds to get airborne in the avian history of the continent. With a 16-foot wingspan, the giant teratorn family member weighed nearly 51 pounds. Largely a scavenger, Aiolornis incredibilis was a gigantic, condor-like bird that fed on carcasses of extinct prehistoric megafauna. No modern flying bird is nearly this heavy or broad in wingspan.

In addition to carrion, a variety of small live prey items were likely included in this monster bird’s diet. A massive, sharp bill suitable for tearing hides distinguished the creature, which is comparable to many large birds featured in ancient legends. On the Indonesian island of Flores, a member of the Lesser Sunda Islands, a humongous prehistoric stork known as Leptoptilos robustus stalked about. The strange part of the story is that the storks, which measured around six feet tall with a weight of 35 pounds, were co-residents of the island with the dwarf hominin primate Homo floresiensis, often called a “hobbit.”

The hominin “youth” would have been vulnerable to predation by the stork, which was huge in comparison to Homo floresiensis. According to researchers, the meat-eating stork was big enough to prey on young Homo floresiensis, being much larger, measuring two and a half feet taller than even the adult “hobbits.”

Giant eagles are the stuff of legend, but New Zealand’s epic landscape of Lord of the Rings fame was really once home to a living monster raptor that rivals anything in fiction. Named in honor of German-born biologist Sir Johann Franz Julius von Haast, the eagle’s genus name, Harpagornis, derives from Greek words that mean “grappling hook bird.” The Haast’s eagle evolved from smaller eagles, which involved birds undergoing what is believed to be a 10 to 15 fold increase in weight.

The bird is most closely related to Australia’s diminutive and aptly named Little Eagle, yet it was the largest eagle that ever lived. The Haast’s Eagle preyed on the enormous extinct Moa of New Zealand, which weighed up 510 pounds and reached 12 feet in height, and is also accused of being an extinct predator of ancient humans. Nearly 40 pounds with an almost 10-foot wingspan, the eagle’s attack force has been compared to that of dropping a concrete block from about 86 feet. No wonder it has been considered the avian equivalent of a lion.

Gigantic and native to prehistoric Australia, the Stirton’s Thunderbird, Dromornis stirtoni, dwarfs modern Australian fauna. It even would have made modern kangaroos and those famous big birds, the emus, look small. The gigantic, massive-billed bird was intensely muscular, with a diet that is still up for debate among paleontologists. Known from just one location in Australia’s Northern Territory, the bird was 10 feet tall and weighed in at 1,100 pounds.

Stirton’s Thunderbird was named in honor of paleontologist Ruben A. Stirton by discoverer Patricia Vickers-Rich. Being a flightless bird, its legs and bill were highly developed, while the neck was long and muscular. Furthermore, the wings were reduced to tiny remnants of regular avian wings. Often nicknamed a type of “demon duck,” the bird is part of a family that is somewhat related to modern waterfowl.

Imagine a bird that looks like a cormorant or loon but is equipped with plenty of teeth, tiny vestigial wings, and is about the size of a human. Quite an intimidating seabird! Hesperornis genus members inhabited a range of ocean environments in North America and Asia, with the name of the creature translating to “Western bird” in English. Measuring approximately 5.9 feet in length, Hesperornis weighed 20 pounds and was an accomplished diver, more than making up for its flightlessness.

The scary part about Hesperornis is its dentition. Not only was the bird’s bill long and pointed, the teeth were plentiful and lined the bill, ensuring a firm grasp on prey once captured. The bill featured a locking mechanism consisting of an indentation in the bird’s upper palate. The birds were awkward on land, being unable to walk, simply hauling out in colonies to breed. The rest of the time, the birds swam, dove and floated around, being wary of predators such as sharks and plesiosaurs and hunting down fish and ammonites. Enormous landbirds, Gastornis represented a genus of monster avians that have been dug up in China, England, Belgium, Germany, France, and the United States. Hailing from the Paleocene to Eocene eras, genus members could reach over six feet in height. Gastornis gigantea of North America was previously classified in the genus Diatryma, a name under which the bird gained significant notoriety in popular culture and prehistorically inspired art.

Many depictions showed the giant birds eating diminutive wild horse ancestors known as Eohippus, while in reality, the real birds behind the myth, G. gigantea was more of a seed eater, according to National Geographic. Nevertheless, the huge birds would have been a truly terrifying sight for a hypothetical ancient hiker to encounter.