The term “ancient” has become increasingly relative in today’s ever-shifting, modern world. After all, it wasn’t that long ago when apps meant appetizers, phones were only used for talking, and Alexa was just someone’s annoying kid sister.

But none of our technological wizardries would have been possible without the steady advances made by our persistent pioneers of the past. Here’s a look at some of the oldest civilizations in history whose glorious contributions now allow us to order a pizza and watch a movie with the mere touch of a finger. Amen. 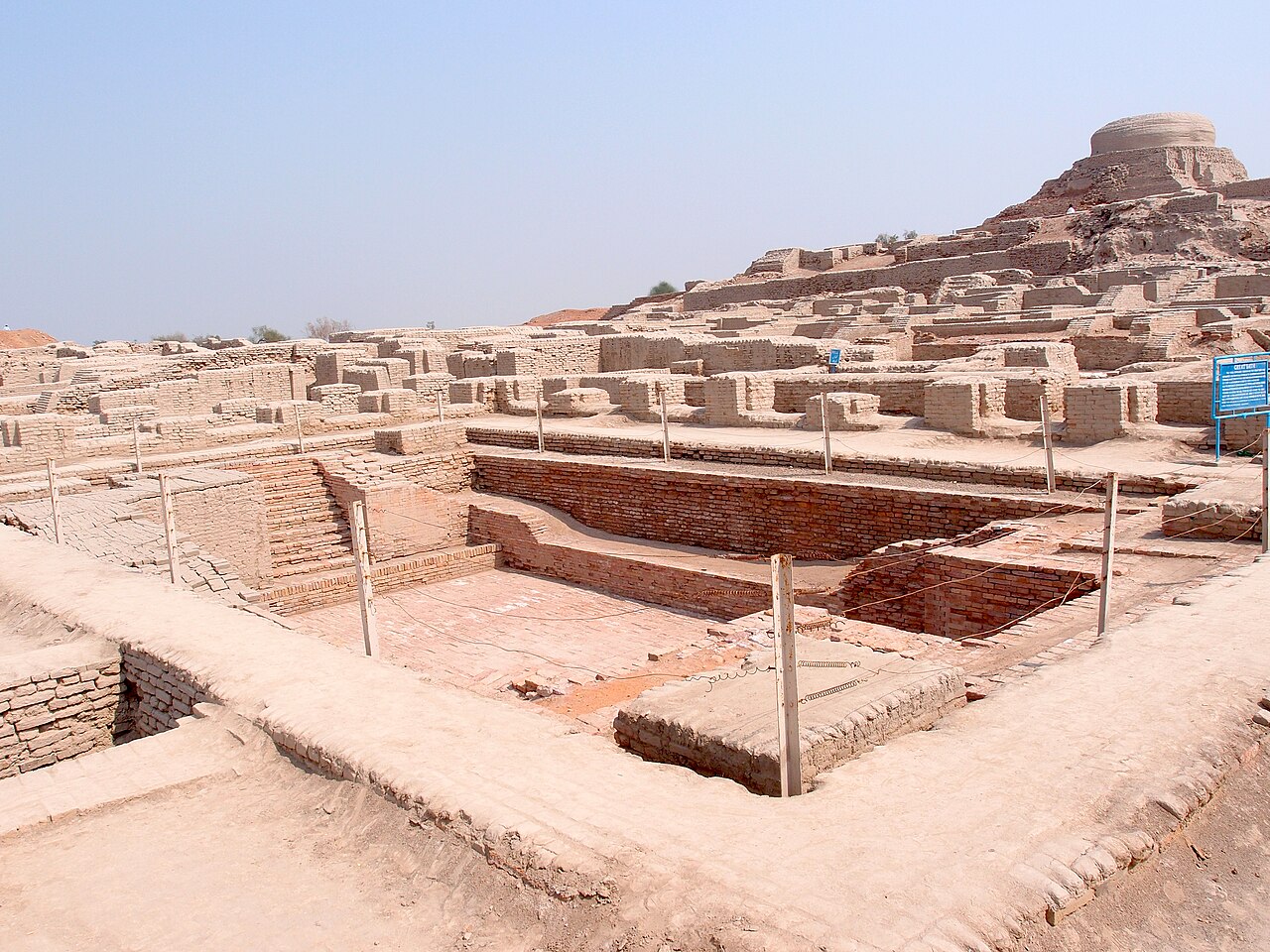 In 1856, British engineers discovered a large cache of evenly-cut, fire-baked bricks while constructing a railway in colonial India. The workers continued to build over the site, unaware they had unearthed ancient artifacts from the lost city of Harappa. Subsequent excavations in the 1920s confirmed that the area once formed part of the Indus Valley Civilization, a sophisticated Bronze-age society spread across parts of modern-day Afghanistan, Pakistan, and northwest India.

Inhabitants of the Indus River Valley (also known as the Harappan Civilization) began cultivating the region around 3300 BCE and flourished for nearly 2,000 years. During that span, they exhibited meticulous planning and expertise in the use of standardized weights and measures and produced skilled artisans in the field of metallurgy.

At its peak, the South Asian dynasty consisted of more than one thousand cities and settlements, such as densely-populated centers in Harappa and Mohenjo-daro. These communities are noted for their elaborate urban design, ample supplies of freshwater, and efficient drainage systems. Carefully measured and interlocking mud and clay bricks, which were moisture-resistant due to natural tar, provided the foundation for durable, well-made houses and buildings.

Archaeological evidence indicates that reduced trade with Mesopotamia — possibly from climate change — hastened the demise of the all but forgotten Indus Valley culture. Also, the excavations revealed a conspicuous lack of weapons, suggesting they would have been ill-equipped to defend themselves against the standard operating procedure of rape, pillage, and plunder by invading forces. The windswept island of Santorini is famous for its white-washed buildings, blue-domed churches, and dazzling sunsets. The popular travel hot spot is also the site of one of the most destructive volcanic eruptions in recorded history. The cataclysmic event — combined with a hostile takeover by the Mycenaean Greeks — would result in the eventual downfall of Europe’s first advanced civilization on the nearby island of Crete.

Minoan culture originated during the Neolithic period (c. 7000 BCE) before gradually expanding throughout the region as a dominant power. Noted British archaeologist Sir Arthur Evans, named the empire for the Greek mythological deity, King Minos. The island’s strategic central location allowed the Minoans to establish a seafaring empire based on trade that included ports in Greece, Sicily, and Egypt.

Among the vast archaeological findings made by Evans was the discovery of the Minoan writing system — Europe’s first written language. Over 3,000 clay tablets and seals were found featuring three distinct forms inscribed on horizontal lines. Although experts have only been able to decipher a small portion of the surviving texts, the language later emerged as an early form of ancient Greek.

Sometime around 1600 BCE, an active volcano on Thera (today’s Santorini) released the same energy as several hundred atomic bombs. The explosion decimated Crete with tsunamis 40 feet tall and spewed volcanic ash as far away as China. Centuries later, the epic natural disaster would inspire the legend of Atlantis as well as tales in the Bible, including the Moses-led exodus from Egypt. Comprised of independent city-states and ruled by a monarchy, Phoenicia sprang from what is now Lebanon to become a major maritime power. The Phoenicians were renowned as sailors, shipbuilders, and traders. They also made a fortune with their monopoly on a rare purple dye made from the Murex snail, used exclusively for royal clothing. Ultimately, the Middle Eastern empire would make an even more indelible mark on the world by formulating the first phonetic alphabet.

Beginning around 1550 BCE, the Phoenicians held a dominant position along the coastlines of the Mediterranean Sea. Alexander the Great would ultimately hasten their demise by conquering the region in 334 BCE, but the Phoenicians’ influence had already become well-entrenched.

The Greeks initially adopted the Phoenician writing system in the 9th century BCE that featured a script consisting of distinct letters for vowels and consonants. Later, the Romans used a similar format for the development of Latin. Ironically, the Phoenicians themselves were mostly silent regarding their history, possibly because they wrote on perishable materials, such as papyrus or animal skins. Well known for their technological prowess and advancements in architecture, mathematics, and philosophy, the Ancient Greeks are also responsible for introducing oral and written poetry to the world. This art form would later spawn the arrival of theater — and eventually the wonder of movies and TV — providing an invaluable escape from the tragic comedy called life.

The epic works attributed to the Greek poet Homer are usually considered the first extant work of Western literature and date back to the mid-8th Century BCE. The Iliad, which recounts key events of the Trojan War, Homer explores various themes such as love, loyalty, perseverance, and revenge.

While the names of philosophers Socrates, Plato, and Aristotle would leave behind a more enduring footprint, humankind is equally indebted to the trailblazing Greek playwrights, Aeschylus, Sophocles, and Euripides. The legendary dramatists invented the use of dialogue, developed irony as a literary technique, and challenged social norms in their plays — many of which are still performed today. Bravo. Towering over the west bank of the Nile for some 4,500 years, the massive Pyramid of Khufu at Giza is the only remaining structure of the Seven Wonders of the World. The astounding engineering feat is just one of many Egyptian legacies, which also includes empowering more women than any other culture in the ancient world. Furthermore, their pantheon boasts hundreds of female deities, including Bastet, the highly revered feline goddess — an irrefutable fact your house cat has never forgotten.

In terms of gender equality, Egyptian women were highly respected and enjoyed many legal rights, not typical of the era. Cleopatra’s extraordinary life easily ranks as the best-known chapter in Egyptian history, but the reign of a female pharaoh 14 centuries earlier stands as one of the most successful.

Hatshepsut (meaning, “foremost of noblewomen”) authorized several ambitious building projects during her 22-year rule that included the great temple at Deir el-Bahari at Luxor. She added significantly to the state coffers by overseeing a significant expansion in trade, establishing lucrative routes to the Horn of Africa that yielded valuable and exotic goods, such as gold, ivory, and spices.

The shrewd leader also relied on her charisma, uniqueness, nerve and talent to carefully mould an image of a traditional masculine pharaoh, replete with full royal regalia that included a fake beard held in place by a ribbon tied over the head and attached to a gold chin strap. The unisex application of black eyeliner completed the polished appearance, a look adopted by rock stars and goths still going strong today. “All roads lead to Rome” is a familiar metaphor, meaning all actions eventually lead to the same place. But at the peak of the Roman Empire — the mightiest power ever seen — the phrase took on a literal connotation.

Rome would become the most important city in the known world from its modest origins on the banks of the Tiber River. A vast network of marked roads and bridges made travel possible for military troops, captured slaves, and plundered goods across a dominion that covered most of continental Europe, Britannia, northern Africa, and western Asia.

The ability to connect east and west cultures also resulted in an invaluable wealth of knowledge. This know-how, combined with extensive manpower and resources, allowed the Romans to improve and expand on a much larger scale, building grid-based cities that featured sophisticated architecture, sewage systems, and aqueducts.

Another prime example of Roman heft, the iconic Colosseum of Rome, served as the largest amphitheater ever built and held more than 50,000 spectators. Inaugurated in 80 CE, the arena hosted gladiatorial combat, prisoner executions, and even mock sea battles. The universally acknowledged “Four Great Inventions of Ancient China” refers to paper, gunpowder, printing, and the compass. As a result, the development of these technologies forever revolutionized world civilization by allowing humankind to explore new lands, kill more people, and document it for posterity.

Presumably, most cultures would be content with such an impressive legacy and rest on their laurels. Not the Chinese. They’ve also been credited with innumerable other inventions ranging from the crossbow to toilet paper and were the first to record observations of solar eclipses and comets. However, with regards to sheer size (and a blatant display of just plain showing off), the Great Wall of China remains a jaw-dropping architectural triumph.

Contrary to popular belief, China’s most popular tourist attraction consists of many different bulwarks — and not one long continuous wall. Construction began in the 7th century BCE  and would take over two millennia to finally complete.

Various Chinese dynasties developed the border fortifications as a means of protection from not-so-friendly neighbors as well as barbarian invasions. Results were mixed. In the end, the meandering barricade’s total distance stretches a whopping 22,000 kilometers (13,670 miles), making it the longest structure ever built. The word Mesopotamia means “the land between rivers,” referring to an area near the Tigris and Euphrates Rivers found in present-day Iraq. Here, people first gathered in mass to form large cities while learning how to write, cultivate crops, and create governments — thus earning the title, “Cradle of Civilization.”

Mesopotamia is also known as the Fertile Crescent, the boomerang-shaped region of the Middle East where agriculture and the domestication of animals initiated around 10,000 BCE. Several mighty civilizations would rise and fall, starting with the Sumerians. Over time, the long cast of characters featured the Akkadians, Babylonians, Assyrians, and Persians.

While the Sumerians are typically credited with inventing the wheel — and scripting the oldest surviving beer recipe — an obscure, semi-nomadic group of hunters and gatherers called the Natufians can now claim the honor of being the first to brew the world’s favorite alcoholic beverage.

In 2018, a research team led by Professor Li Liu of Stanford University discovered traces of an extensive 13,000-year-old beer-brewing operation in Haifa, Israel. The archaeologists later analyzed residues from stone mortars found in the Raqefet Cave, a Natufian graveyard site — suggesting that the Natufians brewed beer for ritual feasts to celebrate the dead. “This accounts for the oldest record of man-made alcohol in the world,” Liu said.

So the next time you quaff down a thirst-quenching lager or a super hoppy IPA, be sure to pay tribute to those responsible for making everything from watching your team win to rioting afterward that much more enjoyable.