Covert weapons have been a part of warfare for as long as we can remember, though till recently, they were largely restricted to untraceable poisons found in nature or basically-assembled booby traps. It wasn’t until the Second World War – when espionage was established as a distinct military discipline – that covert weapons became as deadly as they are today.

Some of the most effective covert weapons in history have proven to be as effective in achieving military goals as any conventional weaponry, and unsurprisingly, a lot of them are from the Cold War era. From the heart attack gun to nanobots to the lipstick bomb, here are our picks for the deadliest covert weapons ever developed.

Made by RF Sedgley, the glove gun was a single-shot, 0.38mm barrel-mounted gun attached to a glove. It was built with a plunger that extended beyond the muzzle whenever the wearer made a fist. As you can guess, the plunger released the cartridge whenever they punched someone with it.

If it sounds like a far-fetched idea, it really wasn’t, as the US military actively built and issued it to their Navy personnel fighting in the Pacific Theater throughout WW2. While we don’t know how many of these were ever used in combat, we know that only 50-200 of them were ever issued.

Espionage is risky business, and a major part of a spy’s training consists of what to do when they’re caught. From the more defeatist ‘swallowing poison and dying’ to fighting it out, different intelligence agencies have different protocols for their operatives if they’re ever compromised. One of the more outrageous – as well as ingenious – of those was devised by the CIA in the ’60s – the rectal kit.

It was exactly what it sounds like; an all-purpose kit that could be hidden in the rectum during high-risk missions. It had all the tools required to escape captivity, including saws and knives. It took some craftsmanship to develop, too, as it had to be made with materials that didn’t splinter or form sharp edges. While details of its use are classified, we know that it was extensively issued during the Cold War. 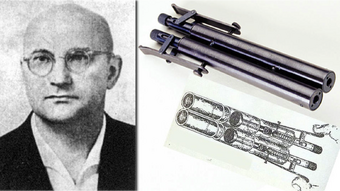 Just like the CIA, the KGB was building its own arsenal of covert weapons throughout the Cold War. Some of them were so effective at being ‘covert’ that if it wasn’t for defectors or leaked intelligence, we’d probably never know they existed.

One particularly deadly example was the cyanide gun; a single-barreled aluminium air gun repurposed to fire a small cyanide pellet through a mesh screen. We first heard about it from a Soviet defector called Bogdan Nikolaevich. He had killed two Ukrainian nationalists with it years ago, though both the deaths were attributed to different reasons at the time – one as a suicide, and the other as a heart attack. While we may never know how many times it was used in the field, for a weapon so effective at avoiding detection, we’re guessing ‘a lot’. The ‘coal bomb’ was extensively used by the Confederacy during the American Civil War, as it was quite effective at its job. Made with a small torpedo or mine filled with gunpowder and enclosed inside an iron casing, it was then covered in beeswax, pitch and coal dust. That made it indistinguishable from a regular piece of coal, which was then planted into one of the many Union coal-refueling stations by Confedery saboteurs.

When it was accidentally loaded into the firebox of a vessel, it would cause an explosion and damage the boilers, which was enough to incapacitate most ships at the time. It was designed by an ex insurance Thomas Edgeworth Courtenay, who was quite aware of the damage a ruptured boiler on fire could do to a steam vessel.

We don’t know the exact number of vessels downed by the coal bomb – as the details of espionage activities by the Confederacy were destroyed or classified after the war – though we do know that it was quite effective. One of its targets – the gunboat Chenango – exploded in the New York harbor in April 1864, killing 23 people.

One of the primary problems with carrying out assassinations is that you need to send someone to reliably the job. The Israelis are clearly having none of that, and have decided to take a new, remote approach to getting rid of their sworn enemies – everyone that has anything to do with the Iranian nuclear program.

Mohsen Fakhrizadeh – a leading Iranian nuclear scientist – was recently killed by a satellite-controlled machine gun while he was travelling with his wife in his car. While the car was bullet-proof, he had to stop and get out to check what sounded like bullets. As soon as he did, the machine gun – parked about 150 meters (164 yards) away and mounted atop a Nissan pickup truck – opened fire. It was reportedly so precise that it just killed Fakhrizadeh and not his wife, following which the truck promptly self-destructed to erase any trace of the attack.

The lipstick gun is another secret weapon that we only know about because of it being caught in the field. It was found in the possession of a KGB agent trying to cross from East into West Germany in 1965, and to this day, that remains its only specimen we know of.

It’s pretty much exactly how it sounds. Used by female KGB operatives, the gun was made to look like a functional lipstick from the outside, with a 4.5 millimeter single shot gun hiding inside. While we haven’t ever recovered other copies of it, we’re assuming that it was widely deployed by the Soviets during the Cold War, simply because of how potentially effective it can be in the right hands.

When Georgi Markov – a defector from Bulgaria at the height of the Cold War – felt a sharp pain on his thigh while going to work in London back in 1978, he turned around to find a man fumbling with an umbrella, apologizing, and hurrying back into a cab that quickly drove him away. While he didn’t know it yet, he had just been assassinated by what would eventually become one of popular fiction’s favorite spy weapons – the Bulgarian Umbrella.

He died four days later from ricin poisoning, and a medical examiner discovered a pellet less than two millimeters in diameter inside his leg. Based on his account of the mysterious man with the umbrella from a few days ago, the investigators were able to reconstruct a working design of the weapon, which has since been copied and used in movies and books ever since.

Again, like all effective covert weapons, we may never know how many times it was actually deployed in the field, though looking at its efficacy and simple design, we can guess that it must have been pretty often.

A 1975 Congress investigation into the operations of security agencies revealed that they didn’t just manage to develop it, but also improved on the design. The CIA’s version could be made with any gun, though the model found by the Church Commission – named after the senator that ordered the investigation – was fitted inside a regular Colt 1911.

Instead of a bullet, it fired a dart filled with a poison designed to penetrate the skin, enter the bloodstream and mimic a heart attack. All it left behind was a small red dot, which was impossible to detect unless you were looking for it.

Weapons based on microwaves work on the same principle as a typical microwave. They’re theoretically able to heat up the water inside the body of their targets, causing them immense pain and discomfort until they retreat. There’s also plausible deniability, as such a weapon could be deployed from a distance without being traced.

While many countries are rumoured to be working on their own versions of microwave guns, China may just be the first one to have actually deployed it on the battlefield.

In the recent standoff between China and India in the high-altitude Ladakh region of the Himalayas, unofficial reports spoke of a mass wave of vomitting and induced nausea among Indian troops. According to a Chinese professor quoted in the British daily The Times, it was thanks to China’s new arsenal of untraceable microwave weapons that can turn an entire region into a giant oven.

While it’s true that the Cold War saw the development of some of the deadliest covert weapons we know of, none of them match up to what all we’re developing for the future. As war becomes more asymmetric and irregular than ever before, the future of covert warfare lies in advanced AI drones, remote-controlled robots and untraceable cyber attacks.

The scariest of them, though, has to be nanobots, which can be used to carry out pretty much any type of mission you want. Imagine a unit of microscopic-yet-deadly robots that could assemble and detonate nukes, attack specific military personnel or politicians with deadly diseases, modify military weaponry at whim, or simply take a call on what to do on their own with AI and machine learning. It’s the ultimate covert weapon, and it’s not in the distant future anymore, either.

Quite a few recent developments in nanotechnology – like the recent breakthrough where tiny medical bots were able to specifically target and destroy tumor cells – suggest that the technology is already advanced enough to be used militarily.