When most people find out what bioluminescence is, the first thing they associate it with is  firefly butts, but the world has way more interesting life with built-in flashlights than beetles that use it to get nookie. And while we may not have glowing redwoods like Pandora, we do have the following.

If you’re like me, the word “mushroom” conjures up things like pizza and Mario power ups, but it turns out there are a few species that glow in the dark. The ones pictured above are Panellus stipticus, and they glow bright enough that it is visible even in low light (as opposed to pitch black.) You can even buy some glow-shrooms and grow them yourself. Most species don’t glow as brightly as stipticus, and the glow can only be seen under a microscope or in pitch black, but Panellus looks like you could read by it. (Note, you can’t actually read by it). 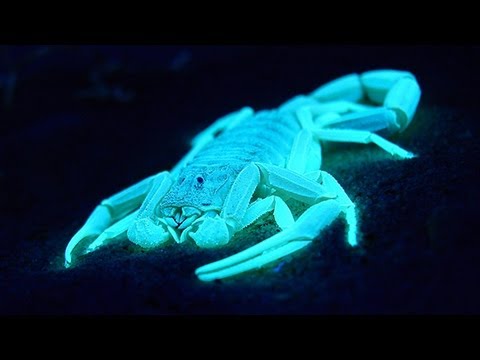 Okay, so I am cheating with this one. Scorpions don’t actually generate their own light, like the mushrooms, but they glow under a blacklight like a raver who fell in blue neon paint. They have a chemical in their exoskeleton that flouresces under ultraviolet light, taking them from “terrifying land-lobster with a poison butt” to “I want one that turns into a robot for Christmas.” 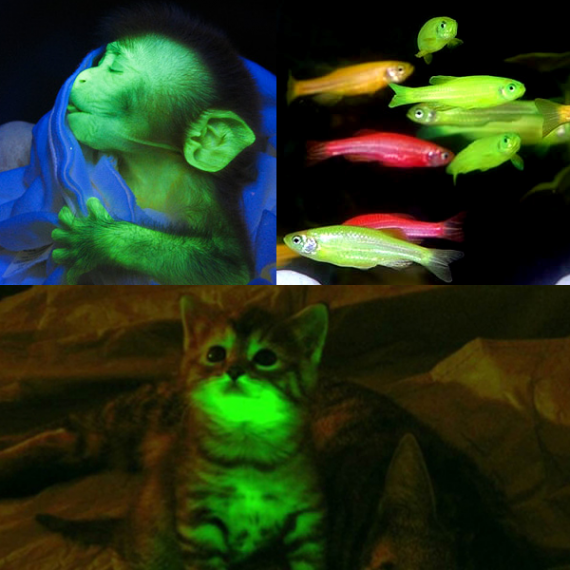 Monkeys and kittens and glowfish, Oh My! Scientists have developed a love affair in the past half decade for something called GFP, or Green Fluorescing Protein. It’s kind of like asbestos used to be, that is to say, it’s being put into a lot of stuff which may or may not decide to kill us all one day. Scientists have been using it as a genetic marker for studying everything from genetics to making fish that alert on pollution (the original intent behind the world’s most popular genetically enhanced house-pet, the glofish).

The protein originally comes from a form of bioluminescent jellyfish, which should make you feel better because nothing about monkeys crossbred with an animal armed with millions of poisoned harpoons is terrifying.

Hey, guess what? There are creatures that live in the deep sea that aren’t pure terror, and the Firefly squid is one of them. It’s body is covered in photophores, light producing cells, which allow it to glow in any pattern it wants. They light their undersides during the day, matching the pattern and dimness of the light coming from the surface. This allows them to camouflage themselves against the light. They also light up their entire bodies during mating season, because… I guess they get turned on by flashbulbs. That may be why they only live a year.

Tracking down information on this thing was hell, there is next to nothing about it online, but it turns out they are common enough to be well known by the locals in Thailand. There is a video of one crawling around and at the beginning, you can see its glowing tuchus right through a piece of cloth. The beetle appears to be about 3 inches long, and according to the YouTube description, they could see it glowing in the dark easily from 100 meters away; that is more than the length of a football field.

Literally every search I did for “glow” brought up these caves. The glow worms, the larva of a type of gnat, line the ceilings of the aptly named “Glow worm caves.” They dangle lines of glowing mucus, up to 70 per worm, to snare flies and moths to eat. And in some species, their glowing snot lures are poisonous! Isn’t it nice that nature could make something so pretty, yet so thoroughly awful? Find out more about visiting these caves.

I can’t look at these things without hearing Jim Carrey say “I got worms!” in Dumb & Dumber, followed by Lauren Holly’s horrified look, and I have researched the hell out of them on multiple occasions. Terriswalkeris is a 6 foot long blue worm from Australia that leaves behind a trail of glowing mucus. It looks like a giant gummy worm, and although it is from the land Down Under, it is surprisingly not poisonous; the worst it could do is scare the crap out of you. The North Auckland worm is similarly sized and hails from New Zealand, which is apparently a Mecca for glowing worms. These are even more rare than the Aussie Gummy, and apparently glow so bright that you can read by worm-light! The sad news is is that they are exceptionally fragile, and the act of picking one up is apparently plenty to kill them. 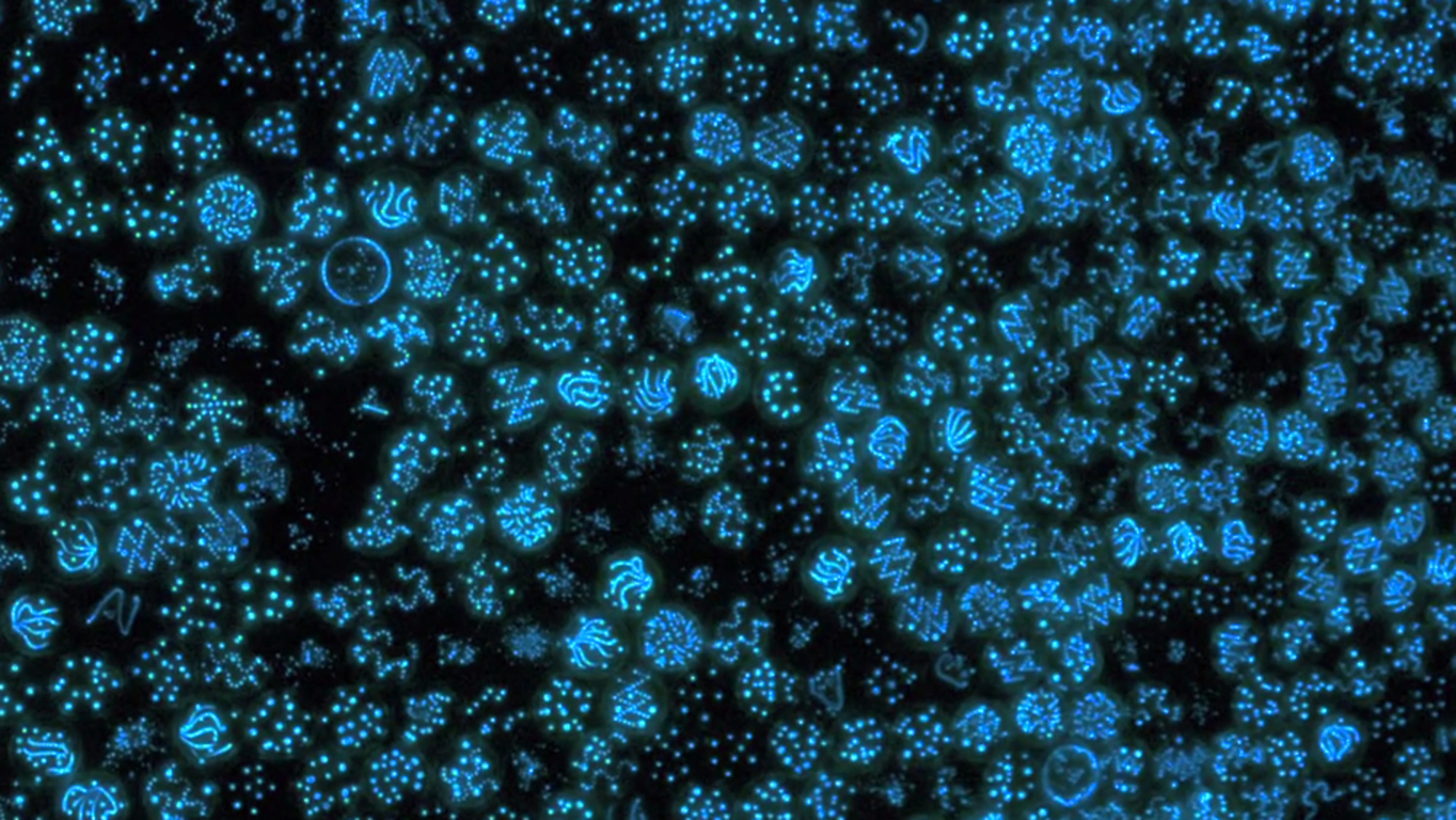 Here’s a fun fact, a large number of bioluminescent animals are actually just vessels for bacteria that produce light. Animals like lantern fish and certain types of shrimp are home for entire colonies of brightly glowing bacteria. This site has some nice instructions on how to extract and grow the bacteria from shrimp and squid, in case you have some deep sea creatures kicking around and wanted to make the most appealing lava lamp in your neighborhood. Do you remember the GFP mentioned a few entries back? Well, these are the jellyfish they got it from. The species pictured lives around North America, although the original critter they have been reproducing the protein from is Asian, they appear to be just about the same animal. They are nearly invisible when they aren’t glowing, but the good news is that they are small and won’t be sending you to the hospital like a box jellyfish. They are apparently content to drift around and lend their genetic material to scientists who will stuff it into just about anything cute and/or fuzzy. Although, they likely just don’t care because they are jellyfish.

Dinoflagellates are most often heard of when people talk about red tide, because these protozoans are responsible for that terrifying mess when it shows up. These dinoflagellates also cause red tide, but they glow when disturbed, by swimmers, or even waves, and it is amazing to look at, so we’ll forgive them. Also, they don’t appear to produce too much toxin, so, you know, that’s good. I have never seen them with my own eyes, but the pictures alone are enough to shut me up and just stare