One of the great things about globalization is that no matter where you go, you can always find a piece of familiar Americana there to protect your senses from all the foreign devilry going on around you. Nowhere has it ever been more evident than with fast food joints. Today McDonald’s restaurants can be found in the deepest, darkest corners of the planet, making sure American tourists never open themselves to new tastes and experiences. Or rather, you hope that it’d be the case. Sadly, nowadays McD’s have forgotten their proud roots and embraced new cuisines and cultures driven by ridiculous things such as market penetration, common sense and profits. This produced a bunch of unfamiliar, international McMenu items like: McDonald’s introduced the KiwiBurger in New Zealand back in 1991 and since then the sandwich has been the Futurama of fast food. No, not because it was a really well made sandwich with a large, loyal fanbase, but because it kept getting cancelled. It was slated for a final cancellation in 2009, but what really became of it is anyone’s guess, as you can still allegedly find a couple of places that carry it.

And why not, just check out what goes inside it: beef, tomato, lettuce, onions (off to a great start), beetroot (gha?), egg

(really?) and of course kiw… What? There’s no actual kiwi fruit in this? Really? Huh. But it’s called KiwiBurger, right? Oh man, I just know this is offensive in some way but I can’t exactly explain why.

From: parts of Canada, New England

Admittedly I am cheating a little because you can get the McLobster in the US, but I think we can all agree that New England hardly counts as part of the United States (it even has “England” in the title!)

The McLobster, as 3 months of tiresome research on my part have shown, is a lobster sandwich. Its primary ingredients are lobster and bread. The sandwich has actually been around for a couple of years and at one time there were even plans to introduce it to restaurants nationwide. But then the cook at McDonald’s HQ ran out and someone realized that it would impossible to convince Middle American landlocked states that their “lobster” isn’t actually 2 weeks old or really made from ground up homeless guys. 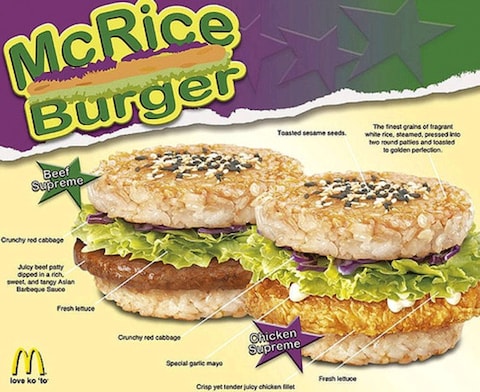 In another example of how McDonald’s international menu items are clearly thought up by 10 year olds, here’s the Asian rice burger. No, it’s not rice between two pieces of bread. That would be silly. It’s rice formed into buns with beef or chicken between them, which makes a lot more sense. You know how people are always complaining that you can’t eat rice with your hands.

This sandwich is actually quite popular in Taiwan and just like the McLobster there have been plans to maybe make it a permanent McMenu item. But that will of course never happen. If you can convince an American to eat rice without beans in it then CALL THE COPS because he’s clearly a communist spy! You know, there’s lots of talk about pain and suffering going on around the world, but the one tragedy that is often neglected is how some folks can’t enjoy a good ol’ slab of fried beef with bread due to, say, religious reasons.

It is with such people in mind that McDonald’s has invented the McShawarma for the Israeli market. It’s one of the country’s kosher menu items, and consists of turkey shawarma in pita bread. But isn’t it still basically meat in a type of bread? Well, yes, but the main difference here is that the meat is barbecued, not fried, without any of that sweet, heart-molesting McDonald’s fat. In other words: a sham and an abomination. 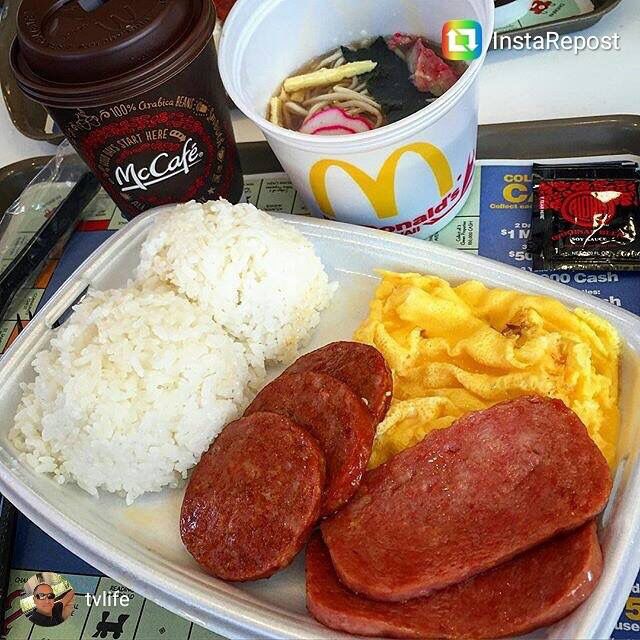 In 2002, 78 restaurants in Hawaii started to test out dinner sets consisting of rice, spam and eggs. Though Spam might very well have a case in mainland US to soon be recognized as a synonym of “pig lips and anus” it’s actually quite popular in Hawaii, so it probably doesn’t seem all that weird to them. Still, we’re talking about the place where guys used to wear grass skirts, so take that for whatever it’s worth. 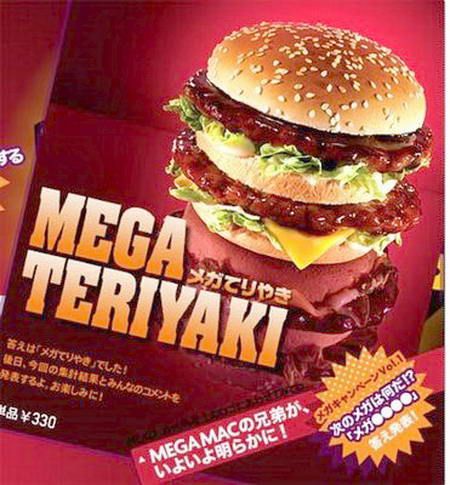 And that’s how we got the Mega Teriyaki. Essentially a Big Mac swimming in the sweet, dark, teriyaki sauce and mayo, it’s the only known sandwich in existence which comes with a side order of fries, nuggets or a prefilled Last Will and Testament. OK, that’s obviously not true, but it should be. 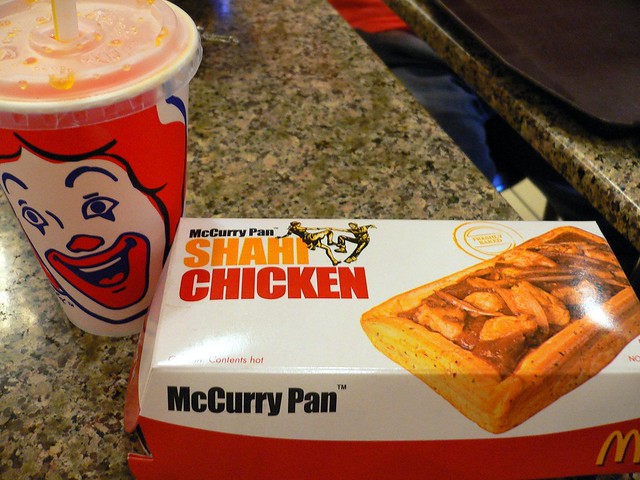 McDonald’s is the world’s largest buyer of beef. In India the cow is considered holy. You’d think that the two would be about as compatible as a sack of toddlers and a barrel full of battery acid, but dammit people, there are profits to be made and gold-filled swimming pools to be bought! Say hello to the McCurry Pan.

The McCurry Pan is an original, surprisingly complex McCreation made especially for the Indian market. It’s a crispy bread box of sorts (as in, a box made out of bread) filled with a creamy sauce of mushrooms, broccoli and bell peppers (there also exists a chicken version). Not only does it look awesome, it also actually consists of real vegetables, while back in the US it took months of negotiations before all of us begrudgingly accepted onions and lettuce in our fast food. I actually kinda feel bad for mocking the McCurry Pan and would really like to try it…

Bam! I think I am getting a hang of this whole McDonald’s marketing mentality.

All the way back in 1997, which was 14 freaking years ago people (Gosh, we’re old) McDonald’s introduced the salmon sandwich in Norway to some initial success. Unlike their regular fish sandwich, the McLaks was meant to be more regional, healthier and lower on fat, meaning that there actually used to be a large Norwegian demographic which went looking for healthy foods at McDonald’s. But they got what was coming to them when the sandwich was discontinued after giving a whole bunch of people food poisoning. I still can’t decide whether that is hilarious or just a little funny. 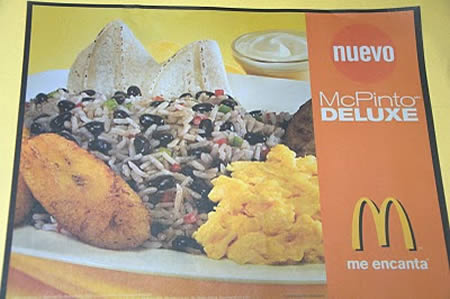 Not everything has the honor to be called your national dish. Every food item with a claim to such a title has to be rooted deeply in the history and culture of the country it comes from, capturing its essence inside one, tasty, edible package which should be treated with the respect it deserves. Then there’s Gallo Pinto, Costa Rica’s national dish which you can get at their local McDonald’s.

The dish itself is very simple. Basically, it’s fried rice and beans, eaten primarily for breakfast. The McD version is also served with scrambled eggs and sour cream. Man, who said that national heritage cannot be streamlined, packaged and distributed by a multinational conglomerate? Actually it was me, but what I really said is that it “shouldn’t be.”

Yeah, noticed how this article wasn’t titled the Top 10 Foreign McDonald’s Sandwiches? Hell, even if it was, I would still totally mention this thing because… No, seriously, McDonald’s offers weddings in Hong Kong! What the what? Oh Boy, I know what this is, I died and went to Hack Comedian Heaven where easy targets like this actually exist. Dammit, I bet I died on the toilet too…

Two things that we have to make clear are that McDonald’s restaurants have a generally better image in Asia than in the West and that weddings there are also insanely expensive. Put two and two together and you end up with the McWedding instead of four (that’s the magic power of Asian math, which is better than white people math). The wedding receptions offered by McDonald’s take place in one of their restaurants as the couple and their guests feast on burgers, fries and shakes. Stacks of apple pie act as the cake. No, really.